Back in the early ’70s, shortly after the Nixon administration first re-opened communication with China after decades, the Central Intelligence Agency found itself serving as a go-between for Dr. Henry Kissinger and various figures in government who wanted to shape upcoming negotiations. A memo released through CREST shows that one of the most persistent of those was the Navy’s Admiral George Whelan Anderson, who really wanted Kissinger to ask the Chinese what it was like to be blasted by Soviet lasers.

The Agency’s apologetic tone is obvious from the start, with Director William Colby making it abundantly clear that he knows Kissinger has better things to do than read about laser beams.

That said, if the topic did manage to come up in the flow of conversation, and the Chinese did indicate that they were indeed zapped …

then the CIA did have some rather specific points of clarification, down to what color of a laser beam we’re talking about. 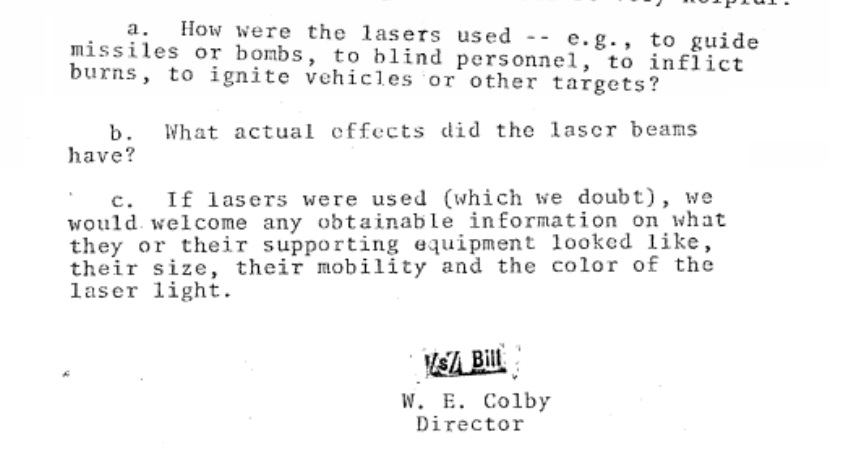 While there’s nothing in the files to indicate whether or not Kissinger managed to sneak the laser question into his next chat, an attached routing slip indicated that the agency hoped a heavily sanitized version of this memo sent to Anderson would at least get him to shut up for a while.

Read the full memo embedded below.