In the 2008 epilogue to his book Oswald and the CIA, John Newman begins with a relatively simple fact and ends with a conclusion that not only reaches far beyond the evidence - it contradicts it.

It’s reasonable to be perplexed and ask questions about the apparent Oswald impersonator. It’s reasonable to point out the Central Intelligence Agency’s determination to avoid being dragged into World War III by suspicion Oswald was working for the Russians and that a memo written days after the assassination declared the need to convince the public that Oswald acted alone and not as part of either a Communist or right-wing conspiracy. Newman becomes unreasonable, however, when he uses this as evidence of a massive cover-up premeditated weeks in advance by none other than CIA counterintelligence chief James Angleton.

While most conspiracy theories aren’t worth individually debunking, this is worth notice both because of the extensive citations in Newman’s 600+ page book, his background in intelligence, and his history professorship all lend his reporting an air of authenticity. This debunking of his concluding speculation isn’t meant to denigrate his work, or address the full text of Oswald and the CIA, but only the conclusions Newman offers in the epilogue and elsewhere. Newman, for his part, has the clarity to call these conclusions what they are - speculation. Yet it is because his speculation is respected by so many readers that it bears addressing. Newman’s concluding thoughts can be summarized in the following excerpt:

It is now apparent that the World War III pretext for a national security cover-up was built into the fabric of the plot to assassinate President Kennedy. … The person who designed this plot had to have access to project TUMBLEWEED, the sensitive joint agency operation against the KGB assassin, Valery Kosikov. … In my view, there is only one person whose hands fit into these gloves: James Jesus Angleton, Chief of CIA’s Counterintelligence Staff. … No one else in the Agency had the access, the authority, and the diabolically ingenious mind to manage this sophisticated plot. No one else had the means necessary to plant the WWIII virus in Oswald’s files and keep it dormant for six weeks until the president’s assassination. … The only person who could ensure that a national security cover-up of an apparent counterintelligence nightmare was the head of counterintelligence.

In Newman’s thesis the connections between Oswald and Kostikov, a KGB agent suspected of being tied to KGB sabotage and assassinations, were carefully engineered. According to Newman, an Oswald impersonator acted on the orders of an unknown handler to tie Oswald’s name to Kostikov. “The handler’s purpose in having both Oswald’s and Kostikov’s names mentioned was to place evidence into the CIA records that, on 22 November, would link KGB assassinations to the murder of President Kennedy.” The problem with this is, as Newman admits only two sentences earlier, that the apparent Oswald impersonator “said he could not remember the name of the counsel with whom he had spoken” and that it was the Soviet embassy that suggested it as Kostikov. If the point had been to link their names, then it seems unlikely the supposed handlers would have the alleged Oswald impersonator fail to mention Kostikov’s name.

Let us accept for the moment, however, that Oswald did speak with Kostikov. While their mutual association with assassinations would make this a point of interest, their communicating wouldn’t be surprising regardless of any assassinations. Kostikov was, after all, one of the people Oswald would speak to about the visa that he was seeking. Following the assassination, the Federal Bureau of Investigation even informed the CIA that they “had reason to believe that Oswald’s visit” and alleged communication with Kostikov was related to passport or visa issues.

Beyond this, there are a number of problems with Newman’s narrative and conclusions. TUMBLEWEED, for instance, was not “the sensitive joint agency operation against the KGB assassin, Valery Kosikov.” Nor was it, as Newman suggested several pages earlier, “a joint agency investigation of Kostikov’s involvement in KGB ‘wet operations’ - assassinations.” TUMBLEWEED was, in fact, a double agent working for the FBI.

A double agent named Guenter Schulz. What seems to have confused Newman is that TUMBLEWEED had been in contact with Kostikov. This would, in fact, turn out to be the sole piece of evidence linking Kostikov to the Thirteenth Department of the KGB, responsible for assassinations and sabotage. The details of the case make it exceedingly unlikely that Angleton would have tried to use Kostikov’s alleged status as part of a scheme to manipulate multiple intelligence agencies.

To begin with, the evidence against Kostikov was weak. Even a year later, the FBI was unable to fully support the conclusion that they had originally presented. It wasn’t until May 31st, 1963 that the FBI suggested to the CIA, via Angleton, that they “consider the possibility that Valeriy V. Kostikov may be connected wit the Thirteenth Department.” In a declassified 1964 memo from the FBI Director to the CIA Director, J. Edgar Hoover explicitly links this possibility to the TUMBLEWEED case. He also notes that on June 25th, 1963 Angleton noted that the CIA had “no information … to indicate that Kostikov was a representative of the Thirteenth Department.” Surely if Angleton had been planning what Newman suspects, he would have found a way to at least suggest Kostikov could be connected to the Thirteenth Department.

Hoover’s memo goes as far as suggesting that CIA avoid “the affirmative expression of the belief in Kostikov’s employment by the Thirteenth Department.” According to Hoover, “information … suggests the possibility … however … no specific information is at hand to definitely support that possibility.” Hoover’s doubt about the connection likely paled next to Angleton’s. 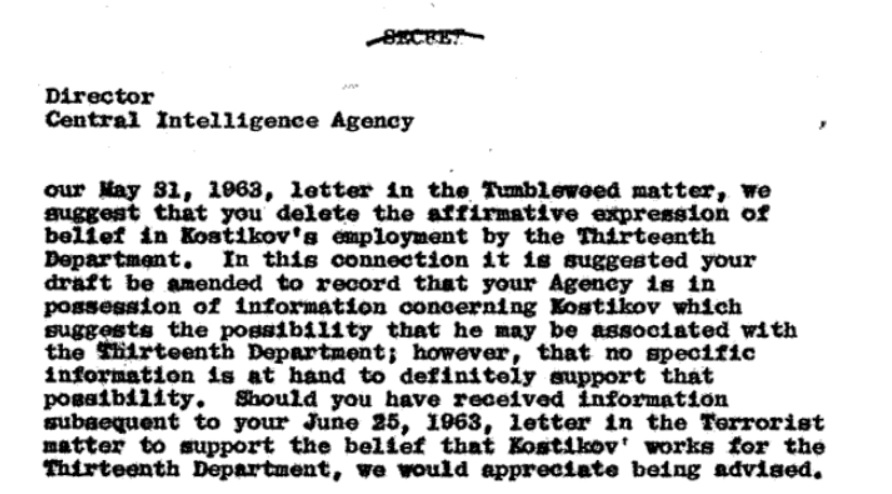 While a swift reading of an FBI memo from several days after the assassination might leave the impression that the Agency was convinced that Kostikov was part of the Thirteenth Department, a closer reading makes it clear they were only convinced of his affiliation with the KGB.

The CIA memo being referenced, written the same day, further clarifies this, as well as the tenuous case that Kostikov was affiliated with the Thirteenth Department. According to the memo written by Bagley, the “only reason to believe” Kostikov was connected with the Thirteenth Department was the FBI’s source TUMBLEWEED and a pair of photo identifications they had made. 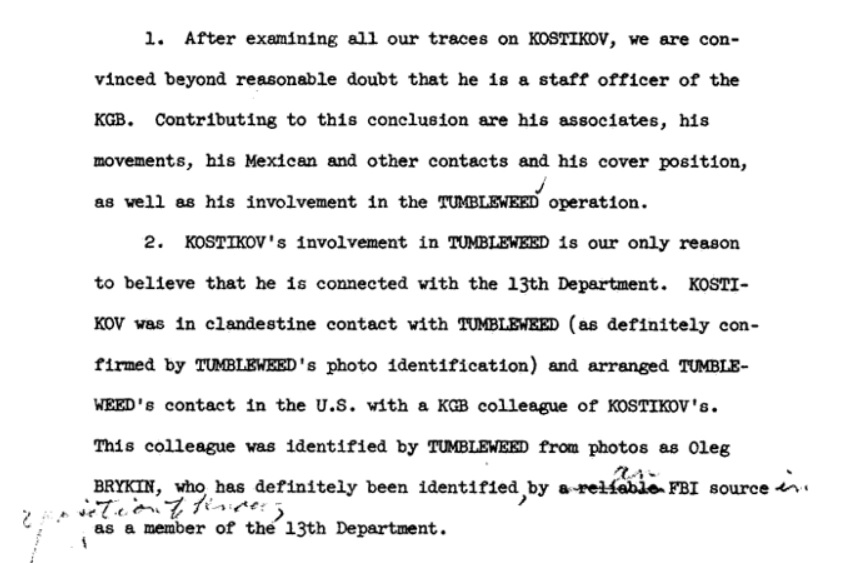 Another memo written by Bagley a few days earlier adds some additional information about the case, noting that the evidence against Kostikov was TUMBLEWEED’s assertion and photo identification of Kostikov as having provided TUMBLEWEED with “objectives for sabotage” along with Kostikov’s apparent New York counterpart, Oleg Brykin.

The case against Brykin would have, in the mind of Angleton, weakened the potential of using Kostikov as leverage to force a coverup. The FBI’s confirmation that Brykin, and therefore TUMBLEWEED and Kostikov, were part of the “Department 13” came from none other than FEDORA, Hoover’s prized spy later revealed to be KGB-controlled source of disinformation.

As the Washington Post noted, however, “Angleton had long regarded [FEDORA] as an agent provocateur.” 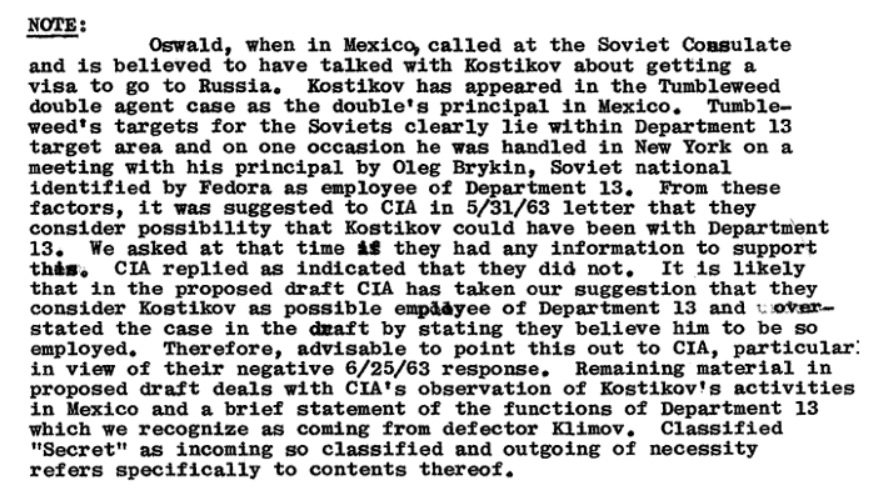 If Hoover had reservations about the Kostikov conclusions, which were based partly on his prized spy, it’s easy to imagine what reservations Angleton would have had while doubting that same source’s authenticity and being unable to come up with any information to corroborate the allegations against Kostikov. Years later, the FBI was still trying to convince Angleton to trust FEDORA - it wouldn’t be until after Angleton’s public departure from the Intelligence Community that the FBI would come to agree with Angleton’s assessment.

Nor was the Kostikov information as closely held as Newman believes. According to a declassified cable, it was reported that the Agency had put Kostikov under surveillance. At the same time, Kostikov was under surveillance of one of the Mexican security services, forcing the Agency to discontinue their surveillance of Kostikov. While the CIA Station hadn’t mentioned Kostikov to the Mexicans, the cable speculates that the surveillance was implemented due to Adolfo Lopez Mateos, Mexico’s president, receiving the take of the telephone taps that the Agency was conducting in a joint operation with the Mexican government. The joint operation, which would continue for at least several more decades, meant that both governments had access to the telephone taps operated by the CIA and the DFS.

In the end, not only does Angleton lack a clear motive to do what Newman suggests, the proposed narrative fits neither Angleton’s behavior nor his methodology. The opportunity to attempt what Newman suggests was also not so limited as he seems to believe, as it was shared not only by the FBI, the KGB and Kostikov himself, but the Mexican government and its notoriously corrupt DFS. Nor would Kostikov and the sinister implications of his contact with Oswald have been necessary to create a universal desire within the government to avoid being dragged into World War III with the Soviets. Oswald had defected to the Soviet Union and lived there before returning to the U.S., he had campaigned for Cuba and called himself a Marxist - and then he shot the President. While the Kostikov inquiry is not to be overlooked, it isn’t quite what Newman’s speculation makes it out to be - and it certainly wasn’t a machination of Angleton.