The Government Accountability Office (GAO) investigations into CIA-linked illegal activities are often stymied - a process well documented in files discussing the GAO’s attempt to investigate General Noriega’s ties to drug trafficking, and what the Intelligence Community knew, and when. Documents previously leaked to the Washington Post have now been declassified, confirming the Post’s reporting and providing new details about how CIA blocked all of GAO’s audits touching on any subject which required oversight.

On May 24, 1988 the Assistant Comptroller General at the GAO’s National Security and International Affairs Division sent a letter to CIA Direct Webster, informing him that the GAO had been requested to look into General Noriega’s drug-related activities and the U.S. government’s knowledge of it. The GAO, which is an investigative body reporting to Congress, often plays a role in supporting congressional oversight. Having recently assembled a team of professional investigators with law enforcement backgrounds, this was more within the scope of GAO’s work than at prior point in their history, and notably had been specifically requested by Congress. Coincidentally, CIA had recently been accused in Congressional testimony of providing information to Noriega on members of Congress.

The GAO’s study, however, would examine four other issues:

In addition to CIA, the work would include the Departments of State, Justice, and Defense along with other federal agencies. 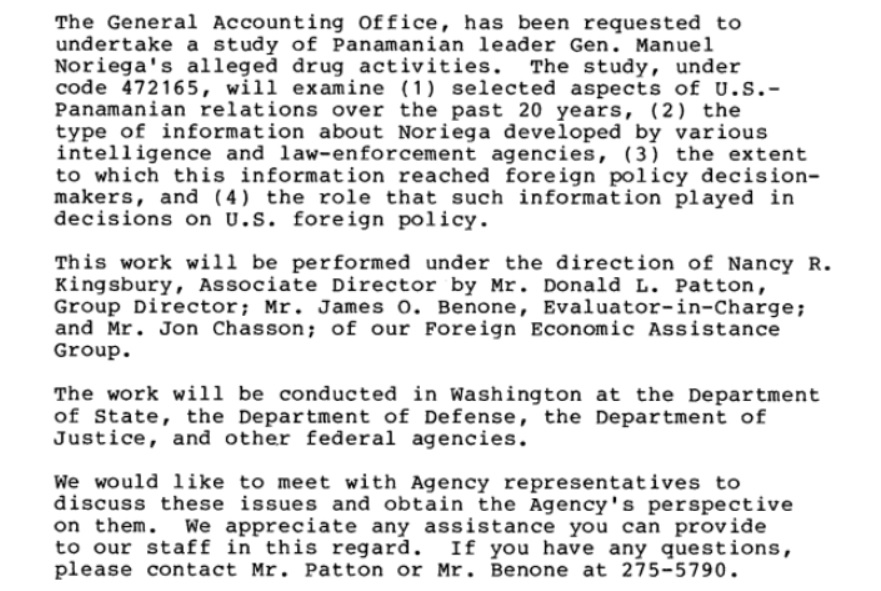 While CIA’s response does not appear to have been included in Agency’s database of declassified documents, it was summarized in another letter written by CIA. The second letter was declassified and included in the CREST database, confirming both the existence and the basic contents of the other letter and raising questions about why, since that information was declassified, the entirety of the letter appears to have been kept out of the CREST database. Whatever the reason for this exclusion, CIA’s Director of Congressional Affairs would later explain to the NSC’s Legal Advisor that CIA had declined the GAO’s request. 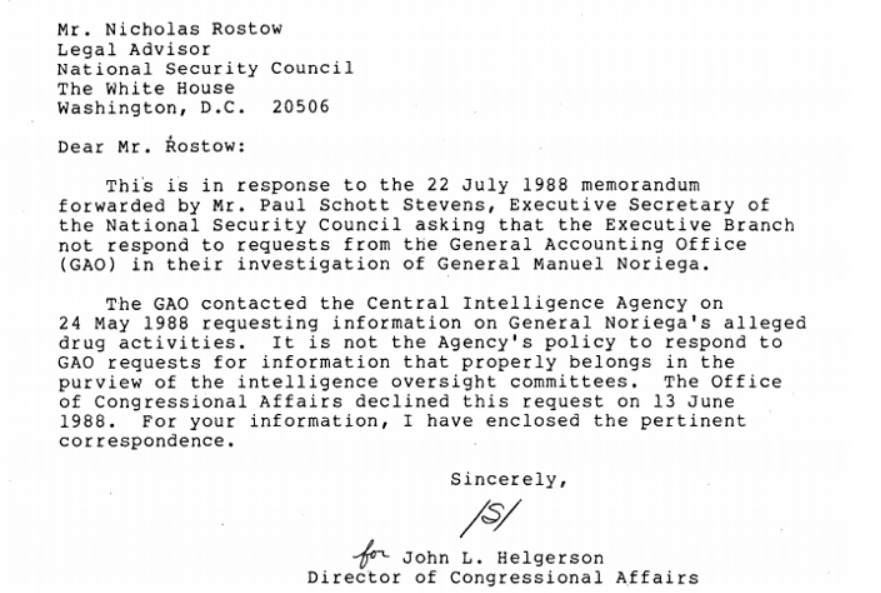 CIA’s basis for declining the GAO’s request is notable, in that it was apparently the Agency’s policy not to provide information to GAO if it fell under the jurisdiction of the intelligence oversight committees. Considering part of GAO’s mission is to support those intelligence committees, their response seems somewhat strange. It is, however, entirely consistent. During that same time period, the CIA had refused to cooperate with a GAO probe into Iran-Contra related matters, simply by noting that the matter was “subject to close scrutiny by the House and Senate Intelligence Committees.” Another memo noted that the Agency used the same logic, with the additional (and now too familiar) logic that since GAO would be investigating a crimes committed by CIA, no such evidence could exist. 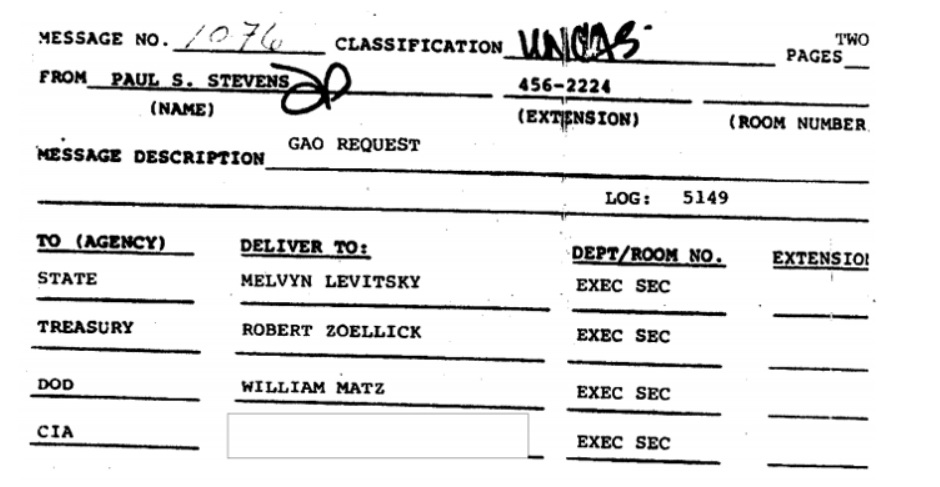 CIA sent the memo to the NSC’s Legal Advisor in response to a July 22, 1988 memo from Paul Schott Stevens, the Executive Secretary of the National Security Council and Special Assistant to the President for National Security Affairs, ordering the Executive Branch to not cooperate with the GAO’s probe. According to Stevens, “there should be no meetings with GAO and no documents or other information should be provided to GAO, in connection with request until the legal analysis is completed.” This legal analysis included whether they would cooperate with a probe that could touch on sources and methods and whether or not Executive Privilege could be asserted. 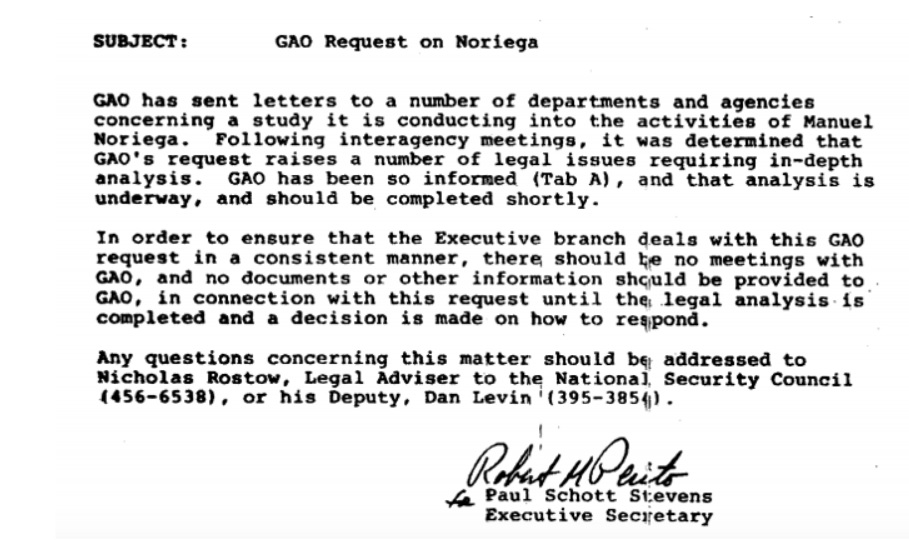 This instruction was sent throughout the Executive Branch, including the Departments of State, Treasury, Defense and Justice along with the CIA. According to the coversheet, Stevens followed up with a call to Agency, stressing the importance of disseminating the instructions widely.

Attached to Stevens’ letter was a response that had recently been sent by the White House and the NSC to the GAO. In this letter, the NSC expressed ‘disappointment’ that the GAO’s request hadn’t been narrowed down - a sentiment often similarly expressed by FOIA officers attempting to avoid performing a reasonably detailed search. According to the NSC, the GAO’s request raised “important statutory and constitutional issues.” Curiously, the NSC’s letter insisted that the deliberate process only dealt with the Executive Branch and therefore the President. The letter actually sent by the GAO specified information provided to decision makers, which would have included Congress to some degree. 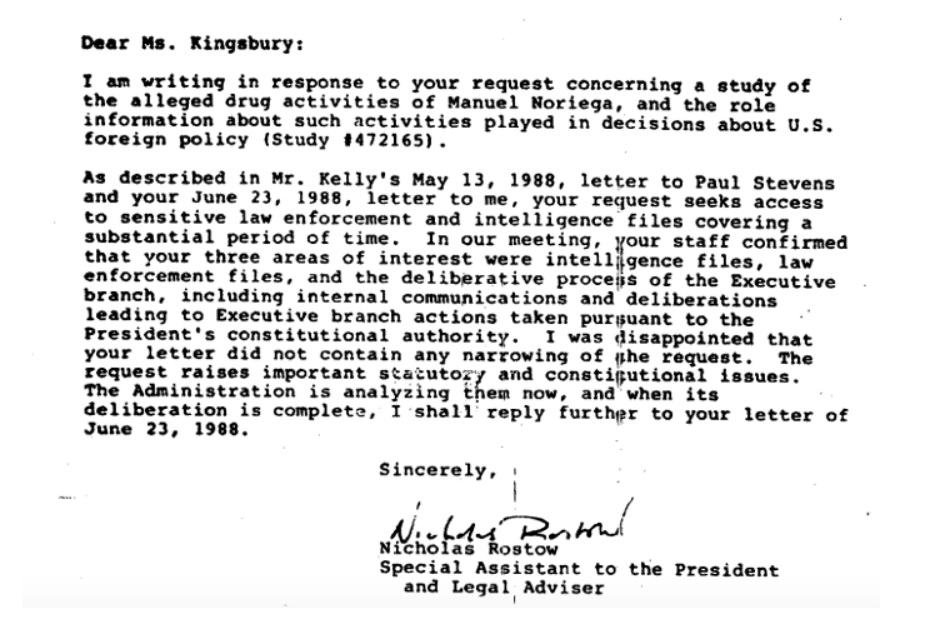 Ultimately, the Justice Department, who had been among the recipients of the NSC’s instructions not to cooperate with the probe, decided that the request went “beyond GAO’s statutory authority.” More alarmingly, the Justice Department also concluded that even if the request were within GAO’s legal authority, there would be legal objections to complying with it. As the CIA’s archives noted, the Washington Post wouldn’t be the only newspaper to correctly interpret the investigation as having been obstructed by the White House and and the NSC. The New York Times’ article even noted that the Justice Department had been instructed not to cooperate with the matter without the NSC’s approval.

One of the GAO memos is embedded below.