A version of this article appears on Motherboard

A video produced by Stanford as part of its government funded research into psychic phenomena alleged to show Uri Geller performing various psychic and extrasensory feats. While some in the Agency were “humbled” by the film, others were quick to declare it ordinary trickery from a con artist using techniques from stage magic and mentalism. Eventually, James Randi joined the discussion with his book about Uri Geller, only to find one of the scientists involved pushing back.

A copy of the video, spliced together from copies of varying completeness and quality, is embedded below, and an edited transcript can be found here.

Based on five weeks of experiments, a formerly SECRET memo describes the video being presented to CIA’s Office of Research and Development in January of 1973. By the next day, the Agency had already consulted with ARPA and a response was already being formulated. 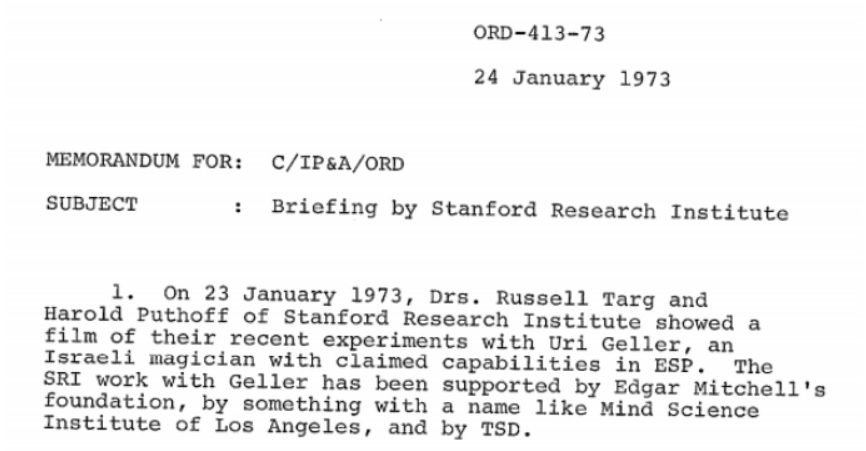 The memo accurately describes a number of the experiments performed, including reproducing line drawings of materials double sealed within envelopes. In other experimental tasks, Geller identified which side of a die would be facing inside of a concealed container or which container contained a piece of metal or water. According to the CIA memo, if the film was “accepted at face value”, then “there is strong indication that Geller possesses uncommon abilities.”

Neither the experimenters nor CIA were entirely willing to accept the film at face value, however. Drs. Targ and Puthoff were “well aware of the hazards of dealing with a professional magician whose avowed purpose at SRI is to obtain certification as an authentic psychic.” 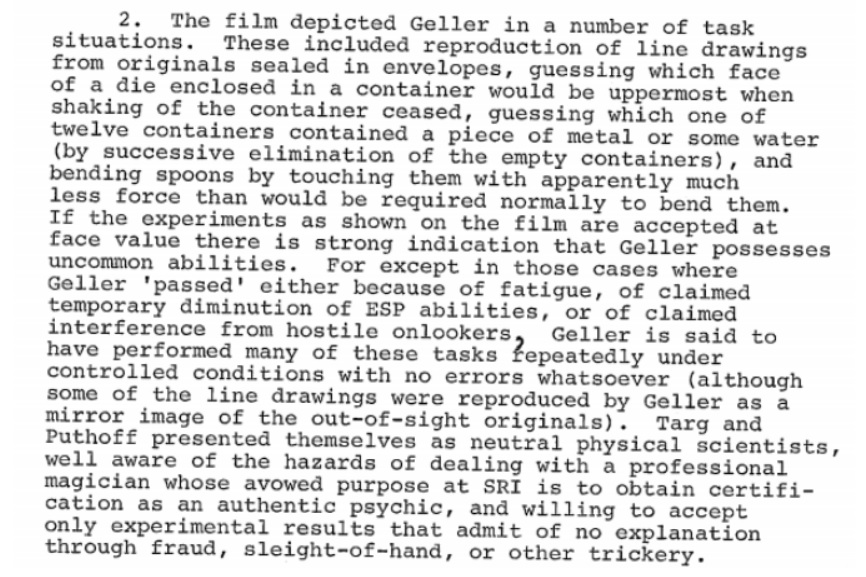 Only if the experiments could exclude all possibility of fraud, slight-of-hand or other trickery, they argued, should it be accepted as proof of anything. The film itself warned against concluding anything more than the fact that it would be wise to perform additional research.

ARPA, the Advanced Research Projects Agency and the predecessor to DARPA, was less than convinced. Drs. Kibler and Lawrence from ARPA had traveled to SRI to observe the experiments with Geller. Based on this, they had “serious doubt htat Geller’s accomplishment transcends the range of activities of a skillful magician.” They also expressed concern that “the experimental bias” of Drs. Targ and Puthoff “in favor of successful outcomes” undermined their objectivity. Drs. Kibler and Lawrence also cited Geller’s connection with Andrija Puharich as a reason to treat Geller with additional skepticism.

For their part, the author of the memo “observed … no unorthodox behavior by Puthoff or Targ that could serve to corroborate ARPA’s judgment.” Regardless, they were unable to exclude the possibility that the film had been doctored or manipulated, despite what they described as SRI’s “unimpeachable record.” 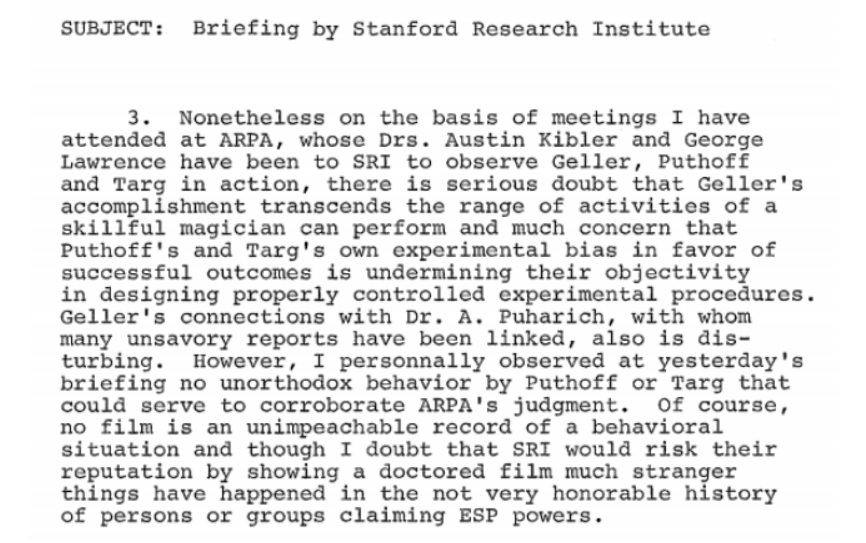 In a comment remarkably reminiscent of Aleister Crowley’s emphasis on the practical, the author of the memo went on to argue that it was essentially irrelevant whether Geller’s perceptions were normal or paranormal. What truly mattered was if they were reliable and could be replicated. What did it matter if Geller was simply able to apply advanced perceptual techniques or leaps of logic to arrive at a correct answer if it could be replicated and made operational?

“Someone who could reproduce blueprints locked in safes without looking at the blueprints, or someone who could distinguish from a distance decoys from real missiles, would be an undoubted asset.” With this in mind, the memo’s author recommended additional and more controlled tests, both of Geller’s abilities and of Geller himself to discover if his vision or hearing extended “beyond normal human limits.” 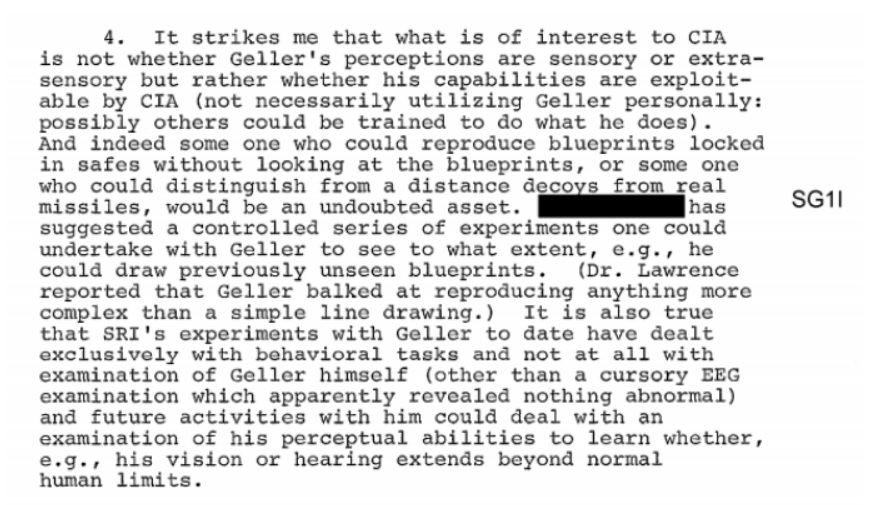 The memo’s author concluded by noting that so far, that the history of attempts to prove psychic phenomena had been “a history of repeated failures.” Nevertheless, they argued, the past was not necessarily a predictor of the future and it “should serve only to influence one’s prior subjective probability of the rewards to be gained by funding experiments like this.”

The author also noted that not everyone at the Agency was entirely skeptical. Reportedly, managers within the Directorate of Science and Technology (DS&T) believed “something of value” could come from the experiments. One person with DS&T went so far as to tell the author that they were “humbled” by the film. 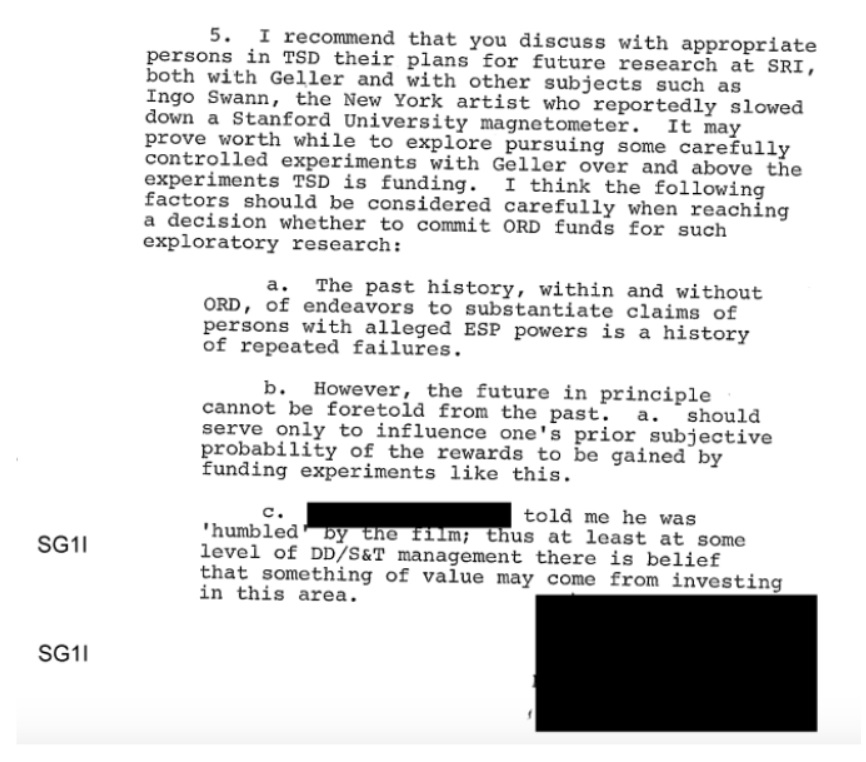 References to the film within CIA’s archive remain restricted, with one exception: James Randi, noted magician and debunker, had taken issue with Uri Geller, the SRI’s experiments and the accompanying film. He had previously written about Geller, but returned his focus to the man in the early 1980s with his book about The Magic of Uri Geller, later renamed The Truth About Uri Geller. The book and its criticism apparently frustrated Dr. Hal Puthoff, who responded with a “Fact Sheet” on the issue.

Many of James Randi’s issues centered on a suspicion that Drs. Puthoff and Targ had been too ready to accept the presence of psychic phenomena. 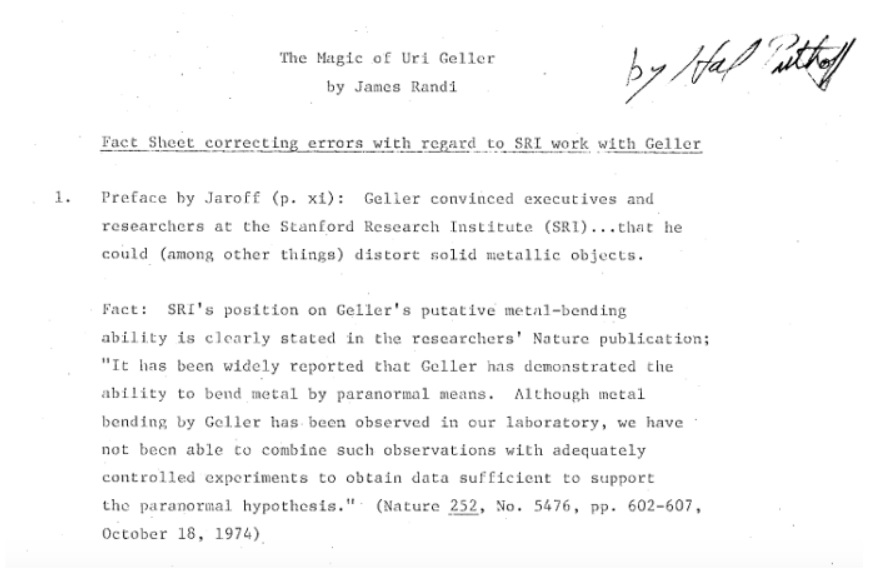 Other issues involved the presence of Geller’s friend and compatriot, who Randi felt may have been able to signal Geller or otherwise influence the experiments. 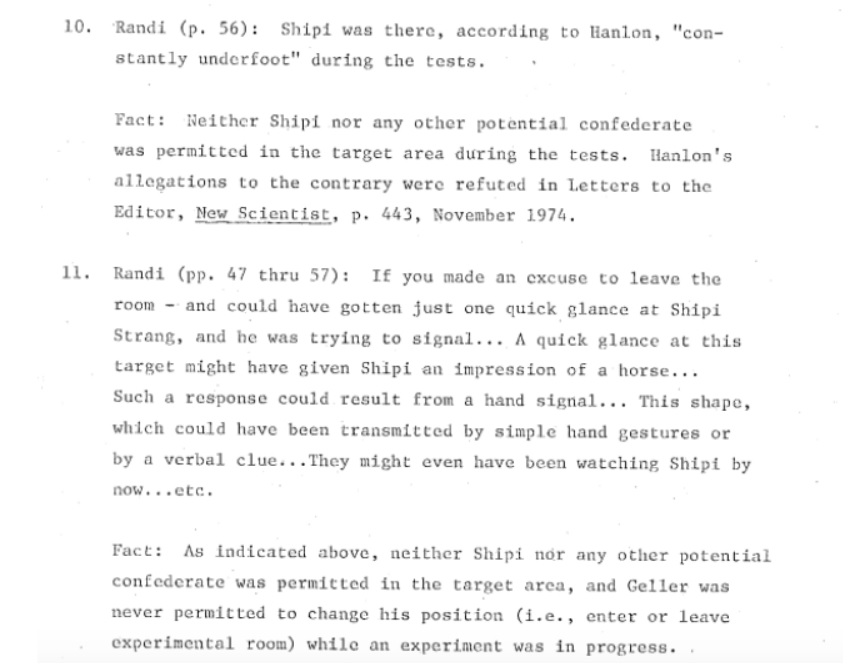 In one instance, Dr. Puthoff responds to the accusation that they had been taken in by magic tricks by pointing that, within the film, they readily acknowledged the possibility that certain feats could have been achieved by other means. Though they had no indication that this had been done, it was enough to cause Drs. Puthoff and Targ to disregard those experiments as inconclusive. 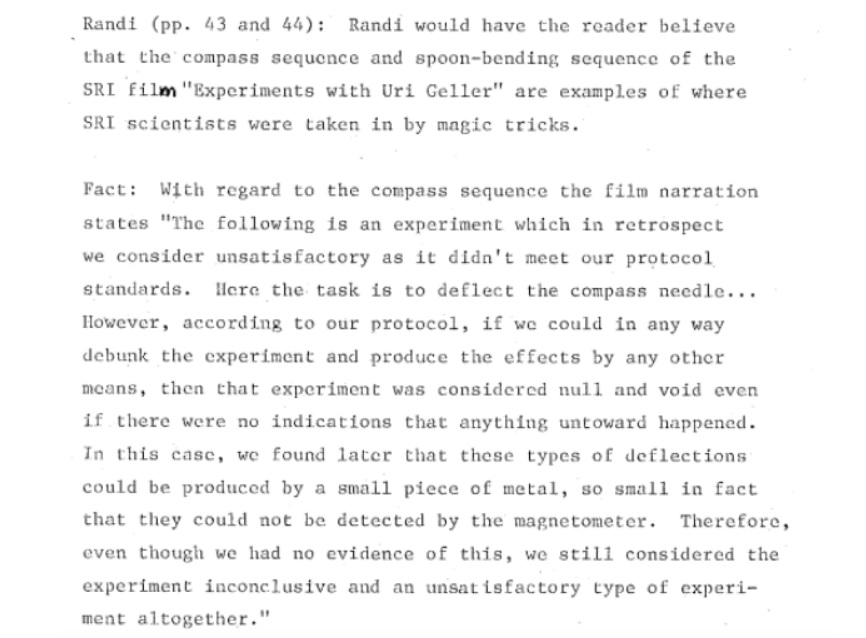 This same accusation was brought up with the subject of spoon and metal bending, which the author notes they found Geller unable to do in the laboratory. The film itself does show Geller bending spoons, but notes that he is unable to do so without touching the spoons. The film shows that not only did Geller touch the spoons, he rubbed them rapidly with his fingers. This is a common technique used by magicians as their body heat and the heat generated by friction warms and softens the metal, making it easier to bend. At the same time, the rubbing provides cover for a magician to manipulate the metal by pressing and bending it a few degrees at a time. 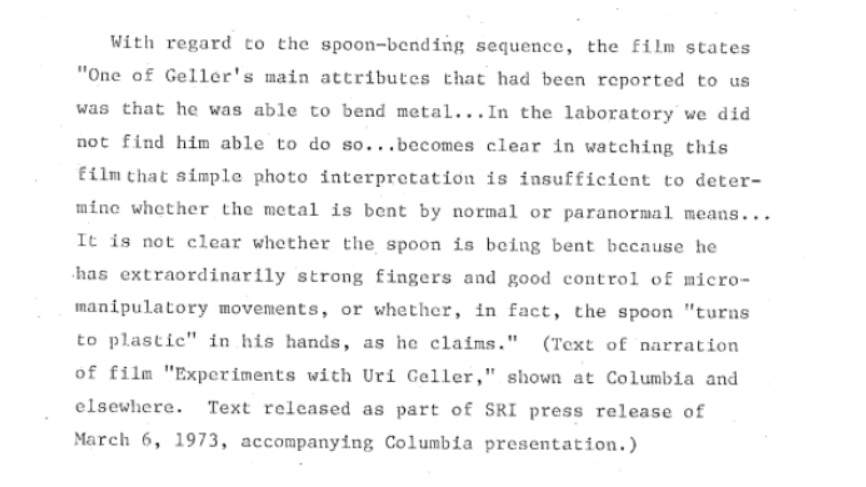 In one instance, Dr. Puthoff seems to contradict not only one of the experiment’s own sponsors, but the film itself. James Randi’s book quotes Captain Edgar Mitchell as saying that he “was there virtually all the time” and that the experimenters had caved to Geller’s “every whim.” In response, Dr. Puthoff declares that Captain Mitchell hadn’t been present at any of the experimentation reported in SRI’s Nature magazine article.

Not only does Puthoff’s statement seem to contradict Captain Mitchell’s, the Captain is credited in both the Nature article and the CIA memo as having provided support and financing. Moreover, he is shown to be present in the beginning of the film, actively taking part in one of the experiments.

Other elements of disagreement between Dr. Puthoff and James Randi appear to be one man’s word against another’s, with no readily available way to verify the procedures of specific experiments. While the information to confirm or disprove specific elements of the experimental procedures likely still exists, much it remains classified, confidential or otherwise not readily available/locatable to the public.

In the end, Dr. Puthoff not only stood by the results of SRI’s experiments with Uri Geller, he declared James Randi’s effort to debunk them a failure. According to Dr. Puthoff, the “negation” of Randi’s hypothesis “provided further evidence for the genuiness [sic] of the phenomena as observed and reported.” 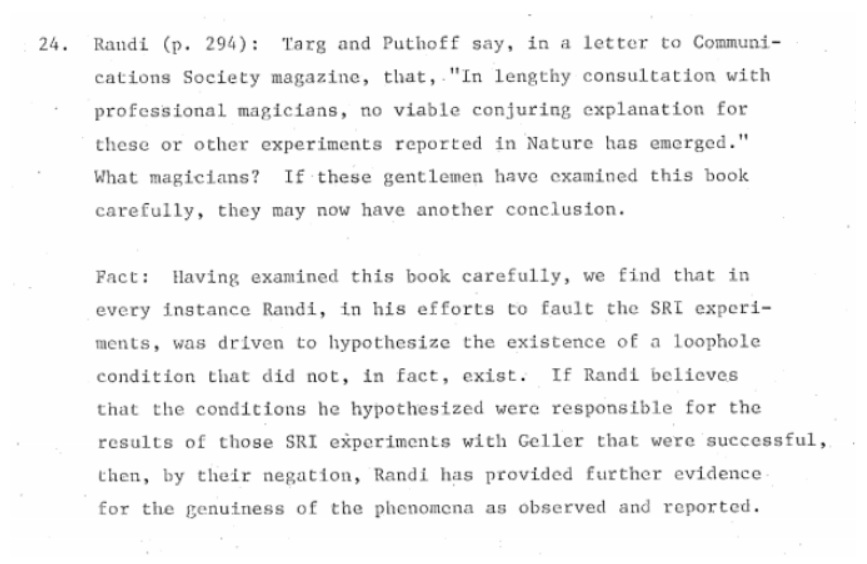 Watch the video and judge for yourself if it’s paranormal activity or normal trickery. Are you “humbled” by it, or skeptical of it?

Strategies and resources for using public records to understand COVID-19