Some researchers in the JFK assassination community are aware of the fact that one of the doctors that treated Jack Ruby was none other than Louis Jolyon West, a figure equally infamous for allegedly killing an elephant with LSD and for his work in MKULTRA - the Central Intelligence Agency’s infamous interrogation, hypnosis, and mind control program. An analysis of available documents from the CIA’s declassified archives and the recovered MKULTRA files shows that not only did West want to continue his work with the Agency during the period he was treating Ruby, the University he researched at thought that’s exactly what he was doing.

In August of 1977, CIA attorney Anthony A. Lapham sent out a form letter to eighty or more institutions which had been used in the MKULTRA program and whose identities were suddenly revealed in the cache of documents that had recently been discovered to have escaped the shredding and burning of all MKULTRA-related files ordered by former CIA Director Richard Helms. When Paul F. Sharp, the president of the University of Oklahoma, received his letter he wrote back to the Agency and requested “all information possible” about the project’s operations at the University. To date, neither Sharp’s letter nor the CIA’s response have been made public, although a copy of the form letter sent by Lapham has been located. 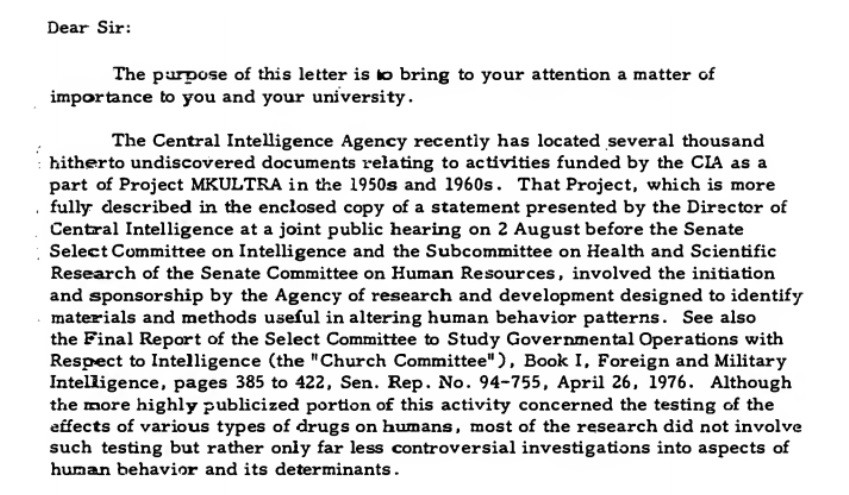 In a UPI article published by the New York Times, Sharp reveals the the University performed LSD tests on animals in the 1960s, which included the time period when West killed Tusko the elephant with LSD (and other drugs). According to an Associated Press article, the university president believed that this referred to the research that had been conducted by West. According to the same article, West said that he received funds from the Geschickter Fund sometime “before coming to Oklahoma.” Surviving MKULTRA documents and his resume show that he began MKULTRA work with money from the “Geschickter Foundation for Medical Research” in 1955 - the year he came to the University of Oklahoma.

West also said that his LSD research was limited to animals, although it’s known from the recovered documents that he worked with humans. While he publicly denied being aware that the project was CIA funded, documents show that he was explicitly aware of it and he was in direct contact with the CIA project heads. 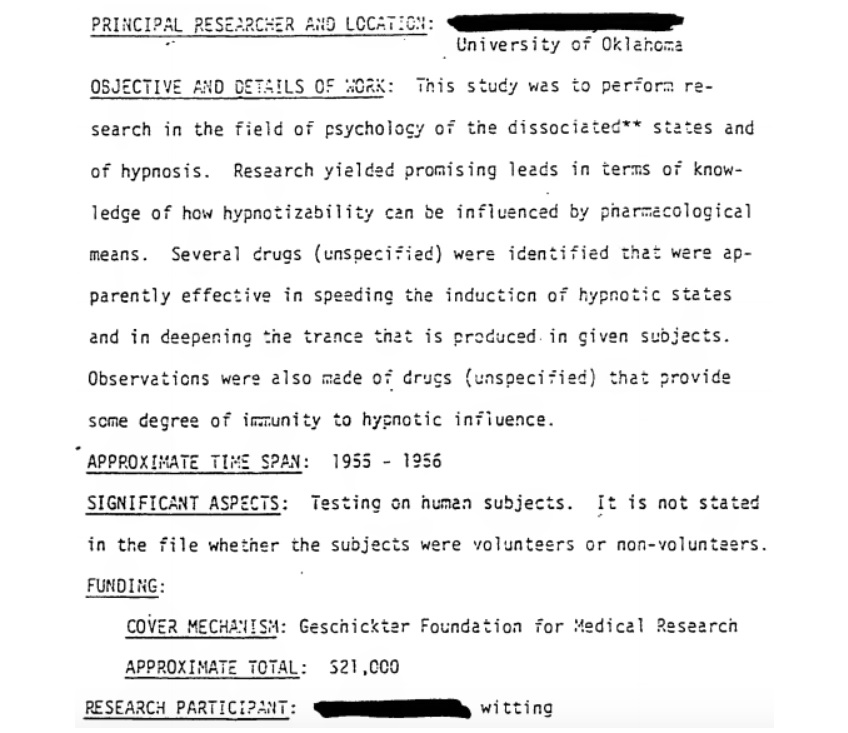 A recovered CIA document listing different MKULTRA subprojects shows that Subproject 43, associated with West and occurring at the University of Oklahoma, began in 1955 and ended in 1956 (when he also retired from the Air Force). The LSD work with animals that he and Sharp referred to took place years later and may or may not have involved human experimentation (although it’s known that his earlier work did). It might be easy to dismiss this, if not for the proposal for West to continue his MKULTRA work with CIA for another 11 years.

Other researchers who previously examined some of the documents embedded at the bottom of the article missed crucial facts. Colin Ross’ examination in The CIA Doctors describes the proposal, but fails to note the fact that it was written after the $20,000+ documented funds that West received from CIA. The letter accompanied with the proposal is dated February 1956, and clearly references upcoming work for the next fiscal year. 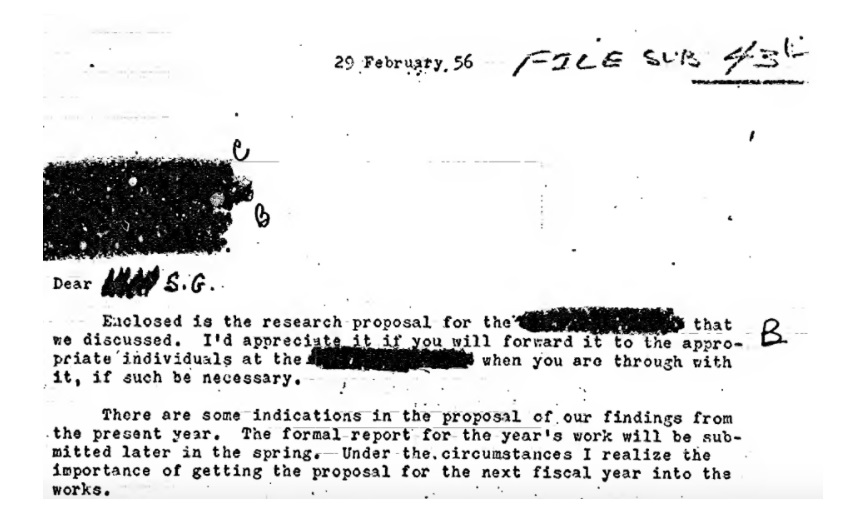 In the first subsection of the proposal itself, West says that he wants to continue the work for another 11 years. ”It is proposed that the experiments begun during 1955-56 involving hypnotizability, suggestibility, and the roles of certain drugs in altering these attributes, be continued and extended during 1956-67.” This would place West’s treatment of Ruby about three years before the proposed end of this particular MKULTRA subproject. In the proposal, West describes several elements of experiments that match the isolated experience of Ruby and West’s stated reason for going to see him. 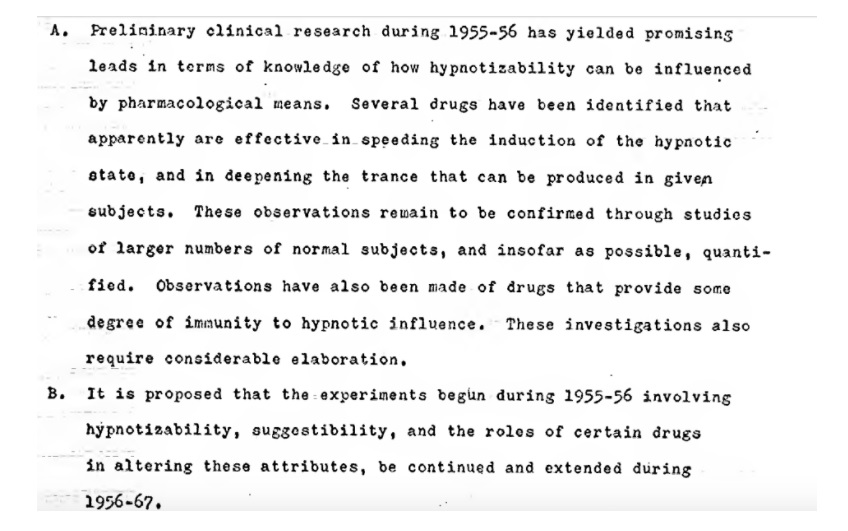 Ruby had an isolated cell constructed for him to live in as he awaited his fate and contemplated the possibility of being executed. The proposal stated that “There is reason to believe that environmental manipulations can affect the tendencies for dissociative phenomena to occur. Isolation, in particular, can markedly change the individual’s response to suggestion in the form of verbal communication. It is proposed that new experiments utilizing special environmental manipulations, including sensory isolation, be begun …”

West’s proposal specifies that these can produce marked personality changes, which Ruby appeared to have undergone in West’s examination of him. The report asserts that Ruby was psychotic and delusional at the time.

In his report, West said that “hypnosis and intravenous sodium pentothal were included among possible techniques” to be used on Ruby. In his proposal to CIA for continuing his MKULTRA work with them, he proposed that “the combined use of hypnotic techniques and autonomic drugs be exercised.” Sodium pentothal, as a barbiturate, is one such autonomic drug that - frequently used in various MKULTRA experiments and other interrogation or hypnosis related programs. In total, West requested an additional $35,995.00 for the next year’s work, not including the other ten years of research he had proposed. This included $5000.00 for “polygraphic, electroencephalographic, electromyographic, and special stimulatory apparatus.” 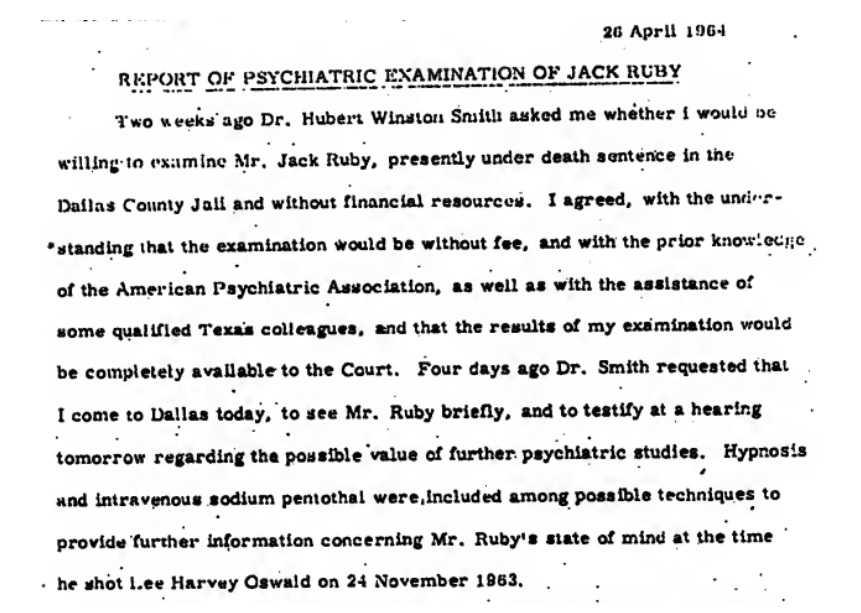 The Agency’s response to West’s proposal was apparently ordered destroyed along with all the other MKULTRA records. However, he continued to appear in CIA files as late as 1991. According to one document, West was indirectly involved in the STARGATE program which had a surprising amount of crossover with MKULTRA and its sister programs. While this particular project was undertaken by the Defence Intelligence Agency, the CIA’s counterpart in the Department of Defense, it was considered a CIA equity.

According to the document, “Serious government-funded research of both these domains began in 1973 when the Central Intelligence Agency (CIA) initiated a modest effort to determine if a genuine anomalous phenomenon could be verified and to assess the degree to which it could be applied to general intelligence problems.” Coincidentally, 1973 is the same year that the MKULTRA program was officially terminated.

While the research project’s stated goal was studying anomalous phenomena such as remote viewing and remote interference, the experiments themselves focused on remotely altering someone’s perceptions and nervous system, essentially making the research dual-purpose. If it had been successful, the research could have been used not only as part of a psychic remote viewing program but to design a way to remotely interfere with someone’s perceptions, personality, or consciousness. While many of the documents relating to this program wound up in declassified CIA files, being CIA equities and an extension of a CIA program, many more seem to remain classified.

Whatever evidence there was about CIA’s continuing relationship with West, and whether or not they accepted his proposal to continue his MKULTRA research, was destroyed decades ago. This blanket destruction removed any chance to properly exonerate the Agency, leaving just enough information to provide disturbing glimpses into the potential connections between Ruby and MKULTRA after Oswald was assassinated.

You can see a selection of CIA documents relating to West below, along with the report of his examination of Ruby and his description of the latter’s psychosis.