One of the many interesting documents in Central Intelligence Agency’s declassified archives was guidance for public statements regarding their MKULTRA mind-control projects. The guidance, produced in 1983 and modified the following year, was intended for CIA’s Deputy Directors, the Executive Director, the Director of Public Affairs and “all Agency employees on the speaking circuit.” Just over a page long, the text is riddled with lies, errors, and half-truths, starting with the very first sentence.

The dates provided are misleading at best. MKULTRA officially began in 1953, but one of it’s partner programs, MKDELTA, had begun in 1952. Its predecessor programs had begun as early as 1949, judging by CIA’s index of “MKULTRA and behavioral research” documents. It’s impossible to know much about what happened before that in MKULTRA’s predecessor projects BLUEBIRD and ARTICHOKE, as an Agency memo notes that “almost no information [is] available for the period prior to 1952.”

The same memo noted that the records described “only a small part” of the program. MKULTRA also didn’t end in 1964 so much as it changed its name to MKSEARCH. Other MKULTRA subprojects weren’t transferred to MKSEARCH, but rather simply incorporated into the Agency’s general research and funding programs. According to John Marks’ book on the subject, “Gottlieb acknowledged that security did not require transferring all the surviving MKULTRA subprojects over to MKSEARCH. He moved 18 subprojects back into regular Agency funding channels.”

When the guidance was updated the following year, it was modified in a way that appears to indirectly acknowledge the origins of the program in the ’40s - without actually conceding that programs began in the ’40s. 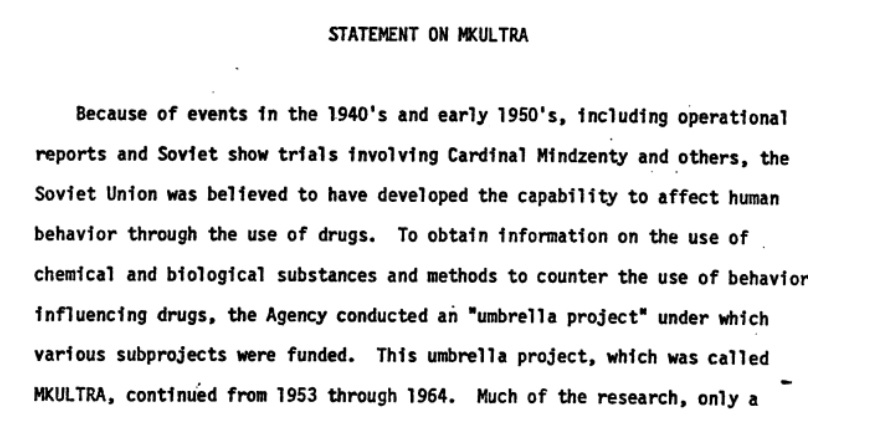 When the destruction of MKULTRA documents was ordered in 1973, it apparently didn’t include the MKSEARCH records. A CIA letter indicates that those documents still existed and were in circulation in 1977. This may be because the Inspector General report recommended that future testing be conducted in an operational setting (discussed below and in the attached report at the beneath the article).

The project also went well beyond the use of drugs. According to a report from CIA’s IG which had been produced 20 years earlier, the MKULTRA charter authorized investigation into behavior modification using methods including radiation, electroshock, psychology, psychiatry, sociology, and anthropology, handwriting analysis, nonlethal harassment substances such as tear gas and other paramilitary materials. 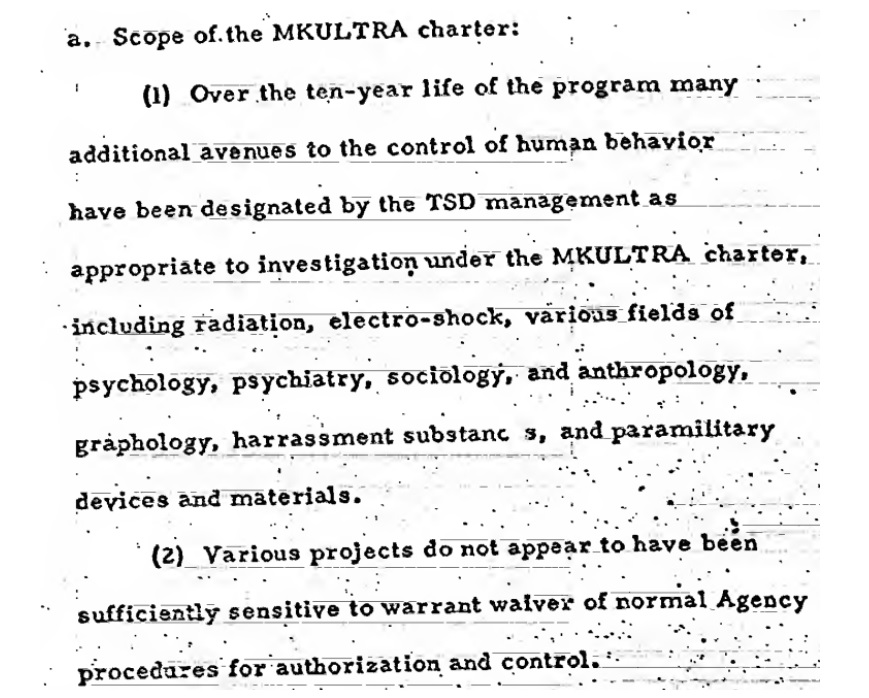 The guidance on statements regarding MKULTRA continues:

The above excerpt is mostly true, especially in the instances where the Agency used research foundations to provide “sterile grants” to institutions which would remain unaware of the Agency’s interest. However, “key individuals must qualify for top secret clearance and are made witting of Agency sponsorship. The system in effect ‘ buys a piece’ of the specialist in order to enlist his aid in pursuing the intelligence implications of his research.”

The next two statements in the Agency’s guidance about statements on MKULTRA are outright lies about some of the most important issues raised by the MKULTRA experiments and similar programs.

The first lie is that the Agency thought this was questionable. The IG report states that these “testing programs [were] conducted under accepted scientific procedures” [emphasis added]. Far from being applied to unwitting friends in a friendly environment, these procedures were carried out by “physicians, toxicologists, and other specialists in mental, narcotics, and general hospitals and in prisons who are provided the products and findings of the basic research projects and proceed with intensive testing on human subjects. Where health permits, test subjects are voluntary participants in the program.” In at least one instance, such testing resulted in the odious death of one of those involved.

When the guidance was updated the following year, it was changed to declare that there were “only three instances” where the “ethical/moral propriety” was questionable.

The Agency’s talking points go on to assert that:

As mentioned above, the program didn’t end - it was renamed and reorganized in response to the IG report. However, the IG report also contradicts the official statement that the program was discontinued because of concerns that were raised. The concerns focused on blowback of exposure, not on the efficacy or ethicality of the work itself. The 1963 IG report even specifies that ending the program wouldn’t truly end the program.

The IG report makes it clear that the concerns the Agency was worried about involved exposure, not the nature of the work itself. The Agency’s worry about exposure also focused not on the rank and file or those performing the experiments, but on “the senior command of CIA.” The introduction to the report even notes that many people within the Agency already found the work to be “distasteful and unethical.”

According to the press guidance, questions in the Agency about the propriety of the unwitting testing of subjects wasn’t raised until 1963 - a full ten years after they resulted in the death of Frank Olson (whose death some maintain was not an accident, but murder).

The talking points end on a note designed to mislead people into thinking that the program was proactively disclosed by the government in 1975 and 1976, instead of being exposed by the New York Times in 1974, and that new guidelines require that informed consent be provided.

The claim that the projects were discontinued in 1963 as a result of the IG report is undermined by the report’s suggestion that they begin using “deep cover agents overseas” to perform the testing for them.

Every line of the press guidance was carefully calculated to be just true enough to get away with saying it, while maintaining plausible deniability and misdirecting those who take the statements as anything other than gross distortions of the truth. Those statements, often deliberately vague, would then be repeated by the press in a game of telephone, with predictable results.

You can read the statement guidance on MKULTRA below, or read the IG report here.