A series of 1984 memos from the Central Intelligence Agency (CIA) Inspector General’s (IG) office reveals some alarming views on the press and how to deal with them. Among other things, the memo shows that 33 years before the Agency declared WikiLeaks a hostile non-state intelligence service, they were viewing the general press in the same terms.

Several weeks prior, CIA Director Casey had asked the IG to weigh in on officer Eloise Page’s paper on unauthorized disclosure. The IG passed the task onto someone on his staff, who produced a four page SECRET memo for IG James Taylor, who passed it onto Director Casey. The IG specifically endorsed the proposal for a program where the Agency would intervene with journalism schools, which is discussed further below. 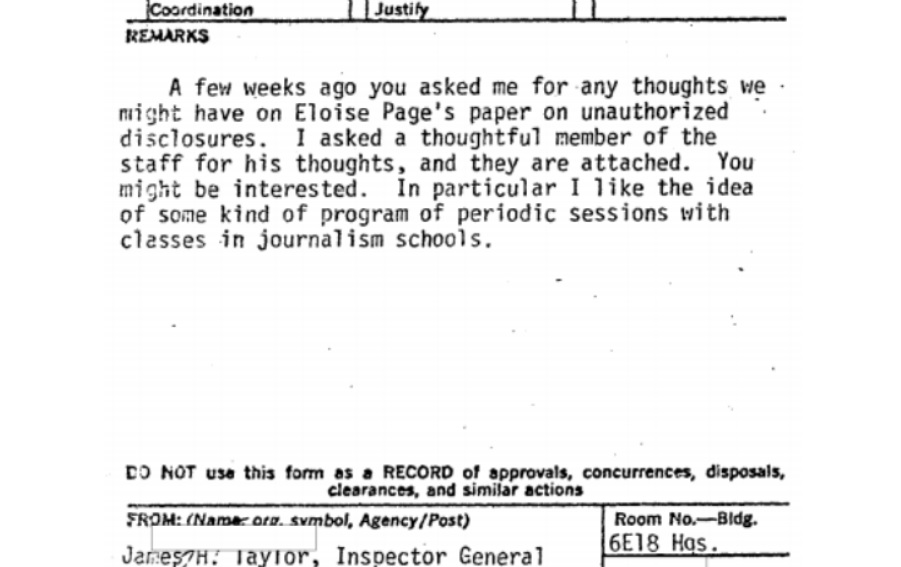 The SECRET memo began by endorsing the proposals that Page had laid out in her paper. Specifically praised among her proposed initiative was new legislation, a special FBI unit, and a special prosecutor. While it was obviously hoped that this would help enforce the law, the member of the IG staff also hoped that they would create a chilling effect. The sole criticism for Page’s paper was that it lacked a strategy for dealing with the media, who were the “principal villains” in all of this.

To the Inspector General’s office, the reason that the press were the “principal villains” was simple: “absolute power corrupts absolutely” and “the power of the media to publish in this country is nearly absolute.” As a result of the media’s “absolute power”, argued the Agency that had been involved in mind control attempts, illegal surveillance, tampering in foreign elections and dozens of assassinations, assassination attempts and coups, they had been corrupted absolutely. The member of the IG’s staff then suggested that they compare the media to the “opposition,” a reference to hostile intelligence services. This could be backed up by citing “precise parallels in methods and results, if not in motivations, between the media’s attempts to penetrate us and the opposition’s attempts to do the same.”

The IG’s office argued that the Agency’s response to the media had been largely passive and inadequate. Proposing that it was “time for an offense as well as a defense”, they offered a list of potential Do’s and Don’ts for the Agency.

First and foremost, they argued that the Agency shouldn’t “frontally attack” concepts such as the First Amendment and freedom of the press. Nor should any program to curb media excesses be announced. While they had praised Page’s suggestion of new legislation, they also argued that the Agency shouldn’t expect anything to materialize. Nor should they expect help from Congress on covert action - it was simply “too easy to argue there’s a public interest in debating actions that could lead to war.” Instead, the Agency should remember that journalists don’t operate in a vacuum and their support/publishing structure can be prevailed upon as a method of tempering a journalist’s activities - especially since the press had “their own reasons for wanting to improve [their] image.” 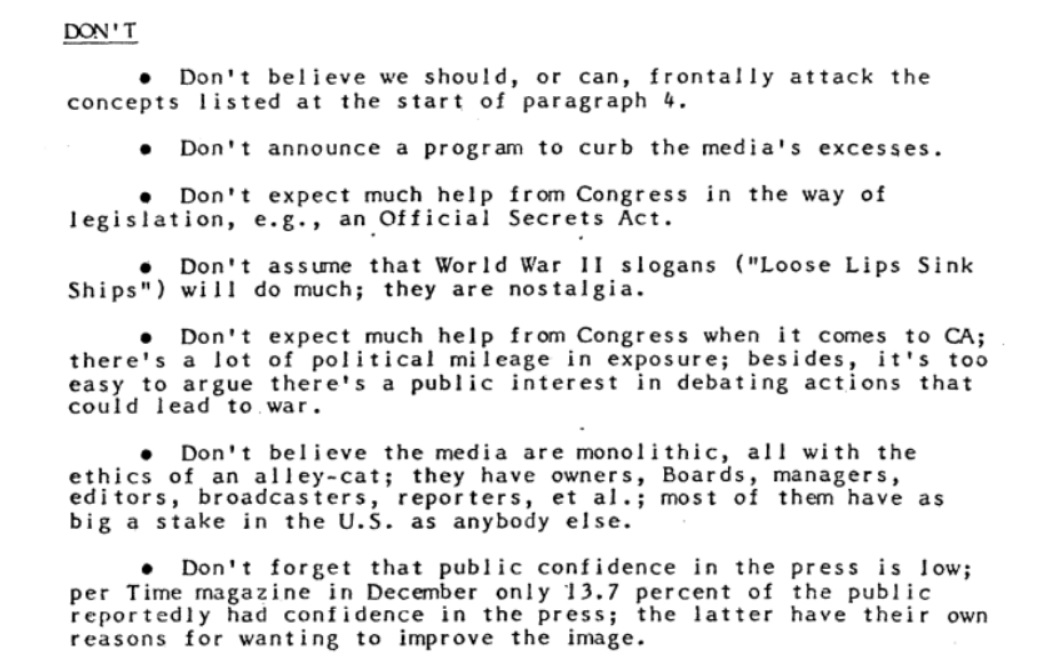 The list of Do’s was significantly longer, beginning with several self-explanatory suggestions and a call for releasing “a sanitized list of foolish media disclosure that have cost the country or individuals substantially.” The second half of that suggestion remains redacted, marked as exempt from disclosure lest it reveal some of the Agency’s sources or methods.

The list of Do’s also included using the Agency’s official contacts “in leadership posts” for academia and the media. There were “undoubtedly” similar unofficial contacts that could also be prevailed upon.

A later suggestion similarly pointed out that “the media have owners, Boards of Directors, managing editors et al” and that the Agency “had some success for a while in staving off” something, the details of which remain redacting allegedly to protect the Agency’s sources and methods.

The penultimate suggestion put forward by the IG’s office was that the Agency should figure out just what media ethics reviews and processes existed, and “try to get such people to address the issues that concern us.” That finding out and using proper channels needed to be suggested as a new strategy to pursue is mildly alarming.

The final suggestion, which was specifically praised by the IG when presenting the memo to the CIA Director, was using Agency contacts with college and university presidents at schools of journalism to change their curriculums. The hope was that this might challenge or put an end “to the practice of publishing indiscriminately whatever an investigative reporter can come up with.” The IG seemed taken with the idea that “given some curriculum changes, the next generation of reporters might show some elevation of ethics.”

The CIA Director passed the memo to Clair George, the Agency official responsible for liaising with Congress who would later be convicted of lying to Congress.

You read the exchange of memos below.