In a 1978 memo urging the curbing of the newly-empowered Freedom of Information Act, the CIA compiled a list of six FOIA topics considered to be the most potentially dangerous to the Agency’s reputation.

One reason CIA felt these requests were so dangerous was “because of the FOIA requirement to release bits and pieces of information.” There is no such requirement, only exemptions that CIA chooses to take advantage of - there is nothing stopping the agency from developing briefing books specifically for the public, although the Agency generally prefers anonymously releasing information through journalists.

According to the memo, the six FOIA request topics that do the most unnecessary damage to the Agency are:

MKULTRA and related programs were included on the list because “it is impossible to convince the public that these programs had their origins in the Fifties and were terminated in the early Seventies.” Part of this difficulty comes from that the fact that researchers like John Marks and CIA veterans like Victor Marchetti have concluded otherwise. Since that memo was written, over 1,700 MKULTRA documents were released to The Black Vault as image files. These were then converted to PDF and uploaded to the Internet Archive, where you can view them here.

Despite this, the Agency continues to try to thwart new FOIA requests on the subject. One recent request on documents pertaining to the Soviet’s research into mind control researched a GLOMAR response, despite the fact that material on the subject has already been released by CIA (negating any claim that they can neither confirm nor deny the existence or nonexistence of any records).

The Glomar Explorer and the “Glomar” response that became associated with it were the inspiration for the name of my website, Glomar Disclosure. Given what Glomar has come to mean in terms of FOIA requests, the Agency’s redaction of it in the 1978 memo remains one of my favorite redactions of all time.

“Because of the partial and unevaluated disclosures, the public has reached a conclusion that is contrary to the one arrived at if all the material is taken into account.” This incident is far too complex and controversial to even attempt to summarize here, so readers are encouraged to read about it in this declassified NSA document, on the ADL website, visiting the sources cited and recommended reading in the Wikipedia article, and this MuckRock project page by USS Liberty survivor Joe Meadors.

This refers to a joint operation between CIA and MI6 to tunnel under Berlin and tap Soviet communication lines. The operation had been exposed to the Soviets long before this memo was written, and since then a redacted version of the CIA’s internal history of the operation has been released.

Also known as “The Apollo Affair,” this was the diversion of nuclear material from the NUMEC plant in Apollo, PA to Israel where it was used to help develop nuclear weapons. Whether or not this occurred was controversially disputed for many years, but it has since been scientifically proven that the materials used in the Israeli facilities came from Apollo. You can read documents about the affair here, and for a comprehensive treatment of the subject see Roger Mattson’s Stealing the Atom Bomb: How Denial and Deception Armed Israel. A great deal more has yet to be revealed, including who was involved when and who was responsible for the decades long coverup. (Mattson identified a small handful of high ranking individuals from the Agency who are likely candidates). 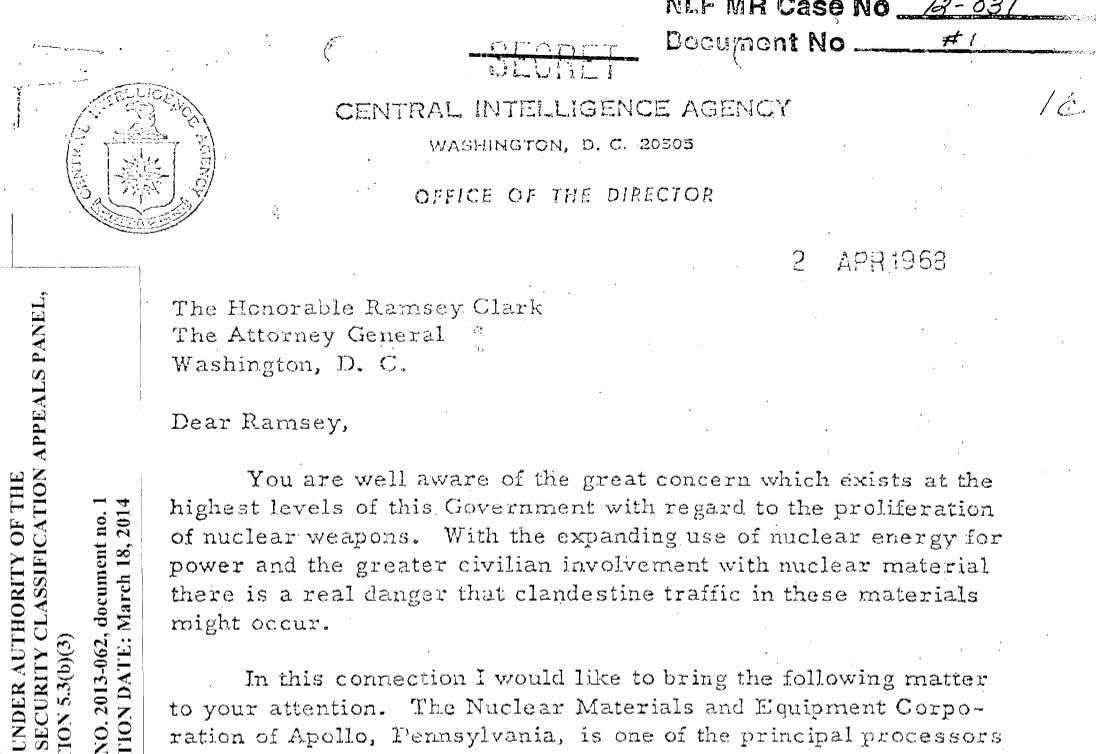 While a great deal of information was released decades after this memo was written, thanks to the JFK Records Act, there remains a large number of documents that the public is not allowed to see. For many, important questions surrounding the Kennedy assassination continue to linger. Whether or not Lee Harvey Oswald acted alone, the investigations into the assassination have touched on many CIA operations and produced evidence of cover-ups and misleading information that was presented to the American public. In addition, there remains evidence that has never been satisfactorily explained – like Oswald’s communications with the head of KGB assassination operations in the Western Hemisphere shortly before shooting Kennedy.

You can read the memo about these dangerous FOIA topic below.