An Intelligence Assessment of terrorist plots against the United States and US interests between 2001 and 2010 concluded that “a broadening US military presence overseas and outreach by Islamist ideologues” was behind an 11 percent increase in plotted attacks since 2006.

The Intelligence Assessment was carried out in 2011 by the Los Angeles Division of the FBI and the Joint Regional Intelligence Center (JRIC) and was based on an analysis of 57 terrorist plots from 2001 to 2010. It was released through a California Public Records request to the Los Angeles Police Department. 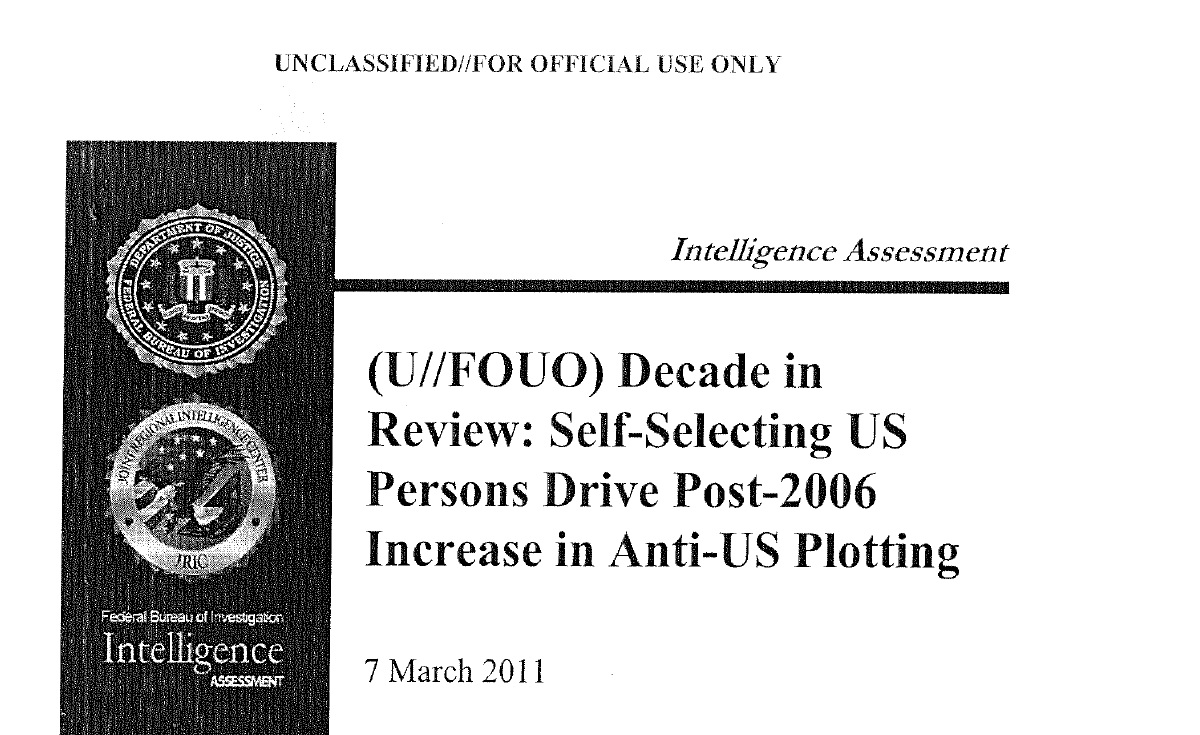 The increase in plots by Americans was not the result of “a formal, face-to-face recruitment plan by foreign violent extremists” but largely due to “self-selection, sometimes passively influenced by Internet provocateurs.” The FBI and JRIC were not able to quantify the degree to which Islamist propaganda and ideologues such as Anwar al-Awlaki were influential in inspiring terrorist attacks against the United States.

The Assessment found “few identifiable unifying qualities” among the 33 Americans who plotted attacks. The group was sociologically- and religiously-diverse and even included some who seemed to have “no identifiable religious affiliation” whatsoever. This finding is consistent with the scholarly consensus which suggests there is no single profile of terrorists. A recent Associated Press analysis of thousands of leaked Islamic State documents also revealed that “most of its recruits from its earliest days came with only the most basic knowledge of Islam.”

The FBI and JRIC were confident that “much of the activity stemmed from a perception that the United States is at war with Islam and jihad is the correct and obligatory response.” The U.S. invasion of Afghanistan and Iraq were factors in at least 25 percent of the cases but were cited as a “trigger” less frequently after 2006. Other “provocations” included Israel’s 2006 war in Lebanon and publication of cartoons of the Prophet Mohammad in a Danish newspaper.

The FBI-JRIC Intelligence Assessment is not the first time U.S. foreign policy and military actions have been identified as inspiring terrorist attacks.

A 2004 report by the Defense Science Board Task Force stated that “American actions and the flow of events [since 9/11] have elevated the authority of the Jihadi insurgents and tended to ratify their legitimacy among Muslims.” Specifically, it blamed the “one-sided support in favor of Israel and against Palestinian rights,” U.S. support for “what Muslims collectively see as tyrannies,” and the U.S. occupation of Afghanistan and Iraq for “elevat[ing] the stature of and support for radical Islamists.”

Similarly, a National Intelligence Estimate (NIE) in 2006 found that “the American invasion and occupation of Iraq … helped spawn a new generation of Islamic radicalism.”

Many terrorists in the United States have also been outspoken about their motivations for planning attacks. Faisal Shahzad, the failed Times Square bomber who was included in the FBI-JRIC Assessment, succinctly explained his own reasoning in court: “I want to plead guilty 100 times because unless the United States pulls out of Afghanistan and Iraq, until they stop drone strikes in Somalia, Pakistan and Yemen and stop attacking Muslim lands, we will attack the United States and be out to get them.”

The Assessment raises uncomfortable questions for the Obama administration’s Countering Violent Extremism (CVE) programs. CVE initiatives are ostensibly aimed at reducing the threat of terrorism in the United States. Theories of radicalization are supposed to provide law enforcement and intelligence agencies with a method of identifying those most susceptible to becoming terrorists and intervening before an attack can be planned and executed. Proponents of CVE initiatives, however, have struggled to contend with the fact that these theories are scientifically dubious and simply cannot predict who is likely to become a terrorist.

Despite these difficulties, CVE remains focused on identifying why one individual rather than another may carry out terrorist attacks, instead of considering factors - like U.S. foreign policy and military actions - which contribute to the threat of terrorism.

As Tariq Ramadan, Professor of Contemporary Islamic Studies at Oxford University, recently wrote, “it’s clear that western policies in the Middle East have led to high levels of frustration and may well explain why some individuals have adopted extremist views.” CVE programs, he continued, are “almost entirely mute” on this subject.

When CVE initiatives do address U.S. foreign policy, it is not in order to question whether specific policies may contribute to extremism but rather to steer targets toward “effective approaches to activism and political/social impact,” as the Greater Boston’s CVE Framework states. It is unclear what exactly this means or how it is to be accomplished. One would think the history of law enforcement and intelligence agencies carrying out surveillance of constitutionally-protected, nonviolent activism in Boston would not make these activities more attractive.

In fact, CVE seems deliberately designed to circumvent any discussions about changing U.S. policies. By focusing overwhelmingly on Muslim communities, it conveniently sidesteps questions about U.S. policies which continually produce terrorists. The onus is instead placed on Muslims to collaborate with law enforcement and intelligence agencies and police themselves while the U.S. government proceeds with business as usual.