On April 22nd, 2010 the Homeland Security Advisory Council’s (HSAC) Countering Violent Extremism (CVE) Working Group met to discuss how CVE could be incorporated into community-oriented approaches to law enforcement. The Working Group was formed in February 2010 at the recommendation of Department of Homeland Security (DHS) Secretary Janet Napolitano. Over half a dozen police departments were represented at the meeting to speak about how their departments were engaging with local communities and what support DHS could provide them.

The New York Police Department (NYPD) representative spoke about how its Community Outreach Division was building relationships with local communities. According to the meeting notes, the Division had developed a soccer league for Muslim groups and cricket for South Asian groups. Its ride along program allowed community members to “be with the police officers and view their actions.” It conducted safety seminars in mosques and provided “stuff” such as “soccer balls, shirts, etc.” to community members. The Division, continue the notes, “is separate from the intel or other units.” 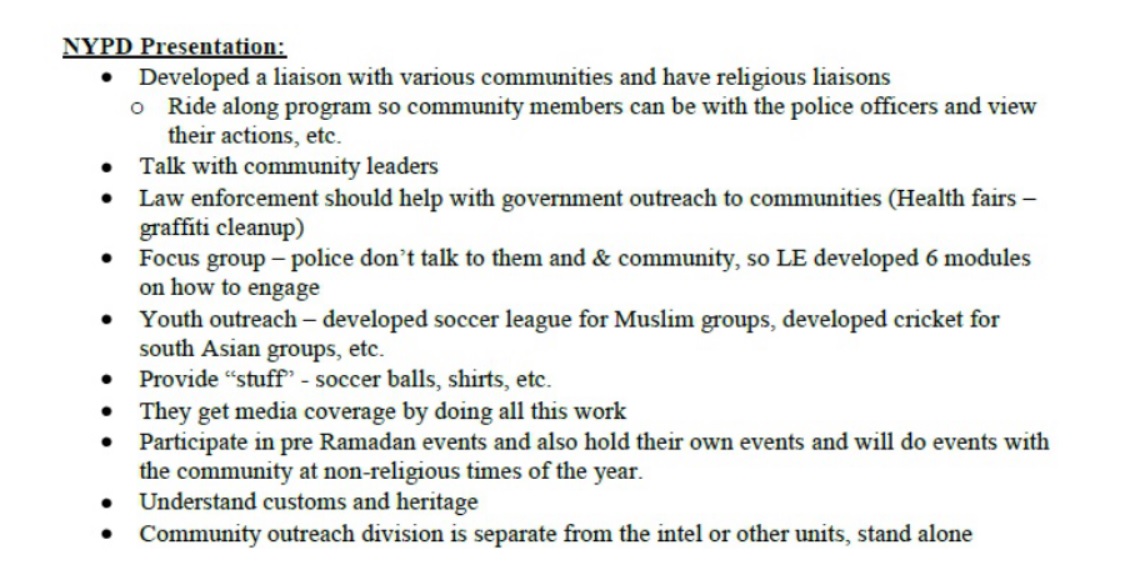 One of these other units was the NYPD’s infamous Demographics Unit. At the time NYPD’s representative was discussing its soccer league for Muslim groups, the Demographics Unit was engaged in what the American Civil Liberties Union (ACLU) would later call “religious profiling and suspicionless surveillance” of Muslims in New York and beyond.

This detail seems to have escaped the NYPD representative at the meeting, which was overwhelmingly concerned with cultivating trust between law enforcement agencies and American Muslim communities. At one point the meeting even veered into the philosophical, with one participant wondering what exactly one meant by “trust.”

The meeting notes, along with related e-mails and a Q&A about the recommendations, were released through a Texas Public Information Act request with the Austin Police Department, which was a participant in the Working Group.

The documents reveal a program intended to build grassroots support for CVE within American Muslim communities by fostering relationships between those communities and local police departments. While the approach is marketed as a collaborative way to solve problems, it rests on establishing a relationship which would facilitate community members providing information to local law enforcement agencies.

This is concerning not only as an expansion of law enforcement functions to communities but also as it provides no safeguards to protect members of these same communities from aggressive police action. There is also no established basis on which information should be provided to the police. The meeting notes and the final recommendations call to “delink” radicalization and community policing but still insist on identifying “behaviors and indicators associated with ideologically-motivated crime.”

The relationships between American Muslim communities and law enforcement agencies promoted by the community policing model seem to be purely transactional - as the Los Angeles Police Department’s (LAPD) representative puts it, “LAPD’s outreach efforts build ‘credits in the bank’ with the Muslim American community for the force to use later when it needs it.” Some at the meeting caution that the relationship must not be “securitized” and law enforcement officers must show they can “deal with a variety of crimes and communities and not just violent extremism and communities where violent extremism occurs.”

This, however, is belied by the meeting’s almost exclusive focus on Muslims, complete with a polling presentation establishing their bonafides as true Americans instead of foreign transplants (even if the men are “more likely to be angry” than the average American male).

Given that CVE is concerned with issues of national security, it is not clear how it can be pursued in a non-securitized way or why law enforcement agencies should be involved at all if relationships with American Muslims must not be “securitized.” The participants at the meeting seemed oblivious to the irony of calling for pursuing non-securitized relationships with communities alongside calls for putting more police officers in these same communities.

Even more troubling is the lack of any acknowledgment of the already heavily securitized approach of law enforcement agencies toward American Muslim communities, as the NYPD’s Demographics Unit illustrates. While the NYPD has reportedly shut down its Demographics Unit - acknowledging it produced no leads - the FBI still maintains an aggressive approach toward American Muslim communities. The meeting notes include statements by representatives from the Dearborn and Las Vegas Metropolitan Police Departments arguing the FBI is needed for community policing to be “successful” and must be “part of any solution.”

The increased presence of police officers is to also to be complemented by community members themselves who are to become the eyes and ears of law enforcement agencies. Information gathering and surveillance is to be carried out by community members who are to keep the police informed of their findings. “Specific points of contact” should be established in communities, read the meeting notes, with “imams or organization leaders” who can let law enforcement leaders know “the pulse of what is happening on the ground.”

While the final recommendations call for the federal government to “ensure adequate safeguards for basic rights in cases of individuals about whom information is provided by communities,” no information is made public about what those safeguards are or how adequate they may be.

There is also a disconnect regarding exactly what should be considered suspicious. The final recommendations note the “current level of understanding regarding the sociology of ‘radicalization’ and ‘extremism’ is still immature” and “local law enforcement crime reduction efforts should be delinked from the current academic and policy discussions on ‘radicalization.’”

Far from being immature, the scholarship demonstrates that there is no single profile of violent extremists nor can one predict future terrorists from past behaviors.

Nonetheless, the Working Group recommends that DHS explore what “behaviors and indicators” are “associated with ideologically-motivated crime.”

The meeting notes highlight this confusion even more forcefully: law enforcement agencies and American Muslim communities should “define the problem and what the characteristics are of those who radicalize” but the focus should be “on the violence and not the ideology.”

The confusion is understandable given that intervention has to take place before any violence has occurred and law enforcement agencies need some way to narrow down who will likely carry out violence. This necessarily requires a focus on behavioral indicators of radicalization and characteristics of “those who radicalize” even as one concedes the scholarship does not support this view.

Community-oriented law enforcement approaches to CVE are intended to build legitimacy for the program within communities that are being policed. It expands both the presence and the power of police without even an acknowledgment of the far more aggressive approaches of other law enforcement agencies or other units within the same agencies.

While it calls for appointing handpicked community members as the eyes and ears of law enforcement, there are no assurances as to how the information gained is to be used, what other agencies or governments it is to be shared with, what safeguards are to be put in place for protecting those who are suspected of being radicalized, etc.

Remarkably, this is somehow seen to be consistent with the acknowledgment that academic and policy discussions on “radicalization” should be “delinked” from community policing.

Far from being a panacea to violent extremism, community-oriented approaches to CVE merely end up expanding both the functions of law enforcement and the scope of surveillance American Muslims are subjected to. That this is done based on the shoddy pretense that there are specific indicators of radicalization and on the assumption that law enforcement agencies must be involved in instances where no crimes have been committed makes it all the more troubling.

Getting a NYPD cricket league in return is hardly sufficient recompense.

Read the release embedded below, or on the request page.

Waqas Mirza sent this request to the Austin Police Department of Austin, TX

Waqas Mirza sent this request to the Dearborn Police Department of Dearborn, MI