Civil rights groups have frequently lodged complaints against government counter-extremism strategies for relying on unfounded theories of radicalization which assumes there are consistent behavioral indicators of who will become a violent extremist. These strategies are also held responsible for stigmatizing American-Muslim communities through an exclusive focus on Islamist extremism.

To its credit, the Multi-Disciplinary Threat Assessment and Intervention Team Working Group (“Working Group”) tasked with drafting the Greater Boston Countering Violent Extremism (CVE) framework goes to great lengths to acknowledge these criticisms, as documents released through a Massachusetts Public Records Law request show. But, as it turns out, those acknowledgments ultimately proves ineffectual in making an impact on the final strategy. 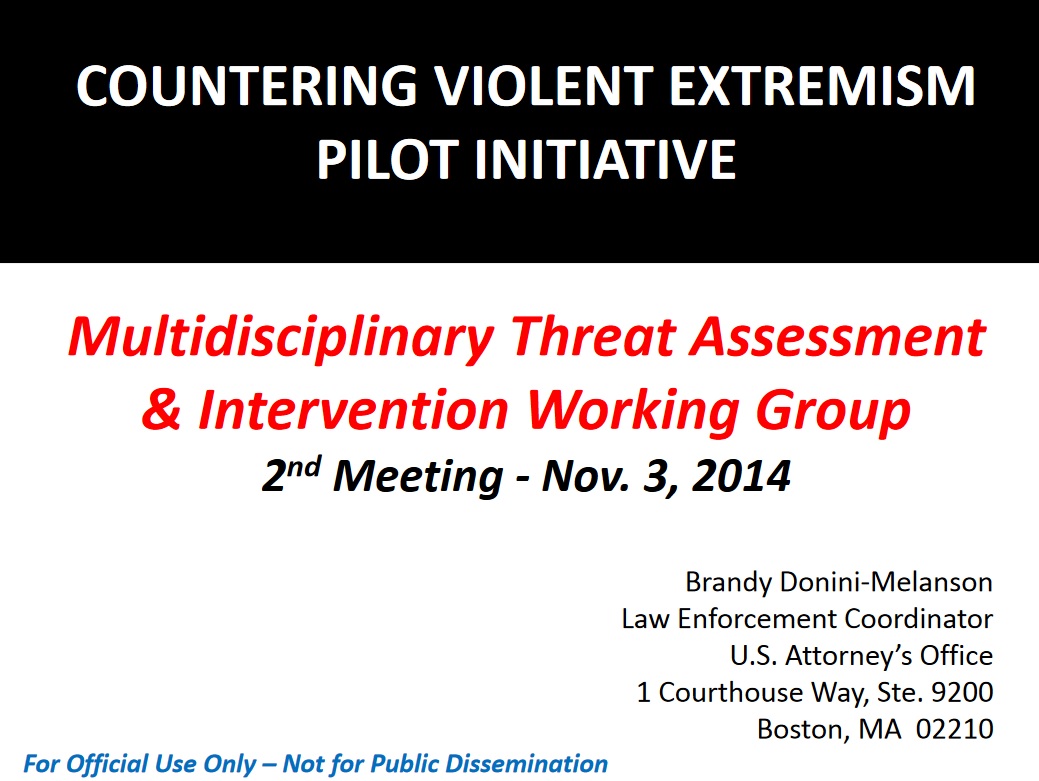 The result, however, is a framework which admits its shortcomings even as it remains unable to rectify them. The final framework maintains a focus on Islamist extremism - even as it attempts to repackage itself to avoid doing so - and it continues to rely on behavioral indicators - even as it concedes that they lack any predictive utility.

John Horgan, then Director of the Center for Terrorism and Security Studies at UMass Lowell and currently a professor of Global Studies and Psychology at Georgia State University, served as an advisor to the Working Group. He explains that in his presentation to the group, “the very first thing I did was to outline and explain why there’s no consistent profile, and why (and how) any behavioral indicators seem to be identified only in hindsight … [T]here’s [no] clear checklist of symptoms that reliably predict[s] who is a terrorist. That doesn’t exist, and I made that very clear from the very first meeting I had with the group.”

An e-mail which lists “takeaways” from the first Working Group meeting acknowledges that behavioral indicators have been “disputed as unfounded” and it “may be challenging to craft specific intervention protocols” without them.

There is a recognition by the Working Group that behavioral indicators may not be “true predictors of violence.” Nonetheless, perhaps as a sign of just how challenging it may be to “craft specific intervention protocols” without them, a PowerPoint presentation made during the second Working Group meeting both acknowledges this insight and continues to ask which behaviors it should identify and consider for intervention. 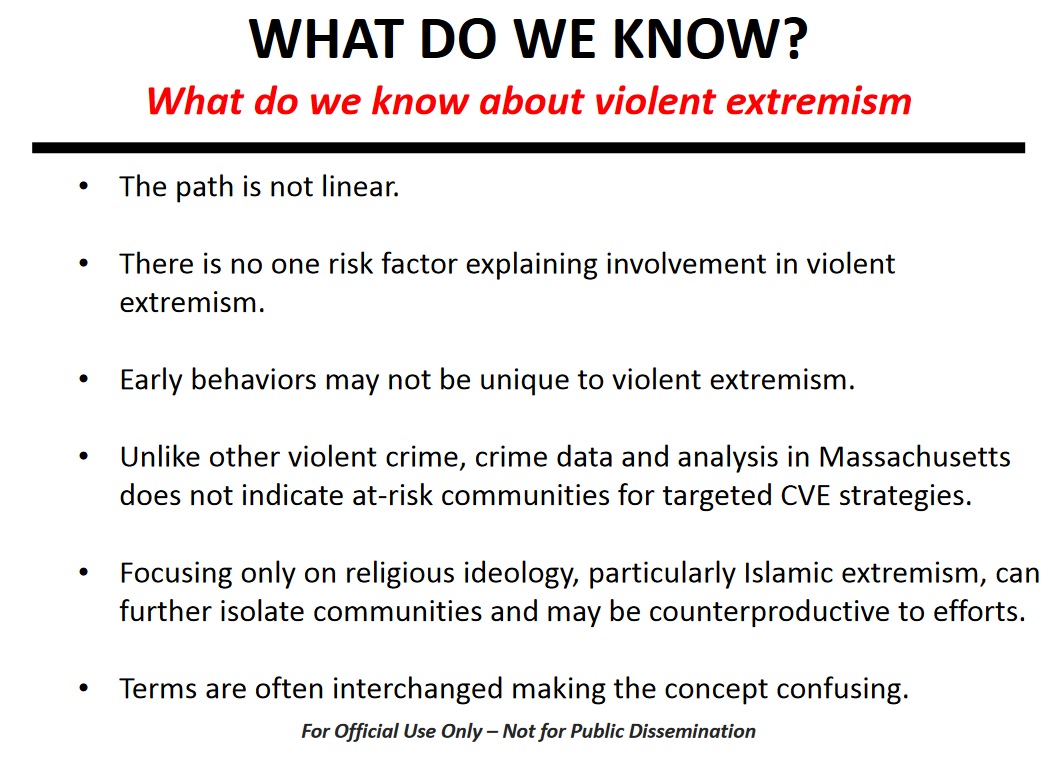 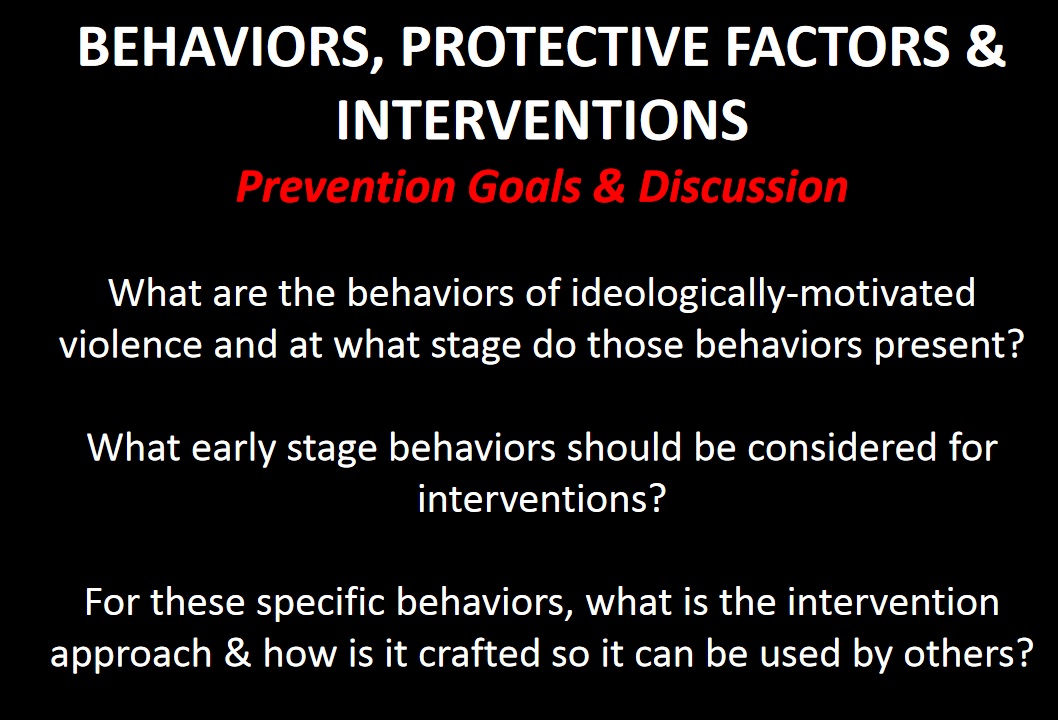 Conceding that behavioral indicators are of no predictive utility does not prevent the Working Group from maintaining the concept, from the first to the final drafts. The behaviors themselves remain unidentified in all documents.

Arun Kundnani, author of The Muslims are Coming! Islamophobia, extremism, and the domestic War on Terror and a lecturer at New York University, says this contradiction arises from policy-makers’ demand for counter-extremism policies which only make sense on the assumption that behavioral indicators that can “reliably predict who will be a terrorist” exist and “a general recognition among serious scholars that there are no [such] indicators.”

Kundnani believes the “second of these seems to have happened with the Boston framework.”

Another challenge facing the Working Group was to avoid the impression that the program specifically targets American Muslims, as critics have long alleged. The Working Group attempts to avoid this by incorporating CVE within broader, preexisting strategies to prevent targeted violence (including gang, workplace, and school violence). 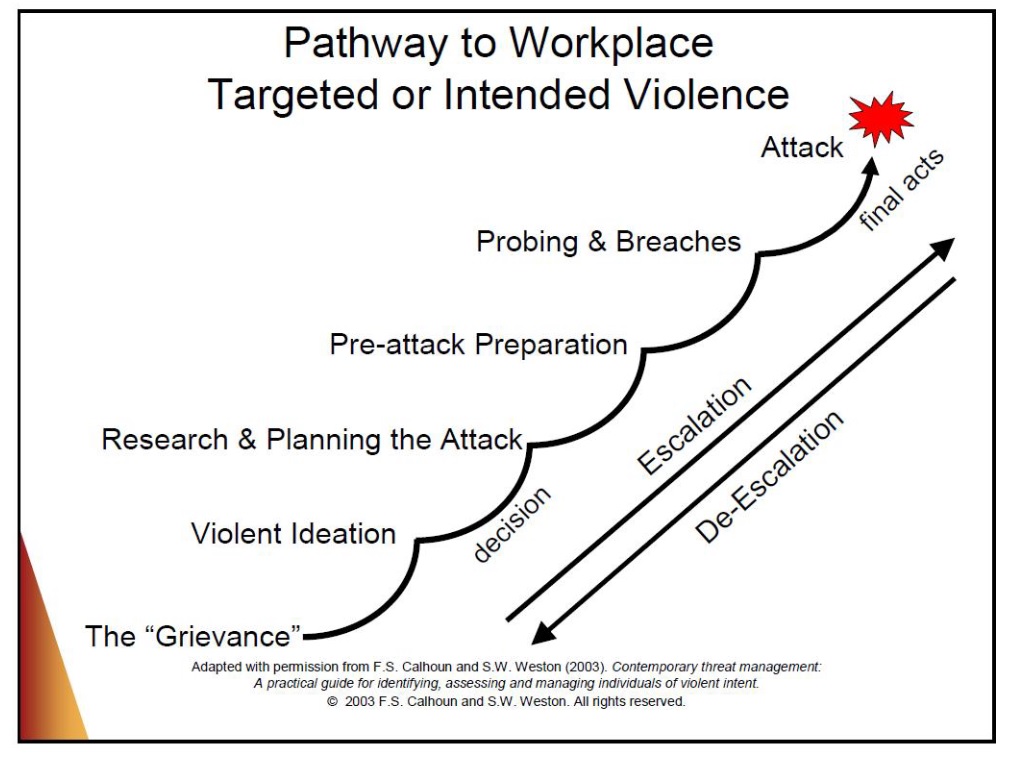 Absorbing CVE components into existing strategies does not, however, imply any substantive change within CVE itself. This effective repackaging is necessary because, as the final framework notes, “separate programs labeled CVE … may have a certain stigma.” In other words, rather than truly pursue programs which may have an objective other than to prevent Muslims from becoming extremists, the Working Group merely insinuates CVE into other strategies, while maintaining the program itself. 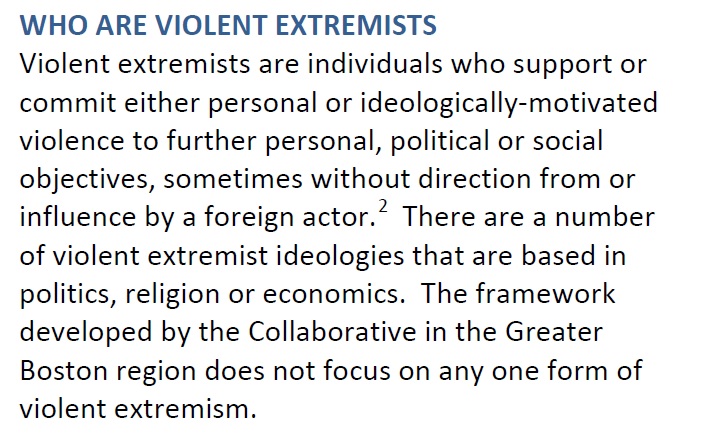 The original impetus for CVE remains “a perceived problem of Muslim extremism,” as Arun Kundnani says. The Obama administration’s Strategic Implementation Plan, for example, explicitly states the priority of CVE is on violent extremism “that is inspired by al-Qa’ida and its affiliates and adherents.” The overarching goal for CVE, as the Working Group notes, is also concerned primarily with violent extremism. The expansive approach favored by the Working Groups, according to Kundnani, seems motivated “by a desire to not appear discriminatory.” 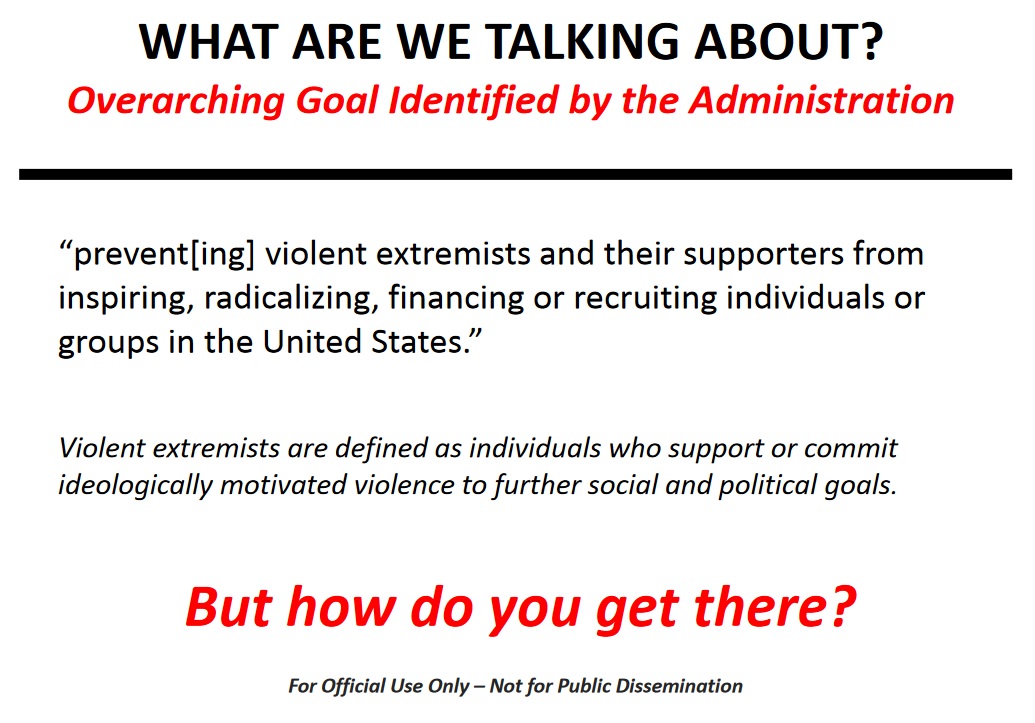 Moreover, continues Kundnani, the choice of locations for the three CVE pilot programs – Boston, Minneapolis, and Los Angeles – has to do with the fact that these locations have “Muslim populations where a problem of extremism has been thought to exist [and] Muslim community activists who have a history of partnering with the federal government around radicalization and extremism issues.”

The same point is repeated is an e-mail on a media briefing and interview Donini-Melanson gave to the Boston Globe’s Shelley Murphy. “In our conversations with the reporter,” reads the e-mail, “we spoke about the importance of civic engagement, public messaging and developing a coordinated approach for identifying and managing concerning … pre-criminal behavior.”

This becomes even more worrying when one considers the role of law enforcement agencies in the strategy. The Working Group is adamant that there is no law enforcement component to CVE and efforts are to be led by local communities and social institutions. 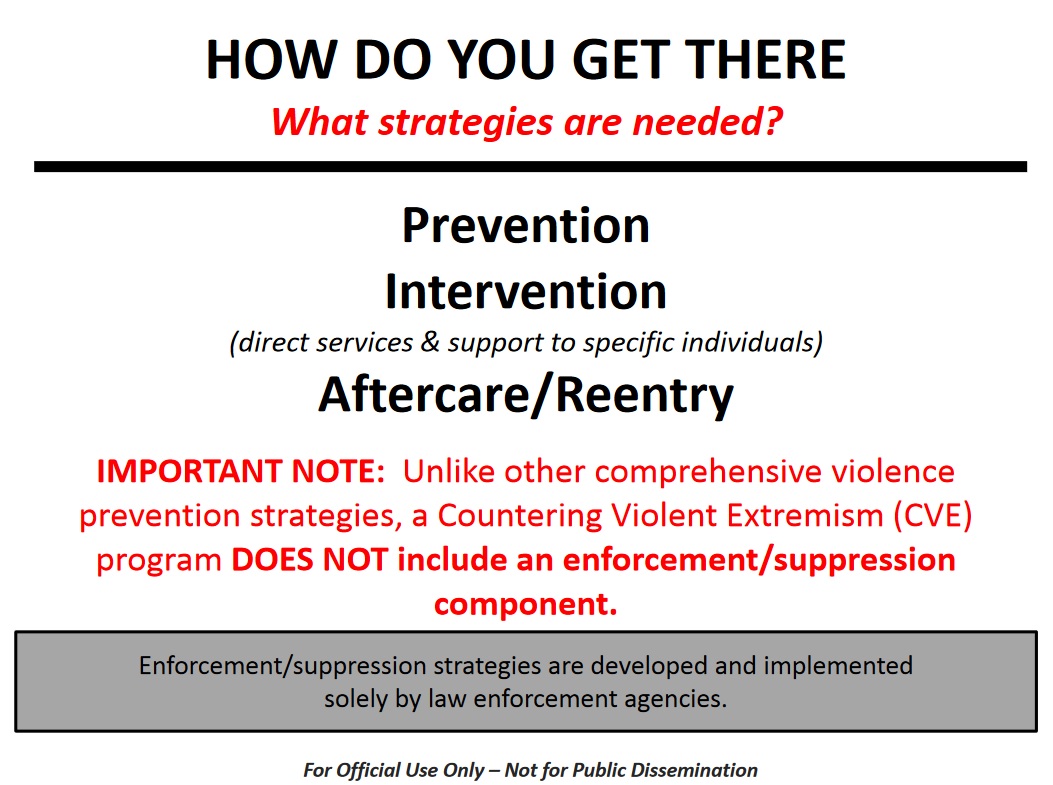 The final framework, for example, advocates for the establishment (or enhancement) of “local multidisciplinary behavior assessment teams” which include law enforcement agencies.

This is concerning not just because it appoints public health officials and school staff as an extension of state surveillance but also because information (or intelligence as it may be more aptly called in this case) collected from schools and public health facilities can be used for law enforcement purposes. As one e-mail from the US Attorney’s Office notes, law enforcement agencies may need “to take a parallel track, particularly” but not only “in instances where behavior begins to escalate toward an actionable threat.”

The Working Group attempts to address the criticism counter-extremism strategies have routinely faced and yet still manages to reproduce tropes about behavioral indicators and maintain a focus on Islamist extremism, demonstrating CVE resistance to reform. The rationale behind the strategy is to prevent violent extremism (specifically Islamist extremism) by figuring out who is likely to carry out such violence and intervene before it occurs. As such it is dependent on indicators, no matter how discredited they may be. These indicators are frequently identified as unpopular political speech, religious expression, and psychological and emotional distress. 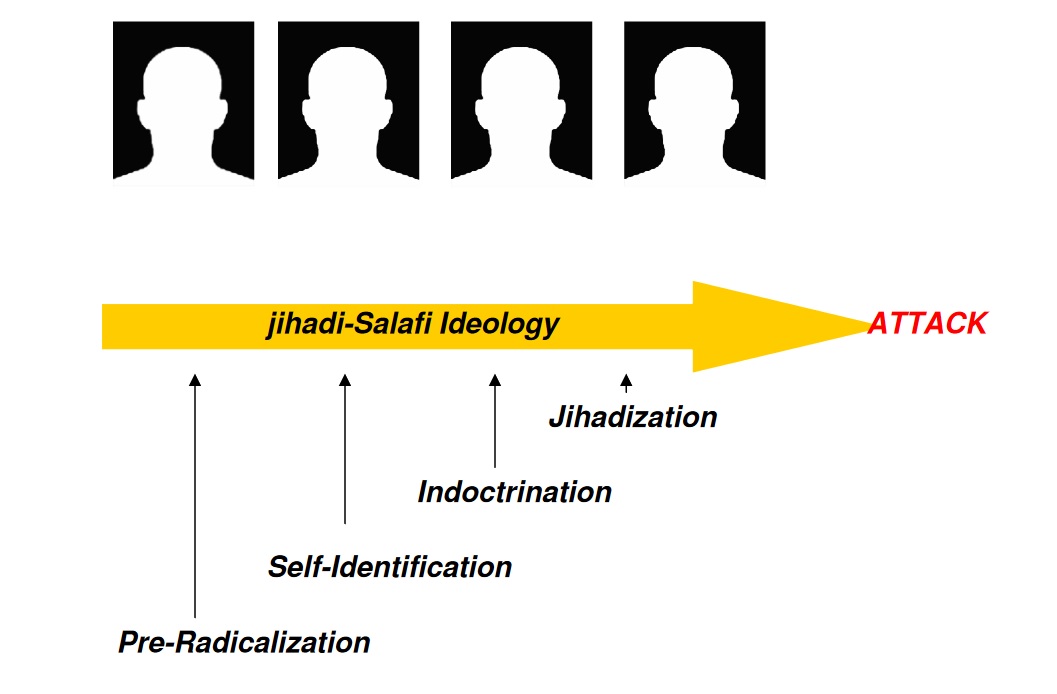 Not only do law enforcement agencies become involved in instances where no crimes have been committed but social institutions and community members also become extensions of the state’s surveillance capacities. Naturally, this constrains political expression and tars American Muslims as a suspect community.

As the Working Group’s attempt shows, when criticisms of the strategy are incorporated into CVE, one is left either with a contradictory strategy or no strategy at all.

The draft powerpoint has been embedded below, and the rest can be read on the request page:

Waqas Mirza sent this request to the Boston Public Schools of Boston, MA

Waqas Mirza sent this request to the Boston Police Department of Boston, MA

Waqas Mirza sent this request to the Cambridge Police Department of Cambridge, MA

Waqas Mirza sent this request to the Boston Public Schools of Boston, MA