According to a White House factsheet, the purpose of the summit was to “discuss concrete steps the United States and its partners can take to develop community-oriented approaches to counter hateful extremist ideologies that radicalize, recruit or incite to violence.”

In many ways the summit was a culmination of years of efforts on part of the Obama administration to develop an overarching framework for CVE. It came almost four years after the National Strategy for Empowering Local Partners to Prevent Violent Extremism in the United States, signed by President Obama in August 2011, which outlined the administration’s intent to “prevent violent extremists and their supporters from inspiring, radicalizing, financing, or recruiting individuals or groups in the United States to commit acts of violence.”

The resulting frameworks vary in format, detail, and length but are all overwhelmingly concerned with building relationships with local communities, identifying factors which indicate an individual’s drift toward violent extremism, and developing methods to prevent such radicalization. In addition to the three pilot programs, various federal and local agencies are also pursuing programs in accordance with the White House’s guidelines.

These include the Department of Justice (DOJ), the FBI, and Montgomery County, MD.

CVE has been roundly criticized by Muslim community members and civil rights groups for a number of offenses. It unfairly targets Muslims as harboring extremist ideologies and prone to violent extremism. As the Strategic Implementation Plan notes, the priority is on “preventing violent extremism and terrorism that is inspired by al-Qa’ida and its affiliates and adherents.”

This is despite casualties from Islamist extremism lagging behind those from right-wing extremism in the United States. The overwhelming focus on Muslim communities has the additional effect of perpetuating Islamophobia and contributing to a climate which enables hate crimes against Muslims by private actors.

While the Minneapolis Framework boasts of local law enforcement agencies’ “long histories of effective community outreach” and “solid foundations of trust,” the ease with which past efforts have turned into intelligence gathering operations hardly inspires trust. A $670,000 grant from the Department of Justice in 2009, for example, was intended to promote the St. Paul Police Department’s (SPPD) “involvement with the Somali/Muslim community” in order to “prevent further radicalization of our youth…”

The grant proposal, however, explicitly notes that the SPPD would “seek to gain the trust of the Somali immigrants” and “identify radicalized individuals … who refuse to cooperate with our efforts;” thereby increasing “law enforcement’s ability to maintain up-to-date intelligence on these offenders.”

Furthermore, CVE’s broad focus on Islamist ideology rather than Islamist violence entangles government agencies in awkward theological debates about the right interpretations of scripture. In order to combat the influence of extremist ideologies, the government claims the right to promote an official or mainstream interpretation of Islam, advancing one set of beliefs over others.

More disturbingly, the entire CVE model is based on a theory of radicalization that has been thoroughly debunked. The theory assumes that certain behaviors are indicators of radicalization. As such, identifying these behaviors would allow law enforcement and its partners to predict which individuals within a community will embrace violent extremism. All attempts at identifying indicators of radicalization have resulted in lists of behavior that are common to millions of people, lacking any utility as predictive tools.

Past attempts, however, do illustrate the threat such a theory poses to civil liberties, aside from being factually wrong. The FBI’s 2006 report The Radicalization Process, for example, listed mosques, prisons, universities, places of employment, and internet chat rooms as potential venues “where radicalization can occur.”

This effectively marks Muslims in any of these locations as prone to radicalization. Not to be outdone, the New York Police Department in a 2007 report also added “cafes, cab driver hangouts, flophouses, … student associations, nongovernmental organizations, hookah (water pipe) bars, butcher shops and book stores” to this list. It also identified “wearing Islamic clothing, growing a beard, abstaining from alcohol and joining advocacy organizations or community groups” as indicators of radicalization.

More recently, a rating system developed by the National Counterterrorism Center includes categories such as “Expressions of Hopelessness and Futility,” “Parent-Child Bonding,” and “Connection to Group Identity.” A low score in any of these categories supposedly indicates a “susceptibility to engage in violent extremism.”

CVE’s extension into communities and local institutions portends a future where Muslims are under surveillance whether they are in a classroom, hospital, mental health institution, or place of employment. Teachers, doctors, mental health professionals, social workers, and even community members are asked to effectively become extensions of law enforcement. The functions of national security begin to intrude into social institutions, undermining trust and their missions.

The FBI’s Don’t Be a Puppet program, for example, is aimed at co-opting teachers to monitor students. The Massachusetts Health and Human Services has recently become a partner to CVE, raising concerns that health professionals are being recruited to report on patients. 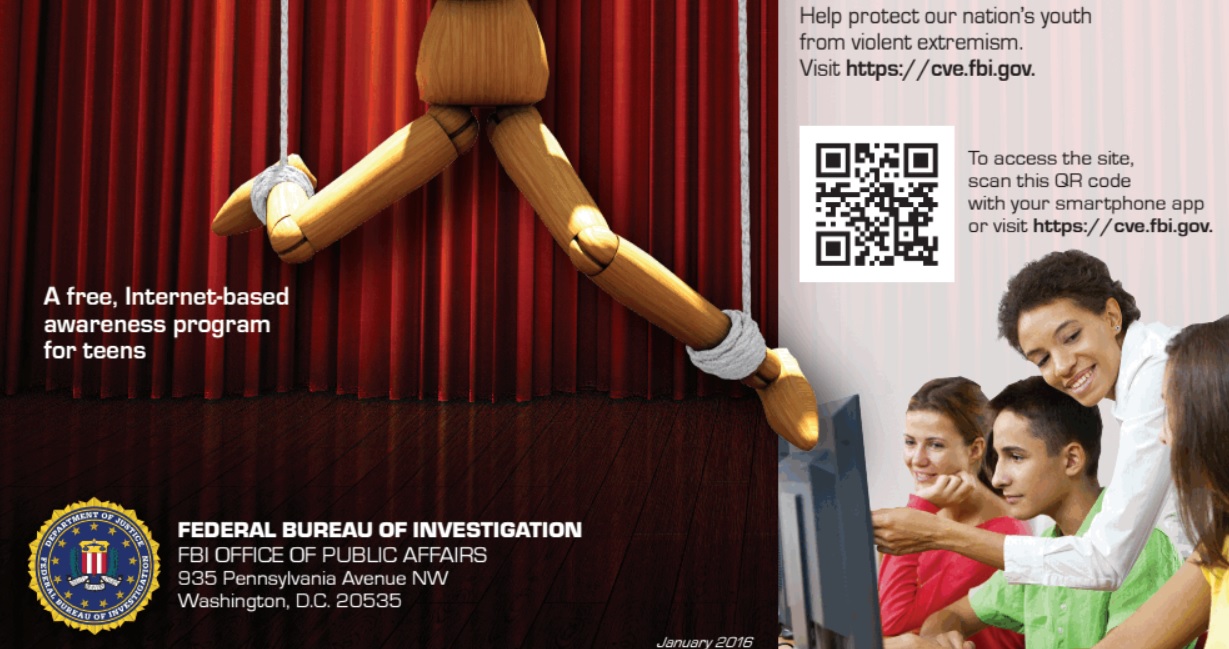 One of the FBI’s plans aims at “institutionalizing an informant system,” establishing groups of FBI officials and community leaders who come together in Shared Responsibility Committees to discuss concerns about specific individuals.

In January 2016, the Brennan Center for Justice at NYU School of Law sued the Department of Homeland Security and the DOJ in an attempt to “increase transparency of the government’s ongoing CVE efforts.” ACLU followed suit the next month, suing several government agencies for records pertaining to CVE and alleging that “nearly all details of the programs remain a mystery.”

The mystery persists despite the high level of funding being made available for CVE. Under DHS’s Fiscal Year 2016’s Homeland Security Grant Program, CVE and related projects are eligible for nearly $1 billion of funding.

There remain lingering questions about precisely which communities are being targeted, what research (and which experts) agencies are relying on for their approaches, how (or if) government agencies are planning to safeguard civil liberties, which community leaders are being supported and for what reasons, etc.

MuckRock’s investigative project on CVE will use the Freedom of Information Act in order to make the relevant government documents public and help answer some of these questions. The project will begin by looking at the drafting process for the frameworks produced by the three pilot cities and proceed to investigate the programs being pursued under those frameworks. It will also include a look at the various programs being developed by other local and federal agencies.

Throughout the project, we will remain focused on civil liberties concerns raised by CVE, the continuing influence of a flawed radicalization model over government agencies, the extension of national security functions to essential social institutions, and the effects of these programs on target communities. As past studies attest, government surveillance has debilitating emotional and political effects on target communities. Given the wide scope of CVE, it is necessary that the program not escape the scrutiny it deserves.

Waqas Mirza sent this request to the Dearborn Police Department of Dearborn, MI