This part 2 of a 4-part series on private prison contracts, going into the hows and whys of awarding a contract. Part 1 can be read here.

A private prison can solve a variety of problems for the government agency in a pinch.

For packed local jail and the overcrowded state system, a private prison can offer a soup-to-nuts package for the right price: construction, the relationship with the local administrators, the management of the inmates, and most liability.

The impetus might come from a prison system at its max, but it might also be spurred from the desire to open or re-open a prison for the jobs it brings and the taxes it creates.

This need is typically turned into a reality satisfied through the contract process, beginning with the Request for Proposal or another equivalent call for bidders in the industry. The RFP and the materials in response are a good place to look for materials associated with any public-private agreement. For our purposes they offer a sense of what our government agencies were asking for in the first place.

The RFP will often contain requirements for the operations of the facility. Expectations of educational programs offered, staffing requirements, and potential penalties are also included as a guideline for expectations.

In Ohio, though the RFP contains pages of related work requirements, the basic needs for securing the contract are relatively limited.

The two requirements depend on a couple of important assumptions. One, there’s the expectation that accreditation of a facility by the American Correctional Association is the best measure by which to assess a facility’s ability to do its job. And, two, that cost savings can be appropriately measured between public and private prisons and that if a company has done it before, it will do it again. So, it’s important to note here, that the bare minimum ask is that the accepted standards-setting body has previously signed off on your services and that some money will be saved in doing the same job.

There’s no real expectation that they’ll “do it better” on any scale that isn’t financial or that they’ll be rewarded if they do.

One State’s Inmate, Another One’s Job 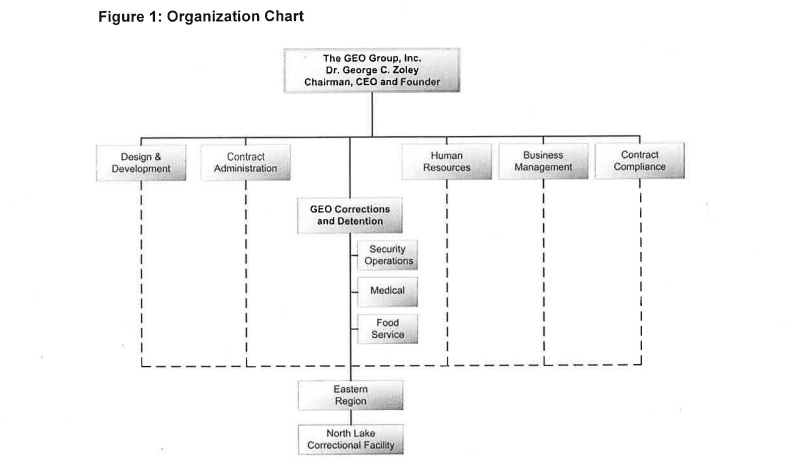 Eloy, Arizona; Baldwin, Michigan; and Millen, Georgia all fall in the short end of the population spectrum at roughly 16,000, 1,000, and 3,000 people a pop, respectively. Rural and already pocked with a private prison, they’re among the towns that have repeatedly returned to a private prison as a way to sustain their community’s existence. (It was reported that 4000 people have applied for the 200 jobs to be available at Millen’s new facility.) They also play host to prisoners from other states, creating an interesting dynamic in which one state’s criminals are another state’s economic base.

The Vermont RFP for their inmates provides interesting insight into how the cost-benefit analysis might be done when comparing proposals. For GEO and CCA, the fact they they’ve managed to acquire so many facilities thus far is evidence enough of their experience operating facilities, though it says little of the quality of that experience (which opponents would say has been riddled in scandal) and the other variables that make the prison experience unique and variably successful. 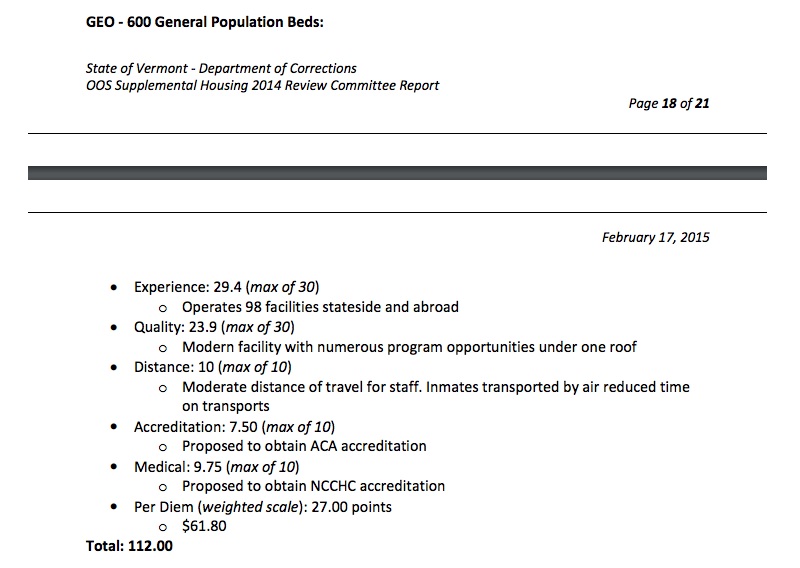 It also illustrates the importance of the other offerings the two major providers have. GEO’s use of airline transport, for one, gives them the benefit of obtaining the possible amount of points in the category of “Distance,” even though their facility is hundreds of miles away from Vermont in Michigan. Those interested in visiting the incarcerated, however, will likely find the 10 out of 10 perfect score in that category inappropriate.

The Savvy of the IGSA

Today, the Federal government is the largest customer for private prisons, and it’s not difficult to see why that relationship has been able to thrive. There has historically been a lot of overlap between the two groups, given that the hiring pool for experienced executive positions in corrections must draw on the public operators. And this relationship has also allowed the federal government to build on those pre-existing partnerships when they need things done quickly. This is what happened at South Texas Family Residential Center.

When the number of immigrants crossing the southern U.S. border exploded in the summer of 2014, the matter of how to detain them quickly became a matter of concern.

Enter CCA, who already had an agreement with ICE for another facility in Eloy, Arizona. Through an amendment of the IGSA and then some agreements with Dilley itself, CCA was able to get operations up and open in less than a year for 2,400 beds at $68.45.

This sort of maneuver bypasses the typical bidding process, which is a controversial step in such a human-interested industry. What that means, though, is that other deals are initiated. Such as the one with Eloy, who actually held the IGSA with ICE, and with Dilley, site of the new facility, which reaped $120,000 for the agreement and expects $900,000 in taxes. And with limited competition and the ability to provide cash rewards to the towns on both ends of operations, they help larger companies dominate the field.

For any overlap between private and public, in all of the public-private partnerships, there’s an important point for the public to make in how these agreements are negotiated and how expectations are set. Some disagreements may hinge on the very existential appropriateness of the service being requested, but short of dealing with that, there are also terms that our government dictates on our behalf that may not be so appropriate across all industries at all times.

Are staff shortages at prison facilities worthy of more rebuke than similar shortages at cargo warehouses or non-human enterprises? Now that the agency has made its decision, to what are the parties actually bound?

In part 3, we’ll look at the language of the contracts and what is, and isn’t, included.

All contracts and amendments between ODRC and CCA for Lake Erie

Beryl Lipton sent this request to the Dilley City Secretary of Dilley, TX