When Corrections Corporation of America (CCA) bought the Lake Erie Correctional Institution (LaECI) from the Ohio Department of Rehabilitation and Correction in September 2011, LaECI became the first state prison to be sold to a private company. Just that August, the State’s Correctional Institution Inspection Committee (CIIC) had given the facility—then operated by Management and Training Corporation (MTC), another private corrections group—a positive review during its unannounced visit. Excepting concerns about staff/inmate communication, the CIIC noted that “the inspection was very positive” and the space “clean and well maintained without any major concerns.” By the next inspection, after a full year of CCA operation, the tone had changed.

Surprisingly, though, the American Correctional Association (ACA), the organization responsible for providing and maintaining the correction industry’s standards, saw little in the way of quality degradation, awarding LaECI near perfect compliance yet again.

The contract for the purchase of the facility and assumption of its operation contained just two mandatory requirements for the purchaser of the property: financial ability to assume ownership at a savings to the state and evidence of prior appropriate ACA accreditation. 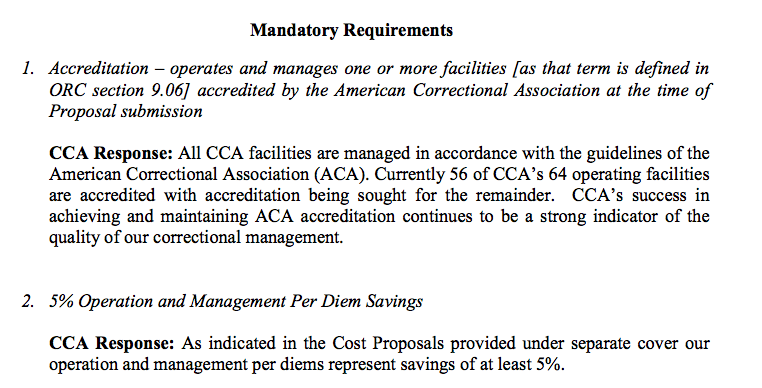 As a request for LaECI’s ACA accreditation materials awaits response, it seems important to note that, at the time CCA was making its bid, Executive Vice President and Chief Corrections Officer Harley G. Lappin was still new to the position - he had recently left his post as director of the Federal Bureau of Prisons and was serving as the Chairman of the ACA’s Standards Committee. After the acquisition of LaECI, his name graced a letter sent to governors of other States inviting them to sell their own facilities to CCA.

The same month CIIC reviewed for the LaECI under it’s new management, CCA and another major private prison player, GEO Group, both announced that they were in the process of restructuring their businesses as a Real Estate Investment Trust (REIT). The designation is meant to remove the burden of taxes from income-generating real estate, the idea being that the primary function of CCA and other privately-run corrections groups is to provide a space that is essentially “rented” to house inmates.

The first 2013 CIIC inspection of LaECI was negative enough to warrant a second inspection later that year, a review that suggested improvement and allowed for the transitional period the facility was undergoing. Soon thereafter, CCA announced that LaECI would be getting a new warden.

As part of the initial contract, CCA was supposed to submit personnel resumes and references, but a request for those materials has not yet received a response.

A survey for the January 2013 inspection resulted in a negative outlook upon the inmate grievance process, a topic MuckRock has touched on before. We are still waiting to receive any grievances from the DRC (the reports specifically number informal and acted upon grievances). The inspection notes mention poor medical treatment as part of the inmate surveys.

One particular complaint we were able to obtain from the Office of the Inspector General involved an instance of “forced catheterization” upon an inmate who was required to give a urine sample.

MuckRock is still waiting to receive communications about CCA’s subsidiary medical arm, which handles treatment within the facility.

In addition to concerns within the facility regarding the safety of both the inmates and the staff, the area around Lake Erie has experienced an elevated need for police attention. Since the transfer of authority, there has been a spike in calls of service to the Conneaut Police Department and the need for perimeter patrols. However, the Police Department has not billed the prison for any additional coverage, though they are permitted to do so should the facility become an undue burden on the departmen.

It is not yet clear how the prison is monitoring itself, as the audit reports that are supposedly made biannually are not provided to the state.

In fact, it seems that very little of the material that CCA promised as part of its Request for Proposal (RFP) has been provided, and that the state itself may not have conducted all of the necessary due diligence associated with the collection of references and recommendations.

We’ll continue to follow up with the paper trail that should have been created as part of the contract between the State of Ohio and Corrections Corporation of America. In the meantime, any interesting leads, suggestions, insights, etc. are, as always, greatly appreciated. Feel free to send them our way at info@muckrock.com or beryl@muckrock.com. Alternatively, start digging into a correctional system near you by signing up and making a request.

This piece is part of the Private Prison Project

All contracts and amendments between ODRC and CCA for Lake Erie