During his nearly forty-year reign as director of the FBI, J. Edgar Hoover annotated thousands - if not millions - of pages of memos, reports, and other documentation, all is his immutable loopy cursive. Though the vast majority of the notes are procedural - forward this, cross-reference that - even now and then, Hoover would get a little … catty.

Here’s who set him off, and why.

Ben Bradlee — “I would trust him as much as I would a rattlesnake.”

You can read more here, but the short version is, Hoover and the press just did not get along. And that went double for the press in Washington. Case in point -

He was decidedly not a fan of that newspaper, which had the habit of prematurely announcing his “retirement” every couple years. Also included in the file - the last of his personal records before his death in 1972 - is the text of a speech he gave at the American Newspaper Women’s Club. In it, he makes a joke that “he doesn’t suffer from heartburn or gastric acidity,” with a handwritten note adding “except when I read …” Though the offending material isn’t legible, it’s not hard to take a guess.

Anonymous Slanderer — “Put up or shut up. He is a vicious and garrulous old gossip.”

Also from Hoover’s personal files is this note regarding an unnamed source who claimed to have some incriminating diary entries regarding Hoover’s “little parties at the Knickerbocker.” Hoover appeared to be unimpressed, and the source is not heard from again. Looks like whomever this was picked “shut up.”

Claudine Longet — “She is not a singer; she just whispers her songs.”

From yesterday’s piece regarding the actor Efrem Zimbalist, who portrayed an FBI agent on ABC’s The FBI for nine years. Zimbalist is preemptively reaching out to the Bureau over a scandalous gossip column which linked him to the chanteuse, at which point Hoover felt the need to weigh in on her artistic merits.

Boy Scouts of America — “Their recent resolution was so general it didn’t mean anything.” 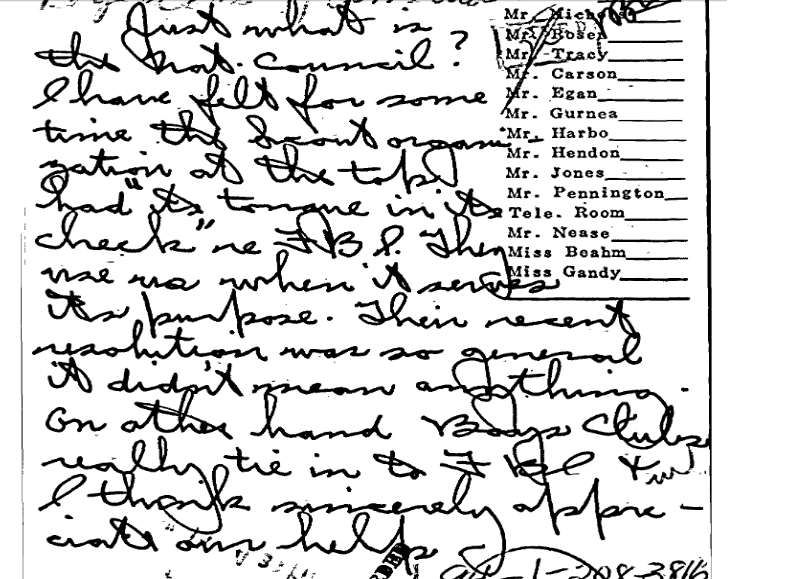 While lacking the same oomph as say, unsolicited musical criticism, context is important to appreciating this one - Hoover is mad that the Boy Scouts weren’t specifically effusive enough in their thank you note, and pointing out that they don’t have to put up with that attitude from Boys Clubs.

Any crank can write a mean note in a margin. Only J. Edgar Hoover could add or subtract points in an imaginary fight among children for his affection.

FBI Files on the Boy Scouts of America