Today MuckRock’s Mara Berg chronicles the saga of a particular public records request I put in for the following:

Unfortunately, while we received (some) of the requested documents, two outside legal experts and the U.S. Marines Corps have warned us strongly against publishing what we have. The reason? Copyright.

Specifically, while the music tracks we received were performed and recorded by the U.S. Marine Band, two of the musical arrangements at least are still under copyright:

It appears that the remaining 37 tracks on the CDs released by the Marine Corps are in the public domain. But since MuckRock allows our users to either release responsive documents in full or keep them completely embargoed, we have decided to embargo all of the tracks in their entirety until our best guess of when each song’s copyright will expire.

And when is that expiration date? That’s complicated, partially since Williams, whose soundtracks often seem to singlehandedly power Hollywood, is still alive: copyright covers the life of the artist, plus 75 years for good measure. We wish Williams the best and, with unbound optimism, hope he will live to 115. Thus we estimate that we’ll be able to post the music in 2122. 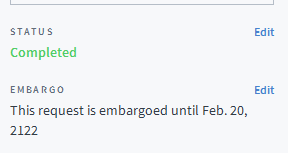 When I asked one of our legal advisors when we could safely release the files, I was told, “Never.”

There’s a reasonable case to be made for why these files can be released by agencies but not publishable by requesters, although it is certainly an odd legal quirk that anyone in the country can file the same request and legally obtain the same tracks, but would likewise be barred from sharing them.

In this case, our choice was relatively simple: MuckRock is a small, bootstrapped organization, and I had filed the request myself and was free to embargo it the same as any of our users. Rather than risk everything we had, I can simply embargo the material and share what I can.

That said, I’d also encourage you to file a duplicate request yourself: there’s an interesting wrinkle in federal FOIA law in that if documents are requested repeatedly (typically three times or more), the agency is expected to post the files online.

Until then, I look forward to celebrating some wonderful public domain patriotism with you in 2122 — unless, of course, Congress graciously extends copyright once more.

What you missed from our FOIA Slack Chat with Mike Masnick