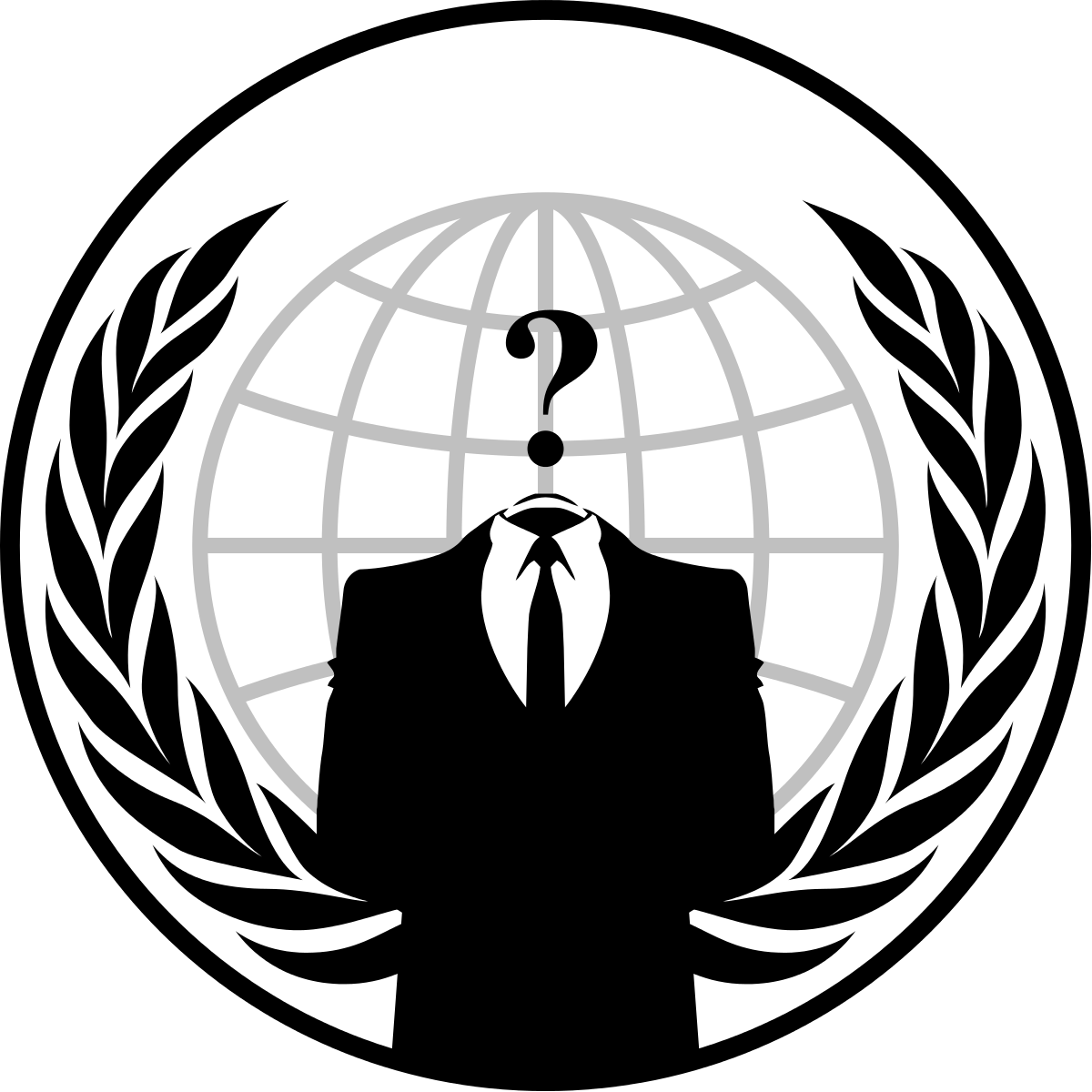 The Anonymous logo itself is licensed under Creative Commons, making it free to share and use. In 2012, however, Anonymous and some of its supporters were upset and vowed retaliation when a French company attempted to copyright the logo for use on some of its shirts. The French company, however, didn’t significantly change the logo. The version found in the DHS presentation was noticeably and significantly modified. As Twitter user @Paulmd199 pointed out, however, it undoubtedly used the Anonymous logo as a starting point, as it incorporates the details on the figures’ upper arms. While the image is subject to copyright, the version in the 2017 DHS presentation lacks the copyright markings of the 2015 version produced by The India Times. 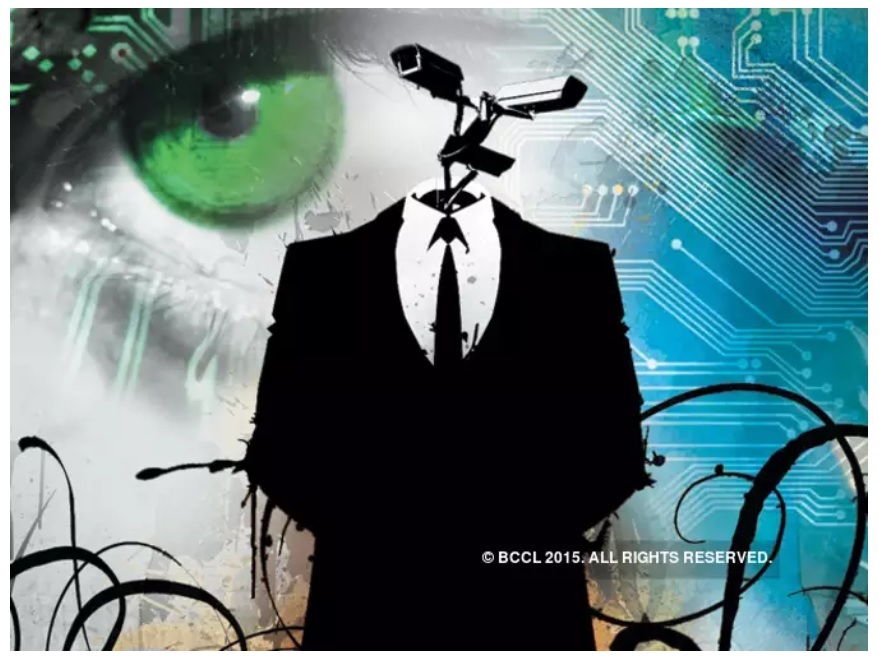 The copyright holder, BCCL, is alternately known as Bennett, Coleman & Co. Ltd and as The Times Group. While BCCL licenses stock images and stock art for public use, this image doesn’t appear to be sold on their website. Instead, it seems to have been produced specifically for the article titled “ISI sought massive intel data collection tools.” 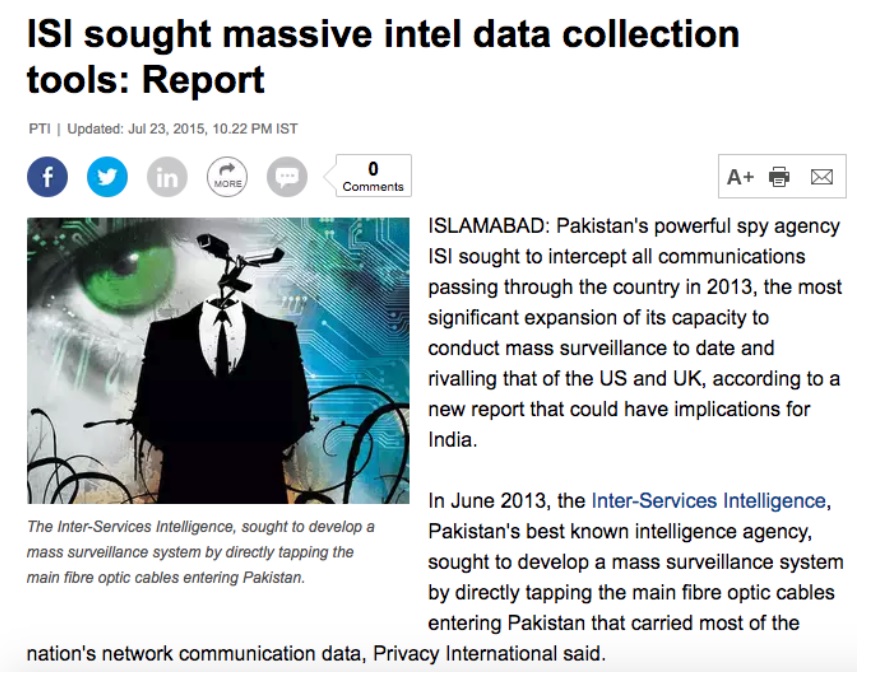 While the modified Anonymous logo used in the DHS presentation isn’t the only preexisting image that DHS appears to have lifted for use in its presentation, it’s arguably the most tone deaf. Anonymous is, largely speaking, anti-surveillance and pro-privacy. The image itself appears to have been specially created for an article critical of Pakistan’s mass-surveillance efforts, an article based on a report that notes the cooperation between American, British, and Pakistani intelligence and surveillance. 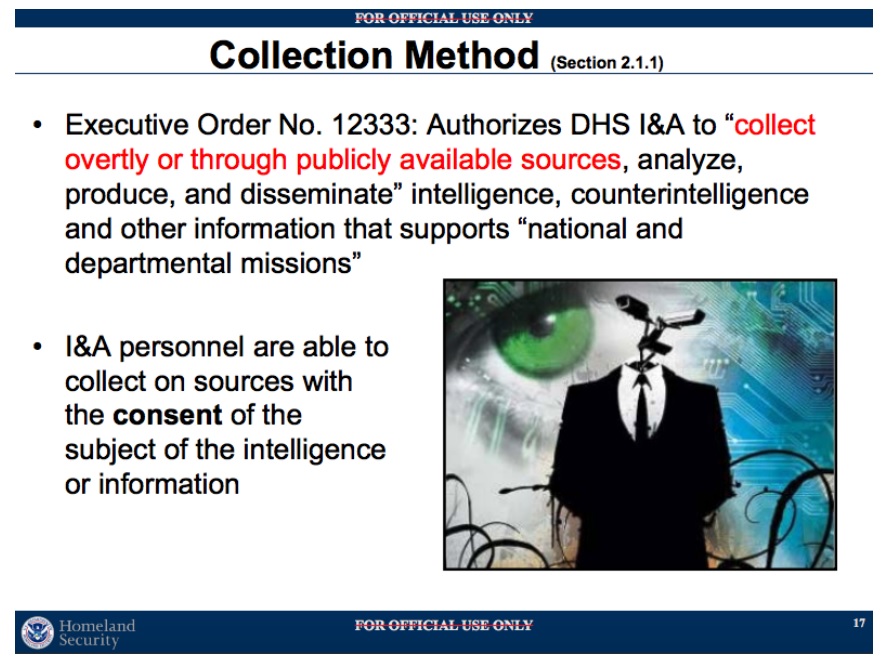 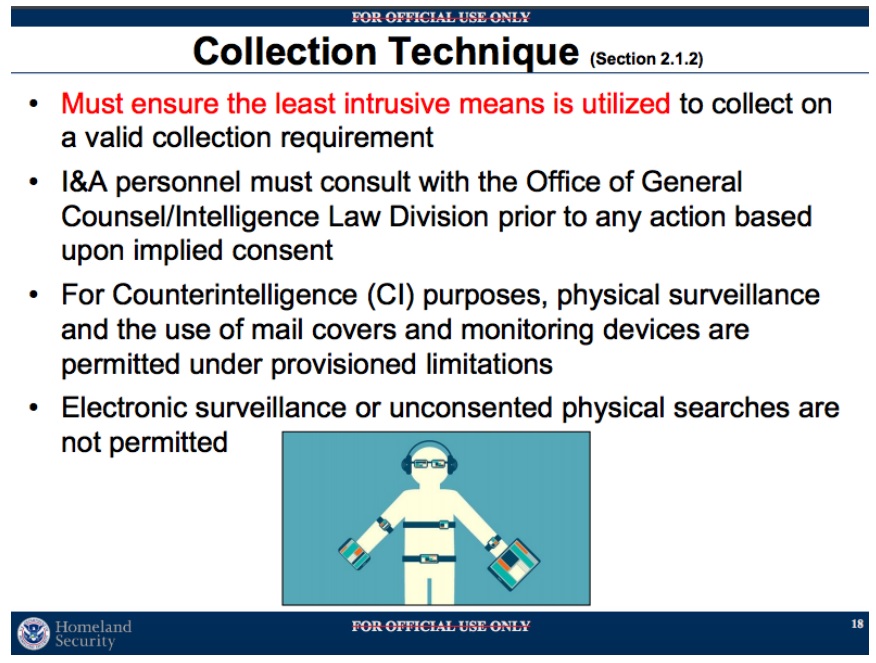 Other slides, at least, have enough self-awareness to acknowledge the Church and Pike Committees’ investigations into “questionable intelligence activities.” 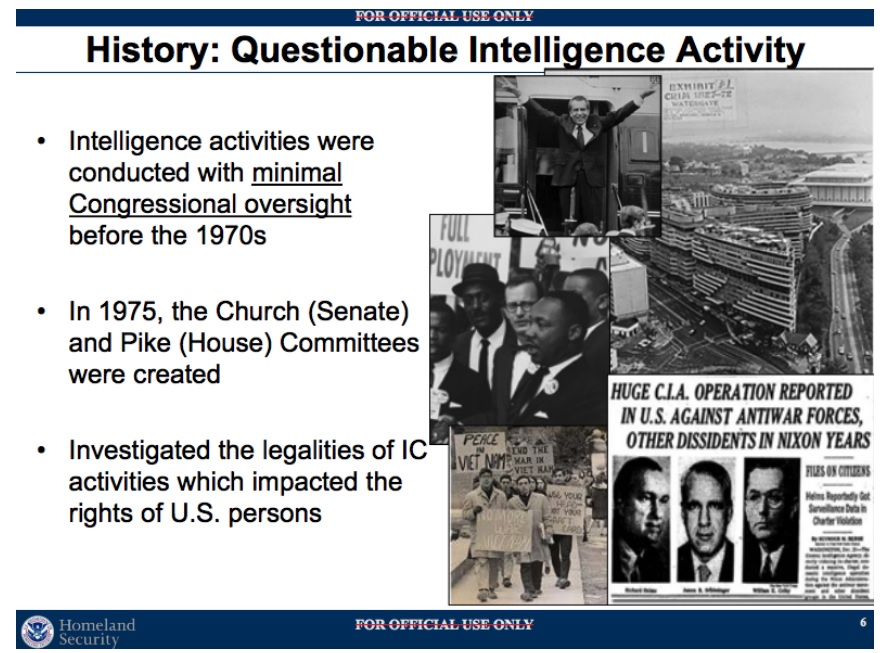 Unfortunately, the presentation treats these abuses belong in the past. 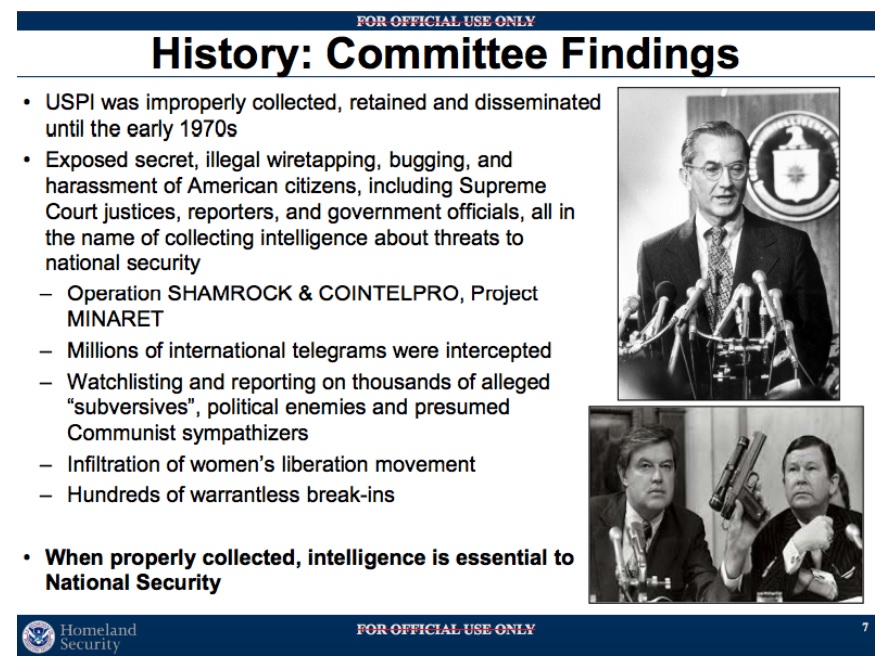 According to the DHS presentation, these issues have been addressed by things like FISA, which doesn’t continue to be controversial and hotly debated at all. 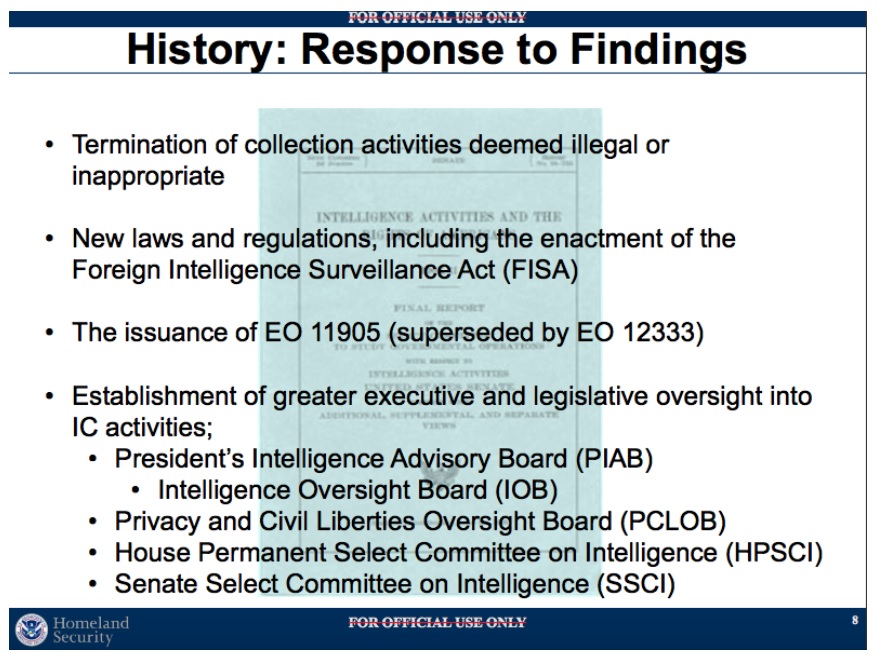 The presentation notes that there is an Intelligence Oversight Board which looks into questionable activities. 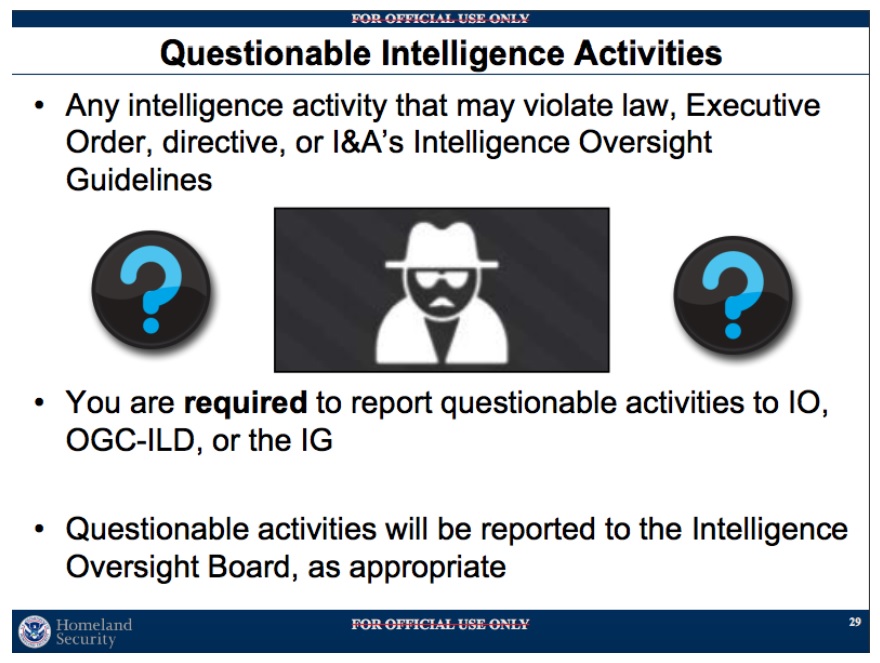 As for who sits on that board, and who watches the watchers and who safeguards the privacy of Americans? That information is restricted to protect their privacy. 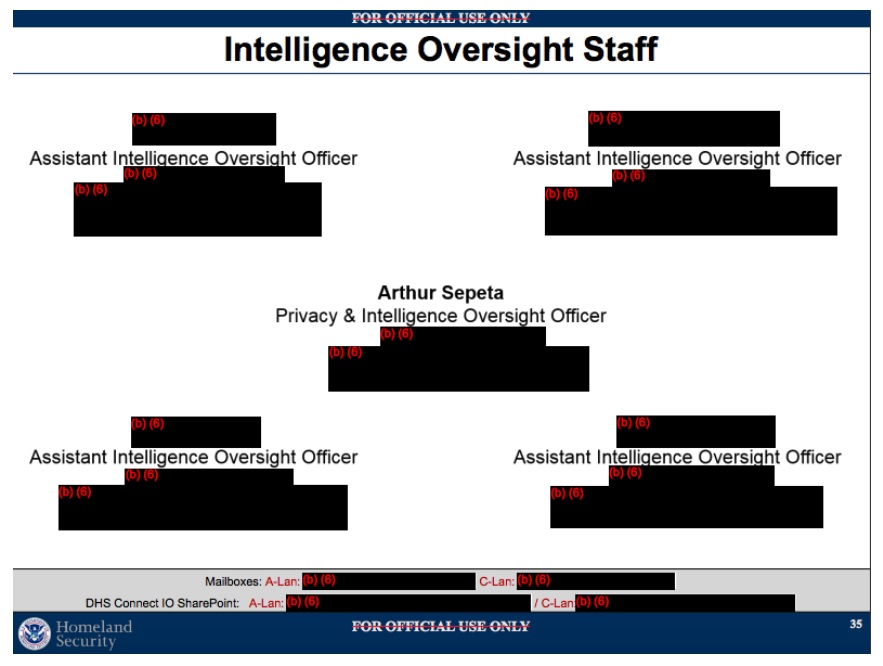 You can see the full presentation below, or on the request page.

Emma North-Best sent this request to the Department of Homeland Security, Office of Intelligence & Analysis of the United States of America