While the Central Intelligence Agency’s efforts to recruit more people of color stretches back decades,those efforts were unfortunately tainted by racism, as demonstrated by memos from the Agency’s chief recruiters in the ‘60s and ‘70s. In one sentence, the Agency recruiter declared that the age of hiring token POC was over. In the next, they declared that hiring POC meant passing over white applicants who were “better qualified.”

One memo, marked Confidential, described a recent conference and opened with references to “hyphenated Americans,” such as Spanish-Americans and Puerto Rican-Americans. The last is especially surprising, as one would expect America’s foreign intelligence agency to know that Puerto Rico was part of America. 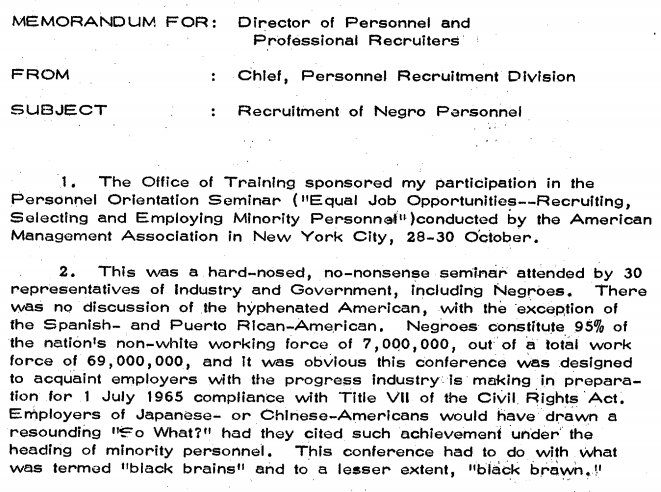 The 1964 memo goes on to state that “the “Negro in positions of visibility” phase” was over and that “the stubborn barriers” POC faced had been “broken down.” It immediately follows this bold declaration by stating that “better qualified” white applicants were passed over in favor of “a qualified Negro.” According to the CIA, this was “discrimination in reverse.”

Later, the memo states that POC “are not given the public relations red carpet treatment.” This apparently coincided with a reduced (not eliminated) “so-called “Red Carpet Treatment” accorded [to] white graduates.”

The Agency’s chief recruiter apparently needed to be told to “start with the best-qualified Negro you can find.” This insight was apparently counterintuitive enough to the recruiters that it was memorialized in writing and passed on to others.

The memo then states that the conference “did not [say]… that it takes a Negro to recruit a Negro.” Nevertheless, “it was made clear” that recruiters should bring “a satisfied Negro employee” for best results.”

The chief recruiter then noted that everyone at the conference agreed that “the Negro does significantly poorer on every test.” According to the CIA’s chief recruiter, this meant that “hiring a qualified Negro when a better qualified white applicant is available.” They saw this as “discrimination” against white people for “corporate image.”

The memo also argued that POC “flunk tests with great regularity” because they were taught not to try. While expectations can play a role in this, it’s now widely acknowledged that these tests are racially biased. As noted by some, this was not incidental but deliberate and used to reduce the number of POC admitted to higher education.

The conference apparently convinced the Agency’s chief recruiter that POC were too ignorant to be properly grateful. According to the memo, “the Negro not only never had it so good but doesn’t really know how good he now has it.”

The Agency’s chief recruiter then goes on to over-sexualize black women and state that their attractiveness was the only reason they would be hired. Hiring “an especially attractive Negress secretary in the boss’ office” was apparently a technique justified by unnamed black leaders. The same paragraph concludes by stating that “painting out the “White Only” signs with transparent paint is losing its touch of humor.” Despite the exceptional degree of ignorance and racism built into that statement, the end of the sentence manages to exceed it by saying it was no longer appropriate to ask where “the spear-rack” should be put.

The memo concludes by stating that the Agency’s idea of a woke approach to the matter had been “over-tones of non-aggression” towards POC.

Eight years later, an administrative memo written by the Agency’s deputy recruiter showed few signs of improvement in terms of their attitude. The first thing the memo communicated to the Agency’s Director of Personnel was that “there are relatively few qualified blacks” who the Agency could hire.

The memo goes on to once again note “a form of reverse racism,” manifested by an claim that the University of Chicago pays “new black teachers 20% more than… whites with equivalent credentials.”

On the positive side, in terms of the number of POC employed by the Agency, there was apparently marked improvement despite the claim that when it came to POC, “the average quality of applicants is low.”

The memo concluded by noting that the Agency was “more receptive to black candidates” than it had been the year before. The Agency even had “a full-time black recruiter,” a boast reminiscent of their idea that “it takes a Negro to recruit a Negro.”

You can read the complete 1964 memo below.