In early 1983, FBI agent Don Levy, went to the CIA’s Polygraph Training School to deliver a speech on “Terrorism in the U.S.,” with a large focus on violent unrest in Puerto Rico. A copy of the speech, released through CREST, gives us new insight into the history of FBI’s counterterrorism views and approaches - recognizing the U.S.’ role in fostering terrorism, if not its responsibility.

The speech began by addressing the complexities of terrorism and attempts to define it. “Terrorism,” Levy says, “is defined as the unlawful use or threatened use of force or violence against persons or property to intimidate or coerce a government, the civilian population, or any segment thereof, in furtherance of political or social objectives.” [Emphasis added]

Given this definition, there is no doubt that this should include the most common form of terrorism in the United States - terrorist acts committed by white nationalist Americans against minorities. This hasn’t changed.

However, those incidents are curiously absent from the examples Levy gives.

Also curious is the fact that the FBI’s terrorism statistics at the time contradict the current numbers. In 1983, the FBI listed 29 incidents of terrorism for 1980. According to more recently published statistics, the number is either 23 or 28 incidents, depending on whether or not related same-day incidents are counted separately or not. In 1981, the number varied between 42 (according to the 1983 speech) and 32 or 41 incidents (again, depending on how “separate incidents” are determined). A similar variance occurred for the next partial year observed. 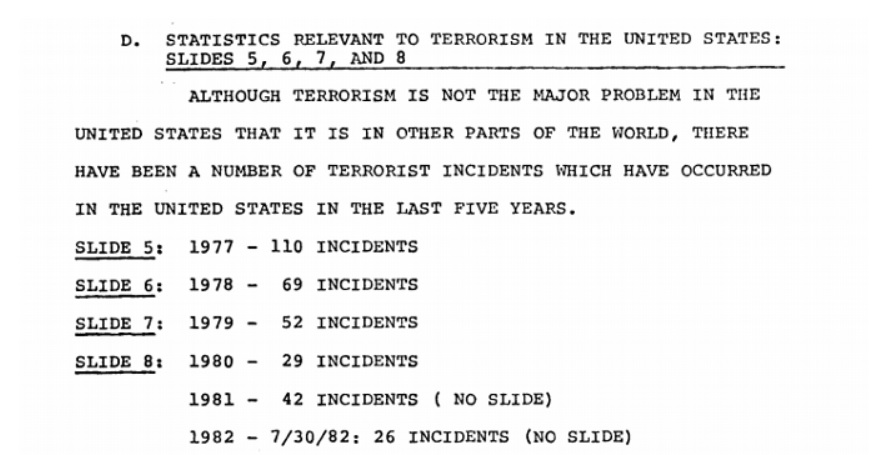 Although the FBI now at least partially acknowledges that a great deal of terrorism in the 1960s and 1970s were committed by hate groups in response to the Civil Rights Movement, in 1983 the FBI blamed terrorism on “the so-called idealistic students who were unhappy with the government.” 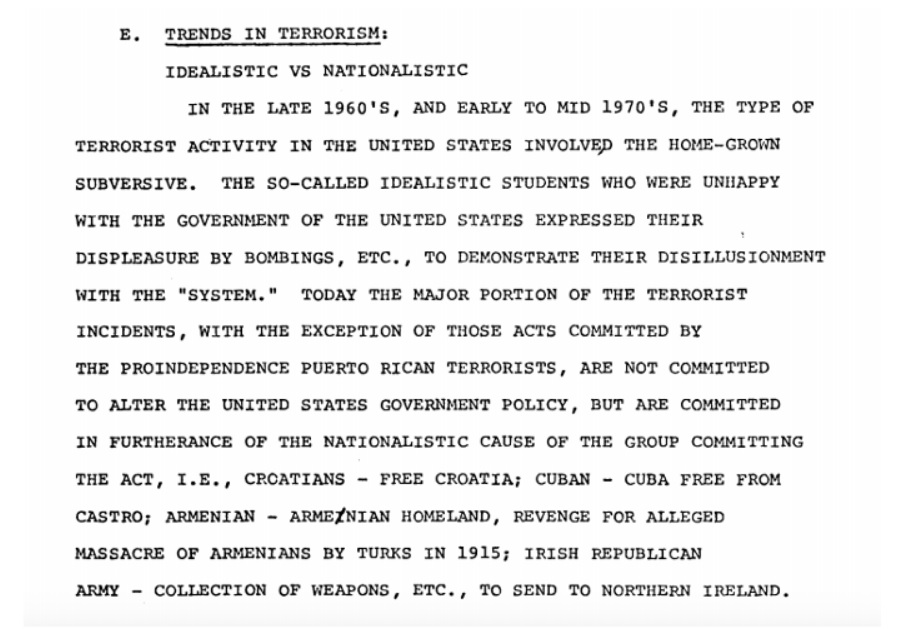 Beyond this, the speech discussed what it considered to be the most severe and dangerous types of terrorism at the time, nationalistic, while also dismissing several causes for terrorism. While you can argue as to whether or not these causes might not justify armed action, questioning the existence of the Armenian genocide of 1.5 million people by calling it an “alleged massacre” almost 70 years after it happened shows how the FBI and the U.S. Government looked at these issues.

Possibly more alarmingly, the FBI traced the roots of Puerto Rican terrorism - which becomes the focus of the speech - to the United States’ own (debatably legal) foreign policy. Puerto Rico’s struggle for independence and sovereignty began years before the U.S. became involved. In late 1897, Puerto Rico finally achieved this as Spain recognized the independence of the Republic of Puerto Rico. However, when Spain was defeated in the Spanish-American War, Spain decided to “cede” Puerto Rico to the U.S., which accepted ownership of the territory despite the fact that, as the Puerto Ricans pointed out, Spain had no authority to do this. 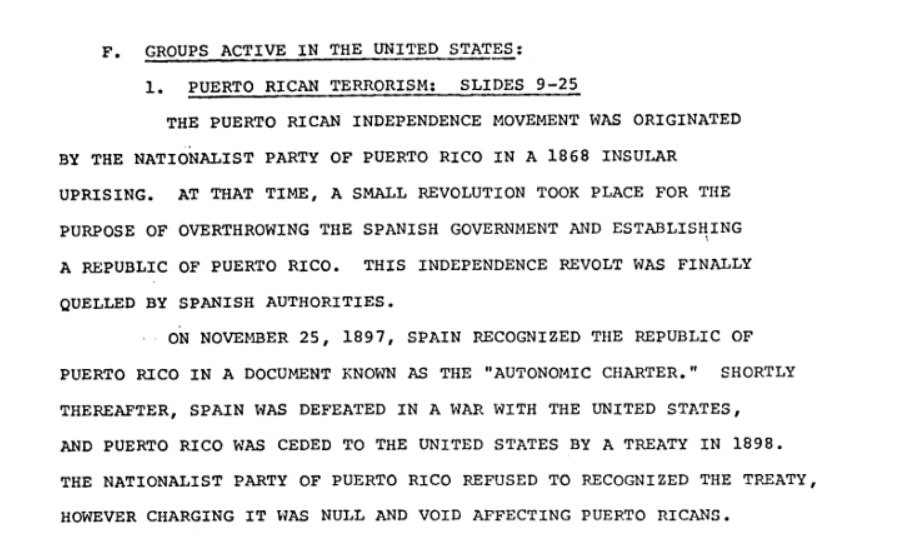 Beginning in 1922, the Nationalist Party of Puerto Rico began attempting to regain its independence through democratic means. After a decade of effort, they concluded such efforts were a waste and decided - in the tradition of the American Revolution and many others - to opt for violence to secure their independence.

According to the FBI, this was the beginning of Puerto Rican violence in the United States and the cause for decades of additional conflict.

Beyond this matter-of-fact statement, the FBI’s speech presented by Leavy gave no sign of acknowledging that America’s ‘Puerto Rican problem’ was both entirely self-created and easily resolved by simply restoring independence to Puerto Rico - or at the very least allowing their Representative in Congress to actually cast a vote alongside the other Congressmen and women.

You can read a copy of the full speech below.