We’ve all seen the lines of police at protests donning head to toe armor, batons and/or launchers at the ready, glowering down at protesters through face shields. But how much does all that gear cost? According to the early returns on riot gear budgeting requests we have been filing, quite a lot.

The Austin Police Department, for example, has spent about $1.1 million in the last five years on everything from bean bag launchers, smoke grenades, and pepper spray launchers, to plated body armor, helmets with protective visors and throat guards, and aluminum batons.

El Paso and Denver Police also spent a little over $1.1 million dollars each - DPD decided to exempt the individual breakdown of where the costs were coming from, instead just telling me the breakdown for each year. 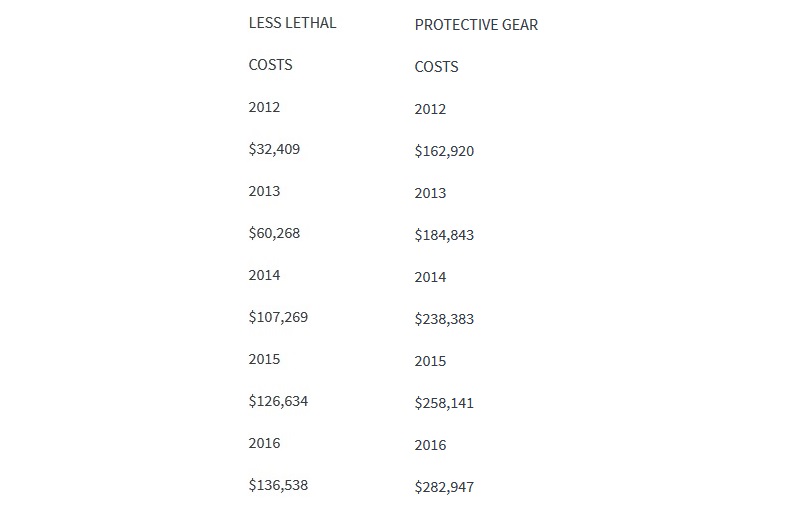 El Paso seems to have spent more on gas masks and rubber bullets than other police departments that has responded so far, along with lots of armor, and lots of different delivery mechanisms for hurting people, such as tear gas, pepper spray, and flash bang grenades.

San Jose Police were perhaps the biggest spenders since 2012 - after compiling over 120 pages of purchase orders, invoices, and grant reports, I totaled about $1.3 million worth of riot gear - and that’s after subtracting things like bomb squad vests that I felt didn’t fit the definition.

Like the other departments, it’s a split between protective gear and less lethal weapons, with San Jose, to their credit, spending less than its peers on weaponry, and more on body armor. It also should be said here that for the years 2015 through 2016 the City of San Jose gave SJPD a $530,000 budget for protective gear alone.

Nearby Oakland police, however, appears to have spent a fraction of that amount - the only documentation provided was a bill for $104,000 dated from February of this year, for SWAT team replacement uniforms, purchased through the use of JAG (Justice Assistance Grants) funds. Nothing else was produced for the years preceding.

It’s important to note that OPD has been under federal oversight since 2003 - so while it is entirely possible that they may have wanted to spend as much as SJPD, they might not have been able to because of a federal court overruling them.

How much is too much riot gear? It’s hard to say, but considering that most of this equipment really has very few applications beyond large protests, and in a nation where education systems, healthcare, and infrastructure (to name a few) are all woefully underfunded, hundreds of thousands of dollars a year to outfit individual police officers comes off as excessive.

Image by Jonathan McIntosh via Wikimedia Commons and is licensed under CC BY 2.0

Curtis Waltman sent this request to the Austin Police Department of Austin, TX

Curtis Waltman sent this request to the Durham Police Department of Durham, NC

Curtis Waltman sent this request to the Houston Police Department of Houston, TX

Curtis Waltman sent this request to the Oakland Police Department of Oakland, CA