A decade after Congresswoman Abzug had struggled with CIA Director George Bush over the destruction of evidence of CIA wrongdoing, the Agency’s Office of the Inspector General ignored the moratorium on destruction of relevant materials and destroyed several memos from the Iran-Contra investigation. When this was raised with the Agency’s Acting Director, it was played off as no big deal and the employees were praised for responding “remarkably well” to the investigation.

When the Independent Counsel began its investigation into the Iran-Contra affair and CIA’s involvement, the Agency’s employees were ordered to cooperate by CIA’s Executive Director, James H. Taylor. As part of this, the Agency’s Inspector General’s Conference Room was converted into the Task Force center for the Office of Independent Counsel (OIC) investigation and personnel were assigned to assist the OIC. 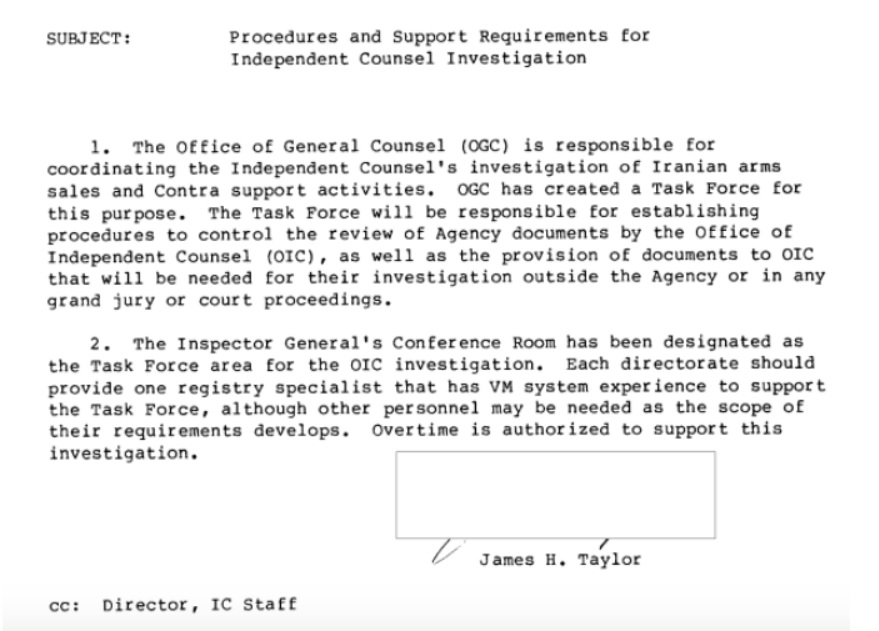 At least two months before this, the Agency had ordered its employees to not destroy any materials relating to the Iran-Contra affair, specifically including “Iranian arms transfers and Central American operations.”

This was not merely an act of ordinary oversight - at the time, the Agency and some of its employees were subject to a criminal investigation. The OIC’s charter was broadly constructed, and authorized them to look into any person or group who violated any laws involving “the provision or coordination of support for persons or entities engaged as military insurgents in armed conflict with the Government of Nicaragua since 1984.” In addition to suspending normal document disposal schedules, all employees were instructed to cooperate fully and to send any inquiries to the OIC or CIA’s Office of General Counsel. A third employee bulletin to this effect was drafted in mid-February 1987. 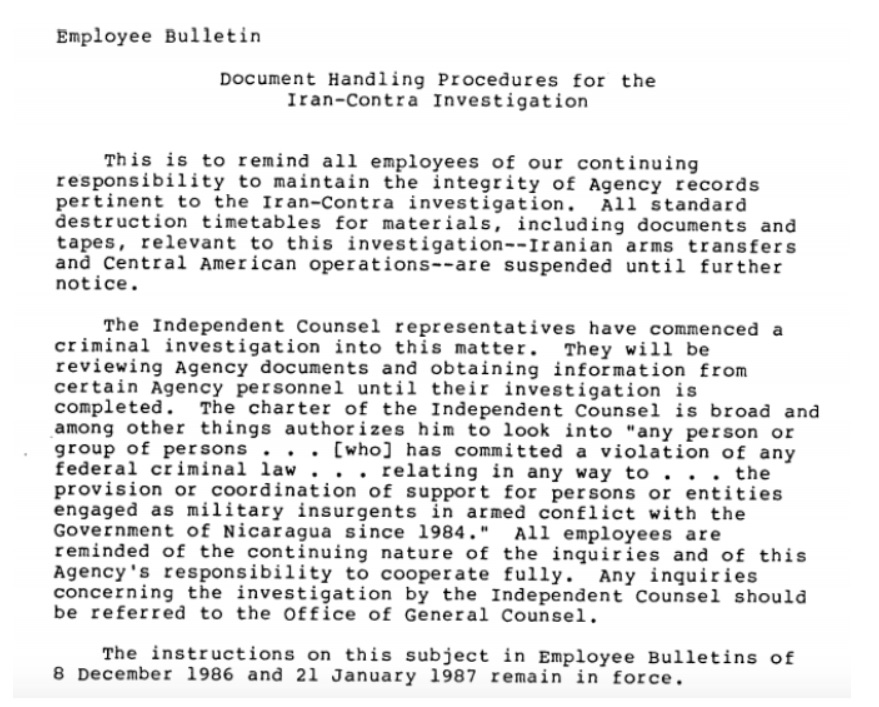 Despite having issued at least three instructions not to destroy any materials relating to Iran-Contra, the OIC learned that the Agency did … well, just that. One, described in formerly SECRET documents, resulted in the OIC complaining to the Agency’s Acting Director. As a result, the OIC planned to investigate the destruction of the documents, and warned the Director that “the destruction of any records relating to this investigation [is] a very serious and disturbing act.”

The issue had already been brought up with the Agency’s Inspector General and with their Office of General Counsel. Of course, the Inspector General’s office had destroyed the records in the first place and subsequently notified the OIC. 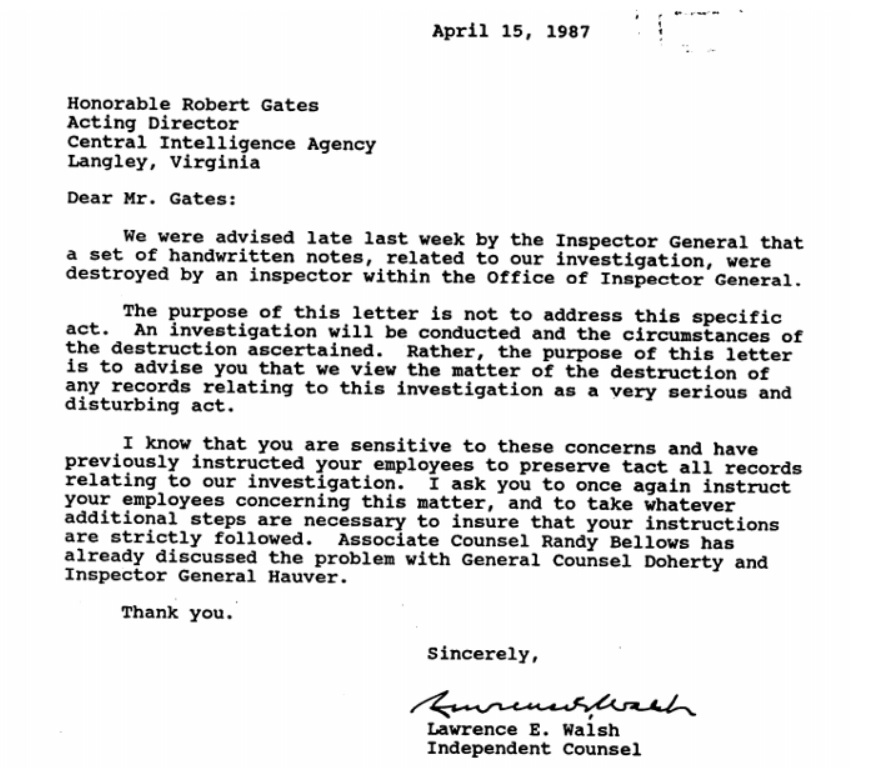 After receiving Lawrence Walsh’s letter from the OIC, Acting CIA Director Gates wrote a five paragraph SECRET memo to the Agency’s different directorates and offices, informing them of what had happened and that Agency employees had apparently ignored the official instructions they’d been given. He also cited the two previous Employee Bulletins and the Headquarters Notice that had been issued on the subject, instructing employees to not destroy any relevant materials. 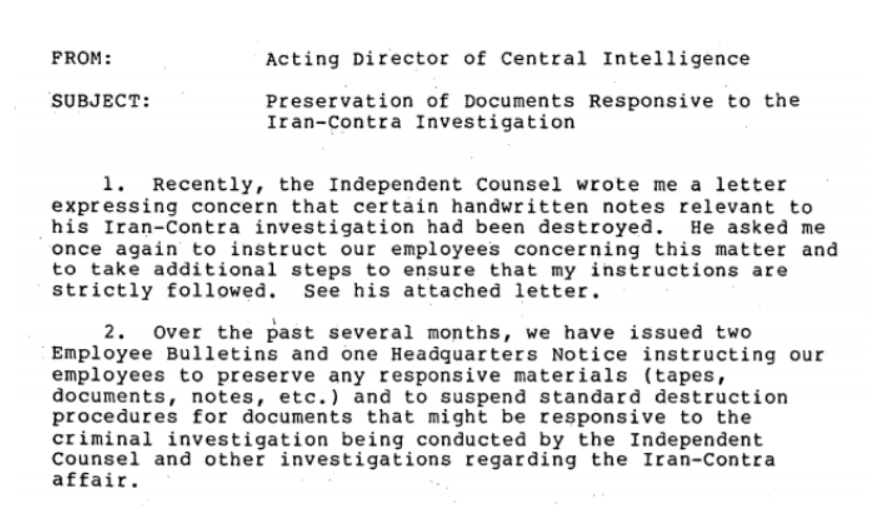 It’s perhaps the third paragraph of the memo that’s the strangest - while it ordered the memo’s recipients to remind the employees under them that the orders were expected to be “taken literally” and that “no relevant records” be destroyed, it concluded with a separate and seemingly distinct instruction. The Deputy Directors et al were urged “to take any additional steps necessary to minimize the possibility that the incident that prompted the Independent Counsel’s letter will reoccur.”

The fact that this was phrased as a separate additional instruction, and that it follows an instruction to not destroy materials, implies that the Acting Director was referring to the actual event that prompted the Independent Counsel’s letter - the Inspector General informing the OIC of the improper destruction of the materials.

The Acting Director continued his memo by pointing out that the destroyed materials “had been shown to a staffer assigned to the Independent Counsel.” While unconfirmed in the memo, the context implies that the staffer was one of the CIA employees assigned to work with the OIC. Gates also noted that a “more complete” memo on the subject had been prepared before the handwritten notes were destroyed. It’s unclear who prepared this “more detailed” memo, but according to the Acting Director’s own instructions this did not actually affect the propriety of destroying those records.

In spite of ignoring instructions and destroying evidence, the memo concludes by praising the Agency’s employees and their handling of the investigation. Gates declared that they had “responded remarkably well” and “should be applauded” for their behavior and support of the OIC’s investigation. 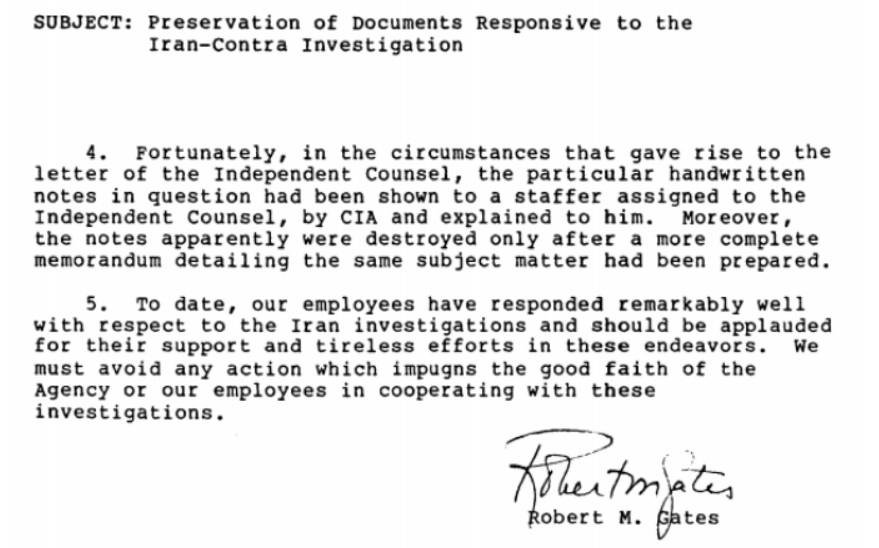 A number of questions linger about this, such as the ultimate meaning of the Acting Director’s additional instruction and how the Inspector General and General Counsel handled the issue. A FOIA request has been filed to learn more, but in the meantime you can read the correspondence from the Independent Counsel and the Acting CIA Director below.