FBI officials fretted over critical press coverage of their interactive website and online game on violent extremism aimed at high school students and attempted to assuage concerns raised by civil liberties and Muslim organizations, according to documents released through a FOIA request by Emma Best.

The website and the online game were immediately met with criticism and ridicule. A letter signed by 19 organizations, including the American Federation of Teachers, the National Immigration and Law Center, and others, accused the FBI website of promoting “bigotry and hatred” and doubling down on “the problematic law-enforcement strategy of profiling.”

The FBI held a meeting with representatives of many organizations which had criticized the website. According to Abed A. Ayoub, the legal and policy director for the American-Arab Anti-Discrimination Committee, the meeting was “very tense” and FBI officials received “blowback from everybody.”

The documents released by the FBI are heavily redacted and exclude nearly every substantial discussion of the website, including meeting presentations and notes, changes proposed by groups, input by students and teachers, and media briefings.

What the documents do show, however, is the clear frustration of many FBI officials due to critical coverage of the website and pushback from civil liberties and community organizations.

One e-mail laments the “unfortunate press” in the New York Times and the Washington Post “as a result of criticisms by several groups” whose “characterizations of the website” it claimed were “very inaccurate.” The e-mail also claimed that such a response was not representative since FBI focus groups with “nearly 50 groups and 200 individuals” yielded an “almost universally positive” response.

Such critical press coverage was foreseen by at least one shrewd FBI official, who, in a response to queries by the New York Times reporter Laurie Goodstein, remarked to colleagues that “NYT should certainly be discouraged from writing a story as they have little to nothing to go on.” 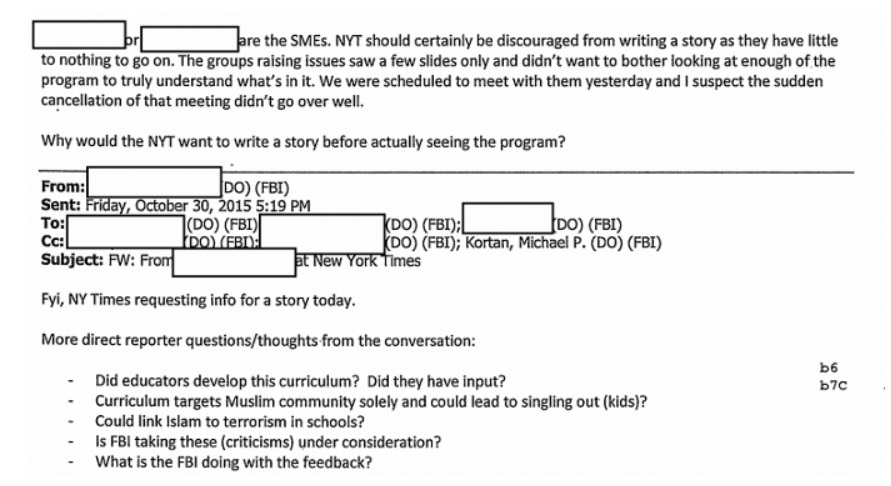 There documents included notes on one meeting with the Muslim Leaders’ Council, perhaps to showcase the “almost universally positive” response to the website, which also derided “self-proclaimed activists who are providing incorrect information to the media.”

Nonetheless, such an “almost universally positive” response by individuals and groups FBI held focus groups with did not solve the Bureau’s “messaging challenges,” for which it ultimately reached out to a woman who worked on the Countering Violent Extremism (CVE) initiative in Montgomery County, MD.

The woman whose name is redacted is likely someone who works for the World Organization for Resource Development and Education (WORDE), which runs a CVE initiative that relies on a flawed theory of radicalization, stigmatizes Muslim Americans, and has the potential to curtail civil rights and political expression and organizing.

The Bureau attempted to confront its “messaging challenges” by replacing at least one “Islamic angle” with a focus on animal rights activists.

Nonetheless, the Bureau ran into an easily avoidable logistical difficulty when it attempted to meet with religious leaders to further its messaging efforts.

One individual invited to a briefing with the Bureau hoped the FBI’s CVE initiative would not brand bearded Muslims as terrorists.

To which an FBI official helpfully responded by stating that “facial hair” would not be a part of the discussion.

While the FBI boasts of holding focus groups and seeking inputs from students, teachers, community leaders, and members of religious organizations, the actual input is curiously not made available to the public. Previously, the Department of Education had rejected a FOIA request for the feedback that it provided to the FBI on its website. The documents released by the FBI also redact all input received from the public but include the consent forms signed by parents of students. 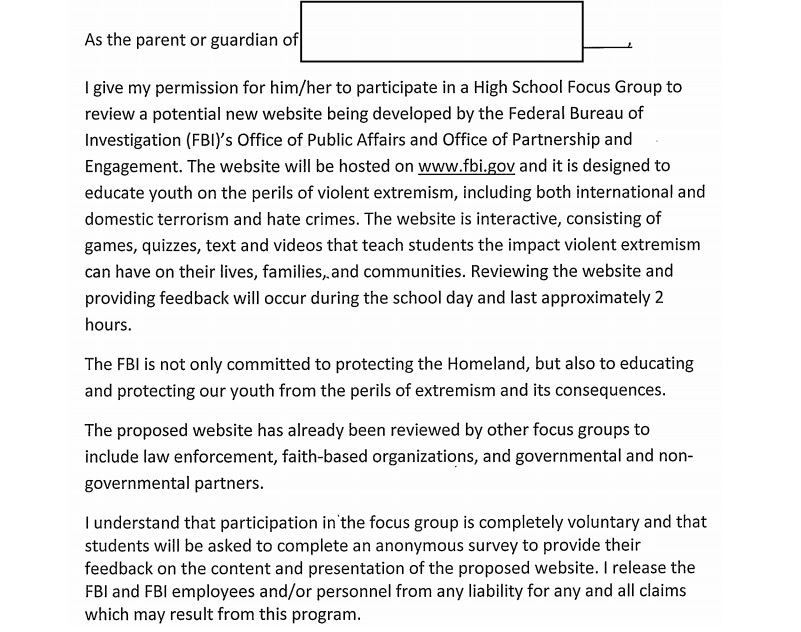 Also included in the documents are the Evaluation Questions asked of members of the focus groups. 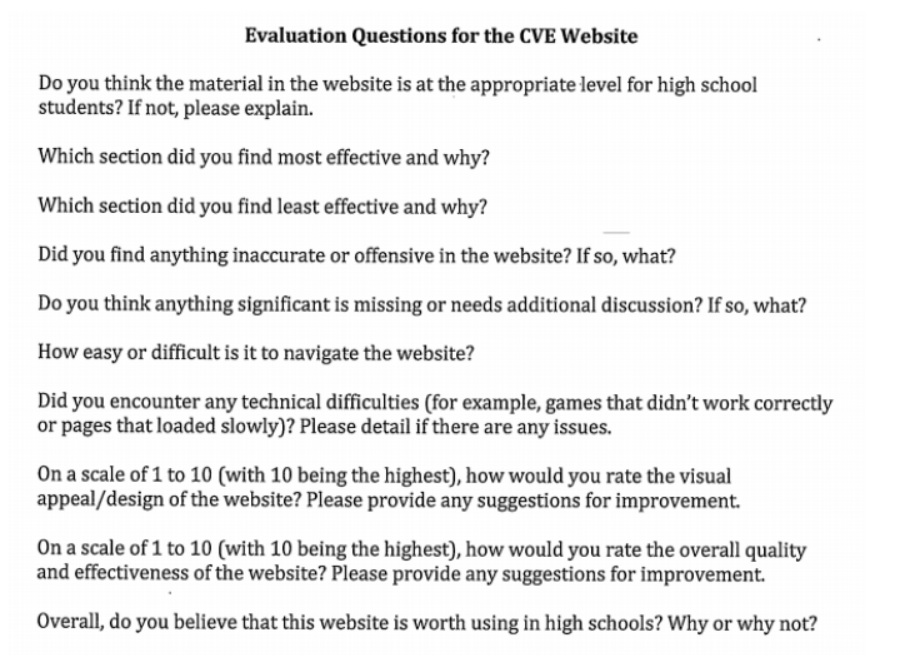 The answers provided by those who responded to the Evaluation Questions are also not included.

The redactions in the documents released by the FBI make it impossible to tell almost anything about the initial conception of the website and its subsequent evolution. There is no way to verify the FBI’s claim that the reception to its website was “almost universally positive” among focus groups as that certainly was not the case among the wider public.

Read the first file embedded below, and the rest on the request page.