During the ’80s, CIA’s efforts to shut down the Government Accountability Office’s (GAO) access to the Agency not only went on unchecked, but reached a new level of success when the Agency convinced Congress to further consolidate Oversight within the intelligence committees. Not only did this nearly cut the GAO out entirely, but it allowed the CIA to spread its exemption to other agencies eager to avoid an audit. 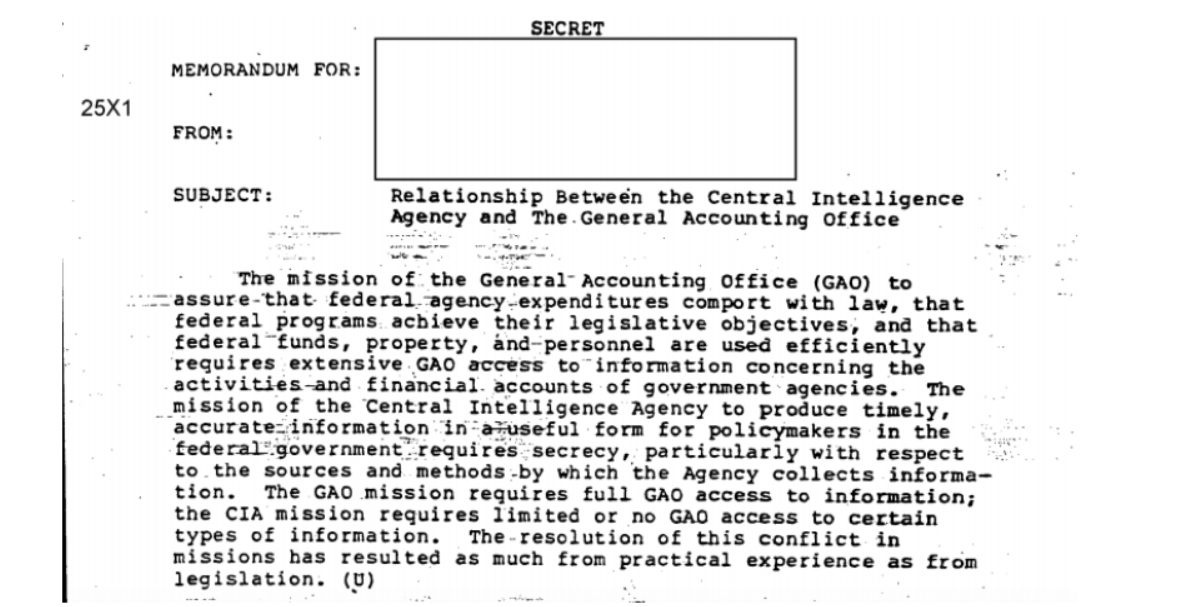 As GAO and CIA entered the ’80s, the GAO did not recognize CIA’s authority to deny the GAO access to information on the basis of protecting sources and methods but rather only for withholding information on unvouchered funds. However, the GAO lacked any “means to enforce its claimed right of access.”

On other matters, such as when GAO made government wide requests, CIA would simpy ignore the apparent requirement that they respond.

The General Accounting Office Act of 1980 reasserted several of these limitations, limiting GAO’s right to access information in ways that directly parallel the FOIA process. If the GAO was denied information, their options to enforce access will be familiar to almost any FOIA requester. The GAO could send a written request which the Agency would have 20 days to respond to. If this failed, they could appeal the matter to senior officials. If this failed to produce results, they could sue over the matter.

The parallels to FOIA were later made overt in a 1984 memo directly stating that the Agency could withhold materials by citing FOIA exemptions b(5), the “Withhold It Because You Want To” Exemption, or b(7).

The CIA’s authority to withhold information on unvouchered expenses, which GAO did not contest, was apparently not being fully taken advantage of by the rest of the IC. In May of 1982, Defense Intelligence Agency Director James Williams wrote to CIA Director Casey arguing that the same exemption be applied to intelligence activities from other Agencies. Casey soon wrote back, agreeing that the issue was “of significance for the entire Intelligence Community” and that he’d tasked the IC Staff to be the focal point for it. The CIA was also quick to note that the the General Accounting Office Act of 1980 provided exemptions not only for unvouchered expenses, but for the President to exempt “any expenditures involving sensitive foreign intelligence, foreign counterintelligence, or sensitive law enforcement investigations from GAO oversight.” The Agency was happy to accept the DIA’s request to coordinate lists of the types of intelligence records which the President should then certify as exempt from GAO oversight while simultaneously ensuring the IC take “the necessary steps to exempt” unvouchered funds. 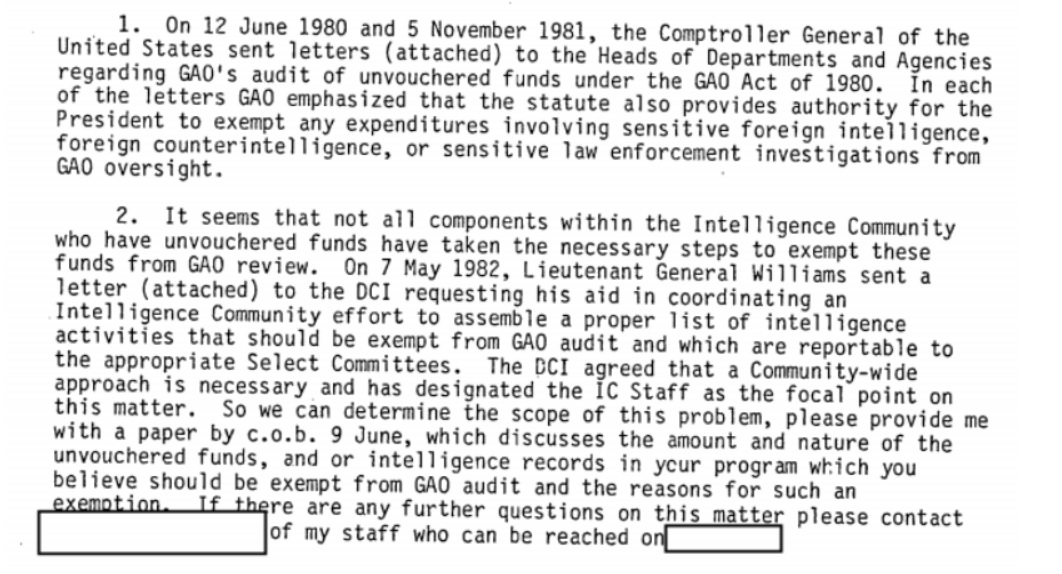 The GAO’s relationship with CIA itself became an issue once again in 1984. By this point, the intelligence committees, liaising with Clair George (who would later be convicted of lying to Congress), “had come to regard GAO not as an organization to supplement their oversight but as a potential competitor to their oversight.” A 1984 CIA memo discussing the background of the CIA/GAO relationship and relevant talking points stated that the Agency was “not enthusiastic about working with the GAO.” Having previously worked to not only reduce GAO’s access but to cut GAO out of negotiations entirely, the Agency continued to attempt to further marginalize the GAO. 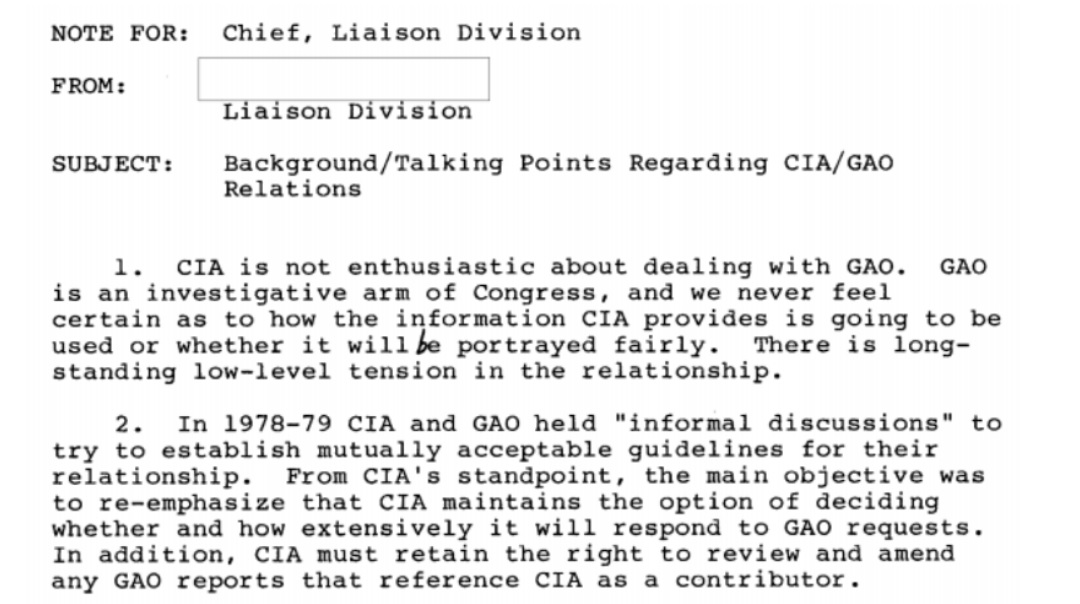 Among other issues raised by CIA was the GAO’s insistence on directly contacting the relevant components within the Agency. The GAO was expected to go through the Office of Legislative Liaison, then run by George and considered to be largely unresponsive to not only the GAO but the Congressional committees themselves.

The same memo brought up another issue which would soon be turned into a victory for the Agency in their war against GAO access. The final issue raised by the Agency was the GAO’s refusal to recognize “CIA’s right to withhold sensitive publications” like National Intelligence Estimates.

When GAO requested three NIEs in July of 1984, “the Agency took the position, which the oversight committees supported, that as an element of Congress, GAO had to work through the intelligence committees to obtain information from or about the Agency. The Agency would provide the NIEs to the committees, but it would be up to them whether they were shared with GAO.” The suggestion appealed to the two Congressional committees because it appeared to guarantee their access and centralize their control. In effect, however, it further marginalized the GAO and greatly reduced their access by creating a new bottleneck. By placing the control fully under the Congressional committees, it made the process much more subject to politicking than under the independent GAO. 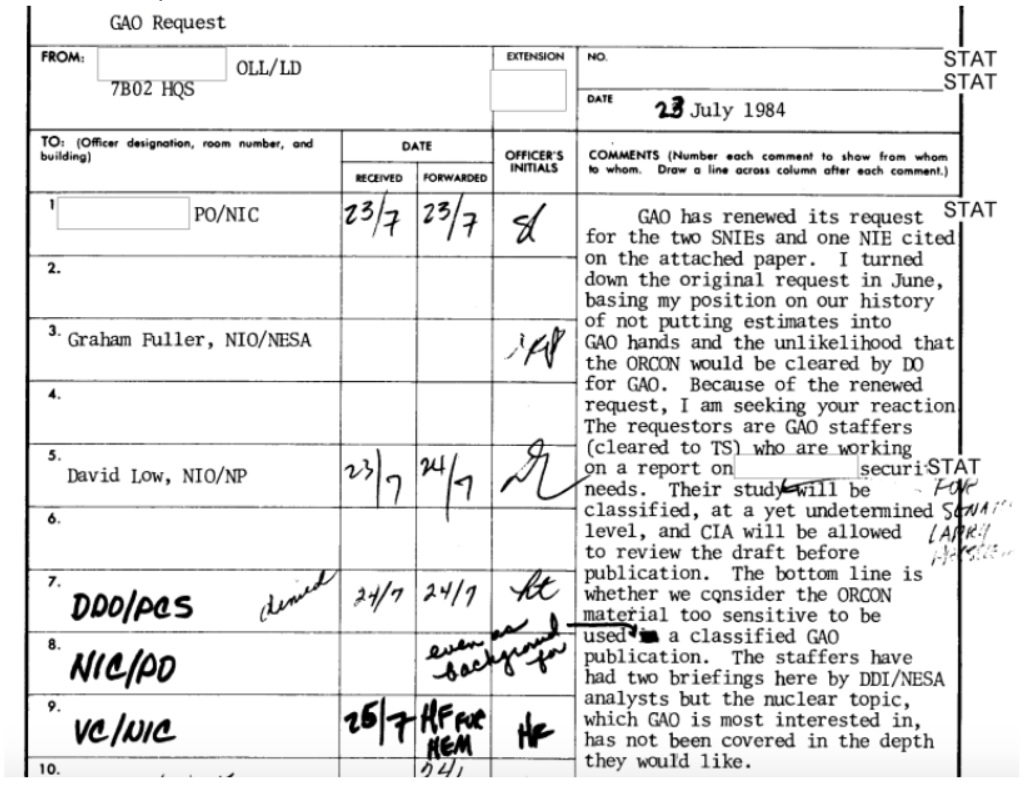 When, in 1988, an amendment was introduced that would require reporting of information to the GAO, both the CIA Director and the Attorney General wrote to the Speaker of the House to argue against it, saying it was “both unwise and impermissibly encroaches on the President’s constitutional authority.”