In response to the initial FOIA request for files on deceased WikiLeaks Director and Courage Foundation trustee Gavin MacFadyen, the FBI cited a litany of exemptions. These included an ongoing investigation, national security, and the need to protect the identity of a confidential informant. While the Bureau used these exemptions to withhold all of the materials on MacFadyen in their possession, they did reveal that at least four files mentioning MacFadyen had been transferred to the National Archives. 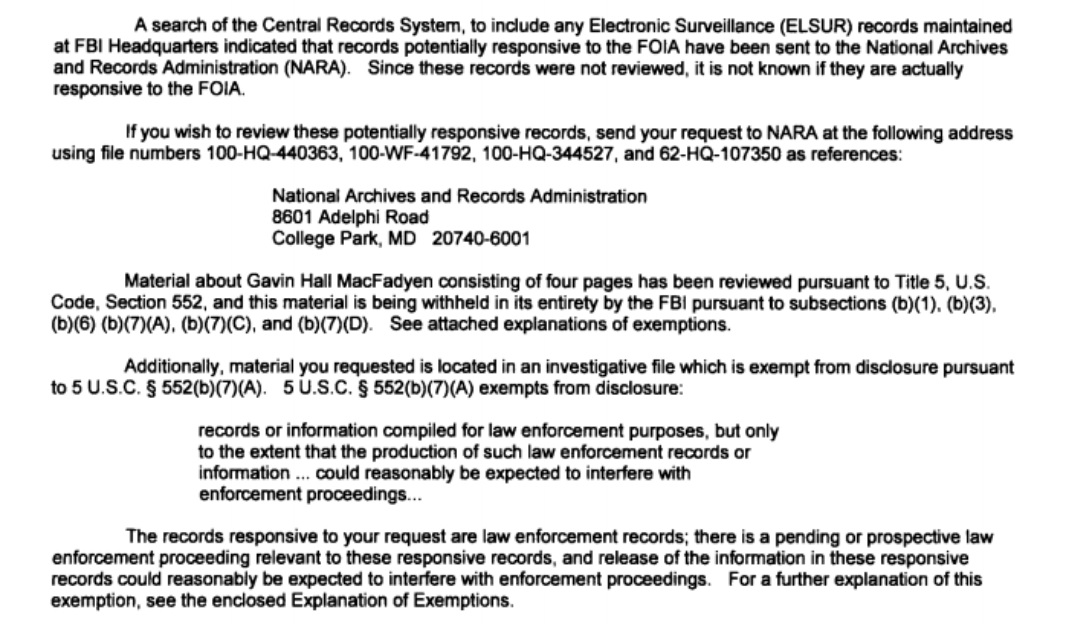 A request for these files proved more productive. NARA located all four files and was able to quickly review and release two. Before even looking at the files, however, the redactions and their associated exemptions confirm that confidential informants were reporting on Gavin MacFadyen over forty years before his association with WikiLeaks. 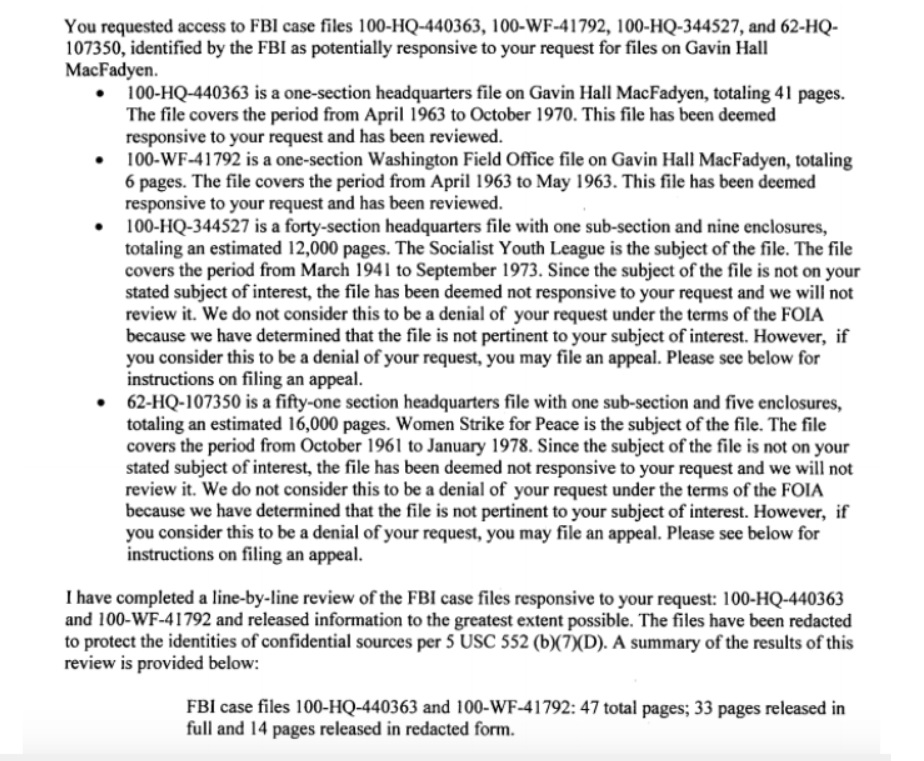 As early as 1963, the FBI had opened a 100-file on MacFadyen, the designation reserved for Domestic Security and Domestic Terrorism cases. MacFadyen was considered a potentially significant subject, and was flagged for the attention of no less than FBI Director J. Edgar Hoover. Labelled Security Matter X, a catch-all term that even included UFO cases straight out of the X-Files, the file begins by reporting information provided by an unknown confidential informant. This informant warned the Bureau that MacFadyen was a “close associate of a very active group of Trotskyists” and a member of the “extreme action group” known as the Committee of 100.

“Extreme action” is disingenuous at best, as is the later description of the Committee as being made up of “anti-nuclear militant-type individuals,” who were known for having used mass nonviolent resistance and civil disobedience to progress their aims, such as sit-ins. In UK, however, the Committee was taken most seriously - two years before the FBI memo, the committee’s members were summoned to court without charge under the Justices of the Peace Act of 1361, as a result of which 32 members of the Committee were jailed for refusing to promise ‘good behavior’ for the next year.

While MacFadyen was overseas, it didn’t keep the FBI from keeping an eye on him, including where he lived and who he spoke to. When he began copying and distributing a relatively large number of leaflets, the Bureau was informed by one of their faithful informants, and would even go so far as to collect - via the unknown confidential source identified only by the placeholder cryptonym T-1 - some of MacFadyen’s correspondence and his address book. 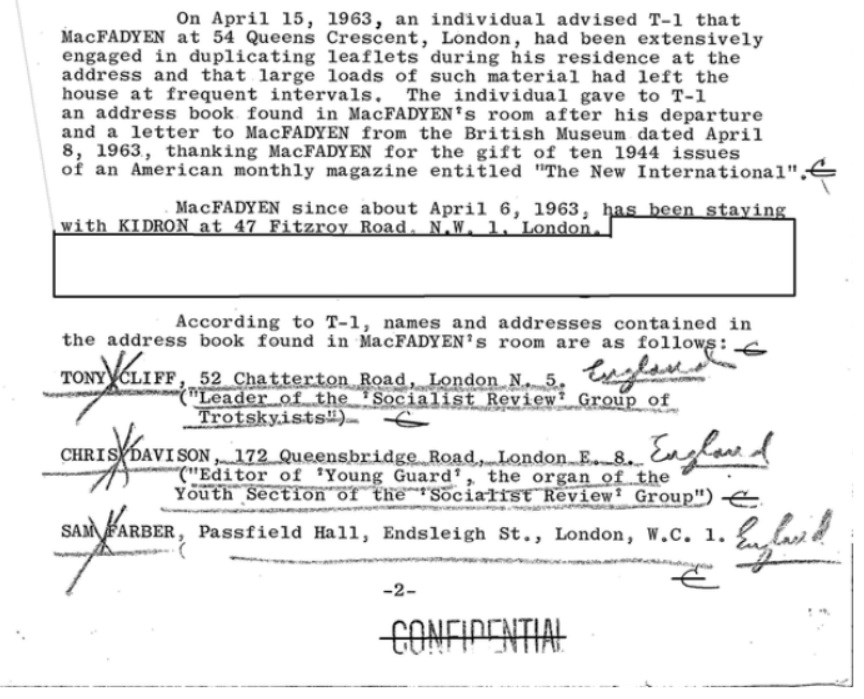 Due to the extensive redactions, the circumstances under which the informant took the address book remain unclear - the address had been used by both MacFadyen and another Committee member, John Strauther. MacFadyen had departed and for several weeks had no known address and may have been traveling to Calcutta. However, the address was not just an apartment for Strauther and MacFadyen - it was used as a small base of operations which they worked from. Regardless, despite having an informant covering MacFadyen and copies of his letters and address book, the FBI never mentions suspicion of any criminal activity - only peaceful activism. 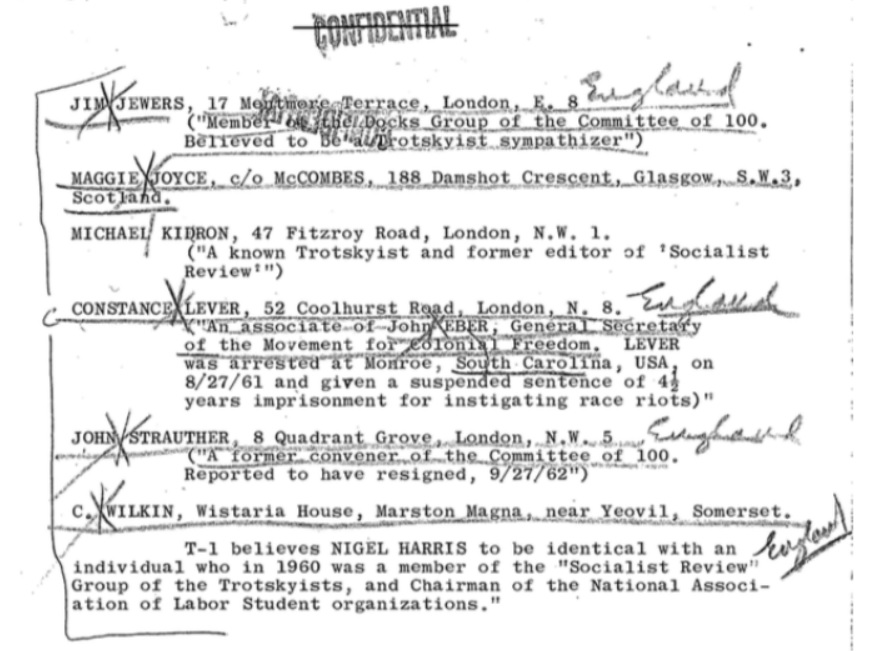 Asked to comment on the FBI file of his deceased friend and colleague, Julian Assange replied

“It’s creepy to see that the FBI had an informer sneaking into Gavin’s bedroom in London and stealing his address book when he was twenty-three. The FBI likes to present itself in TV shows as catching criminals, but the reality is, such images have been used to cover the FBI’s role as political police for decades. Gavin is not the only victim. The FBI even recorded secret sex tapes of Dr. Martin Luther King Jr. in their attempt to destroy him politically. Although the records of Gavin were compiled by adversarial political police his integrity and intelligence still shine, fifty-four years later.”

While the FBI’s investigation clearly went beyond the normal background checks in places, the Bureau’s investigation was at least partially instigated by MacFadyen applying to become a temporary substitute mail carrier in Chicago. As part of the Bureau’s background check, they made a special note of the fact that MacFadyen had undergone voluntary psychotherapy five years prior.

The file never explains why the Bureau thought this was relevant.

When speaking to the Dean at MacFadyen’s former college, the Dean informed them that MacFadyen’s admission was a mistake and he had been previously denied admission to the university. This was based solely on the Dean’s memory that someone from the University of Chicago Laboratory High School that there was the “possibility” that MacFadyen was associated with a “young Nazi group.” This accusation was never verified and seems contrary to MacFadyen’s political and philosophical beliefs.

The Dean, however, had other issues with MacFadyen’s politics. MacFadyen had told the Dean that he was neither left nor right wing, a concept that the Dean had a great of trouble with. The Dean also seemed to resent the idea that MacFadyen, who was a socialist, acted as thought he knew more about socialism than the college’s teachers.

As a result of the Dean’s refusal to believe that MacFadyen’s beliefs were what he said they were, the Dean saw him as a manipulator and someone who couldn’t be loyal to anyone - though MacFadyen’s CV would later prove the Dean wrong in this regard. 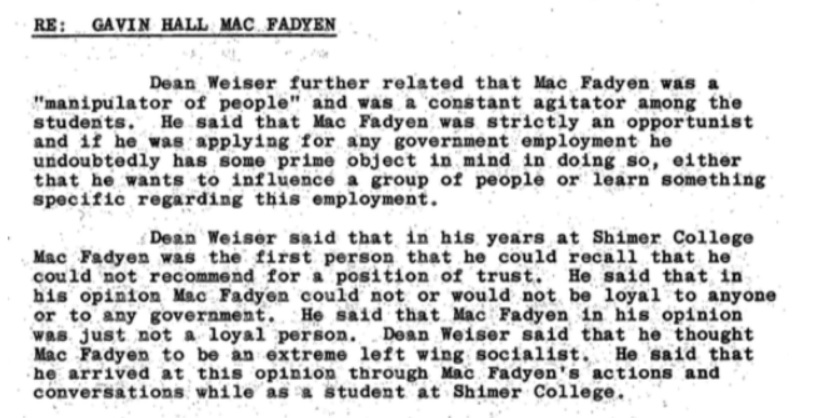 Despite the Bureau’s daily digging into MacFadyen’s life year after year, they were ultimately unable to find anything derogatory except for an anonymous and unverified accusation that he had “possibly” been associated with Nazis in high school, and the fact that he was openly a socialist and an anti-nuclear activist who had engaged in sit-ins and other forms of civil disobedience.

You can read the released portion of MacFadyen’s file below, or on the request page:

Image via The Center for Investigative Journalism