Years ago, I heard rumors about some of the FBI’s older files, which were curiously labeled SM-X or Security Matter X. Like the X-Files, these dealt with some strange topics. The two examples I was told about were UFOs and L. Ron Hubbard. This, of course, was too strange to not file a FOIA request for but the FBI denied being able to find the records. For obvious reasons, I wasn’t eager to begin a big fight over the existence of secret files on alien invasions based on a rumor, so I took a different route, requesting the FBI file for one of the people involved in a lot of strange stories, including the Maury Island Incident (cited as an example of one of the SM-X Files) - and it paid off.

The man’s name was Fred Lee Crisman, and he’s every bit as weird as a character from the X-Files. Throughout his life, Crisman appeared in at least half a dozen conspiracy theories and stories of high weirdness. One of his earliest strange stories apparently involved freeing himself from a cave in Burma during World War II, where he was held by “evil underground creatures.” From there, the stories around him just get stranger.

The story of Crisman and Security Matter X begins with the aforementioned Maury Island Incident, an alleged UFO sighting and crash that occurred about a month before the events at Roswell. According to various versions of the legend, Maury Island involved one or more UFOs that either dropped something or disintegrated, the fragments of which damaged Crisman’s boat, killed a dog, and (according to some versions) hurt someone. Subsequently, Crisman and Harold Dahl, the other apparent witness, were approached by “men in black” – one of the instances that helped popularize the legend.

The story then gained additional coverage when a government plane crashed, a plane which was said to be carrying fragments from the Maury Island Incident. The FBI file on Crisman indicates that the Bureau quickly determined the matter was a hoax, though the file is careful to note that Dahl “did not admit that his story was a hoax but only stated that if questioned by the authorities he was going to say it was a hoax because he did not want any further trouble over the matter.” 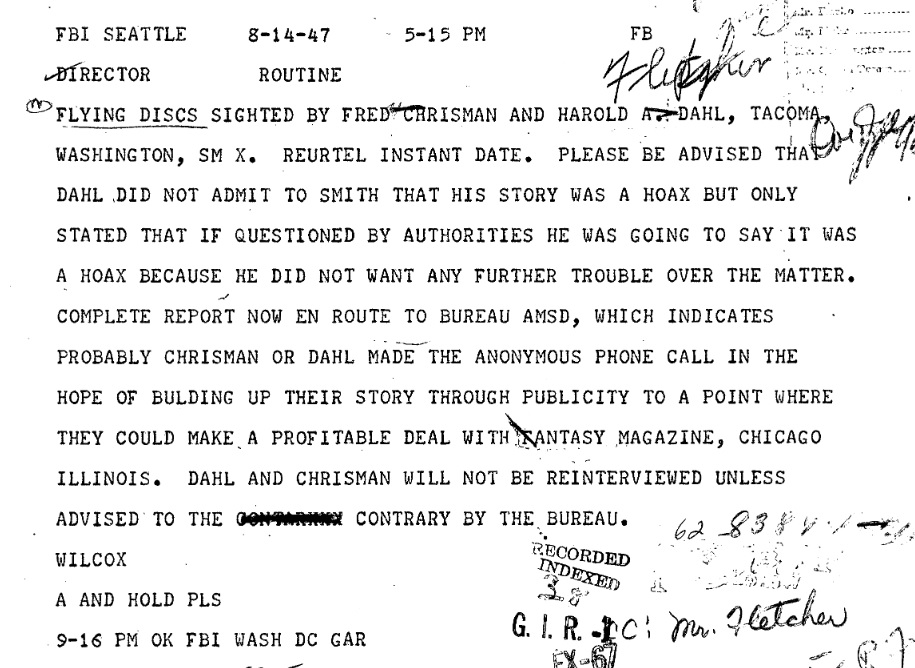 The Air Force denied responsibility for the sightings and asserted there were no credible reports of “flying discs” in the area. The FBI’s investigation agreed with this and concluded that the plane “was definitely not carrying parts of a disc.”

The memo cited above is labeled “copies destroyed” and although it was written the same day of the memo stating that Dahl did not admit the matter was a hoax, an attached memo states that both Dahl and Crisman admitted there were no discs. According to this memo, the materials found by Crisman and Dahl were simply “strange rock formations” they found in a gravel pit on Mauri Island [sic] and that Dahl wrote a false letter claiming the material came from a flying disc, and that they had then been paid to say as much. This version of events is also memorialized in a statement signed by Crisman and given to the FBI. 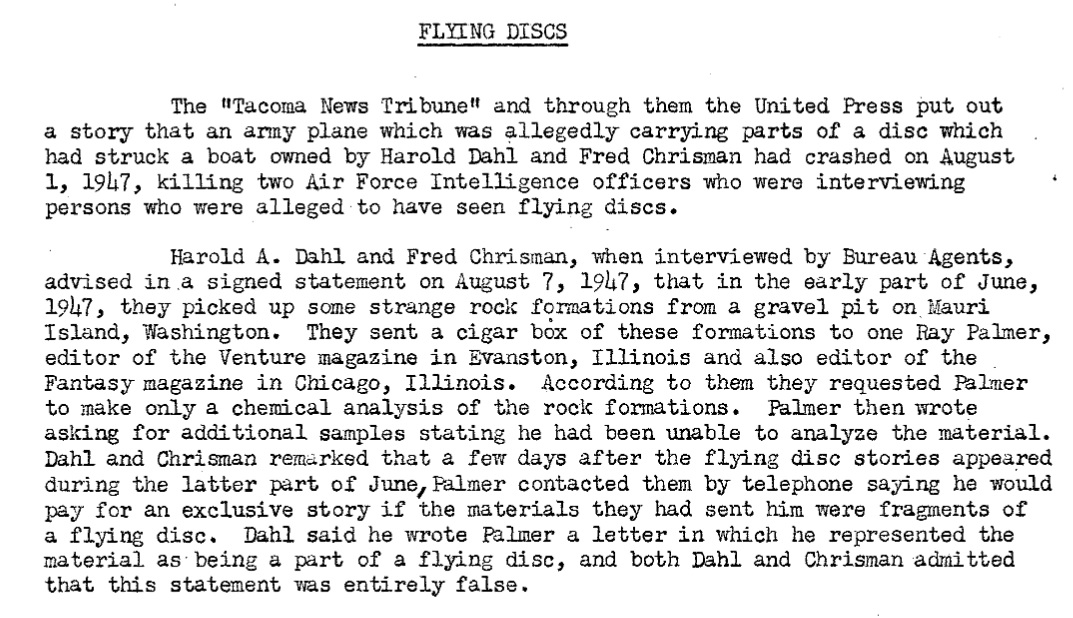 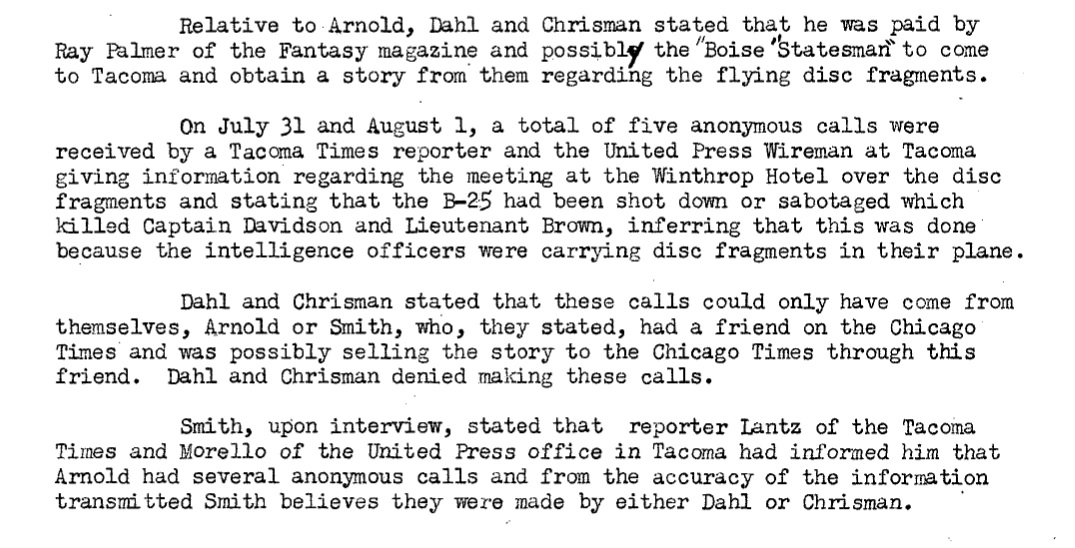 A few days later, another memo is issued for the Director of the FBI, J. Edgar Hoover, labeled “SM – X,” an abbreviation for “Security Matter – X,” complicates the story slightly. According to this memo, the people aboard the crashed plane had met with Dahl and Crisman to discuss the “flying discs” story and had taken a sample of the rocks.

The FBI continued to collect a number of versions of the story from various individuals, and eventually concluded that the strange rocks/disc fragments bore a distinct resemblance to slag from a smelter.

Although many have concluded that the Bureau was correct and the matter was a hoax, the story gets just a little bit stranger.

In the late 1960s, Fred Crisman was fingered as being one of the people responsible for the Kennedy Assassination. While that’s not entirely unique (hundreds of people have been accused, with varying degrees of alleged complicity), he was one of the more investigated individuals. He was even called to testify for the grand jury and trial of Clay Shaw, the only criminal prosecution and trial to attempt to address the JFK Assassination. Some believed that Crisman was one of the “Three Tramps” that had been arrested in Dealey Plaza on the day of he Kennedy Assassination. This was later investigated by the HSCA, which concluded that of all the people accused of being one of the “Three Tramps,” only Crisman bore any real resemblance – but he wasn’t in Dallas that day.

This would be a mostly forgettable piece of trivia if not for one final piece of twist of high weirdness – Crisman was already connected to one of the suspects in the Clay Shaw trial through the Maury Island Incident and Security Matter X.

At the time, the FBI’s Special Agent in Charge (SAC) for Butte, Montana was one Guy Banister. He was dead by the time of the Clay Shaw trial, but that didn’t stop suspicion from falling on him. According to Jim Garrison’s files on Crisman, both he and Banister were connected to Sergio Aracha Smith, a leader of a CIA backed anti-Castro group that Banister apparently helped supply with arms. These twists of high weirdness surrounding the JFK Assassination are so high and so weird, that H.P. Albarelli to dedicated a book to it.

Now that there is no doubt that the Security Matter X Files are real, more requests will be filed with the Bureau to dig them out, including the materials on L. Ron Hubbard and anything else even somewhat related to Scientology. In the meantime, you can read the FBI file on Fred Crisman embedded below, or on the request page.