Oliver White Hill is among the country’s most important civil rights attorneys of the 20th century, known for pursuing cases to dismantle segregation in Virginia before and after serving in the army during World War II. Working on behalf of the Virginia National Association for the Advancement of Colored People, Hill’s Davis v. County School Board of Prince Edward County was consolidated into the era-defining Brown v. Board of Education Supreme Court case.

Hill, who died in 2007, was widely recognized during his lifetime. Among his many accolades, he earned the National Bar Association’s “Lawyer of the Year” award in 1959, and forty years later President Bill Clinton bestowed the Presidential Medal of Freedom.

That recognition came after a lifetime of death threats, including a cross burned on the lawn of his Richmond, Virginia home. While Hill’s own writing has illuminated how he persevered through Jim Crow-era Virginia to push back on segregation legally and politically, the Federal Bureau of Investigation’s file on Hill, however, offers its own remarkably skewed, racist, and paranoid view of Hill’s work, in keeping with Director J. Edgar Hoover’s deeply held suspicion of the Civil Rights movement.

The 134-page file primarily dates from a background investigation ordered in 1960, probably relating to his nomination by incoming-President John F. Kennedy for a role in the Federal Housing Administration.

The assembled documents seek to answer two primary questions: was Hill a communist, and just how threatening to the status quo was his NAACP activity?

The first priority appears to have been tracking down any truth behind accusations that Hill had left his legal practice in Roanoke under a “cloud” of stolen money. Then-governor of Virginia, J. Lindsay Almond, eventually tied the threads together - people had confused Hill with another black lawyer in Roanoke:

Almond also used the type of language that crops up throughout the interviews of white officials - Hill was “well-mannered.”

One Virginia official, name redacted, offered the FBI a rundown of the Virginia General Assembly’s attempt to stifle the NAACP and Hill from filing lawsuits against school segregation: 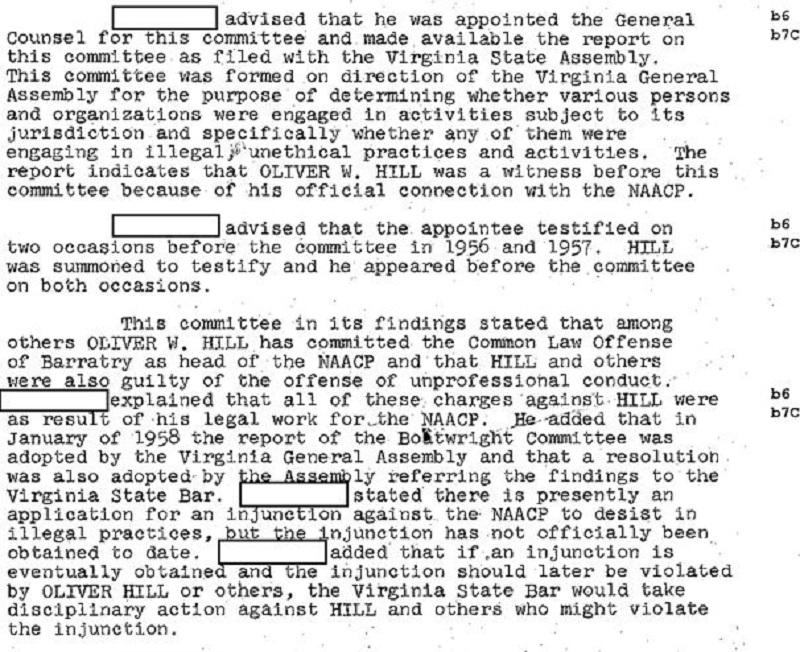 The Bureau dug deeper. Before the background check had been ordered, the Richmond FBI office received this tip: 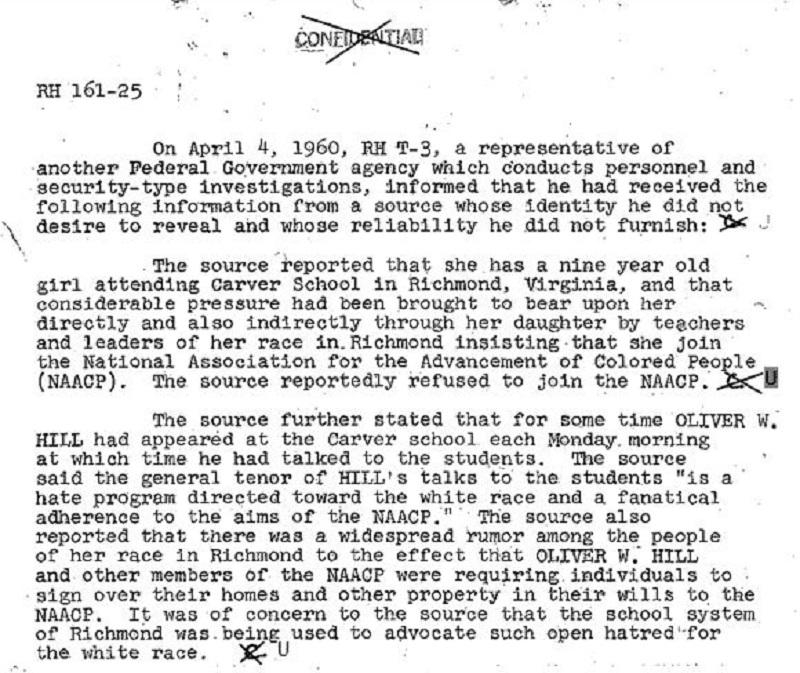 Another source debunked this:

The FBI also relied on informants within the Communist Party of Virginia to determine how deep Hill’s ties to the party ran, including documents “found” in someone’s home: 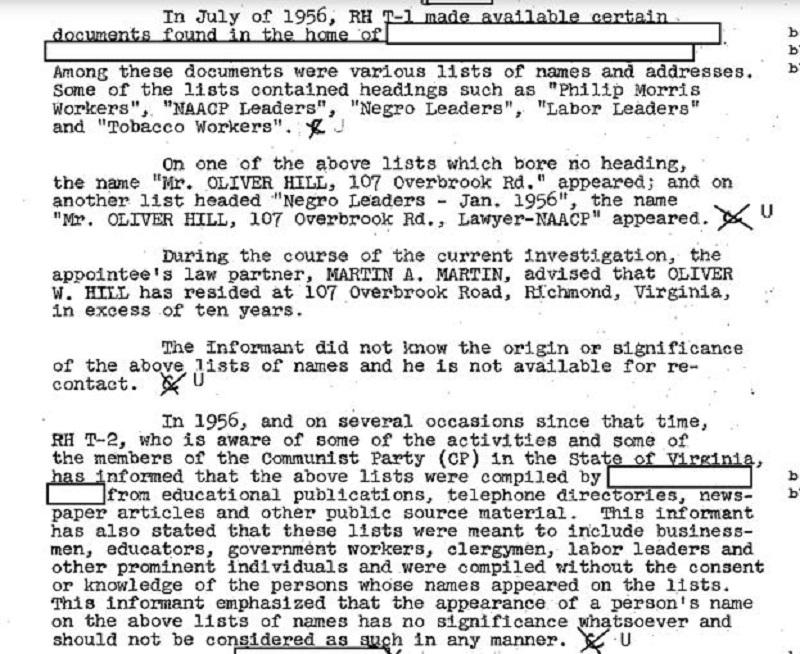 There are a few other reports from informants, all corroborating that Hill had no ties to the party: 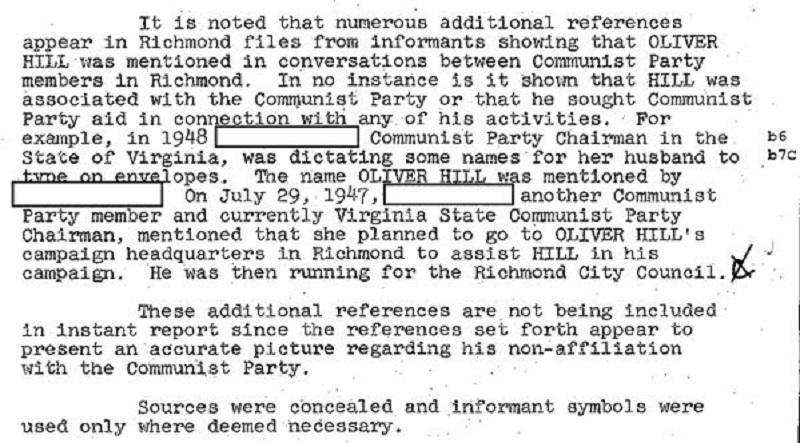 The Pentagon even weighed in: 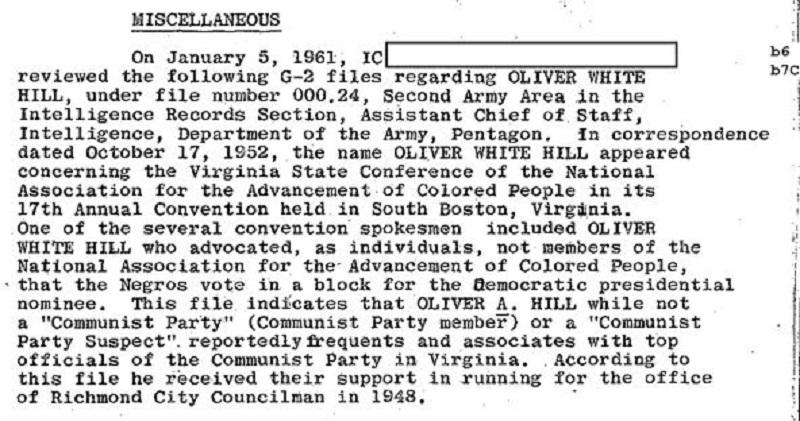 While much of this is standard Red Scare-era FBI background check procedure, the interviews with Virginia officials offer a glimpse at the casual racism Hill faced in his hometown. Hill was characterized as capable, even a “great crusader for his race” but also lacked “tact.” 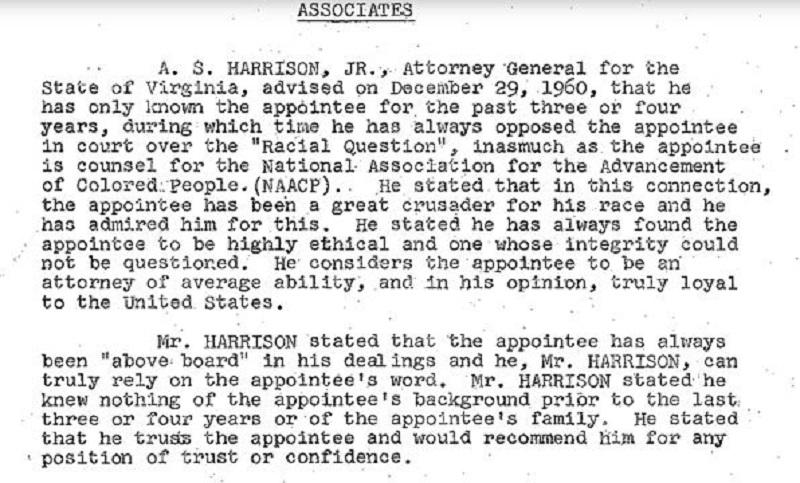 U.S. Congressman J. Vaughan Gary (D-VA) said Hill “would function well in a position of trust in the North or East, but would not have the necessary cooperation in the South to do a creditable job.” He added that as a city councilman, Hill handled the office “without prejudice.” While he felt Hill was “sincere” in helping end segregation, Gary said, “the people in this area feel that he has not handled the situation with tact and diplomacy.” 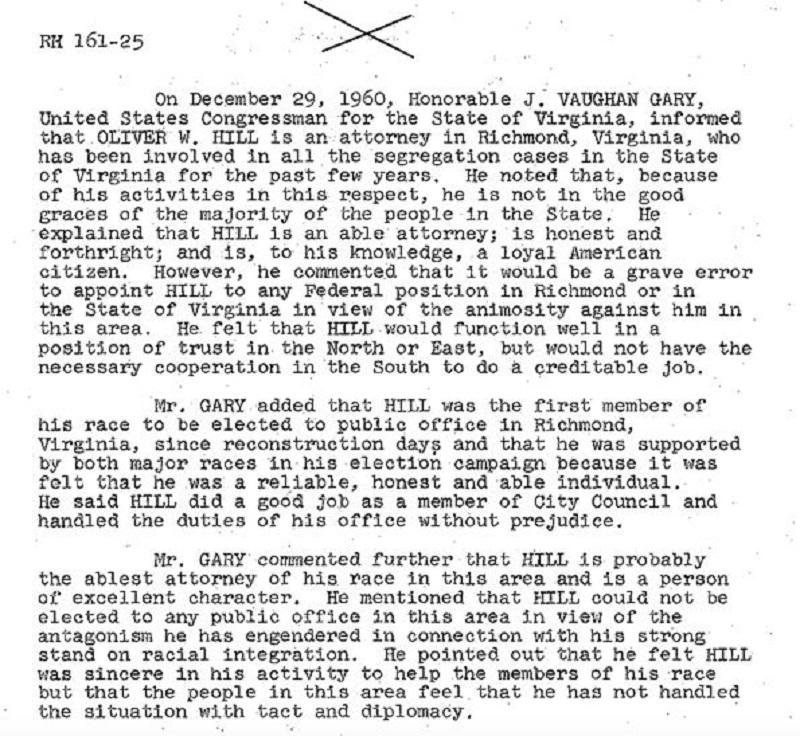 One unknown attorney, presumably white, did note a close relationship despite being “miles apart” on politics: 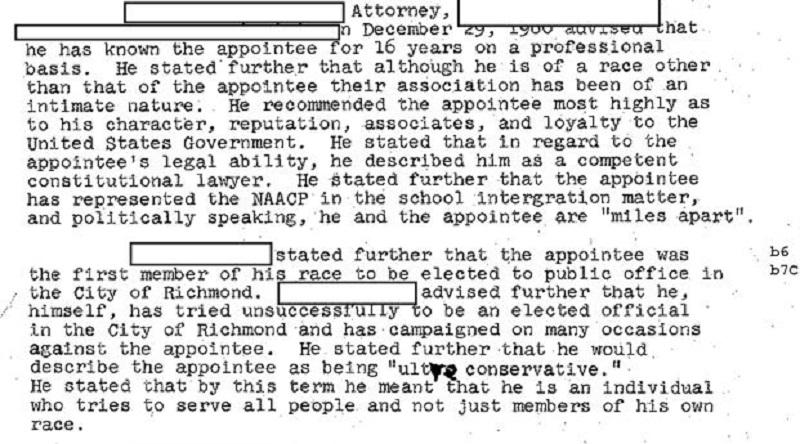 While the bulk of the file’s interviews involve officials or attorneys, the Bureau did track down Hill’s landlord from his Howard University days in the ‘30s. Thirty years later, she remembered that he was “headstrong” and that he dropped a refrigerator down a flight of stairs while moving in: 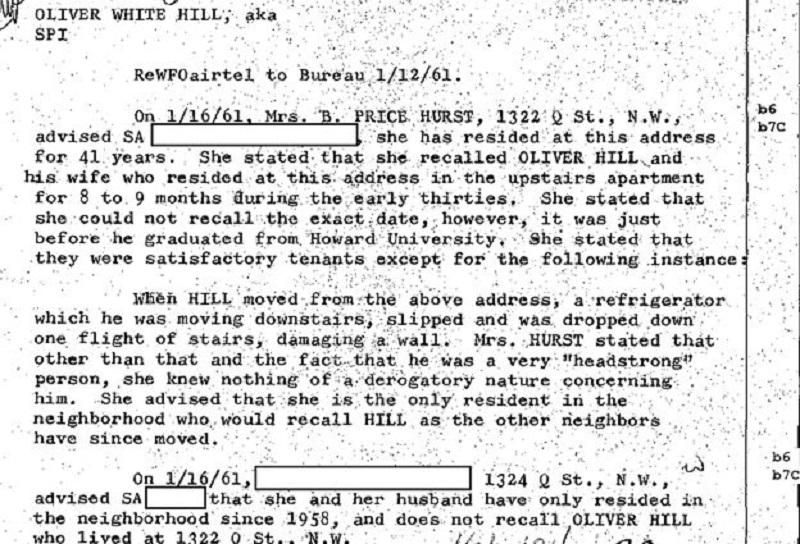 Read the file embedded below, or on the request page. See something else interesting? Let us know!

Image via The Library of Virginia