FBI documents released to MuckRock reveal that Irving Adler, a serviceman and federal employee, was investigated twice in Red Scare loyalty checks. In both cases, Adler faced higher scrutiny due to his shared name with the New York City teacher memorialized in the case Adler v. Board of Education. Adler the teacher was fired after refusing to answer questions before the Senate about his alleged ties to the Communist Party. He sued along with several teachers to overturn the infamous Feinberg Law, but lost before the Supreme Court in 1952. SCOTUS later overturned its Adler ruling in 1967, and found the Feinberg Law unconstitutional.

The two Adlers apparently did not know each other, though they were both born in New York City during the spring of 1913. But their shared name and Adler the teacher’s notoriety bled over into routine loyalty checks of Adler the serviceman. After Adler the teacher died in September 2012, MuckRock requested his FBI file. Instead, the Bureau sent files detailing the investigations of the other Irving.

According to the documents, officials interviewed Adler the serviceman in 1942 when he was on the War Production Board. Records from the Civil Service Commission on file with the FBI include a 1942 interview, in which Adler admitted to having sympathized with the loyalists in the Spanish Civil War. He also confessed to making some small contributions and subscribing to the magazines “Friday” and “New Masses,” the latter being a communist publication.

Pressed further, Adler said he “was a little mixed up at the time.” He was 23 and 24 years old when he took an interest in the war.

Other questions from his loyalty interviews are apparent references to the other Irving Adler. “Have you ever registered as a voter under the Communist Party?” the investigators asked. “Were you secretary to the New York Teachers Anti-War Committee?”

Less than a decade later, when he was appointed to a federal post as an administrative assistant in the U.S. Air Force, Adler the serviceman was again vetted for disloyal ties. The process was pushed to the FBI for a full investigation because of Adler’s 1942 magazine admissions — enough to heighten suspicion amid the panic leading up to the Red Scare.

The investigation was thorough. The FBI interviewed Adler’s associates in San Antonio, St. Louis, Washington D.C., New York, and New Jersey. They were coworkers and acquaintances, and they had no reason to doubt that Irving Adler was a “loyal and patriotic American citizen.” In total, Bureau investigators interviewed more than a dozen acquaintances of Adler’s. 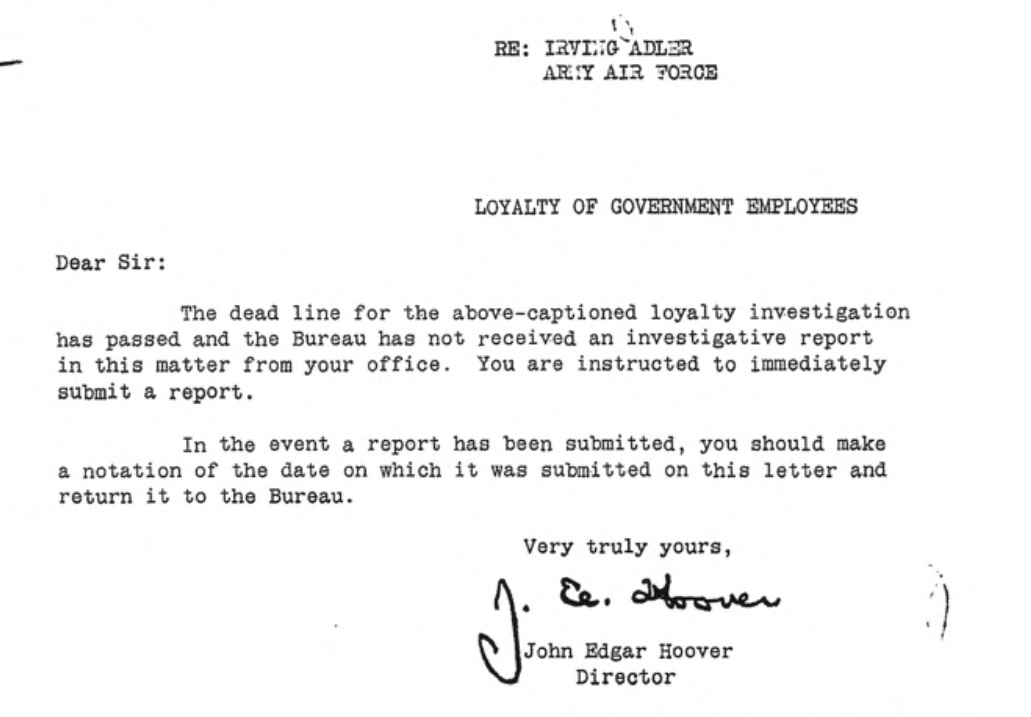 Still, there were obvious concerns about the other Irving Adler, the teacher from Long Island City who was “a known Communist.” Federal investigators ultimately determined that Adler the federal employee had never lived in Long Island City and had served in the military from 1943 to 1946. They finally came to the conclusions that the two were not the same man.

After weeks of delays and a lengthy investigation, the FBI found that prosecution against Adler the serviceman “was not warranted at this time.”

The FBI did not send any documents related to Irving Adler the teacher and “known Communist.” After requesting additional documents on any investigations the Bureau conducted surrounding Adler the teacher, who went on to become a renowned activist and author, the FBI produced a single page.

… which mostly concerned the mixup between the two Irvings.

Read the investigatory file embedded below, or on the request page.