Recently released Federal Communications Commission complaints about the police procedural Lucifer show that the series not only drew ire for the usual reasons (sex and violence), but for something far, far more sinister: being a plot by the literal devil to corrupt humanity, summon the Four Horsemen, and bring about the apocalypse.

The accompanying cover letter notes that the “information … has not been verified by the FCC.” So therefore it’s entirely possible that the people making these complaints might be a bit misinformed about the show or know what it’s about, but also established theological scholarship on the subject of eschatology. That’s the official position of the FCC, anyway.

The first of three complaints (of a trinity, if you will) from Huntington, New York was submitted on January 28th, 2016, three days after the pilot aired. 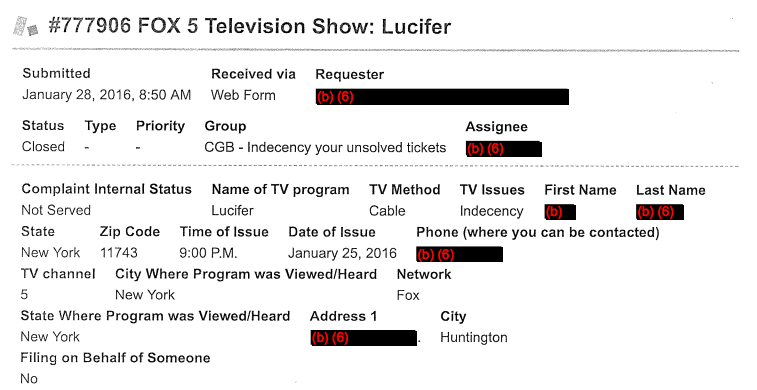 The complaint explains that the show “portrays Lucifer in Holy aspect” and has “people committing murder and evil acts in his name.” The latter is utterly untrue, and the former is only true to the extent that the show acknowledges the Biblical canon that Lucifer is a divine, though not holy, entity. The complaint alleges that the show will result in the mentally ill becoming violent. This understanding of mental illness and violence is, of course, as inaccurate as their description of the show.

The complaint then explains that people are basically guided by the whispers of a devil on one shoulder and an angel on the other.

Two days later, someone else in Huntington filed a complaint about the show. Their name and address are, perhaps coincidentally, the same length as in the first complaint from Huntington. 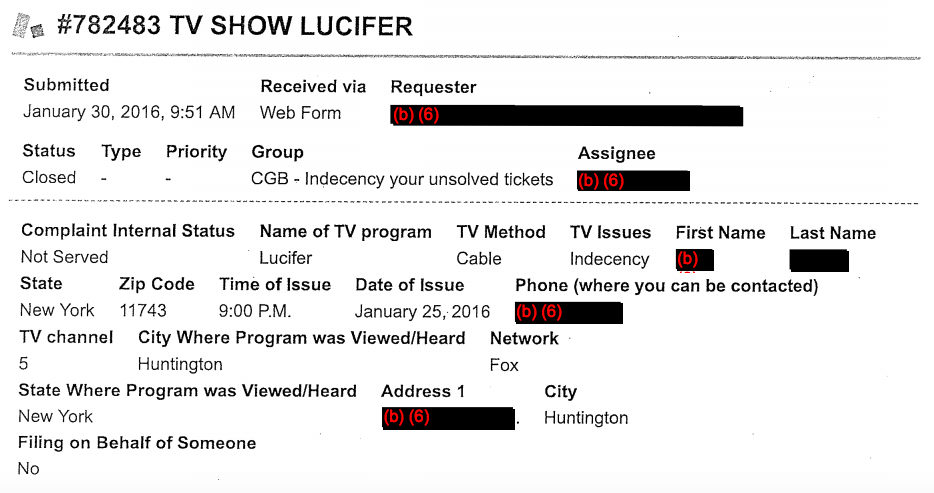 Even more coincidentally, the complaint also discusses the devil being “wrath” that lives in people’s hearts, swaying them to evil. While misusing the term daemon, the complaint explains that the devil “has many names” and that the show was going to “take away the miracle of Jesus/G-d” in the “highest form” of blasphemy.

Again, the FCC has not verified the information in this complaint, including the ease with which G-d can apparently be defeated by a show that only just narrowly avoided cancellation, but it’s big, if true.

The complaint closed with the even bigger if true claim that “Armageddon” was unfolding more rapidly, and that the Four Horsemen are upon us.

Neither the FCC nor and independent investigation by MuckRock has verified the apocalypse.

A third complaint from someone in Huntington, again with a name and address the same length as in the original Huntington complaint, was sent to the FCC on February 4th, 2016. The complaint, like the two before it, ends with a plea to “cancel the show!” This complaint once again makes false claims about the show itself, such as that it shows “violence and sex … as being done for good in the name of Lucifer.” The Catholic complainant goes on to reveal their (false) belief that Muslims equate Muhammad with Allah. The complaint then, surprisingly, ends in what can only be a scathing critique of the Vatican and Pope Urban II, referring to him as a “false prophet” for professing violence.

Another complaint, submitted before the show had ever aired, makes a somewhat more muted complaint about it, that “it depicts Satan interacting with humans during activities considered indecent by the community.”

As even the earliest trailers made clear, what the show depicts is Lucifer interacting with and helping the police.

You can read the rest of the complaints on the request page or below.