Complaints against Buffalo police officers and firefighters — regardless of whether they are unsubstantiated, pending, or involved in a confidential settlement — will remain subject to public disclosure as allowed by state law, a New York judge ruled Tuesday, as reported by Aaron Besecker for the Buffalo News.

In June, the New York legislature passed and Gov. Andrew Cuomo signed into law a repeal of New York Civil Rights Law Section 50-a, the portion of state statute that permitted withholding information on misconduct allegations and investigations against police officers, correctional officers, firefighters. Prior to the repeal, police unions in the state had voiced strong opposition to the changes, and following the June 12 enactment, multiple unions took to the courts to block the release of records, including in New York City and Schenectady.

Tuesday’s decision by Judge Frank Sedita III in the case of Buffalo Police Benevolent Association against the City of Buffalo brings to an end the effects of a restraining order against the release of police officer, firefighter, and correctional officer disciplinary records he enacted as part of the lawsuit in June.

Immediately following the repeal of Section 50-a, MuckRock began to file New York Freedom of Information Law (FOIL) requests with every police department in the state. The request sought officer complaints and disciplinary records since the 1970s, when the Section 50-a was first put into place. While some agencies responded quickly to the request, multiple have delayed providing responses by citing the pending litigation.

Some agencies rejected or declined to respond to MuckRock requests pending temporary holds placed by judges in these cases. The Woodstock Police Department, responding to MuckRock’s request, simply sent a copy of a newspaper article about the temporary hold placed by the Southern District of New York. 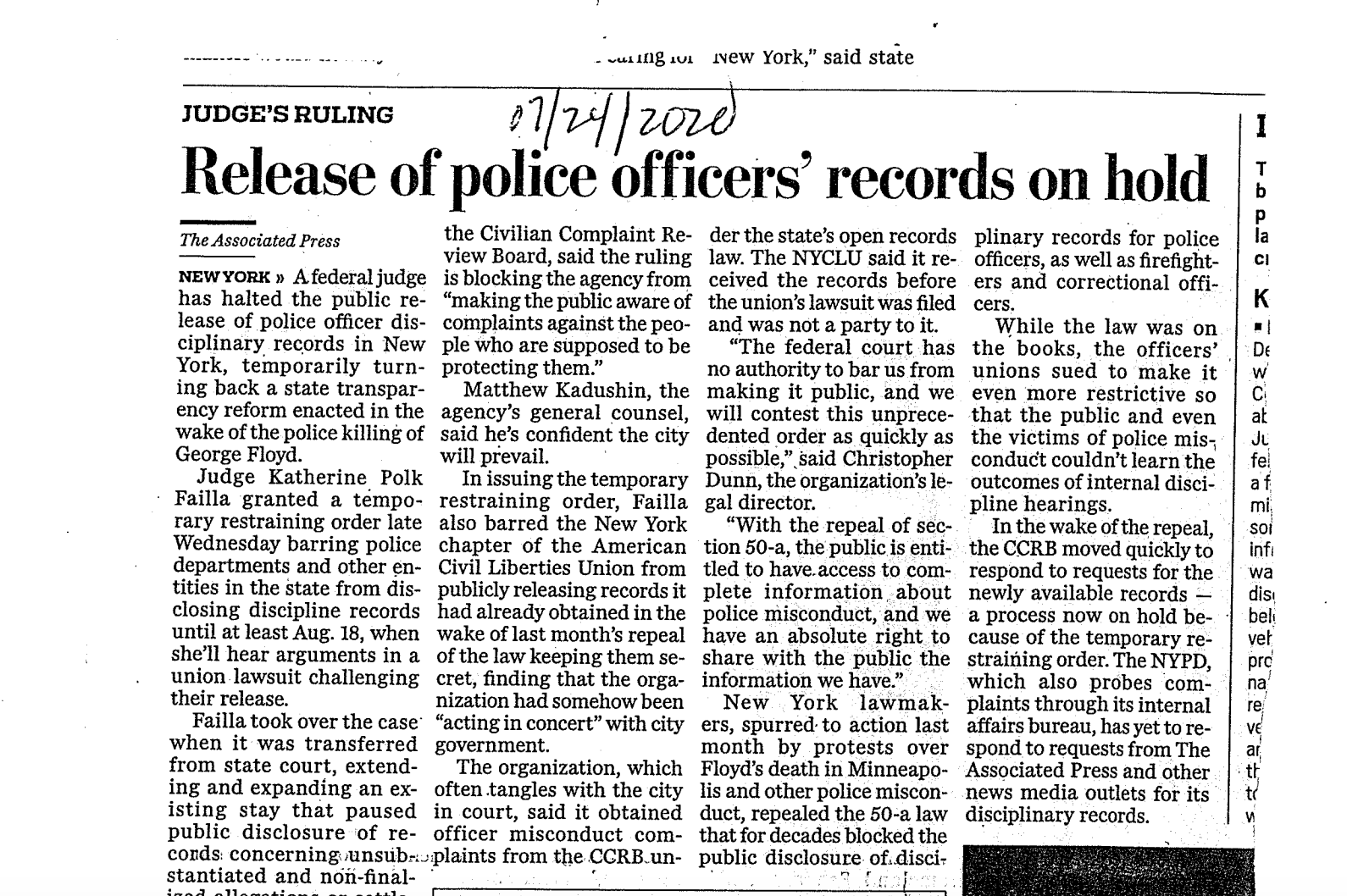 One of the most common objections to the release of police complaints involve concerns that the reputations of officers would be harmed if the public knew of alleged incidents or those that didn’t end with any disciplinary action. Southhold Town Police Department was among those that denied MuckRock’s initial request, claiming reasons that included the “unwarranted invasion of personal privacy” that a release would cause.

Other agencies have claimed that the search for all complaints or disciplinary reports would be too much of a struggle to reasonably complete. MuckRock’s initial request to Buffalo Police Department was denied under claims that the request was too voluminous. A resubmitted version of the request, sent to the agency Tuesday, has not yet been acknowledged. In contrast, rather than denying the requests outright, many departments have asked for extensions of multiple months to fulfill the request, citing the time it will take to search for records during a period of pandemic-related limitations on staffing.

Of the 400+ initial requests sent, 85 remain unacknowledged, despite multiple follow-up messages and phone calls. A new round of follow-ups are going out this week.

All requests submitted to police departments as part of this project have been made publicly available to allow community members the ability to better follow, track, and understand the process their local police departments are taking to be transparent about past officer misconduct and discipline.

Header image by Jason Lawrence and licensed under CC BY 2.0