In the late ‘50s, a former Army Intelligence chief alleged that a secret cabal of socialists and Communists were infiltrating the government. As part of these allegations, the Federal Bureau of Investigation received 122 names, 119 of whom had a total of over 5,500 references in FBI files. Of these, there was derogatory information on 105 individuals, including some senior officials and even hardline anti-communists such as Central Intelligence Agency spymaster James Angleton.

The Bureau dismissed the accusations as the result of an interagency feud, and performed minimal research into them. However, the FBI did congratulate itself on having already been aware of most of the individuals and their alleged subversive tendencies, which included their sometimes having thoughts similar to those of socialists.

The Bureau believed that the allegations resulted from, or at least related to, what it described as a “feud” between CIA and G-2 (Army Intelligence). This feud including General Arthur Trudeau, who made the accusations, being relieved of his command and transfer as a result of charges made by CIA Director Allen Dulles. FBI redacted the charges as classified.

The same file, however, describes a September 1955 article from the New York Daily News by John O’Donnell.

The article reportedly said that Trudeau had been “fired” by President Dwight Eisenhower at Dulles’ request. Dulles allegedly “complained that Trudeau had talked with Chancellor [Konrad] Adenauer, without notifying CIA, in order to lessen Adenauer’s confidence in [Gehlen’s] “CIA-bankrolled setup” in Germany.”

While the FBI file doesn’t directly confirm this, it does memorialize the Trudeau’s contact with the Bureau on August 8th, 1955. In this contact, he reported that he hadn’t discussed anything with Adenauer that was “of an intelligence not already known.” He was, however, “at odds with CIA.” Trudeau also alleged that “CIA was attempting to gain complete control of the foreign intelligence field.” If this happened, Trudeau felt that “military intelligence … might as well go out of business.”

One week earlier, CIA Counterintelligence Chief James Angleton informed the Bureau that CIA had classified evidence of something involving Trudeau.

Trudeau’s charges alleged “that certain individuals in and out of Government were influencing the United States to take a soft policy against Soviet Russia and world communism.” The General provided a number of names, some with alleged “Fabian socialist leanings and possible some with communist leanings.” These individuals had allegedly penetrated policy making government organizations, including in the State Department and CIA, as well as a number of academic institutions that did research for the Government. 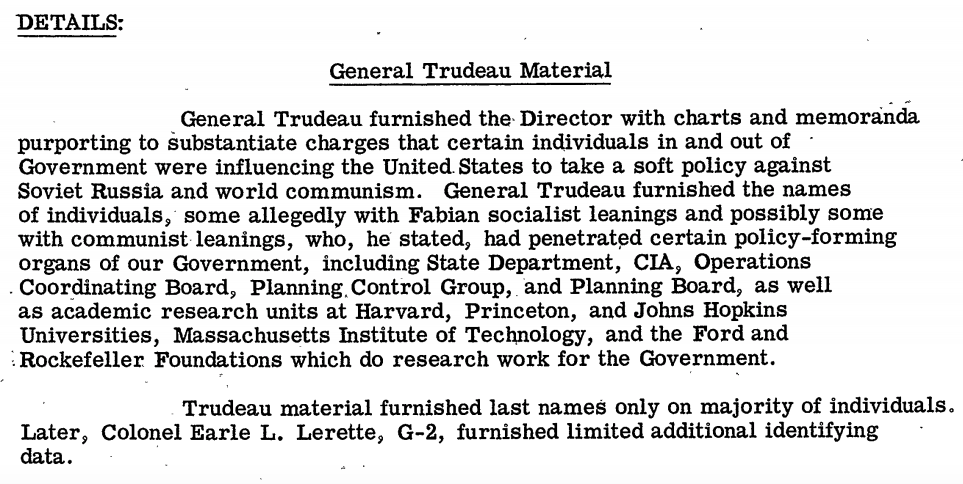 These “Fabian socialists” used tactics of patient concession, compromise and avoid of conflict while permeating society with socialist ideas to create “a slow, steady, peaceful transformation of the social order from capitalism to socialism.” The name was taken from the Roman general Quintus Fabius Maximus Verrucosus famous for weaponizing patience against Hannibal.

The FBI saw “no urgency” in the Trudeau’s claims, which were essentially investigated in the Bureau’s spare time. In the end, the FBI concluded they’d already looked at most of the individuals.

Beyond a review of their existing files, the Bureau declined to investigate any further. Hoover had instructed his agents to stay out of the feud between the CIA and G-2, having “correctly assumed that inquiry would have aroused curiosity and questions in high policy-making Government circles.”

Based on its review of existing files, the FBI found no conclusive evidence that the individuals were secretly socialists or were influencing policy along socialist lines.

They did, however, find a great deal of “smoke” resulting in allegations made by associates of the accused. This included thinking, on occasion, in ways that coincided with how a socialist might think or calling people “agrarian reformers” when “they were actually communists.” 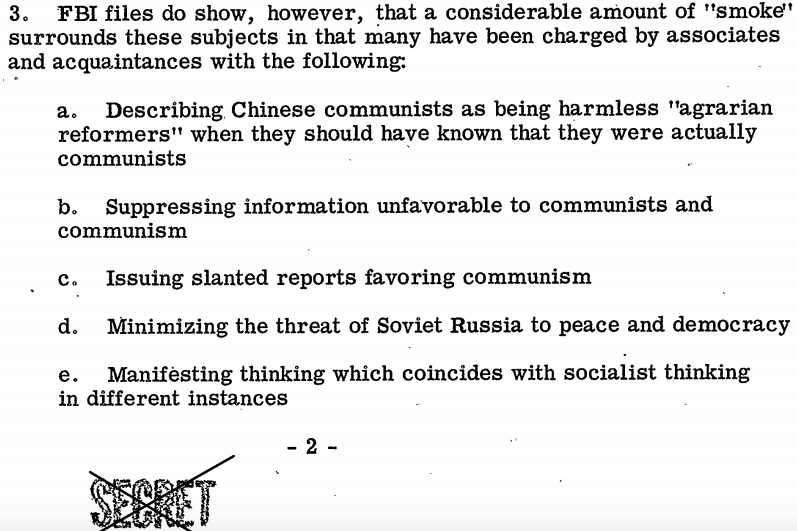 The FBI did, however, collect the derogatory information it had on these individuals, including previous allegations made by informants.

One person evidently named by Trudeau was one of his accusers - Angleton.

The file noted that the Bureau did indeed have derogatory information on Angleton. Some of this information remained classified in 2009, more than 50 years later and more than 20 years after Angleton’s death. The declassified portion of the derogatory information related to Angleton’s relationship with an respect for Ezra Pound, who Angleton said favored a government with a “cooperative state and community ownership.” The FBI reported that Angleton said Pound believed they should return to a society “with a strong church state,” but that Pound was “irrational” in some of his theories “due to strong anti-Semitic feelings” and hatred for “the international banking class.”

The Bureau’s favorable information consisted of Angleton being willing to testify against Pound for treason, and having provided the FBI with “voluminous information of interest.”

Based on this release, it seems that little came of Trudeau’s claims. Nevertheless, these Cold War feuds shaped the growth and missteps of the government and intelligence community. To learn more about this particular feud, MuckRock has filed several FOIAs. In the meantime, you can read the relevant portion of the file below, or the rest on the request page.