Accuracy In Media isn’t an organization that MuckRock is particularly fond of, but its Federal Bureau of Investigation file is full of some of our favorite things: debates over what an FBI file actually says and complaints about FOIA denials.

The file discusses two incidents: a disagreement expressed in a complaint to the Federal Communication Commission about about whether or not the FBI was actually responsible for the publication of information as part of a COINTELPRO harassment campaign, and a postcard campaign from supporters complaining about a post-9/11 FOIA rejection. The latter resulted in over 300 “postcards” being sent to the FBI, all of originated from a printout on AIM’s website. The Office of Public and Congressional Affairs Correspondence Unit quickly proposed not responding to the campaign, a proposal that it seems they decided on. 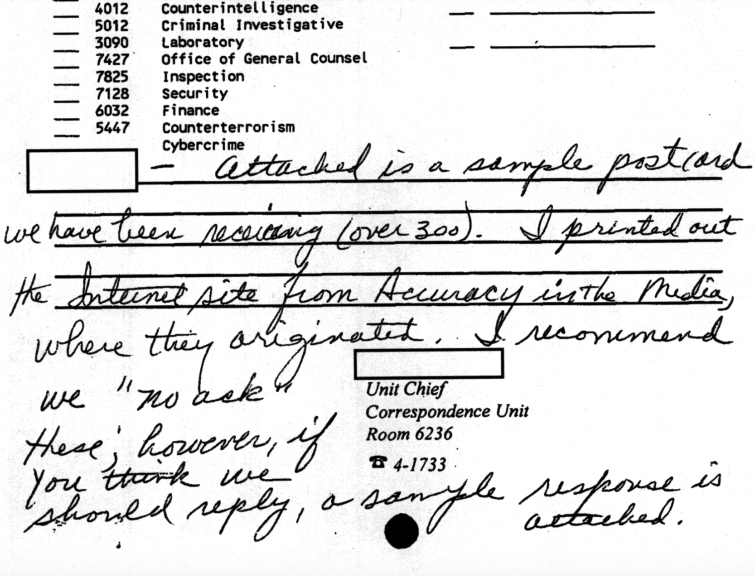 The postcard itself referred to a statement made by President George W. Bush that the passengers on Flight 93 had prevented the plane from reaching its target by forcing it into the ground. The postcard stated that the “only source for evidence” was the cockpit voice recorder. The postcard then expressed confusion about why FOIA requests for the tape and transcript had been denied. The postcard concluded by suggesting that indeed if no such tape or transcript existed, then the Bureau should let Bush know to prevent him from accidentally promoting a cover-up of 9/11. 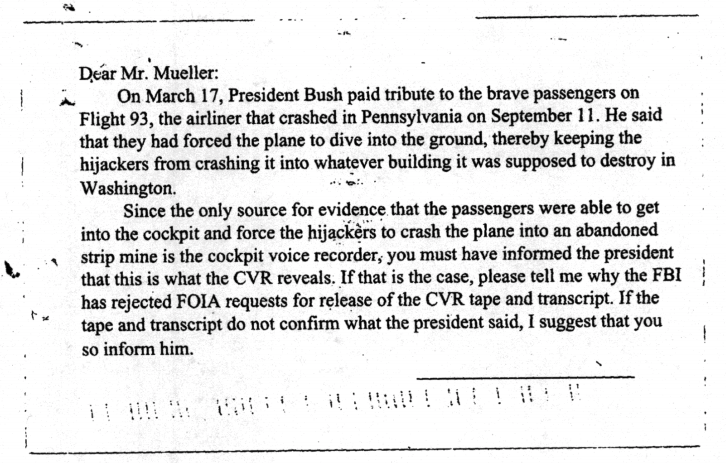 According to some marginalia, the records had been destroyed in accordance with NARA’s guidance.

The rest of the file is devoted to a lengthy FCC complaint filed by AIM, disputing reports about the FBI’s activities and the meaning of documents released through FOIA. According to a number of media reports, the FBI had admitted to planting a rumor about Jean Seberg’s pregnancy to hurt the Black Panthers, ultimately resulting in a miscarriage and a pair of suicides. AIM was specifically complaining about CBS’ November 1981 reporting on the issue. 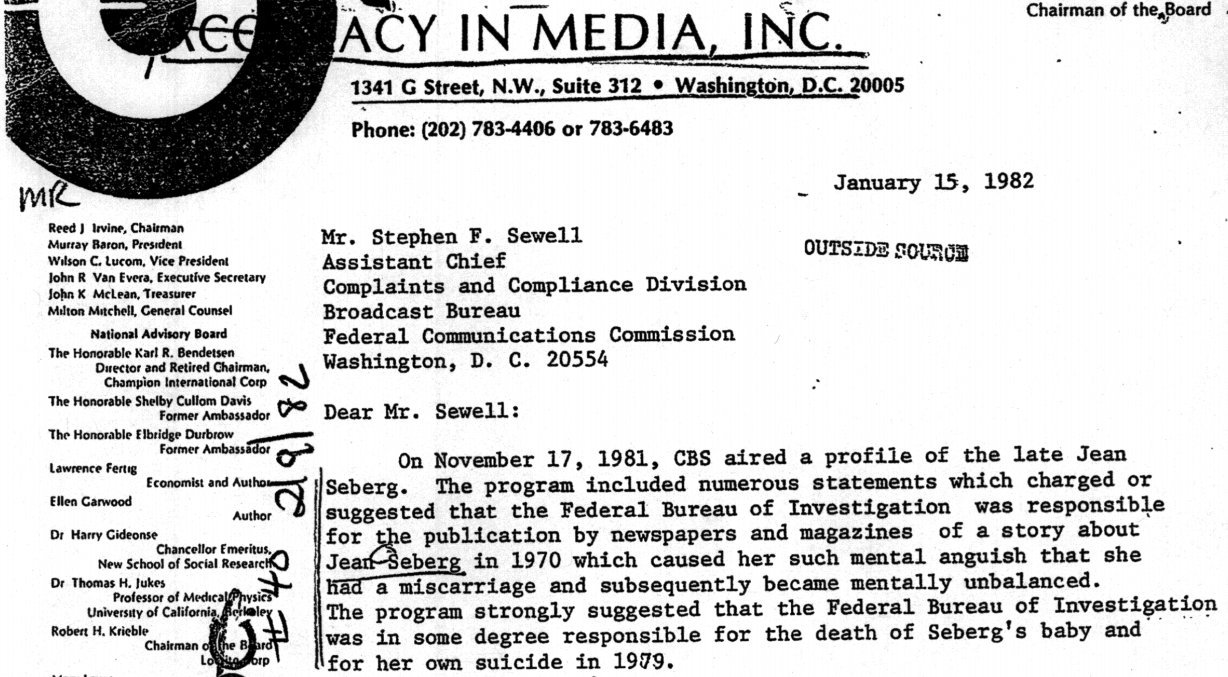 AIM’s contention revolved around four points. First, FBI HQ had never approved the proposal to leak the information to gossip columnists. Second, HQ was required to grant specific approval for such an operation. Third, HQ hadn’t given permission but they’d said “to wait approximately two additional months until Seberg’s pregnancy would be obvious to everyone,” and the article was printed before that. Fourth, the LA office withdrew the request.

A large portion of AIM’s argument amounted to the FBI having conspired to do it, but that they were beaten to the punch. At one point, AIM argued that the information was true (which rather than absolve the FBI of guilt, would have only increased the violation of privacy).

Finally, AIM argued that Seberg hadn’t been distressed by the article, also citing the file that had been released to them. AIM’s complaints didn’t fall on the deaf ears of the FCC - they reached others, and were promoted from there. A Washington Post article with no byline repeats and affirms AIM’s arguments, saying that the claims about Seberg aren’t necessary to point out the many problems with efforts such as COINTELPRO.

MuckRock has filed its own FOIA request to learn more about the matter and make its own judgment about the Seberg issue. In the meantime, you can read the release on AIM in its entirety below.