In 1955, the Central Intelligence Agency’s Psychological and Paramilitary Operations Staff made some inquiries through their point of contact at the State Department about the storage and accessibility of records concerning CIA operations. When they didn’t receive the answer they wanted, an informal suggestion led to a formal policy to circumvent those requirements by manipulating technicalities and appearances, and in some cases ignoring the records even existed. 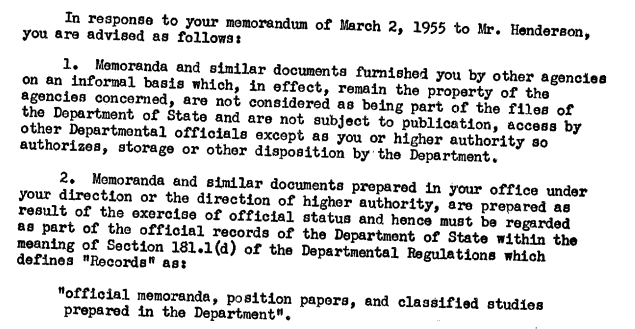 These files could, however, be transferred to other agencies. To protect the agency’s security, files could be described “by a code name” when meeting the requirements for transfer. 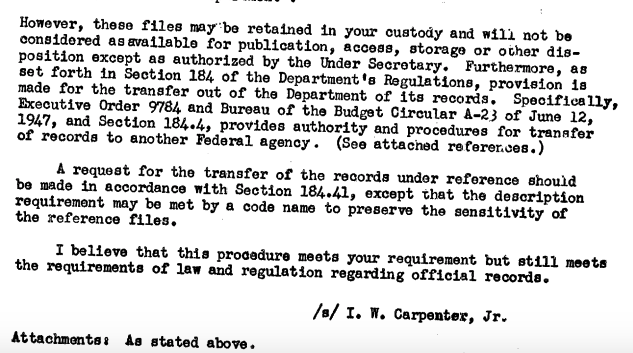 On June 9th, it was requested that Mr. Higgs, who would be handling the files, be furnished with a safe to proper store them. He was also instructed on proper inventory and security handling. 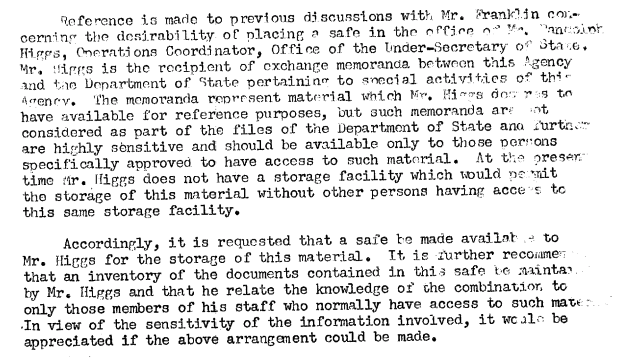 On approximately June 10th, these results were relayed in a memo to Frank Wisner, the Agency’s Deputy Director for Plans.

Higgs’ informal suggestion would have gone un-memorialized if not included in the memo to Wisner. Higgs’ memo simply referred to “some ideas” he wanted to discuss orally about the issue.

In the third week of June, a memo from Wisner was drafted. While the draft copy in the CIA’s archives, originally classified SECRET, is unsigned, part of the policy it outlined remained classified in 2002 to protect intelligence sources and methods. If aversion of the memo was signed, it would have implemented the suggestion made by Higgs. State Department records would technically be considered CIA records, and CIA records would be returned to the Agency as soon as they no longer needed them.

From the perspective of CIA’s Operational Security, the arrangement was virtually ideal. From the State Department’s perspective, it undoubtedly worked in the short-term. In the long-run, however, it denied the State Department an important form of institutional memory. From the perspective of FOIA requesters and archival researchers, it denied historians an important form of government transparency. And when it came to oversight, it left the CIA in control of who knew what.

MuckRock has filed a pair of FOIA requests to learn more. In the meantime, you can read the draft memo to Wisner below.

Image via US National Archives