The way you gain access to government records varies by state, but across the board requesters continue to face impediments in getting the docs. With 50 public records laws across the nation, which stand out as particularly good examples of how the process should work?

In 2015, the Center for Public Integrity ranked each state’s public records law and released their findings in the 2015 State Integrity Report. Their state analysis gives little hope for records laws as only three states scored higher than a D+. The report also shows how states can have countless exemptions and loopholes that hinder the release of records. 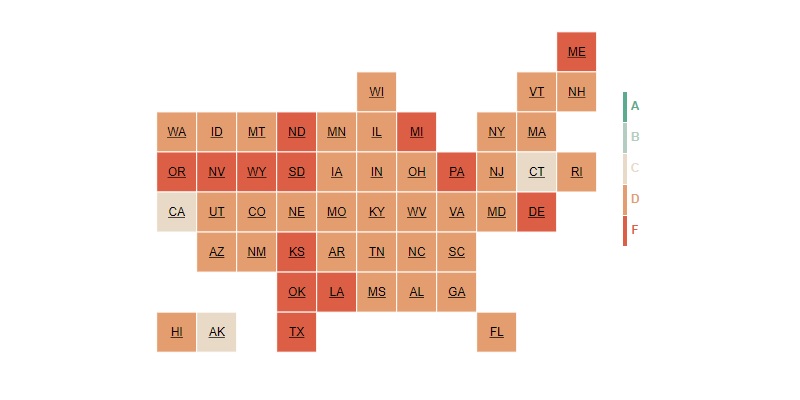 Tenessee is one of those states with numerous exemptions. The state is riddled with 563 exemptions in the statute with 25 new additions made during this year’s legislative session. Lawmakers are aware of the incredibly high number of exemptions and a new committee in the state is currently discussing the possibility of changing or even sunseting some exemptions. Even more tricky is the fact that some of these exemptions weren’t even included in the main parts of a bill. Often times, they’re hidden within much larger bills only coming to light after a bill has been passed and given legislative authority.

But still, exemptions in Florida double Tennessee’s. Over 1,000 exemptions can be found in Florida state law, with all applying to specific state records. Despite the large number of exemptions, Florida law is still touted as one of the best.

“Given both open meetings laws and open records embedded in the constitution, it is amazing, but it has its flaw,” said President of the First Amendment Foundation, Barbara Petersen.

Florida is a unique state as it allows its exemptions to be construed and narrowly applied. However, their public records law still applies to all branches of government and government entities since Sunshine Laws are mandated in the state. Additionally, Florida has a standard in the constitution for the creation and expansion of exemptions. This means that the legislature is the only one allowed to create an exemption and has to justify the public need for such exemption. Plus, the constitutional standard calls for a single subject bill so no exemptions get lost within larger bills, as is the case in Tennessee.

“We are frequently able to attack or narrow exemptions based on that constitutional standard,” said Petersen. “We have very few universal exemptions or those that apply to every agency in the state.”

But Petersen says Florida public records law lacks teeth in enforcement. If an agency decides to not release its documents, a requesters only option is to sue as there is no enforcement or no agency ensuring compliance. The opposite stands for Connecticut where strong penalties and enforcement reign supreme for the state’s agencies and only 25 exemptions govern the state.

“The substance [of the law] is good, because there are not that many exemptions. There is room for improvement, but at the end of the day chances are you’ll get your records. It’ll just take a long time,” said Legal Director for the ACLU of Connecticut, Dan Barrett.

Connecticut is known for its strong public records law encompassing all government agencies. But while the state’s law is substantively good, it is also a procedural nightmare.

“It is impossible to get people the information they need to participate in a democratic process if it takes over a year to get records,” said Barrett. “Agencies know this and are happy to stale the requester”

If an agency denies, ignores, or refuses to release the documents, Barrett says that it could take months to get a hearing for your case if you decide to take it up to the Freedom of Information Commission. The FOIC is the state’s ombudsman who intervenes in public record violations and issues orders on cases. The process is set up to succeed, but it proves lengthy and tedious.

Even in states like New York where an independent appeal board exists to facilitate the appeals process, requesters can see enourmous fees like this request to the New York State Department of Health.

Highest fee in each state

“The way [the law] is set up can work well for people who are just looking for records in local government and don’t want to hire a lawyer,” added Barrett.

California is also a fan-favorite when it comes to public records. Agencies have ten days to respond to requests, making it among the shortest for response times. Yet, its lack of a formal appeals process forces requesters seeking to overrule an agencies decisions to head to the courts. Unlike Florida, which releases police reports proactively, journalist seeking law enforcement records of any kind will face a major stone wall. Although recently, state Governor Jerry Brown signed into law a bill that makes internal police records and body camera footage public.

Whether it’s a procedural issue, an exemption problem, or a lack of enforcement, requesters are generally not happy with their public records. So, what can be done? One lawyer proposes creating a unified public records law as a solution for smoother public records laws. Other states have taken matters into their own hands like Washington, which created a new Legislative Task Force on Public Records to tackle their Legislature’s exemption to the public records act.

But overall, even the best of state laws seem to have flaws and most requesters acknowledge that their law needs more work.

Have some thoughts of your own? Let us know via the form below!

Image via Eielson Air Force Base