A little over a year ago, I took a look at what FOIA might look like under the Trump administration. Unfortunately for transparency, things have turned out much as we expected.

The slow get slower

When Donald J. Trump took office, our data found that the average federal FOIA request took 162 days to complete from the time it was filed. Now, that average has crept up to 169 days. Things weren’t helped when early on a hiring freeze was put in place across federal agencies: Some agencies we spoke with were at half or even a quarter of their planned staffing, bringing some departments to a virtual standstill. 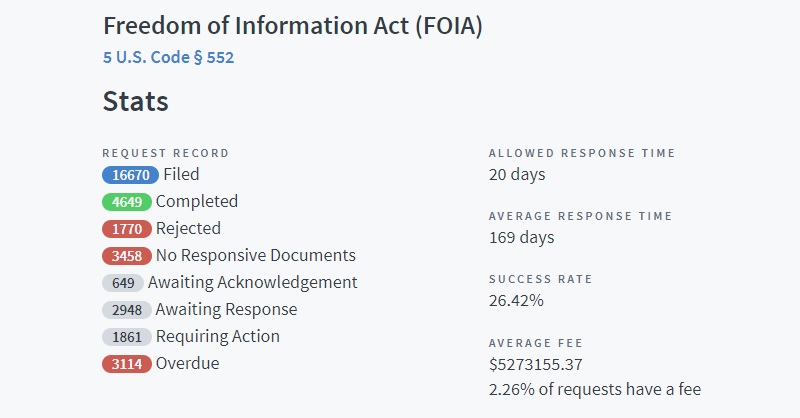 Things have gotten slightly better, but FOIA offices at agencies that receive a lot of requests are still rarely equipped with the people, technology, or training to meet the statutory deadlines of 20 days.

What was perhaps Trump’s single biggest transparency “win” in his first year had nothing to do with FOIA, and was actually set in motion decades earlier by former President George H.W. Bush: The final release of the JFK files.

That moment marked what was probably the president’s most vocal endorsement of transparency since entering office:

JFK Files are being carefully released. In the end there will be great transparency. It is my hope to get just about everything to public!

And it was a momentous release, even if it it didn’t quite meet the original deadline and even if things were a bit scattered. The National Archives and Mary Farrell Foundation both have good resources.

A lot of undecided and independent voters have had enough with Obama’s lack of transparency. I don't blame them.

Trump was decidedly less excited about other forms of transparency, including access to the White House visitor logs that the Obama administration had proactively provided online.

There’s been other odd moments. The New York Times had a story detailing how a consulting firm hired by the Environmental Protection Agency to work on media affairs was also using FOIA to try to root out “resistance”-friendly staffers from the same agency, which had a number of employees and former employees feeling very uncomfortable.

The State Department beefed up its FOIA resources, but here, too, was a political angle: Much of that work was focused on releasing emails related to Hillary Clinton’s time as Secretary of State, and even the extra detailing of staff was controversial: Some officials saw the work as a way to send them to Siberia rather than continuing on in their normal duties.

Other times the new administration has shown a lot less interest in transparency.

A scrubbing of the EPA’s climate change resources was widely noted, with teams preparing to archive information. Similar information released by the National Park Service disappeared, although the agency later promised it would return.

Another predictable change: A spike in FOIA lawsuits.

But the scope of that change was still startling, with a 26 percent jump in FOIA lawsuits compared to the year before Trump took office, according to The FOIA Project. That adds up to a 70 percent increase from just five years before, a remarkable jump. 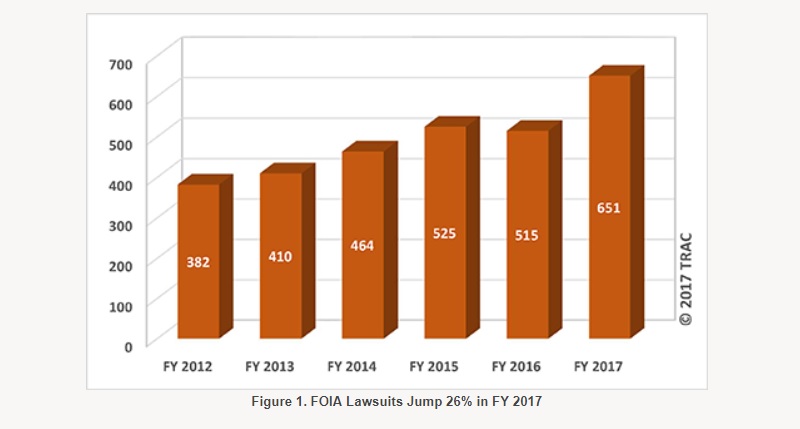 Image via The FOIA Project

As the FOIA Project noted:

This unprecedented increase was identified as a real crisis at a recent symposium convened at the Villanova University School of Law. The FOIA Project’s co-directors were asked to address the gathering in its opening session on the project’s findings. Representatives from media and advocacy organizations who were active FOIA litigants also brought their concerns to the forum.

What to look for next

Despite these transparency setbacks, FOIA is still working and helping hold government accountable and open to the people. You can follow along the work of MuckRock users and others on the FOIA the Trump Administration page to see what people are requesting and other FOIA news related to the current administration.

We’ll also get a better sense of how the FOIA process is fairing under Trump when the Justice Department releases its annual summary of Chief FOIA Officer reports, which likely will be released in March. Read previous FOIA Officer Reports on the Office of Information Policy’s website.

Join our Slack channel to share ideas for FOIAing the Trump administration or to get help with your own requests.