We’ve been getting lots of questions about what FOIA will look like under the Trump administration: How much impact does one president have? Will FOIA be useless? Transparency can be hard to predict, but here’s what I think might be coming.

Right now, according to our federal FOIA data, the average response time is 162 days.

And while the response time allowed by law is only 20 days, I think that waits are only going to get worse, at least for requests that are not small.

Part of the problem actually precedes the election: When FOIA reform passed, it severely restricted many of the common ways that agencies assess fees, particularly if they miss key deadlines with non-commercial requesters. Speaking with FOIA officers, not having fees to negotiate means that they’re looking for other ways to manage large workloads on shrunken budgets or push back on what they think are unreasonable requests.

The only other leverage FOIA offices feel they have now: Dragging out requests for years.

The other thing slowing requests down has traditionally been that FOIA offices are understaffed, particularly after the recession as FOIA budgets were deemed easier to trim than others.

Those budgets never quite recovered, and given the Trump administration’s focus on cutting spending on bureaucracy, I wouldn’t expect increased investments any time soon — I just hope the budgets don’t get furthered pared down.

Art of the FOIA

That means that unless you’ve got a lot of time to kill, FOIA requesters are going to need to learn to negotiate. Many agencies are willing to work with requesters to get what they want while trying to reduce the staff time needed to comply, and I expect that kind of negotiation to increase as FOIA offices look for ways to manage things going forward.

I’m hopeful that small, targeted requests might actually get out the door sooner than they have been: Already, it seems agencies are revamping their queues,

Part of that dealmaking process could be an increased role and more independence for the Office of Government Information Services, the FOIA ombuds office. OGIS provides mediation services between agencies and requesters, which I’ve found mostly helpful when the two sides are talking past each other. OGIS still does not have any enforcement powers, and is still a tiny federal office with a massive domain to monitor, but some of the constraints it previously worked under have been lightened, if not removed entirely.

It will be interesting to watch OGIS during the first year of administration and see the impact it has, particularly as Alina M. Semo continues to settle into her role as the office’s new head.

hmm Labor Department's Women's Bureau seems to have recently/hastily put up a link for public to download all its files en masse pic.twitter.com/9dxeZB8x4e

In addition to intentional or strategic deletions, federal IT systems and staffing are already fragile, and cuts or mass departures of technical staff could mean vast amounts of data disappear as collateral damage. Already, a number of efforts are underway to try and preserve important data sets, but in the future there’s a very good chance many of those data sets just won’t be collected, meaning one less valuable item to FOIA.

Not all the signs are bleak, however. As FiveThirtyEight noted, commerce secretary nominee Wilbur Ross gave a strong nod to the importance of good government data:

If confirmed, Ross would oversee several of the government’s most important statistical agencies, including the Census Bureau and the Bureau of Economic Analysis (which produces the government’s official figures for gross domestic product and other economic statistics). Ross positioned himself as an advocate for data, noting during his opening statement that he had been a frequent user of government data during his business career, and had even worked as a census taker while in business school. He said he had learned in business that, “Anything you can’t measure you can’t manage.”

In recent years, some Republicans in Congress have tried to restrict government data collection and to cut funding to the Census Bureau and other statistical agencies. Ross signaled he will fight those efforts. “It’s been hard getting the commitment for the appropriations that census really needs for its mission,” he said.

My bet is the impact of disappearing data will be scattered but consequential.

Much of FOIA has always been a balancing test between national security and accountability; individual privacy against transparency. I have a strong expectation that, with top executives pulled from the private sector, we’ll see increase deference given to Exemption 4, “trade secrets and commercial or financial information obtained from a person [that is] privileged or confidential.”

This could mean it’s harder to gain insight into settlements, fraud investigations, safety hazards and more. A broadened Exemption 4 would be particularly concerning if we see increasing amounts of traditionally government activity outsourced to private contractors, meaning the public has less and less oversight over how its will is being carried out.

For the past five years, FOIA lawsuits have been increasing, as the FOIA Project has dutifully noted, and I expect that trend to continue. For a while, FOIA litigation seemed to stall as traditional news organizations saw budgets slashed, but now independent journalists, new media, and advocacy organizations have picked up any slack. 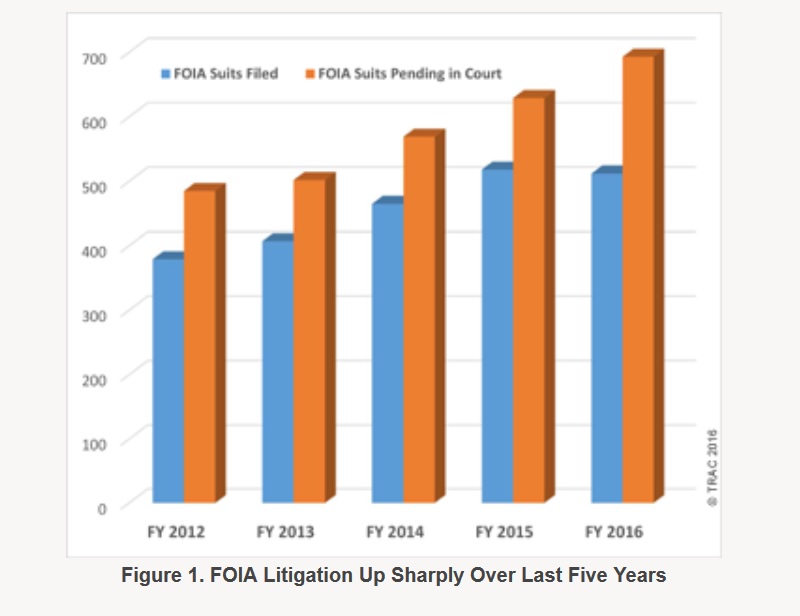 A number of lawyers have already announced a willingness to sue the Trump administration pro bono if it withholds public information, while Ryan Shapiro and Jeffrey Light are building a specific litigation campaign focused on the new president. I expect non-profits ( ah-hem ), advocacy organizations, new and the better funded traditional media, and individuals will be also be aggressive litigants.

But the proof will be in the pudding. It will be interesting to see, 100 days and a year from now, if that 162 day wait goes up or down - and if the new administration chooses to honor its obligation of accountability to the American people.