The government’s decades-long psychic research program brought agents to Mars, predicted the rise of Trump, and (according to them) prevented as-yet unknown disasters.

Or at least, they tried.

From the late ’70s to the mid ’90s, the Army, Central Intelligence Agency, Defense Intelligence Agency, and others all looked into the applications of “remote viewing,” psychically inducing agents to locate, identify, and describe specific remote targets and locations.

For a program with such far-reaching geopolitical repercussions, it was clear that the process needed some form of standardization. The United States Army Materiel Systems Analysis Activity’s “GRILL FLAME PROTOCOL, AMSAA APPLIED REMOTE VIEWING PROTOCOL,” is an attempt to thoroughly test and detail the process of remote viewing to establish it as a part of their overall intelligence gathering efforts.

The eight page document includes the military objectives and applications of the program, key term definitions, and detailed remote viewing procedures. It essentially acts as an instruction manual for the process of remote viewing, taking into consideration variations, effectiveness, selection of participants, and ultimately, evaluation.

The document breaks the remote viewing process into four parts:

To select a remote geographical target, a “target pool” of 50-100 geographical coordinates was randomly selected and presented to the remote viewer.

In the preliminary portion of the process, the viewer is informed of what will occur. Viewers were expected[to state “raw perceptions” and avoid specific interpretations of what they saw or heard during the session. That being said, AMSAA were sure to include this reminder in the protocol:

The protocol begins with a literal pep-talk …

and then a 15 minute moment of silence that, according to non-existent data, enhances the process.

After the alloted quiet time, the “viewing period” begins. For fifteen minutes, the viewer and the coach work together in conversation to “intellectually” move around the remote location and describe the area. The session is recorded and the viewer may write or draw what they see depending on their preferences.

In the post-session analysis, the information gathered remotely is cross-referenced with actual information from the site. The coach and viewer talk about their findings and the viewer is informed of how successful they were.

In the variations section, they introduce the concept of “beacons,” individuals used to heighten the effectiveness of the remote viewing process.

In this case, the remote viewer is given biographical information about the preselected “beacon.’ Sometimes, the pair briefly meets. The beacon then travels to the remote geographical location to interact with the environment while the viewer is in their session. Besides geographical coordinates and individual “beacons,” specific structures or identifiable vehicles may also be used as points of contact to induce the viewer’s psychic visions.

A 1984 memo details the differences between an “altered states” approach to remote viewing, and a “naturalistic” approach like the one AMSAA took. The following is a point-by-point comparison of both techniques, from the Monroe Institute of Applied Sciences’ and SRI International. 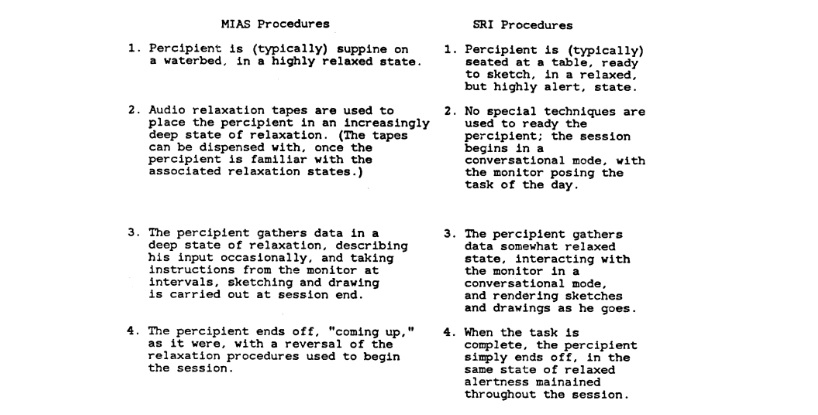 MIAS’ approach puts the focus on getting the viewer to enter into an “altered state” through waterbeds and relaxation tapes. SRI’s approach foregoes special techniques in favor of a more conversational environment.

If you want to see if these methods are sufficient for your remote viewing needs, find a quiet room and some willing friends. Though there is no evidence of adverse psychological or medial effects on the remote viewer, it might be a good idea to make some copies of this remote viewing liability form just to be safe.

The remote viewing protocols are embedded below.