Secretary of Education Betsy DeVos and other critics claim that current Title IX policies - most notably the Obama-era Dear Colleague letter which forced colleges to use the lowest possible standard of proof when investigating sexual assault cases - are unfair to the accused, denying them of due process and unjustly persecuting them. Devos has since formally rescinded the letter.

However, a recently-released list of all closed Title IX complaints regarding sexual assault at postsecondary institutions shows that after the Dear Colleague letter was introduced, there were more resolved reports of institutions mishandling cases of sexual violence; over two-thirds of all such cases that have ever been resolved in the history of Title IX, according to the available DOE data, were closed after the direction was issued. This is not a coincidence. In an interview with the Huffington Post, managing director of End Rape on Campus Jess Davidson pointed to the letter as a concrete way to hold universities accountable, as it states in writing the protections they’re legally obliged to provide. 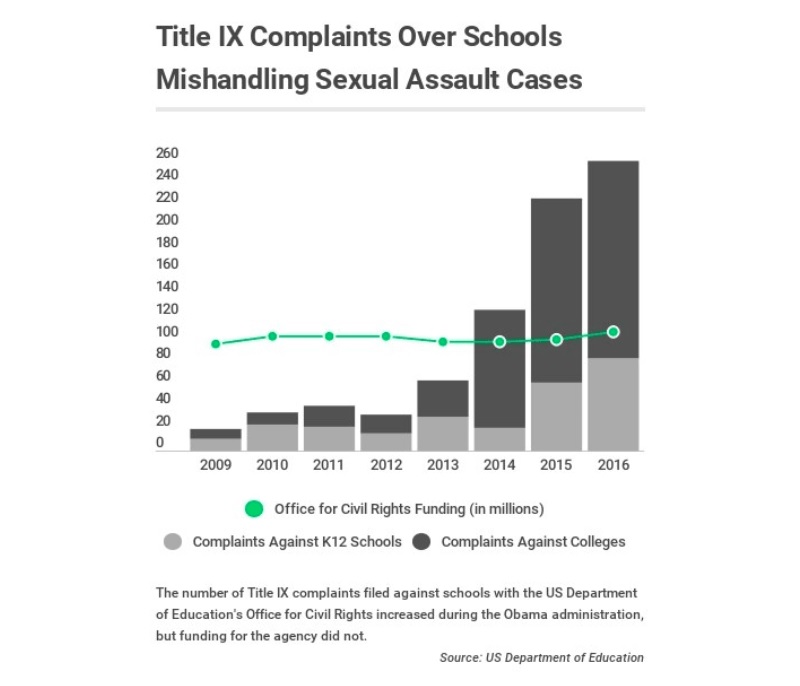 As a rough point of reference, just the log of complaints made under Title IX - which, granted, don’t each become their own investigation - contains thousands of entries spanning literally hundreds of pages.

We’re still waiting for the Department of Education (DOE) to complete our request for current open Title IX investigations. Other organizations have reported in the past that, much like the large backlog of untested rape kits, uninvestigated Title IX complaints are also piling up. As of March, there were 311 open cases.

According to the DOE’s Office for Civil Rights, Title IX complaints have “quadrupled from 315 to 1,311 cases over the last five years,” with a large rise in those still pending a response. This, they said, “jeopardizes [students] access to education.”

Sexual violence has long been endemic to college campuses, and recent high-profile cases have been leading the push for change. Retracting more stringent policies now is a step backwards. We’ll be following the DOE’s new guidelines and waiting for the release of an updated list of open investigations.

View the list of closed investigations embedded below, or on the request page.

Image by Gage Skidmore via Wikimedia Commons and licensed under Creative Commons BY-SA 2.0.

Vanessa Nason sent this request to the U.S. Department of Education of the United States of America

Vanessa Nason sent this request to the U.S. Department of Education of the United States of America

Tom Nash sent this request to the Department of Education, Office of Civil Rights of the United States of America