As late as 1990, reports collected by the Pentagon show the U.S. Government was willing to take seriously reports that the Soviets were able to manifest “ball lightning” by using the brain as a “superconductor.” 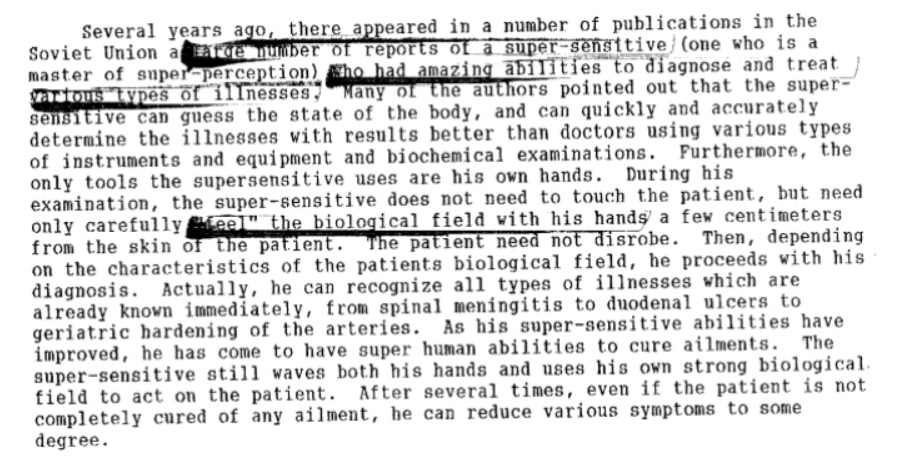 The translation goes on to describe a conversation with the “deputy director of the Soviet Academy of Sciences Radio Technology and Electronics Institute and director of the Radio Electronics Remote Sensing Methods Graduate Body Laboratory.” Their conversation soon turned to a “mysterious biological field” and a “plan which can detect evidence of a crime” and transmitting it - but only to a super-sensitive who “can cause his biological field to intensify six fold.” They then referenced the work of Franz Mesmer, a man who was discredited over 200 years ago.

The Soviet then asserted that the brain somehow acts a superconductor, which allowed super-sensitives to create “ball lightning” within a “channel” of energy which they would create by concentrating and presumably superconducting.

According to discussions with a lab researcher, physicist, and mathematician, the Soviets had, while researching control of body temperature, discovered that “the electrical power source is on the skin.”

They also explained that the body’s “electric power source” was the result of “friction generated electricity” - commonly known as static electricity.

Their conversation then turned to using the heat produced by the human body as a power source. Yes, that is basically the plot of The Matrix.

The translation also reports that these “super-sensitives” are able to bring dead plants back to life. Yes, that and using touch to magically heal people is basically the plot of E.T.

If you’re at all incredulous about these super humans who can resurrect plants, heal people with their hands, and shoot ball lightning out of them, then “your [sic] are an arrogant stupid ass” - at least according to the document.

You can read the full article, which again, the Pentagon felt was worth translating and which CIA preserved, below.