Sergei Kourdakov’s story is controversial, unusual, and utterly unforgettable. From when the Soviet defector swam from a Russian trawler to Canada until his supposed accidental suicide with a gun a Central Intelligence Agency officer allegedly told him to illegally get shortly before he would testify before Congress, his tale is straight out of a pulp fiction spy thriller - with an evangelical twist complete with bible smugglers who may have had CIA ties of their own. 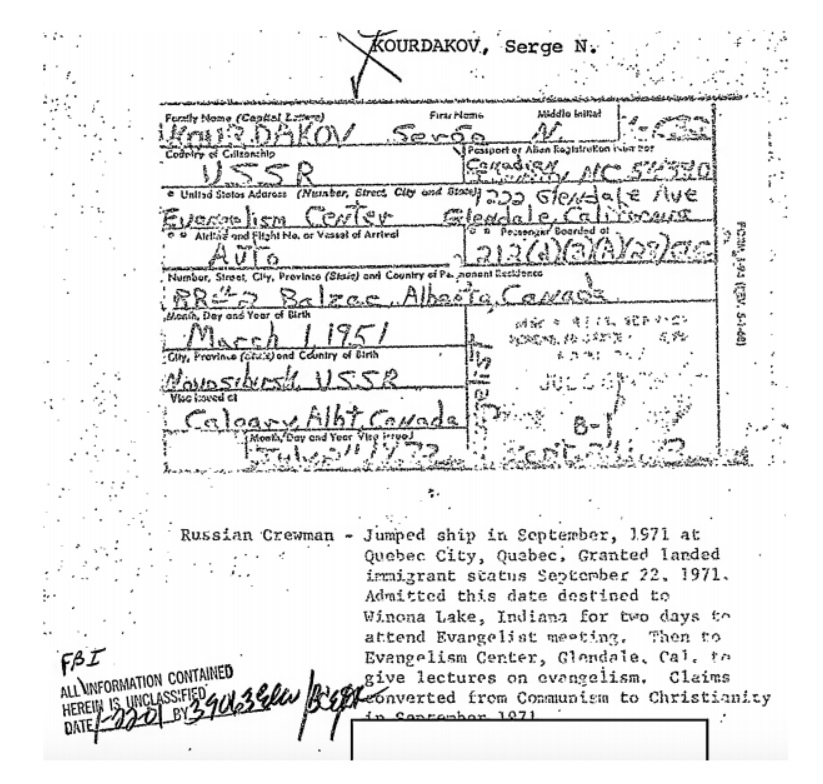 In response to a recently filed FOIA request, the Federal Bureau of Investigation released a preprocessed and heavily redacted copy of Kourdakov’s file (an appeal has been filed for the full file). While the file reveals a number of things - including the Bureau’s decision to not investigate the alleged suicide - other details emerge when the file is compared the contemporary record. His story effectively began in 1971, when Kourdakov swam to Canada from the Soviet ship he had been crewing. After a series of interviews with Canadian intelligence and security services including the Royal Canadian Mounted Police, Kourdakov made his way to the United States, drawing the attention of several members of Congress who expressed interest in sponsoring special legislation to provide the defector with permanent residency.

Broger, however, was far from an ordinary evangelical Christian. A senior officer with the Pentagon, Broger had served as the Deputy Director and later the Director of Information for the Armed Forces, and had been largely responsible for the development of the Pentagon’s Militant Liberty: A Program of Evaluation and Assessment of Freedom. Shortly after Kourdakov’s death, the FBI noted that Broger disclaimed any real relationship with the defector, insisting that he had merely introduced him to government officials to be interviewed. From the earliest interviews, Kourdakov told the Bureau that he had been the subject of threats and requested protection - information which the Bureau would withhold after Kourdakov’s mysterious death.

Underground Evangelism was unusual for reasons beyond its association with one of the Pentagon’s senior Information Operations officers and with a Soviet defector. Far from simply being an ordinary domestic evangelical group, the group was best known for their smuggling activities. According to the group’s leadership, they would eventually be responsible for smuggling “more than 40,652,407 copies of Bibles and other religious publications” into Communist countries. These activities were accompanied by persistent accusations of ties to CIA, accusations which were just as persistently denied by the group’s leadership.

These accusations didn’t merely arise from outside the group - they were levied by some of its employees. UPI reported that according to another aid group, International Christian Aid (also known as ICA and Inter-Aid, previously Underground Evangelism) had “about $50 million … (and) has an incredibly onerous system for its employees, including security checks that would do justice to the CIA [sic], non-disclosure statements they have to sign.” According to the New York Times, “at least one employee told investigators that security was so tight that some workers were convinced that Inter-Aid was being used as a cover for Central Intelligence Agency operatives in developing countries.” At the time, the Agency denied any affiliation with the group.

The truth of the matter is unsurprisingly murky. The Agency typically disclaims any affiliation with private groups or refuses to comment. There’s no shortage of examples, such as The Asia Foundation, where the Agency has tried to deny or minimize their affiliation with a group, only to be later proven wrong. The truth is often hard, if not impossible, to suss out. The only apparent reference to the group in the Agency’s declassified archives is an article from the Washington Times titled “How the N.Y. Times destroyed a charity,” which presents the accusations as unsubstantiated “gossip of former ICA employees.” The Agency underlined the allegations that ICA was a CIA front which the Washington Times sought to debunk. Also underlined were accusations that ICA had diverted funds to Swiss bank accounts.

Curiously, the general accusations of fraud against Underground Evangelism/ICA had been brought up before, with a Congressman requesting that the FBI investigate the group for fraud. The Congressman had also apparently contacted the IRS and the California Tax Franchise Board to look into the group. 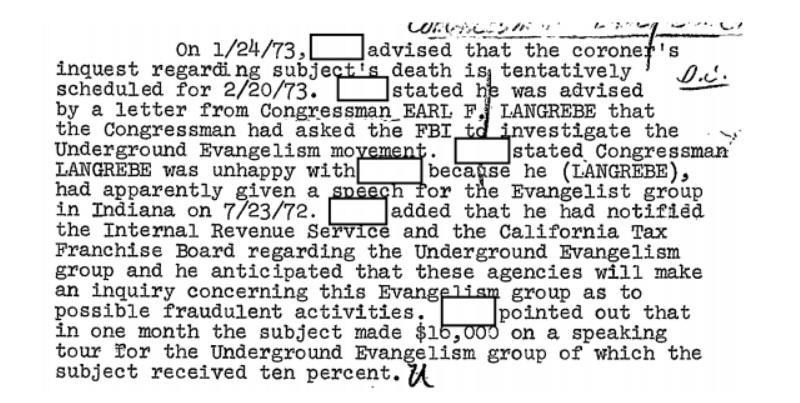 While declassified State Department cables don’t directly contradict CIA’s denial, they do complicate matters. One diplomatic cable from 1977 reveals that ICA was, with the State Department’s knowledge, covertly supporting a group which also received covert support from Radio Free Europe/Radio Liberty, a government funded pair of groups that had been created and previously controlled by CIA. The Agency had given up direct control of RFE/RL, but continued to play a less direct role in their operations. For several years, Congress was under the impression that RFE/RL had already severed its ties with the Agency, only to be disillusioned of this in 1971. The Agency’s memos also showed that they considered technical compliance with Congress’ orders by terminating this relationship, and then resuming it.

The declassified diplomatic cable shows that, in 1977, RFE/RL was secretly supplying a group identified as Verein with copies of documents under a legend - essentially a false story to explain their origin.

The cable also identifies Underground Evangelism as another covert sponsor of Verein, stressing that the relationship is not to be revealed. The name of the group’s president confirms that it is the same group that brought Kourdakov to the U.S. and which Broger was affiliated with.

While this doesn’t confirm the allegations from its employees that the Christian smuggling organization was tied to the Agency itself, it is at least the second confirmed tie to U.S. Government information operations/propaganda efforts. Kourdakov’s relationship with the group certainly fell in the latter category, though in a domestic manner. Kourdakov worked with Underground Evangelism, touring and giving speeches and presentations about religious persecution in the Soviet Union, as well as his conversion to Christianity. A brief security report in Kourdakov’s FBI file noted one of the milder instances where he reported having abused Christians in the Soviet Union on behalf of their government. Other examples reportedly included forcing games of Russian roulette onto people as a threat, along with various other threats and humiliations. 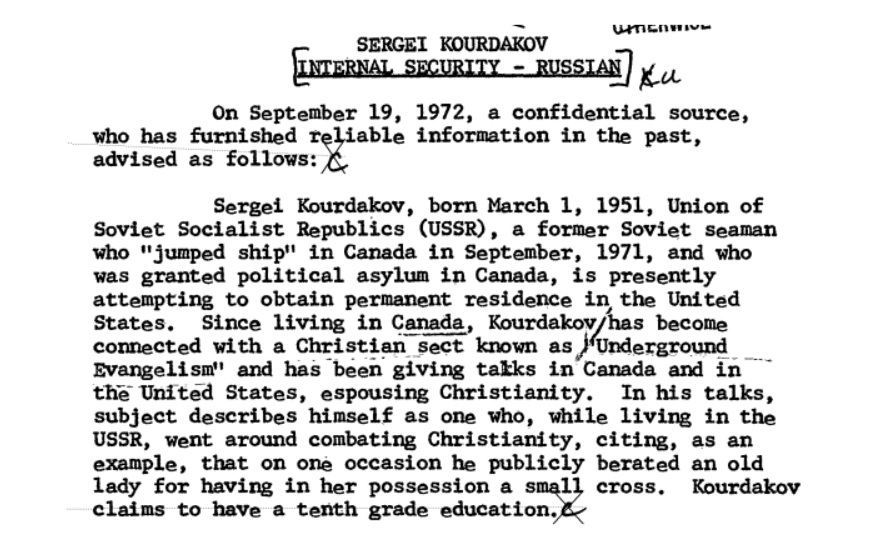 While it is known that Kourdakov was interviewed by the Agency at least once, though the nature of their relationship is somewhat murkier. Several references to Kourdakov can be found in the Agency’s declassified database. A September 29th, 1972 journal entry, declassified in April of 2003, from CIA’s Office of Legislative Counsel describes a mundane inquiry from a Congressional staffer on Kourdakov, in which CIA noted that Broger was had provided information to the Congressman’s office.

Complicating the question of Kourdakov’s relationship with the Agency, another copy of the same journal entry was reviewed for declassification eight months later. At this point, CIA redacted the long-dead Kourdakov’s name as an intelligence source or method.

These entries in CIA’s journal came less than three months before Kourdakov’s alleged accidental suicide. After this and up until his death, Kourdakov doesn’t seem to appear in any of the declassified and available files. Several details of the next month and a half are filled in by contemporary records, however. During this time, Kourdakov was staying with friends - the Johnson family in Cerritos, California. A highly religious family, the family’s mother worked for a church and the father was an electrician who may have also done work for Underground Evangelism. In addition to their 21-year old son, the same age as Kourdakov, Mr. and Mrs. Johnson also had a seventeen year old daughter, Ann, who would soon be thrust into the spotlight. Ann would not only befriend Kourdakov, by the time of his death (to which she was allegedly the only witness - a fact which is disputed), she was his underage fiancee.

At the time, Kourdakov was traveling under a pseudonym, John Divinsky, which had reportedly been suggested by Underground Evangelism’s “unofficial friends” in Washington, according to the group’s president. This not only hints at the group’s shadowy ties to various government agencies, it seems to be confirmation of such ties from the group’s senior most leadership. 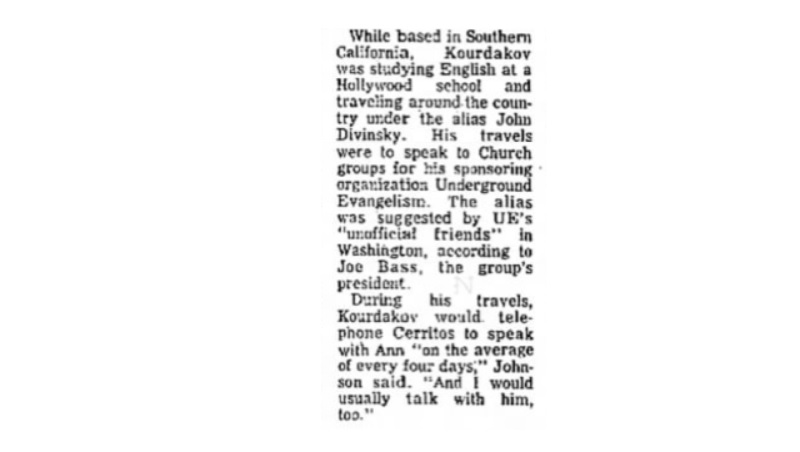 Kourdakov reported several threats against himself in the coming months, including at least one reported warning from a CIA officer. At the inquest following Kourdakov’s death, the revolver he was shot with was discussed. The weapon had belonged to Ann’s father, who had given it to Kourdakov in response to the man’s fear for his life. At least two contemporary newspapers reported that Mr. Johnson testified that he had given the weapon to Kourdakov despite knowing that it was illegal for the man to carry a possess a gun. Mr. Johnson also testified that the idea had been given to Kourdakov by someone from CIA whom he had encountered in Washington D.C. on a recent trip. 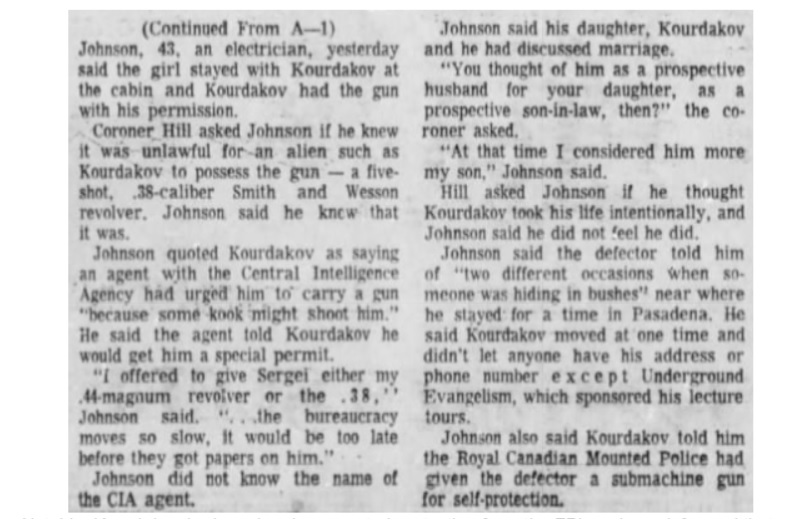 Notably, Kourdakov had previously requested protection from the FBI, and was informed that the Bureau didn’t do that. 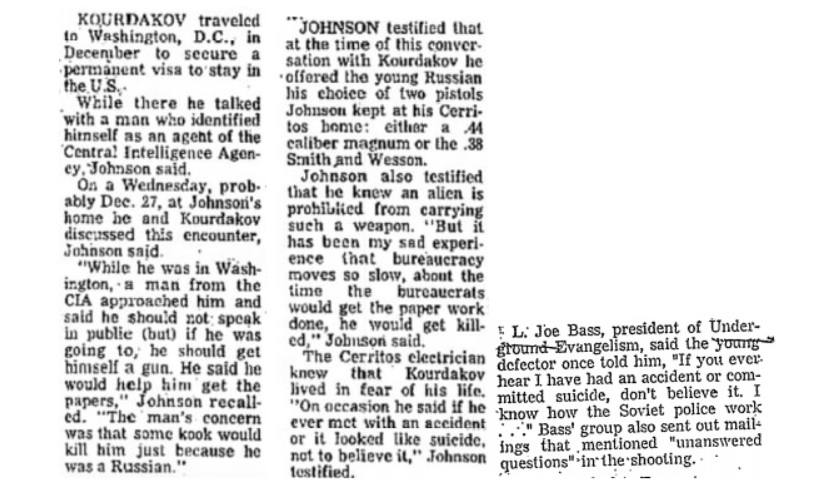 The Agency’s declassified database contains a single reference to the weapon and Kourdakov’s death. The journal entry from the Office of Legislative Counsel, written two weeks after Kourdakov’s death, states that their only information was secondhand and, by that point, a week out of date. According to the information which CIA provided, Kourdakov had “accidentally shot himself” out of ignorance and “presumably as a prank.”

Possible corroboration of these meetings with CIA, if not their contents, appears to come in an FBI memo written soon after Kourdakov’s death, noting that he had met with personnel assigned to an unknown government office in early December, that the names of at least two of these personnel had been known to Kourdakov from his time in CIA. In context, it is all but certain that the redacted office would have to be either the State Department or the Agency, with the former having no apparent need to be redacted.

Another version of events described in a newspaper printed three days after Kourdakov’s death, and excerpted in his FBI file, contradicts the origins of the gun entirely. According to The Register, Kourdakov had “borrowed the gun from a Denver friend,” not the Johnson family in Cerritos, CA.

The description above of Kourdakov’s “accidental” death is rather typical, with police almost immediately ruling out foul play and suggesting everything from a game of Russian roulette with the worst possible odds to suicide and eventually simply an accident, which was the final official ruling. Nearly every aspect of the story of Kourdakov’s death would be contradicted at least once, however. 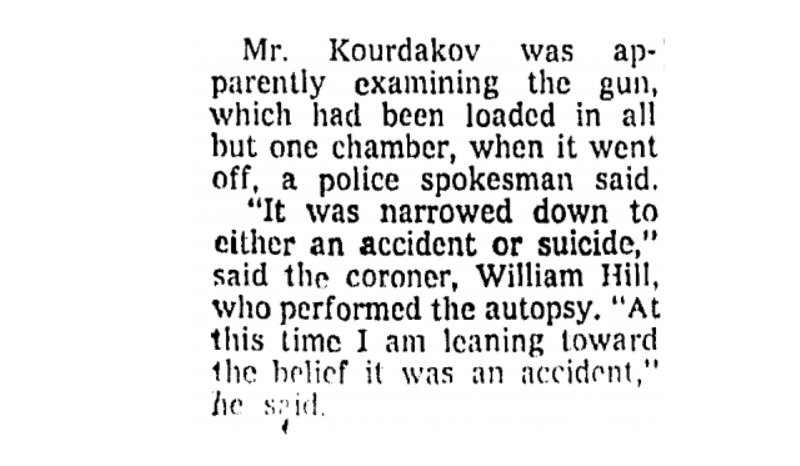