In late 1989, the Rockefeller family faced an unusual dilemma: they wanted to give a barn away. For most people with their money and resources, this would be a relatively minor headache, but for the Rockefellers, the problem was a bit more complicated - inside the barn was a vault, which contained locked file cabinets that were filled with classified information, some belonging to the CIA.

The issue apparently be traced back to 1975, when then-Vice President Nelson A. Rockefeller, or NAR as he is sometimes referred to in the documents, had asked Staff Security Officer Ralph Martin to have a vault at the Rockefeller estate in Pocantico Hills surveyed by CIA’s security staff. That December, CIA officers surveyed the property and made several recommendations regarding security. After these recommendations were implemented, CIA’s Director of Security, Robert Gambino, certified that the vault met “the minimum physical security standards for the storage of classified material, including sensitive compartment information [SCIF].” 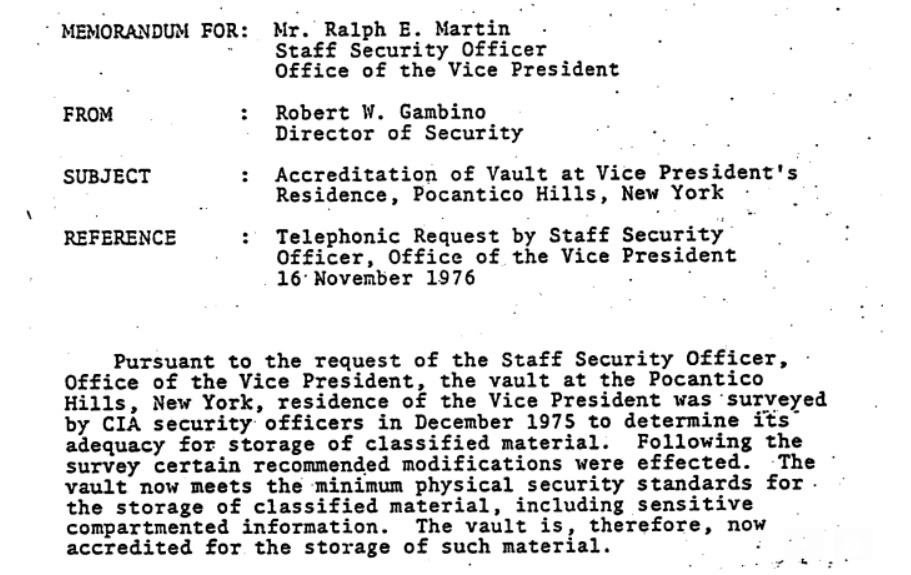 The vault apparently remained in place, and the documents undisturbed, until 1979. According to a formerly CONFIDENTIAL memo, the vault “fell through the cracks” as a result of a “unique” situation. The situation would have remained lost between the cracks if not for the attempt to give the barn away, and the subsequent notice to CIA from Judge Harold Tyler. The matter had, as it turned out, been completely lost to the Agency, whose Special Security Center didn’t have any records on the Rockefeller SCIF until after Judge Tyler contacted CIA about it.

Although Judge Tyler’s letters weren’t released in the declassified file, he apparently called the then-CIA Director, Judge Webster, about the issue. The Director wrote back after he confirmed that CIA had authorized the site, and to inform him that people from CIA’s Office of Security were available to review the material and assess the matter. 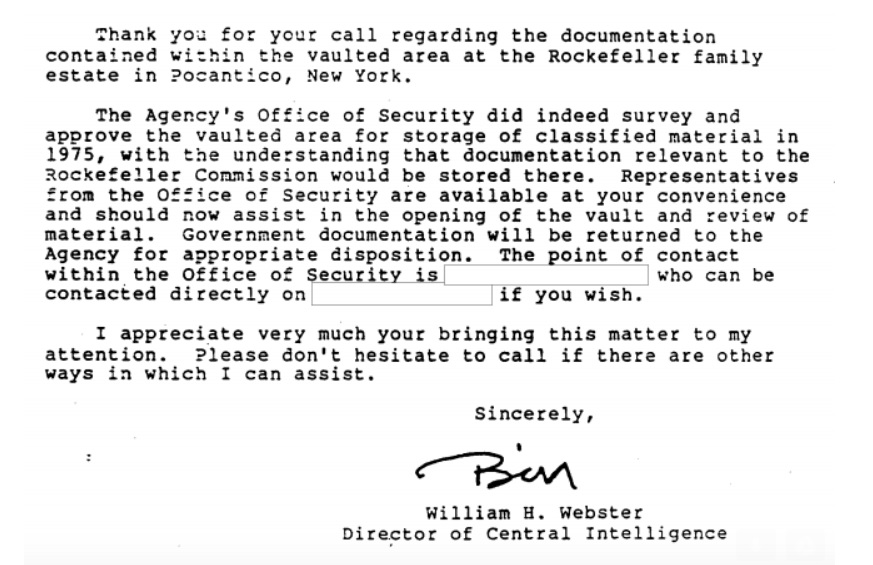 A CIA memo describes the vault itself. The vault was apparently located “in the basement of carriage house.” In addition to personal papers, there were three “four-drawer safes” full of “personal memoranda, generic reports, briefings and documents” that ranged from Limited Official Use Only to TOP SECRET or Codeword classified.

The memo went on to note that while the facility “technically” met the criteria for TS/SCI storage, this was “negatively impacted” by the Rockefeller staff having the combinations to the safes, and that “numerous staff” had access to the vault. While there were alarms that would notify the Rockefeller security, there was apparently no procedure in place for coordinating with the U.S. Government over a possible breach of these classified materials.

This was something of a problem, considering that in addition to documents classified SECRET and below, there were 327 TOP SECRET and SCI documents covering a variety of topics. 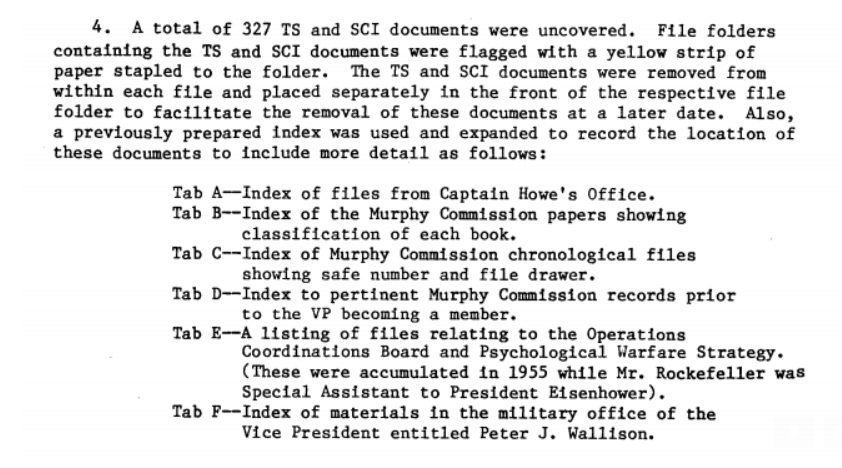 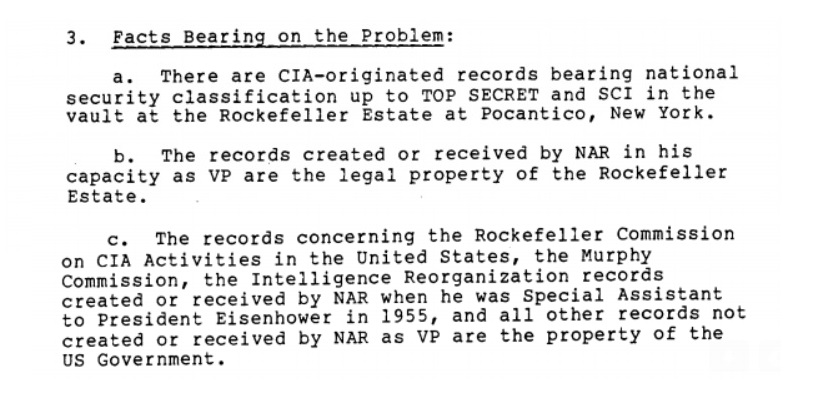 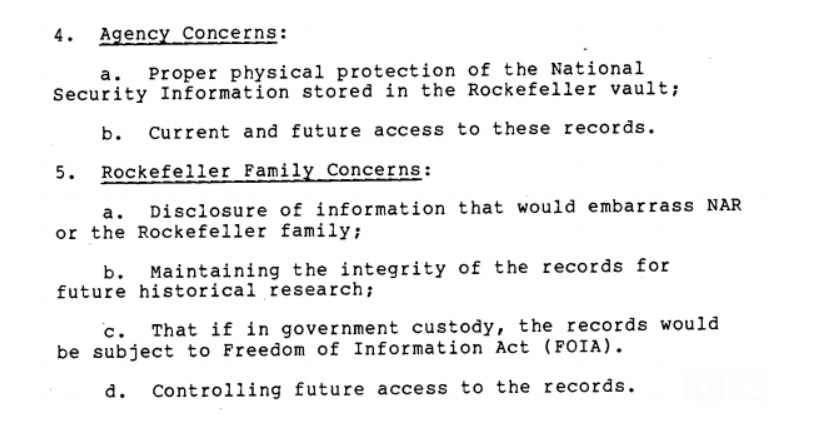 The solution that they settled on was sending the entire collection to the Ford Presidential Library, which had been approved for by the Agency for storage of TOP SECRET and SCI documents. Mrs. Rockefeller would control access to the documents, while CIA and other agencies would retain control of the classified information. The Agency also note that “once deposited with the Ford library, the records would not be subject to FOIA.”

To aid in this process, it was recommended that Mrs. Rockefeller be granted a clearance for information classified SECRET.

Several other issues, however, remain unaddressed. A draft memo from CIA’s Director of Security noted that there was no precedent, and the Agency would be unable to accredit the vault for storage after the Vice President left office.

Nevertheless, the Vice President had apparently planned to do exactly that.

A memo drafted a week later by the “Acting Director of Security” was rewritten the next day at the request of someone, whose name remains redacted, to omit a similar reference to the restriction. 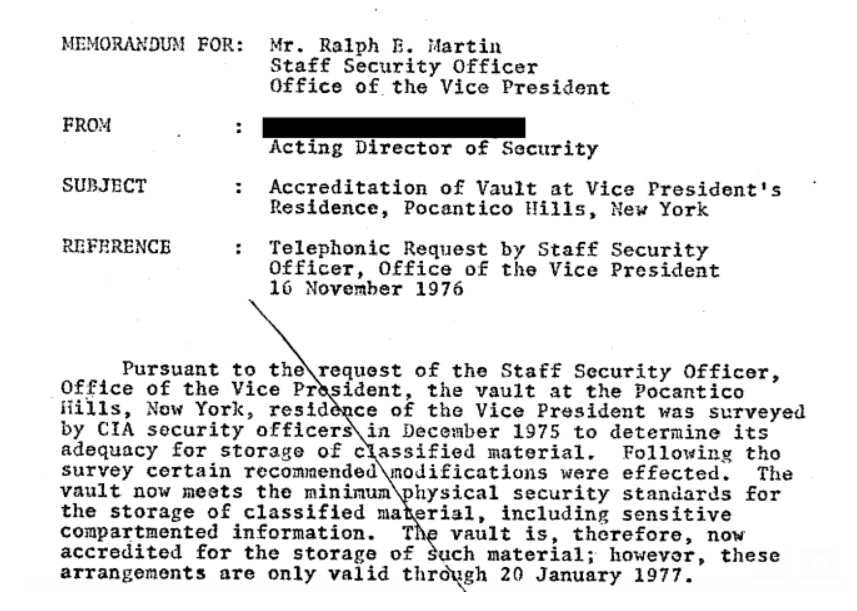 A FOIA request has been filed for additional materials on the Rockefeller SCIF. While that processes, you can read the original CIA memo below.