A common question, especially as MuckRock continues to explore CIA and DIA’s involvement in psychic research, is how so many resources wound up being wasted on frivolous efforts that produced laughable results, absurd guides and even more absurd worries. The FBI’s file on Extrasensory Perception (ESP), which predates the CIA’s declassified psychic research program by more than a decade, may hold the answer: a basic failure to understand how math works. 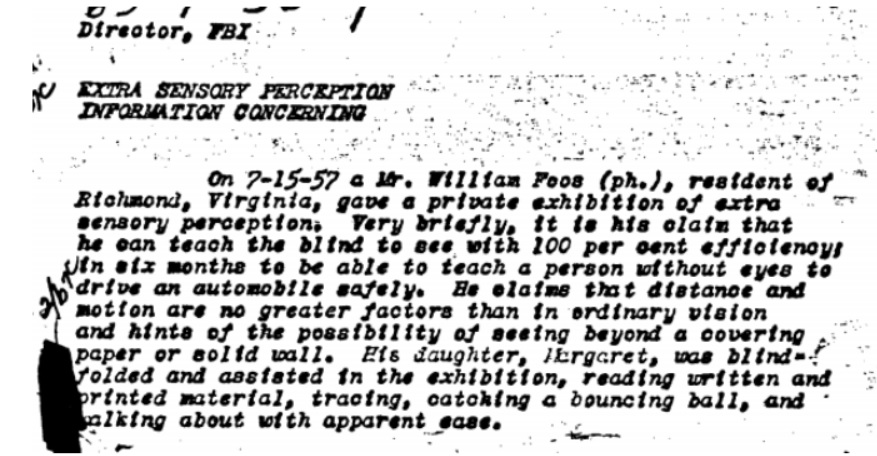 The FBI’s interest in ESP goes back to at least 1957 (although scattered references to the Duke University ESP studies hint that the interest may have gone back another five years before that) when the Bureau was contacted by a man called Foos who claimed that he could teach the blind to see. Significantly, CIA took note of the case and had not only reviewed the information as part of the Agency’s liaison with the FBI. While CIA was not impressed by the tricks of the charlatan Foos, it wouldn’t be the end of the Agency’s or the FBI’s interest in psychic and paranormal phenomena. 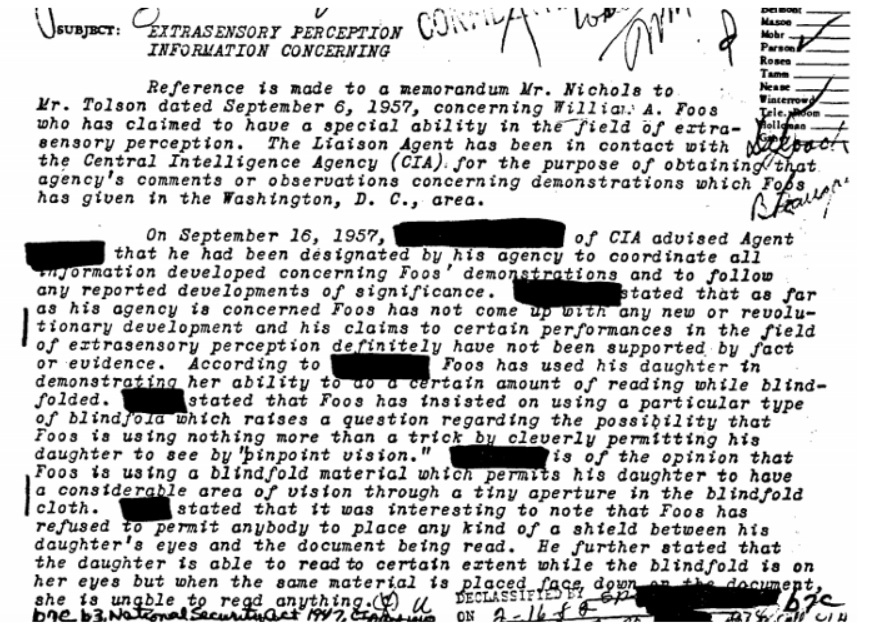 To the FBI’s credit, the Bureau attempted to look at the phenomena from a rational and logical viewpoint, using cold hard science and math much like CIA and DIA later would. In their attempt to construct a laboratory test to objectively measure psychic phenomena, however, the FBI’s description comes across more like the opening scene of Ghostbusters than an actual scientific analysis.

Using a set of cards similar to the ones used in Ghostbusters to attempt to provoke an extrasensory response in the target, the laboratory conditions for the admittedly basic test may have been sufficient. The Bureau’s problem was with understanding the math involved and how probabilities worked, apparently lacking a middle schoolers understanding of probability.

While the FBI’s memo was correct that an average above one in five would have been above the statistically likely outcome, it could hardly be more inaccurate in its claim that the results would “not [be] explainable by mere chance.” As anyone with a basic understanding of probabilities knows, any non-zero probability can happen by mere chance and, given enough opportunities, it will happen. By confusing the improbable for the impossible, or the “not explainable by mere chance”, the interpretation of the test results would provide misleading information and encouraging confirmation bias in anyone who wants to believe.

Whoever wrote the protocols for the test didn’t consider that results below average would also be inexplicable by mere chance, nor what the implications of the protocol would be if applied to other tests. Imagine a test designed to determine psychokinetic ability, wherein a coin is flipped twenty times. Statistically, it should turn up heads and tails an equal number of times. The margin of error, however, means that this won’t always be the case. If the coin were to land on heads 11 times and tails only 9, this would still be explainable by mere chance.

While the FBI’s description of the laboratory experiments does invoke the word “consistently,” it fails to either define this or provide (or even acknowledge the existence of) a margin of error. Nor does the protocol call for a minimum number of data runs, though the text implies that it may have been as low as twenty-five, or in some cases five, tries.

Perhaps even more alarmingly, the memo acknowledges that their scientific method had been criticized, specifically their statistical methods. The FBI dismissed these criticisms, stating “it is generally agreed that the statistical methods properly applied are valid.” The memo then continued its rebuttal by noting that the American Psychological Association (APA) and others hadn’t accepted their findings. The details of this non-acceptance by the APA are withheld by the FBI in their entirety on the claimed basis of protecting “personal information in law enforcement records” and protecting the “internal personnel rules and practices of the agency.” 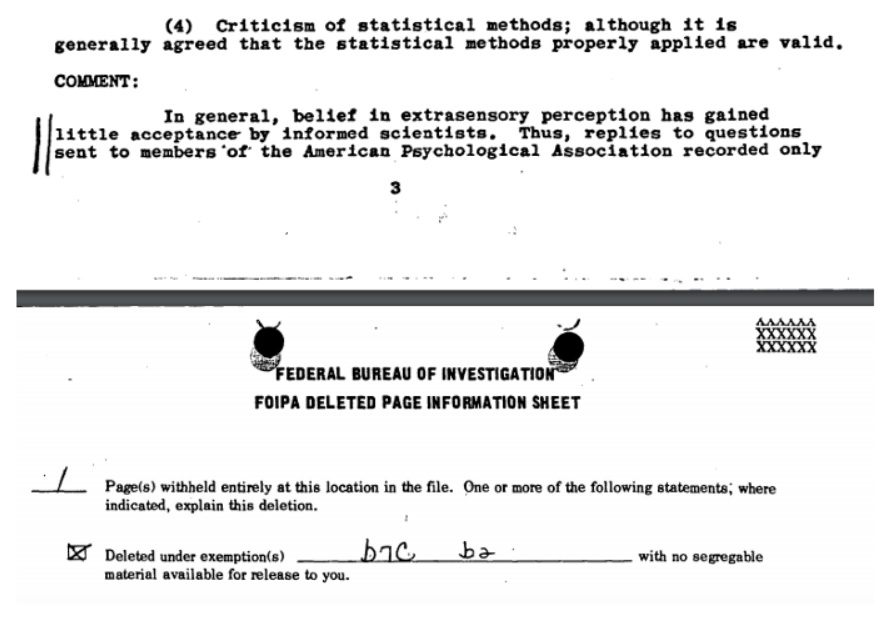 The results of these laboratory tests were and how the FBI interpreted them remains unknown, as the files were excluded from the FBI’s release. Considering the interest of the Army and CIA in the FBI’s psychic research, whatever their results were likely helped justify the future course of the Intelligence Community’s research into psychic perception. Were those programs enabled by a basic misunderstanding of how math works?

You can read the released file below.