Police psychics have so saturated popular culture that the concept borders on the cliche, to the point that the genre has been largely replaced by deconstructions of the trope such as The Mentalist or Psych. There was a time, however, when the Department of Justice took the matter very seriously - not only were instances reported of the police using psychics, there were studies on the matter and even guidance issued by the DOJ.

Naturally, CIA grabbed a copy of the guidance and a copy was subsequently released in the CREST archive.

DOJ quickly reduced the issue to the two obvious questions: 1. Have psychics successfully aided investigators in cases? 2. What should an investigator expect if he chooses to involve a psychic in a case?

To try to address these questions, DOJ cast the widest net they could and contacted 11 police agencies about their use of psychics. This even included one agency whose use of a psychic hadn’t been mentioned in newspaper accounts. Between the 11 agencies, only four different psychics had been consulted. In a later footnote, the DOJ paper notes that three of the four psychics were women.

As for the accuracy of the psychics, the results were fairly notable. Eight of the eleven officers contacted reported that the psychic had provided “otherwise unknown information which was helpful to the case.” In three of those eight cases, missing bodies were found in areas matching the descriptions offered by the psychic. Since the incident was known to the FBI, it is likely that one of these instances was the Melanie Flynn case, described in Sally Denton’s The Bluegrass Conspiracy.

The remaining three officers found the psychics less helpful, however. Two reported that the information was accurate, but “too general to be of assistance”; the third said he had “little success and would not use a psychic again.”

The DOJ paper concluded that while psychics had “provided valuable assistance”, that questions still remained. When and how would an investigator select a psychic? How do they work and what do they charge? The bulk of the DOJ’s paper dealt with these questions. Other questions were reserved for a series of studies being conducted by the Los Angeles Police Department, the first of which was to be published in the Journal of Police Sciences and Administration.

There was apparently some debate on when to call in a psychic. While a few seemed to advocate the more conservative approach of not going to a psychic until all other avenues had been pursued and extinguished, an apparent majority reported the opposite conclusion - as soon as a case was seen to be unusual or difficult, a psychic should be consulted. According to the officers interviewed, this was because the psychics could do two things: they could either widen the scope of the investigation …

or narrow it down, depending on what the officer needed.

The DOJ guide argues that the most difficult and important step was selecting a psychic. There were no criteria for this, and the paper’s author conceded that a “bad choice might be more of a hindrance than a help.” In many cases, though, the choice might be made for the officer. Families of missing persons were known to hire psychics, who the police officer could then evaluate and “determine if she can be helpful to the case.” Failing this, recommendations and word of mouth was seen as the the most important factor in choosing a psychic. However, the paper warned that a psychic who had simply done well in laboratory conditions might not be helpful in a criminal case. (Sorry, Uri.) 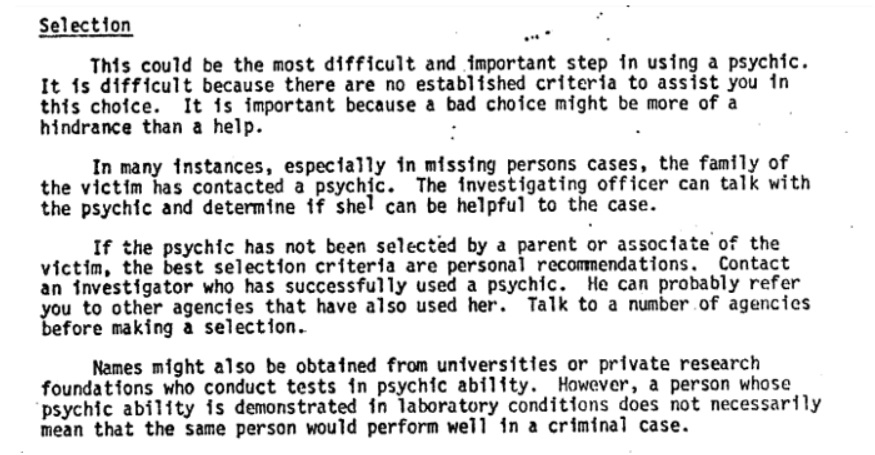 The DOJ then felt it necessary to avoid psychics who were uninterested in solving the case as opposed to seeking fortune or fame. According to the paper, “psychics who are primarily interested in using their ability to help others wish to remain anonymous.” Those who reached out over the phone, however, should be able to verify their abilities by providing information that hadn’t already been publicized. Notably, no guidance was given on verifying that the “psychic” hadn’t been in touch with witnesses and gotten information from them or other sources.

As the guide began to discuss how the psychics worked and performed, it began to describe the techniques used in mentalism, a form of stage magic and fortune telling that mimics psychic abilities through cold reading. Although the flavor and spin of the presentation of these techniques varies, they are the same as those used by con artists and spies to gain information from people and manipulate them.

In the first such instance, the paper’s author unwitting describes what’s known as “shotgunning information,” a technique wherein someone throws out a lot of information, facts, impressions, or details in a short period of time. Using feedback from the audience/participant/subject, they determine what was accurate or relevant and build from there. By throwing out a lot of information at once, and often more quickly than can be processed, mentalists only need one or two “hits” because those are what people remember. This effect is amplified when someone is overloaded with information, as the “nonsense” is quickly forced from someone’s brain which is able to hold onto only the relevant details among the deluge.

Viewers of shows like Psych will be familiar with the idea of someone mimicking psychic abilities by talking fast and seeing what sticks. To the author’s credit, the paper does later warn investigators to limit the amount of feedback offered to psychics.

The initial advice offered is simple police procedure - don’t reveal too much of the case, don’t let evidence become contaminated and communicate with sources by phone or in person as needed.

The two examples of information provided by psychics are both rather general, though the paper mentions that psychics sometimes give “exact names and locations.” Disconcertingly, however, the DOJ paper describes both pieces of general information as clues rather than leads and that they both “require further investigation.” [emphasis added]

At other times, the DOJ paper argued that the information offered by psychics might “need interpretation.”

Since the courts would not admit psychic testimony, cases had to be “reconstructed using established police procedures before presentation in court.” This is a concept known as parallel reconstruction.

The paper concluded by listing a few areas where psychics might be helpful. It also warned that since “even talented psychics cannot be 100% accurate all the time” and not all of the information would be pertinent, it would be up to the investigators to cherry pick the relevant and useful information. 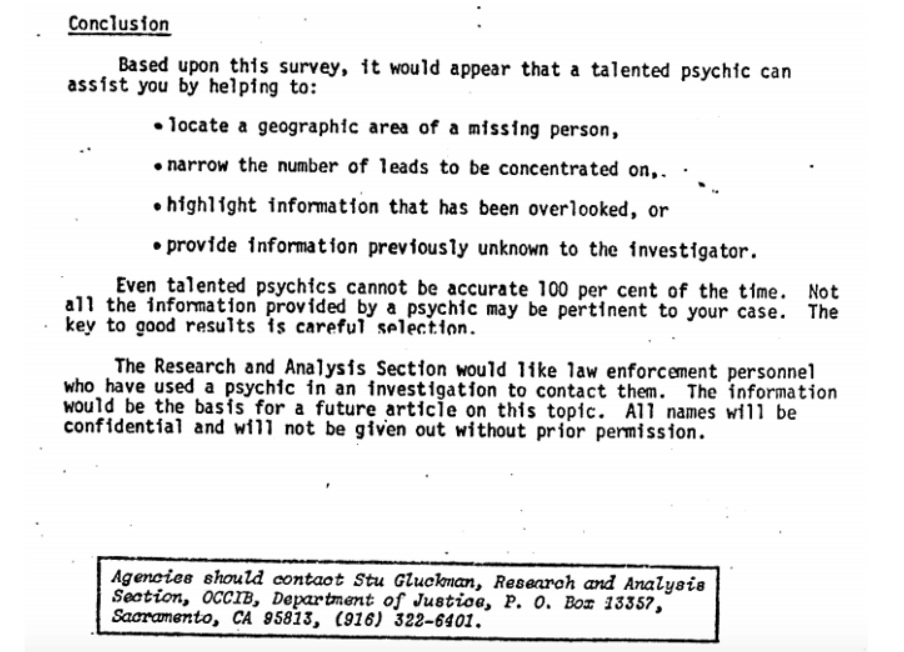 You can read the DOJ’s guide on the Use of Psychics in Law Enforcement below.