President-elect Donald Trump’s calls for a database and “extreme vetting” of Muslims has understandably alarmed civil rights and Muslim organizations - but left unsaid in much of the discussion of Trump’s proposed policies toward Muslims, however, is any recognition of just how much these policies will depend on programs already established by the Obama administration.

President Obama may have recently relented to pressure from over 200 organizations to dismantle the National Security Exit-Entry Registration System (NSEERS), which could have formed the basis for Trump’s proposed Muslim registry, but his administration has aggressively promoted Countering Violent Extremism (CVE) programs across the country. Under the incoming Trump administration, these programs will likely be rebranded, dropping any pretense that the targets are anyone but Muslims.

There are a various CVE programs that have been developed and implemented by local, state, and federal government agencies along with programs that are supposedly “community-led.” While these programs differ in their priorities, there are some common objectives:

Of these, the first two objectives have proven to be the most controversial, and for good reason.

There are no indicators that can help predict which individuals may become violent extremists, a point that was admitted in early discussions of the Working Group which drafted Boston’s CVE framework. 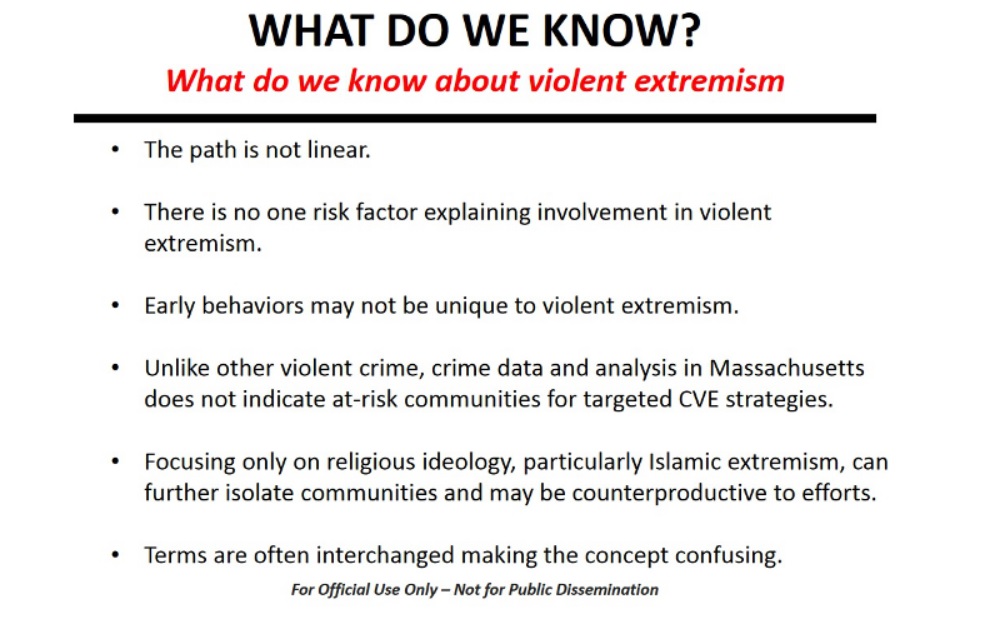 Moreover, the majority of people who hold extremist views never actually carry out violent acts, making the link between extremist ideology and violence untenable. Despite the obstacles posed by academic research, government agencies and community organizations have nonetheless attempted to develop various criterions for identifying individuals at risk of becoming violent extremists. Instead of focusing on nonexistent indicators which can help predict who will become a terrorist, the focus has now shifted to vague “risk factors,” many of which are common to millions of people and raise significant civil liberties concerns.

A rating system developed by the National Counterterrorism Center, for example, includes categories such as “Expressions of Hopelessness and Futility,” “Parent-Child Bonding,” and “Connection to Group Identity.” A low score in any of these categories will get subjects marked for “susceptibility to engage in violent extremism.” One 2012 study supported by the Department of Homeland Security identified “unobserved spaces” for youth as a risk factor for radicalization. In Montgomery County, MD, the World Organization for Resource Development and Education (WORDE) has developed a “multivariate, cluster-model approach” based on five key factors: ideology and values, political grievances, psychological disorders, sociological motivators, and economic factors.

WORDE’s 2014 application for a grant from the Department of Justice’s Community Oriented Policing Services (COPS) revealed that more than 25 individuals had been identified as susceptible to violent extremism between September 2013 and June 2014. The reasons noted were homesickness, suffering from “acculturation related stress, feelings of alienation,” and having “economic stressors in their family.”

There are also concerns that government agencies will develop a sprawling network of informants constantly on the lookout for ideas and behaviors deemed to be “risk factors,” resulting in the surveillance of targeted populations. These concerns are not theoretical. The FBI’s plan for Shared Responsibility Committees (SRCs) proposed “groups of community leaders and FBI representatives who could discuss cases of specific youths.” SRCs were criticized for “institutionalizing an informant system” and plans for their development were later dropped. Shortly afterwards, SRCs reemerged as “local intervention teams” in the White House’s updated Strategic Implementation Plan.

The FBI’s guidelines on Preventing Violent Extremism in Schools similarly envisaged “students, teachers, counselors, and health professionals” spying on their students and acting “as puppets of federal law enforcement.” A similar program has long been implemented in British schools and the evidence is not reassuring. According to a report by Rights Watch UK, the program “stigmatizes Muslim students, stifles creativity and free expression, interferes with the right to education, undermines privacy, and may actually promote the very extremism it seeks to curb.”

The effects of surveillance initiatives aimed at detecting suspicious thoughts and behaviors have been established by various studies. As authors of one study on NYPD surveillance of Muslims concluded, “Surveillance has chilled constitutionally protected rights - curtailing religious practice, censoring speech and stunting political organizing.” 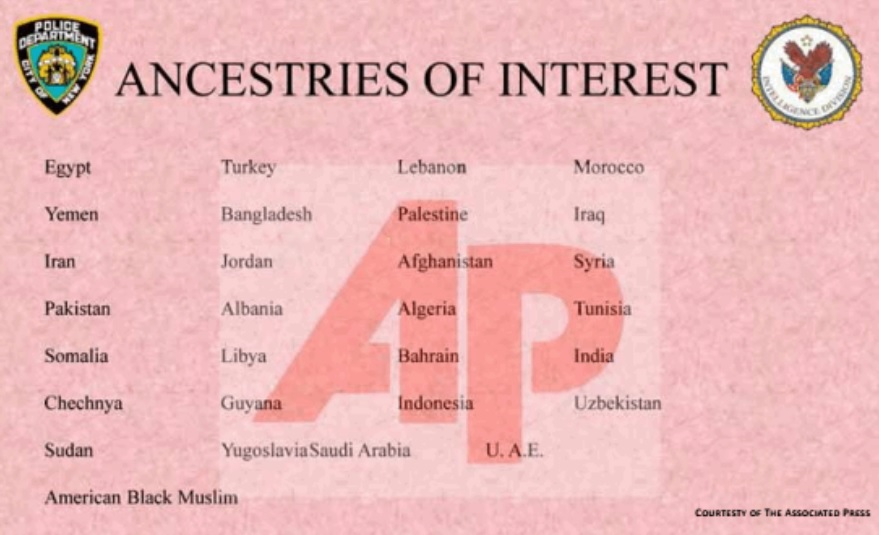 CVE programs are likely to produce such effects nationally.

In March 2016, $300,000 of federal and private funding was allocated to six groups in Minnesota working on mental health and after-school sports with the state’s Somali American population. The government’s interest, however, was less in helping Somali Americans than in preventing community members from becoming terrorists.

The funding was made available as part of the state’s CVE initiative called Building Community Resilience. It sought to address the “root causes” of “radicalization” which it identified as disaffected youth, disconnect between youth and religious leaders, internal identity crisis, community isolation, and lack of opportunity. Addressing these root causes, it was believed, would successfully prevent community members from becoming violent extremists.

Such funding stigmatizes those it claims to help, identifying Somali American communities as sources of violent extremism. It also undermines the economic needs of these communities and subsumes them under the rubric of national security. Lack of educational and employment opportunities are no longer issues concerning social services when they afflict Muslim communities. Instead, they begin to be seen as national security threats.

The West Bank Community Coalition, a neighborhood organization for Cedar-Riverside in Minneapolis, pointed out in a statement that

“to address a social problem through a law enforcement lens” only exacerbates the social problem. “We deserve … to receive those social services,” the statement continued, “the same way every other Minnesota community receives them - through the state departments of Health, Human Services, Education, Employment and Economic Development, and so on - not through law enforcement agencies like the Department of Public Safety.”

Sahar Aziz, Professor of Law at Texas A&M University School of Law, made the same point in her testimony to the US House Committee on Homeland Security, arguing that funding should be managed by “institutions whose missions are to develop communities, not prosecute and incarcerate individuals based on racial and ethnic stereotypes.”

There is no reason to believe that such provision of social services through law enforcement agencies will achieve its stated goals. Even Andrew Lugar, the US Attorney for Minnesota, is unsure about whether the programs would achieve their stated goal. “We had to try something that would at least help the community,” he told NPR. “If it helps lessen terror recruiting, obviously that was the goal, but if it didn’t, it was still good for an important and vital part of the overall Twin Cities community.” It remains unclear whether all government investment is modeled after such sound research.

A few weeks after Donald Trump’s election victory, senior officials from the Department of Homeland Security (DHS) expressed concerns that the Trump administration would rebrand CVE programs as “countering radical Islam.” One senior DHS official told POLITICO that this could “destroy relationships it took so hard to build with communities.” Katharine Gorka, a Trump landing team member, told officials involved in DHS’ CVE program a few days later that the Trump administration was likely to rename the program to Countering Violent Jihad or Countering Radical Islam.

Some Republicans are already pushing for such a change. House Homeland Security Committee Chairman Michael McCaul recently called for the incoming Trump administration to “repeal and replace” President Obama’s “failed, politically correct” CVE program and instead “target the specific threat we face from radical Islamist terror.”

Republicans under Trump may target Muslims more aggressively than even the Obama administration but CVE as it actually exists has already been overwhelmingly focused on Muslim Americans. In Massachusetts, for example, most of the federal money was recently awarded to Somali organizations.

CVE initiatives are now emerging in cities across the country with increasing frequency, often without any public discussion or community knowledge. According to notes from the Homeland Security Advisory Council’s (HSAC) December 1, 2016 meeting, the DHS CVE grant program received over 200 applications from 42 states and territories. The meeting included a discussion on developing the architecture for CVE in all 50 states in order to move forward in the next administration.

The $10 million grants have yet to be announced but they underscore the challenges Obama’s counter-terror will continue to pose into the Trump administration, likely unencumbered by its “politically correct” language and narrowly targeted against Muslims.

Waqas Mirza sent this request to the Department of Justice, Community Oriented Policing Services (COPS) of the United States of America