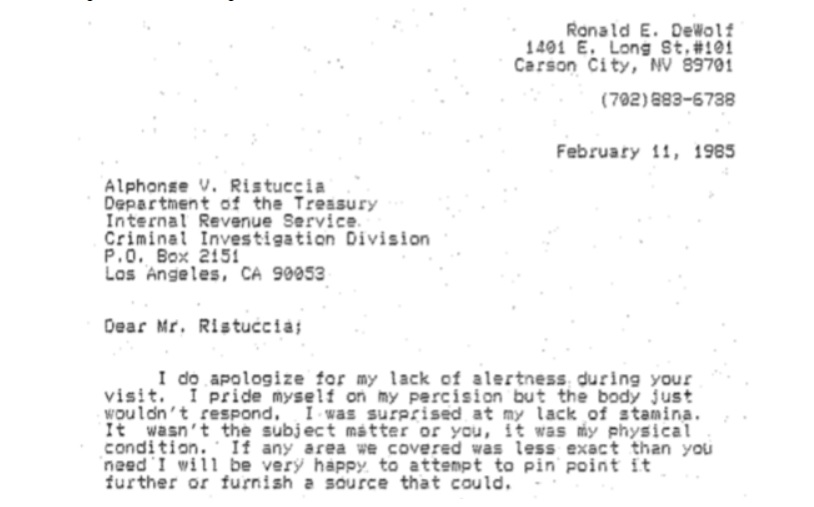 One of the more interesting allegations against Hubbard, and one of the things that prompted the FOIA requests about the Church of Scientology as a whole, was the claim made by one of Hubbard’s children that the founder had sold the KGB access to Scientology records. Combined with Operation Snow White, which saw COS infiltrate large swathes of the government to influence policy and steal documents, the claim was alarming. According to DeWolf in an 1983 interview with Penthouse, one such item sold was

“The plans for an infrared heat-seeking missile in the early fifties. They obtained the information by extensive auditing of the guy who was one of the head engineers. There were great infiltrations clear to this day. There has always been an inordinate interest on the part of Scientology in military and government personnel.”

In the interview, DeWolf didn’t identify the person except as a homosexual Labour Party official from the U.K. Two years later, however, his letter to the IRS, included in his FBI file, does give a name: Tom Driberg. According to DeWolf, Hubbard had a nickname for his alleged KGB connection: Dribble.

DeWolf alleged that Hubbard and Driberg had “held hands … under the table.” It’s unclear if this was meant as a euphemism for dirty dealings or homosexual behavior, though it’s worth noting that DeWolf’s interview in Penthouse had included some questionable comments … including “the British school system fosters lesbianism and homosexuality” due to its gender segregation.

According to DeWolf, Driberg and Hubbard had begun their relationship because Driberg wanted Hubbard “to use his black-magic, soul-cracking, brainwashing techniques on young boys. He wanted these boys as his own sexual slaves.”

DeWolf alleged that through their relationship, Driberg had got the plans for the aforementioned infrared heat-seeking missile. A similar, but distinct, claim was made in DeWolf’s letter to the IRS: that Hubbard had asked him to steal a hydrogen bomb.

In the Penthouse interview, DeWolf alleged that L. Ron had told him that he “was allowing the KGB to go through our files, and that he was charging £40,000 for it.”

There are, however, some reasons to doubt DeWolf’s claims. He is known to have been a troubled individual, and according to his own letter to the IRS he would “fictionalize” things at times, “with great purpose and with great care.”

Elsewhere in the letter, DeWolf says that he purposefully puts “outrageous statements” into some of his letters, bringing his allegations further into question.

DeWolf’s animosity towards his father, which is understandable simply because of who he was, was further colored by the estate issues that DeWolf had faced. At the time, DeWolf wasn’t even aware if his father (who was in hiding) was alive or not.

COS of course, strongly denied the allegations and went as far as releasing letters about Hubbard’s allegations of Communist attacks against him, along with his desire to provide the FBI with fingerprints and loyalty oaths from members of his organization. These letters were previously discussed after they were released by the Bureau in response to the FOIA lawsuit. This offer was made at approximately the same time that Hubbard was alleged to have been helping Driberg and the KGB. In addition to this and DeWolf’s credibility issues, the Mitrokhin Archive also casts some doubt on the allegations.

While Vasili Mitrokhin’s and Christopher Andrew’s The Sword and the Shield - The Mitrokhin Archive and the Secret History of the KGB mentions Driberg a number of times, there is no mention of Hubbard, Dianetics or Scientology. Others, such as Jeff Sharlet, have disputed the method of Driberg’s alleged recruitment, arguing that his homosexuality was too much of a known quantity to have been used as blackmail against him. CIA’s declassified database mentions Driberg a handful of times in open source records, none of which seem to connect him to Hubbard or Scientology.

Perhaps most significantly is that it currently appears that the FBI, despite having been made aware of the allegations (as shown by their possession of a copy of the letter), do not seem to have investigated them. If the Bureau had taken the allegations seriously, it undoubtedly would have prompted an investigation. A new FOIA request has been filed specifically on this matter, however, and a separate request has been filed for the FBI file on Tom Driberg. For now, however, these particular allegations against Hubbard remain unconfirmed.

You can read a copy of the letter below, or on the request page.