Recently released Federal Bureau of Investigation files show that just over a year after L. Ron Hubbard created the the Hubbard Dianetic Research Foundation, a precursor to the Church of Scientology, he offered to become an informant for the Bureau, and provide the FBI with a list of its members and copies of their fingerprints.

While previously published books have mentioned part of this, significant details are disclosed in recently released FBI files as a result of a FOIA lawsuit jointly brought by the author along with Radar Online, represented pro bono by Dan Novack. While the books describe Hubbard’s willingness to throw certain members of his Dianetics Foundation under the bus, the FBI’s files show that his paranoia left him more than willing to provide the Bureau with information on every member of his foundation, including fingerprint cards. While this was ostensibly done in the name of fighting Communism and rooting out any supposed Communist subversives that had made their way into his group, the context leaves no doubt that it was in response to his wife leaving him and accusations that he had kidnapped and drugged her.

While the initial letter from Hubbard only offered a handful of names, it promised that he would follow-up soon, mentioning that the Foundation had recently decided to fingerprint its members and require they sign an oath of loyalty to the U.S. Government, which COS would later infiltrate and attempt to undermine while stealing classified files and other government documents.

According to an FBI memo dated March 7th, 1951, Hubbard alleged that one of the Communists had been “instrumental in driving Hubbard’s wife, Sara Elizabeth Northrup, to the point of insanity.” Insanity, to Hubbard, apparently meant attempting to leave him and terminate their marriage.

According to the same memo, Hubbard told the Bureau that “Dianetics can be used to combat Communism” through unspecified means.

The FBI would later receive an anonymous note building off of Hubbard’s claim, asserting that Communism was an “illness” which Dianetics could cure. The letter signed by Hubbard doesn’t seem to explain why he was unable to “cure” the suspected Communists within his organization, or why he needed the FBI’s help.

The FBI memo citing the anonymous letter noted that there was some “individual” Communists within the Foundation, the activities of which were “of particular interest to sexual perverts and hypochondriacs.”

This seems to refer to letters the Bureau had received the previous year, alleging that the “Dynatic [sic] Club” was a Communist cell. According to this warning, members of the Foundation would “make contact with perverts in Government employment” and threaten them with exposure “unless they furnish information.” “Perverts in government service” refers to both an underexamined part of McCarthyism and the associated Lavender Scare, with the term “pervert” being applied to anyone who wasn’t cisgendered or heterosexual.

Another FBI memo notes that Hubbard attempted to give credence to his claims and the utility of Dianetics by asserting that he had been “psychoanalyzed” in Chicago and “found to be quite normal.”

Within a few days of Hubbard’s letter to the Bureau, J. Edgar Hoover wrote back to Hubbard, thanking him for the information he had provided while declining his offer to accept fingerprints of Hubbard’s employees. Hoover’s letter noted that the Bureau had no authority to handle fingerprints unless they were provided by law enforcement or other state and federal government agencies. 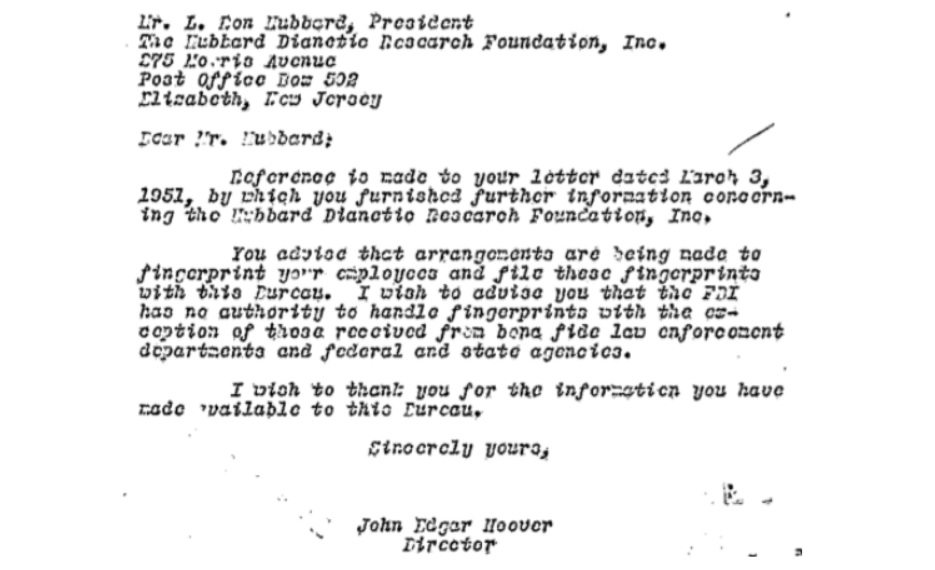 By this time, however, the Foundation had already issued its directive requiring employees, staff members, and auditors to sign the loyalty pledge and provide copies of their fingerprints. The letter stated that there was “a world conflict against Communist tyranny” and that Dianetics was extremely American. According to Ronald DeWolf, Hubbard’s son, Hubbard would not only later steal classified documents from the U.S. Government, he sold secrets to the KGB. 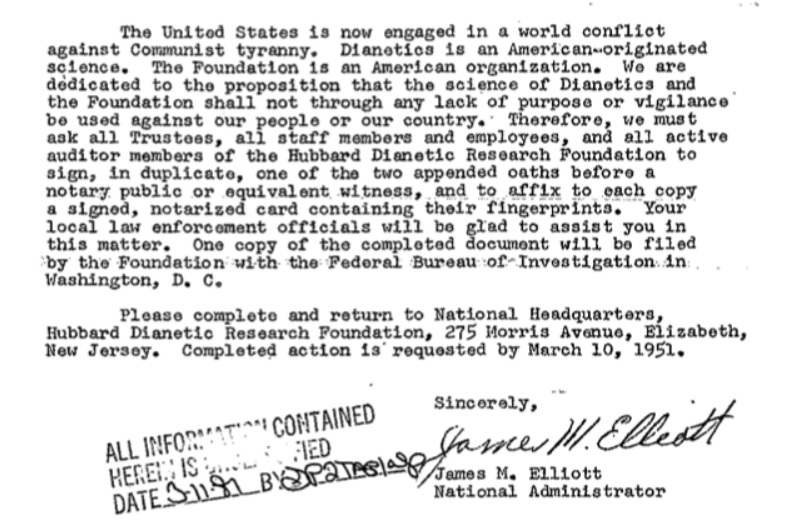 While the FBI refused the fingerprints offered by Hubbard, they did investigate some of the accusations - specifically whether or not the Foundation was being used to influence “patients” to join the Communist Party.

Within a few months, the Bureau had received new accusations alleging that the Foundation had taken part in sexual exploitation.

The FBI apparently felt that the accusations of sexual slavery didn’t describe a violation of federal law, but that the Bureau would continue to receive inquiries and so they should save the information anyway.

Shortly after this, the Attorney General received a letter from Hubbard alleging that Communists had “wiped out a half a million dollar operation” of his. They had also, according to Hubbard’s claims, cost him his health and interfered with “material of interest” to the U.S. Government.

Hubbard’s letter went on to assert that he was “basically a scientist” in atomic theory, because he had studied in in college. He then “followed this into the fields of human thought” and “identified an energy.”

Hubbard’s letter went on to describe Sara Northrup Hubbard (later Sara Northrup Hollister) as his “alleged wife” before offering an explanation for how the Communists supposedly “cost him his health.” According to Hubbard, he returned to New Jersey and “was slugged” while sleeping in his home. As Hubbard admits, he had “no proof” but “was thereafter in poor health.” This would be one of the most straightforward examples of (likely nonexistent) attacks that had been committed against him and blamed on unknown Communist agents.

Hubbard’s letter went on to describe several other alleged attacks that took place in his home. According to one highly improbable description, he was “knocked out, had a needle thrust into [his] heart to give it a jet of air to produce “coronary thrombosis” and was given an electric shock with a 110 volt current.” Hubbard claimed that this was “all very blurred” and that there were no witnesses, though he implied that his wife (apparently no longer alleged) was responsible for this. He doesn’t explain how he knew what the alleged voltage was, nor does he describe seeing a doctor.

The letter went on to make a number of other claims, including that he was working on psychological warfare for the Department of Defense, with the implication being that the Communists were desperate to impede his work (but somehow unwilling to simply kill the man).

While describing his non-existent proof as “slight”, Hubbard urged the AG to take his claims seriously, asserting that “Dianetics is important politically” because “it indicates ways of controlling people.”

Hubbard’s letter to the Attorney ended with a plea for help, and a reassertion that he wanted to work with the DOD on psychological warfare. 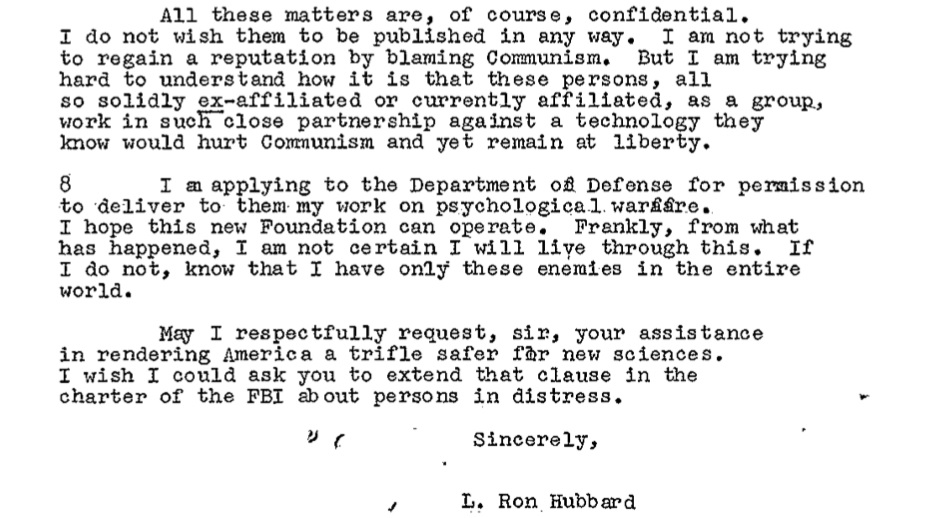 The Bureau quickly reached its conclusion. In the (problematic and rather nonclinical) words of the Special Agent who interviewed Hubbard, he was a “mental case.” The FBI’s records also seem to contradict some of the claims of Hubbard’s letter, such as his assertion that Hollister was responsible for the charges that Hubbard had kidnapped his wife. According to the FBI’s records, these charges were actually brought by Hubbard’s wife herself.

As part of her divorce, Sara Northrup Hubbard (later Hollister), had to sign a statement asserting that Hubbard was “a fine and brilliant man” and that she only wanted to be left alone. 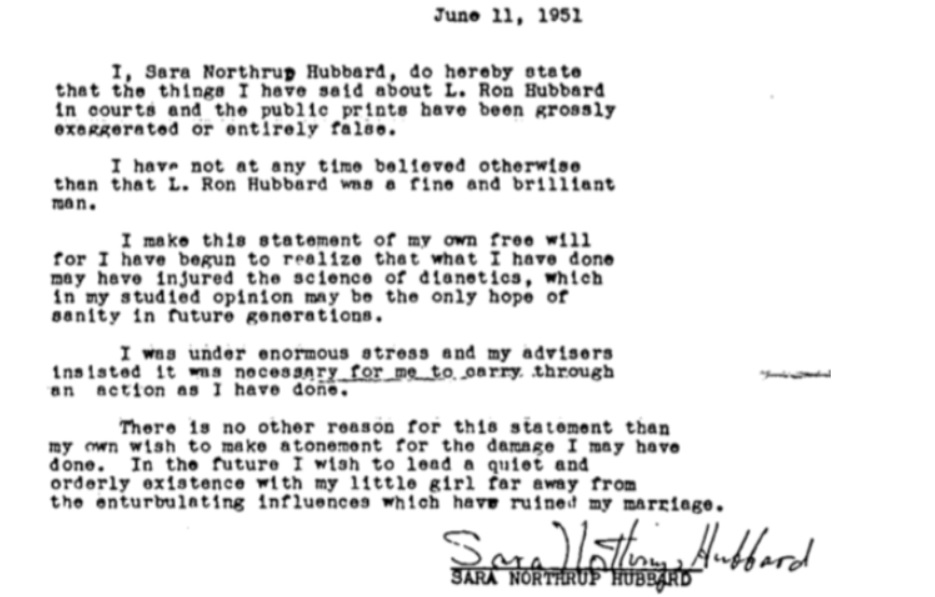 One can hardly blame her for being willing to sign something - anything - that would help finally end her relationship with Hubbard, along with the abuse, harassment, and outright torture she had suffered at his hands - even if it meant signing something that would help validate him in the eyes of the public and deflect away from what he had done to her.

Hubbard’s vendetta against his ex-wife, however, wasn’t the end of his attempted relationship with the Bureau. After COS’ formal founding, Hubbard continued to feed the FBI information - including a copy of the blatantly fabricated “Psychopolitics.” The Bureau, for its part, was apparently unimpressed with the misinformation. 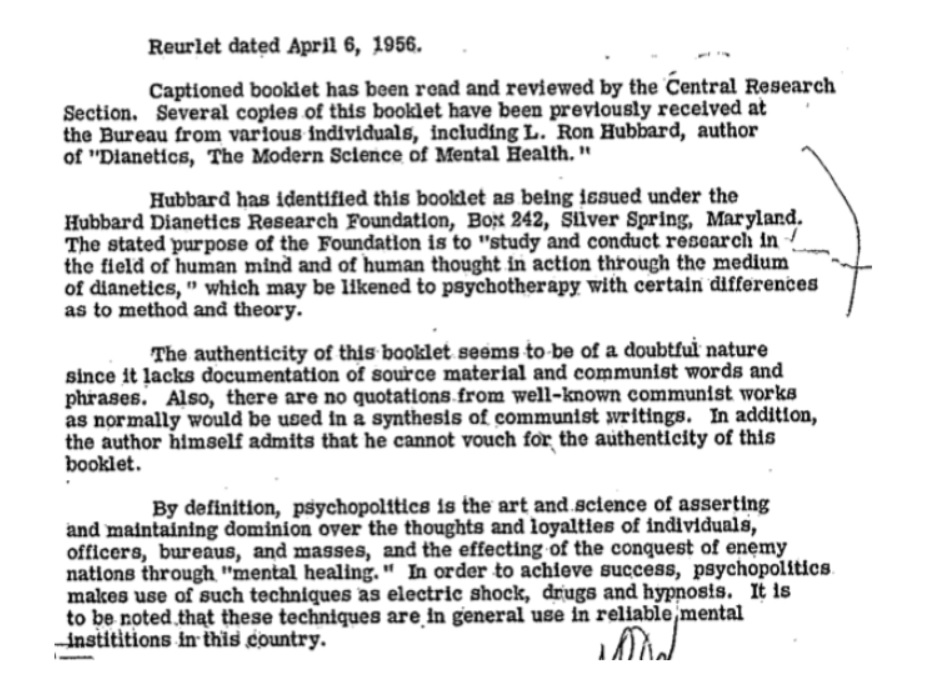 Within a few years of his offer to become an FBI informant, Hubbard’s Dianetics Foundation was forced into bankruptcy, and was essentially rebooted as the Church of Scientology. COS would go on to infiltrate the U.S. Government and sell secrets to the KGB, while continuing to harass and attack its critics and former members.

You can read part of the new release embedded below, and rest on the request page.