While there are reasons to be skeptical about the account put forward by Jowers and those purportedly speaking on his behalf (the question of Jowers’ credibility is complicated by the number of statements made on Jowers’ behalf and not made by the man himself), the Department of Justice’s credibility is strained by their own handling of the case. According to the DOJ’s report, the matter was investigated by three attorneys from the Civil Rights Division and one attorney from the Criminal Division, along with inspectors from the Marshals Service, the ATF, and the Postal Service.

While no one from the FBI was listed as being part of the investigation, it seemed obvious that they would have played a role in it. The DOJ’s report, however, indicated that the Attorney General and FBI Director had ordered the Bureau not to become involved, recusing the FBI “from participating in the investigation because it has been accused of involvement in the assassination.” This logic, however, didn’t apply to Jowers or his allegations. As the DOJ report acknowledged, it was actually tackling “two separate, recent allegations.” The allegations against the FBI were made separately from Jowers, although the two sets of allegations were often brought up together.

Regardless, the FBI’s lack of participation in the DOJ’s investigation didn’t necessarily mean that they didn’t investigate the matter separately or have materials on it. According to the DOJ’s report, “the FBI, the Central Intelligence Agency (CIA), and the Department of Defense also furnished relevant, and in some cases classified, records not available to previous investigations” to the investigators. The fact that the FBI supplied documents made it seem likely that they had looked into Jowers, or the allegations he had made.

To find out about it and to learn more about this and about Loyd Jowers, a FOIA request was filed for:

Records relating to Loyd Jowers (November 20, 1926– May 20, 2000) who was the owner of Jim’s Grill, a restaurant near the Lorraine Motel in Memphis, Tennessee, where Dr. Martin Luther King Jr. was assassinated on April 4, 1968. In December 1993, Jowers appeared on ABC’s Prime Time Live and related the details of an alleged conspiracy involving the Mafia and the U.S. government to kill King. Jowers said that he hired Memphis police Lieutenant Earl Clark to fire the fatal shot. The existence of such a conspiracy, and Jowers’ involvement, was supported in the verdict of a 1998 court case which was brought against Jowers by the King family. The allegations and the finding of the Memphis jury were later rejected by the United States Department of Justice in 2000.

Just under a month later, the FBI responded, and reported having no records. 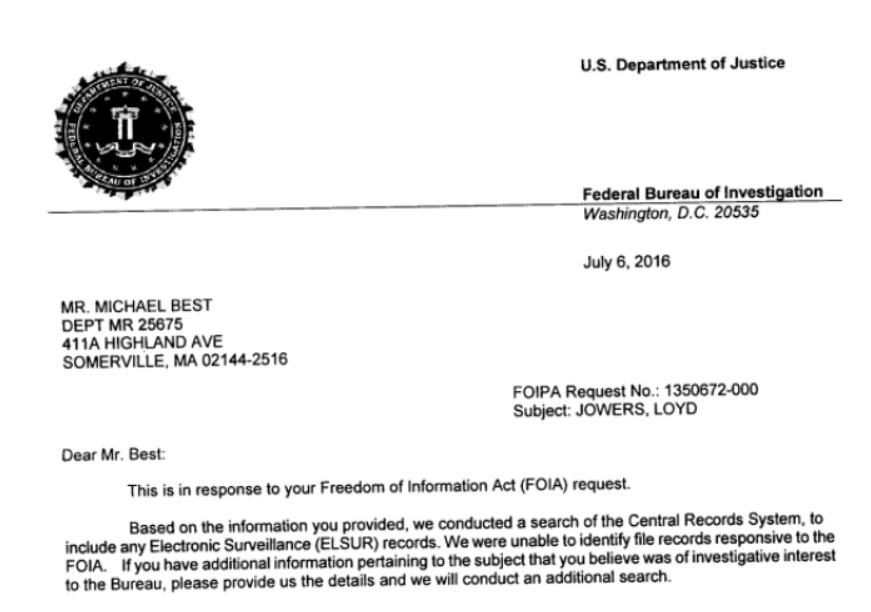 The FBI helpfully noted that if there was anything else that might suggest he was “of investigative interest,” they would be happy to consider it and look again. Beyond confessing to participating in the assassination of Dr. King, being found liable by the court, and being investigated by the DOJ - all of which were mentioned in the original FOIA - there wasn’t much to suggest that the FBI might’ve had an interest in Jowers. The only recorded contact between the Bureau and Jowers was when he, along with many others, was interviewed three days after King’s murder. The 302 form produced by this interview was both short and unproductive. 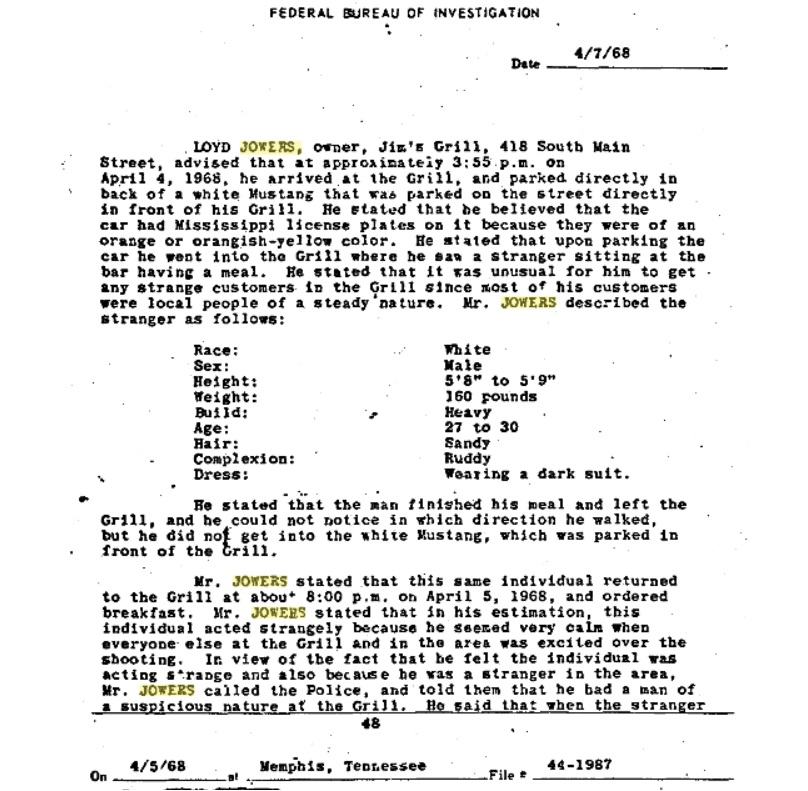 There are, of course, two questions which must be considered separately. The first is whether or not Jowers was essentially telling the truth, or if he was lying for the money (as others have said). This question is significant, especially in light of the court’s finding that the assassination plot involved government agencies. While this allegation is disconcerting, and just reason for an investigation to be conducted independently of the FBI, it is also a good reason to ensure the matter is thoroughly investigated. This is the second question - was the matter properly and adequately investigated?

Regardless of whether recusing FBI from the investigation was justified, the recusal cannot explain why the FBI didn’t look into Jowers during the five years after his confession and before the FBI’s recusal. Their apparent failure to do so is alarming. It’s especially alarming since the DOJ report concluded by acting to prevent any FBI investigation of the matter.

This recommendation came just a few sentences after the report dismissed the suggestion from the House Select Committee on Assassinations and the Shelby County District Attorney General that James Earl Ray might have been aided by co-conspirators (although the Shelby County investigation found “no credible evidence that implicates Loyd Jowers”). As a result of this DOJ report, there would be no further governmental attempts to follow-up on these allegations. If the DOJ’s investigation was inadequate, then its inadequacy sought to become the final word.

As you read, remember the keep separate the question of Jowers’ culpability and the adequacy of the investigations.

Which component is processing the most FOIA requests at the Department of Justice?