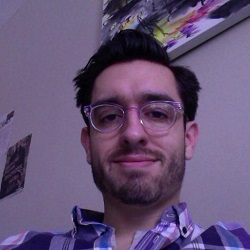 Brandon Smith is a Chicago journalist who covers everything from technology and the environment to startups and policing. His work recently caught the nation’s attention after he persevered (after ten months of fighting and a lawsuit) in getting police video of the Laquan McDonald shooting released.

Shortly after the video was released, the officer who shot McDonald was charged with murder and Chicago’s chief of police was fired. (Editor’s Note: After publication of this article, the head of Chicago’s police review authority also quit, and the Department of Justice announced it would open a civil rights investigation into the Chicago Police Department.)

In this week’s Requester’s Voice, Smith talks about how public records give him a leg up as an independent reporter chasing big stories.

I think I made an initial request in April. It was a little bit more limited than I wanted it to be. I asked for a video showing this incident, and then after a few weeks, I thought, what if there were more videos? So in May I requested all videos that show it or were on the scene, and then I let that sit around for a month or more.

In Illinois, the deadline is 5 business days. If the request is significantly difficult to fulfill, they get to take an additional five at their leisure. So two weeks really. And they delayed it couple months, and they eventually denied me in early August.

So I filed suit with the help of my friend Matt Topic. His entire practice is FOIA suits, news reporters and companies.

What was going on between April and August?

They kept saying they were working on it, which didn’t make sense considering they already had the five files they had to send me. They had already submitted them to various entities, including all the law enforcement entities investigating the case as well as the lawyers representing the victim’s family.

Why it took months for them to produce that, I can’t say. It doesn’t make sense logistically. But if you think about, well, maybe they wanted to delay it, then that makes plenty of sense.

What inspired you to file this request, and to be so persistent about it?

A friend of a friend looked me up because he knew I had filed one FOIA suit in the past. His name is William Calloway, he’s an activist in Chicago and he works with families of victims of police violence. He read Jamie Calvin’s story, in Slate, [that said] Laquan had been shot 16 times.

William read that and said something’s fishy here: Everybody asked for a video of this, and everybody was presumably denied because the video is not out yet, so why don’t we ask, and why don’t we ask a judge whether he or she thinks this should remain hidden. So that’s what we did and the judge ruled in our favor.

Was it hard to come up with a litigation strategy for this?

I approached this lawyer before we even filed the FOIA request, and said we’re going to make this request and we want to sue if we get denied. He took a day or two to think about it, researched the case, and said, OK, I’ll do that, go ahead and file.

He and I had a rapport. We’ve worked worked together on a few requests before, and we even had an open suit for three requests rolled into one.

Crucially in Illinois, there’s a provision that allows attorneys to work on contingency. They can request their attorney’s fees from the state if they win their case. That means that people like me - I’m just an independent journalist, I don’t have a big corporation backing me - we can, if we know a lawyer who is willing to bring it before a civil court, and risk their work product for a short time, we can bring that.

Matt’s fee is relatively modest, despite the prominent nature of his law firm, Loevy and Loevy.

Did you try other avenues to get these questions answered?

I wasn’t really covering the story front to back. There are all kinds of questions about Laquan’s family and the settlement they received. Jamie Calvin has done good reporting on the witnesses that were there, and found one or two witnesses who said they were shooed away from the scene, which is not what you do as as a police officer if you know you’re doing the right thing. You would take statements from the people who were there.

I wasn’t doing all the leg work. I file a lot of FOIA requests, and now that i have a really good reputation with a lot of editors, after this has gone down, I’ll start in the more mainstream, full story reporting, now that people will pay me to do this, which is nice.

For a couple of years, it was me and FOIA. We got to know each other.

How often have you used FOIA?

I think I have maybe a couple dozen FOIAs that I’ve filed in the past year, and maybe half of those are outstanding, something like that, and almost all of them are late.

The city’s given me some things that I’ve asked for and some stuff they haven’t gotten back, but it’s kind of taken a back seat to this Laquan stuff.

As an independent journalist, do you see public records as giving you a leg up or advantage?

Of course. It’s the easiest way to get editor’s ears, when you say I have an internal city document that proves my assertion here. They literally cannot object. If you’re starting out and want to sell a story, it’s the best tool you have.

There is nothing stopping someone from illegally withholding a public document from a requester and just saying they don’t have anything. Unfortunately, we just have to take them at their word most of the time, but I think a lot of FOIA officers are just so busy that they don’t really run things up the chains as their bosses might want them to, and sometimes you just get lucky - they give out things that are really politically damning, as they should, but the politicians might not be so happy.

What kind of tips would you give someone just getting into public records?

The first thing is to find the right news sources to read.

If you’re well informed about the world and issues that you care about, that, in the mind of someone who is interested in public life and the public interest, this always generates questions in your mind - and the questions are possibly answered by FOIA requests.

How do you balance FOIA with other traditional aspects of reporting, such as sources, interviews, narrative?

I’m working with a couple of whistleblowers now who are in law enforcement, and they’re telling me what to ask for with FOIA requests. They’re not giving me documents themselves, because they don’t have access personally, but they know, in speaking with colleagues around the city, things are going on. So they say, “Hey, you should file for this and this, and see what you get back.”

Otherwise I wouldn’t know about these things. Whistleblowers don’t always have to give you documents themselves, they can just point you in the right direction.

What would you say to others in a similar role, how can they use this process to have the most impact?

It all comes down to are you asking the questions whose answers are going to get news stories.

A lot of people can ask a question whose answer is not necessarily a news story, but the way I always think about it is, is this answer going to be a story if they deny me?

Often you can make a FOIA request, where if you get something interesting, it’s a news story, and those are all well and good, but I try to ask questions that are so pertinent to the public discourse, that if the government says no you can’t have something, that in itself is a news story.