Chicago’s air quality is among the worst in the U.S., and there are several local hotspots for particulate matter 2.5 — the tiny particles that come from diesel trucks and industry and enter people’s lungs and blood, causing significant health problems. Our ongoing series on Chicago air pollution can be republished under a Creative Commons license. For more information, click the republish button below.

In mid-July, near 106th and Avenue D on Chicago’s Southeast Side, air pollution began to climb to a level that data from nearby sensors suggest is rare outside of the Fourth of July — historically the city’s worst day for air quality.

On July 21, three different air quality sensors in the neighborhood captured levels of particulate matter — tiny particles of smoke, dust and other compounds that can enter a person’s lungs and cause devastating health problems, including premature death — in the air about twice the level of pollution from the week before.

“This is really concerning, especially in the summer, when there’s a ton of kids outside and people are walking around,” said Gina Ramirez, a resident of Chicago’s Southeast Side and board member of the Southeast Environmental Task Force.

Just a few blocks south of 106th, an air quality sensor installed as part of a Loyola University air pollution research project reached similarly high levels. A few blocks east of that sensor, near Jane Addams Elementary School, a sensor that MuckRock installed last summer at the house of a local family, recorded almost the same spike as the other two sensors. 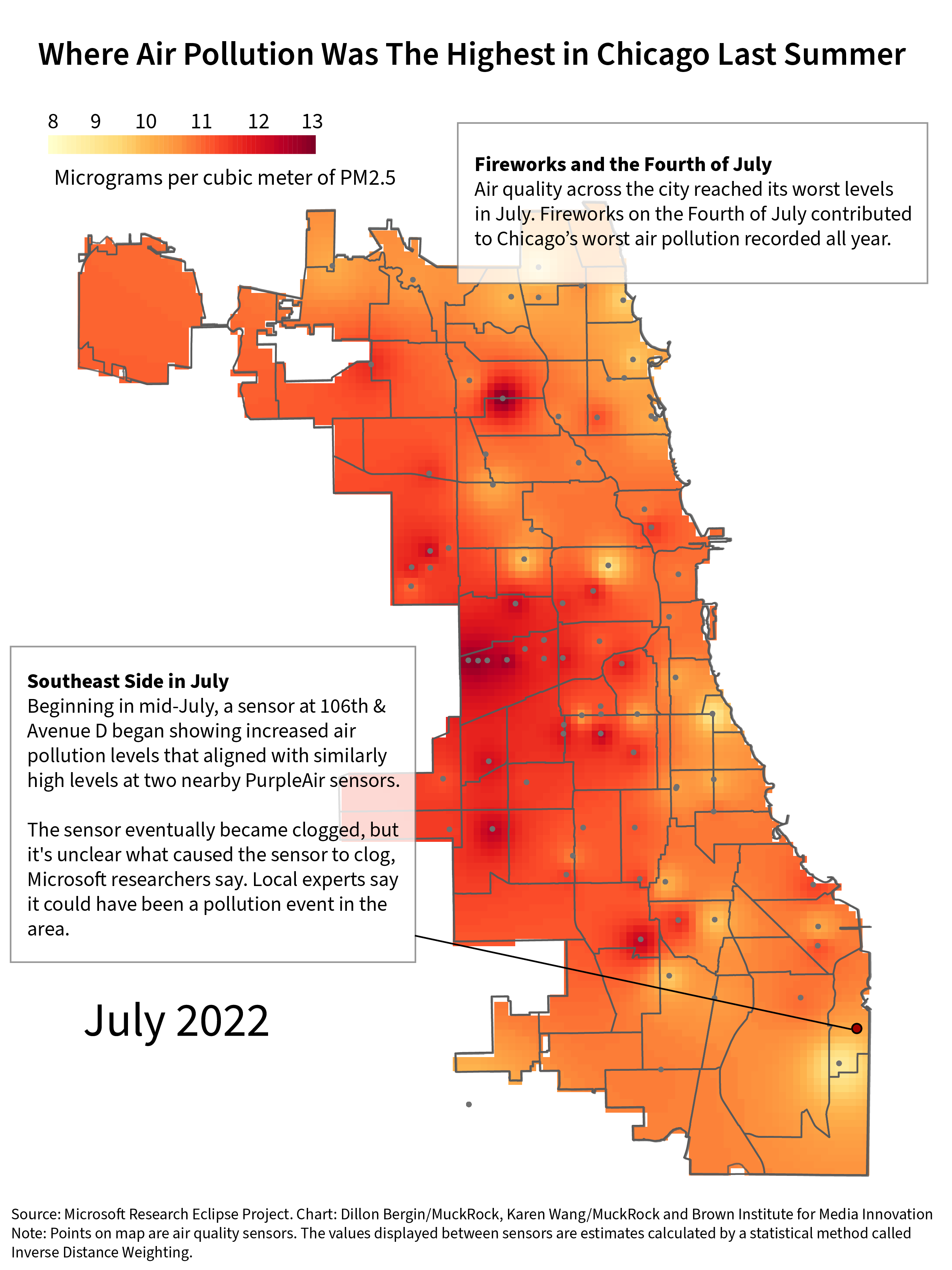 In response to the findings, the Chicago Department of Public Health said in a statement that although they are unaware of any specific pollution event on the Southeast Side in July, they do respond and investigate citizen complaints and inspections of facilities that hold air pollution permits. “We are in the beginning stages of building out a system to actively ingest, analyze and utilize such data,” the department said. The city also said it uses Microsoft’s air pollution data “primarily to monitor trends over time, rather than discrete events.”

The Illinois EPA operates 11 monitors for particulate matter in Cook County. So far in 2022, none of these monitors have detected pollution levels that exceed national air quality standards — defined as 12 micrograms per cubic meter on an annual basis and 35 micrograms over 24 hours, the EPA said in a statement.

Meleah Geertsma, director of environmental justice policy for the Natural Resources Defense Council, a nonprofit environmental advocacy group, said in a statement that although it hasn’t studied the Microsoft sensor network data, “it is not surprising that sensor networks are picking up elevated levels of pollution near industrial areas and associated traffic corridors.”

“Moreover, all too frequently high levels of pollution such as seen here occur in low-income and BIPOC communities, which are also more vulnerable to such pollution,” she said. “Chicago needs to address these systematic disparities and injustices.”

Chicago has allocated more than $1 million of funding from the American Rescue Plan to an environmental impact statement that will provide data on where pollution is coming from and which areas of the city have suffered the most. The agency says the findings will then be used to make changes to the city’s permitting and inspections, land use and zoning, and even transportation planning.

The ultimate reason for the Southeast Chicago air pollution spike in July is, so far, unexplained, researchers and experts say, but Chicago’s 10th Ward, which encompasses several neighborhoods on the Southeast Side, has a long history of pollution from industry lining the banks of the Calumet River. On the other side of the neighborhood, diesel trucks pass through on the way to Indiana and locomotives move freight through the country’s busiest cargo hub, which has led to back-ups and increased pollution during the pandemic.

What you breathe depends on what your ZIP code is

In Chicago, the city’s air absorbs pollution from diesel trucks, traffic-clogged expressways, manufacturing plants handling materials like concrete or petroleum coke, and even fireworks on the Fourth of July. While dirty air is a danger to residents across the city, Chicagoans in areas like Little Village or the Southeast Side live closer to sources of toxic pollution.

Click on the arrow below to see annotations for hotspot for each individual month: 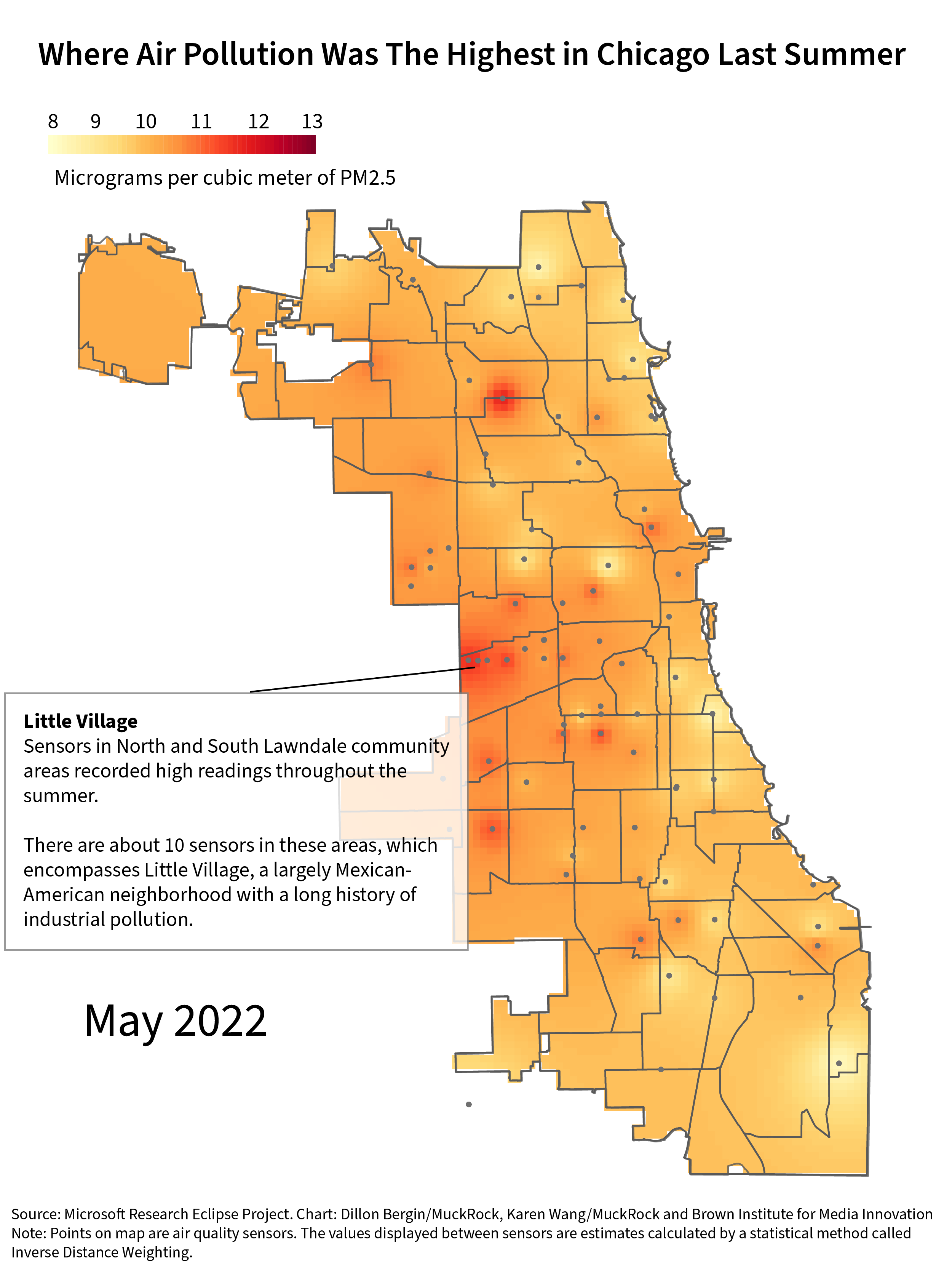 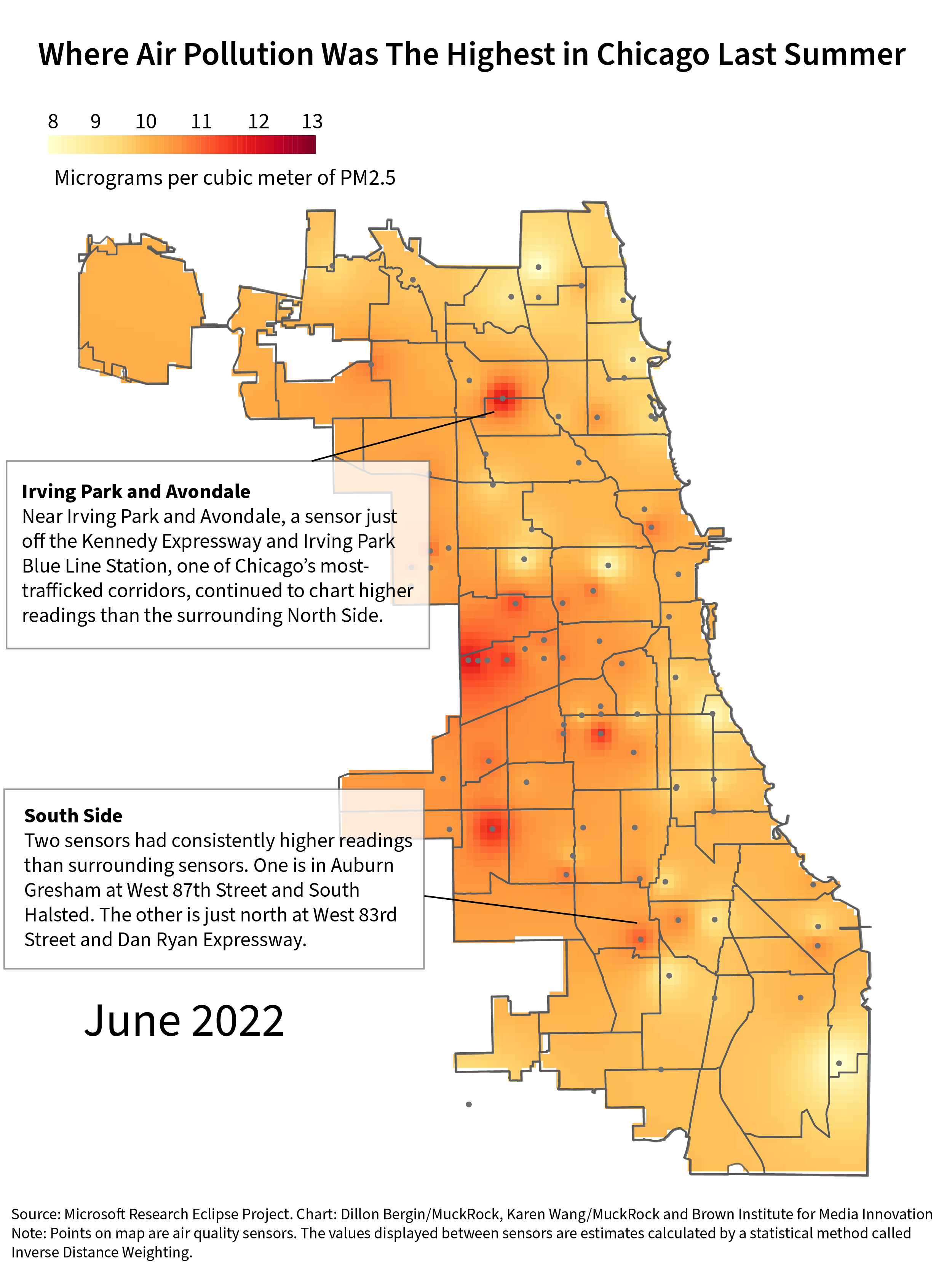 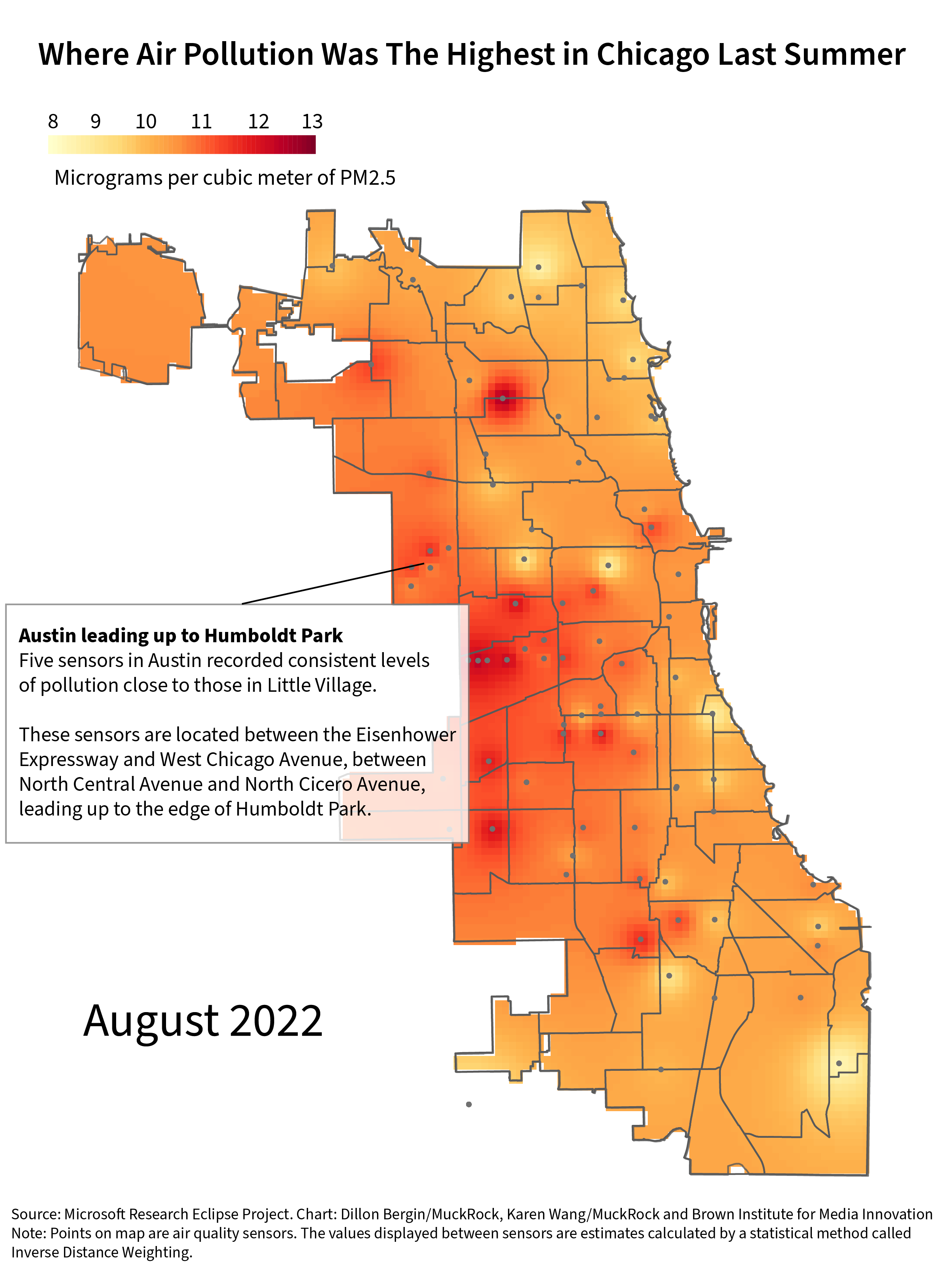 Now, we want to help Chicago keep track of what residents are breathing, especially during time periods air pollution is visibly rising.

As part of a grant through Northwestern University Medill and Google News Initiative’s Data Driven Reporting Project, MuckRock is retrieving daily air quality readings from a network of more than 100 air quality sensors across Chicago. This network of sensors was built as part of a partnership between the tech company Microsoft, the City of Chicago and several community organizations. The data from the sensors is public. At a level of detail that few other environmental studies in the U.S. have reached, the air quality readings from each sensor reveal how the city’s pollution varies by neighborhood.

We know there’s a difference between public information, and information that is easily accessible. The sensors record air quality readings every five minutes, every hour of the day, resulting in millions of rows of data. Getting, storing and cleaning all of that information is difficult and time-consuming. That’s why we’re handling the first few steps of data collection and analysis. Through GitHub Actions, air quality readings will be updated daily and visualized maps will be updated monthly.

If you want to know more about our process and methodology, you can read the documentation in our GitHub repository or a longer write-up of our methodology.

What newsrooms, civic groups and the public can do with Chicago’s air quality data