In one instance recounted in his sparse FBI file, conflict arose in June 1937 when Pyle visited the Bureau’s newly opened field office in Juneau, Alaska. During the visit, Pyle mentioned to the Special Agent in Charge John Bugas that while the management and personnel of his employer, Scripps-Howard newspapers, admired the work of the FBI, they felt “ill will” specifically towards Director J. Edgar Hoover.

The cause of the ill will? Favoring a reporter from another paper.

Pyle went so far as to suggest that this favoritism, and the resulting animosity of his organization, was due to Hoover’s “desire for personal publicity.” That proved to be the last straw for Bugas, who “took rather heated issue” with Pyle’s comments.

Pyle, for his part, took no offense at Bugas’ rebuke, and left the office “in the best of humor.”

Burgas then memorialized the incident for Hoover. While Hoover had infamously thin skin in his later years, the then 42-year old Director apparently took the whole thing rather well, going so far as to send Pyle a personal note thanking him for the coverage a few weeks later after his article came out … 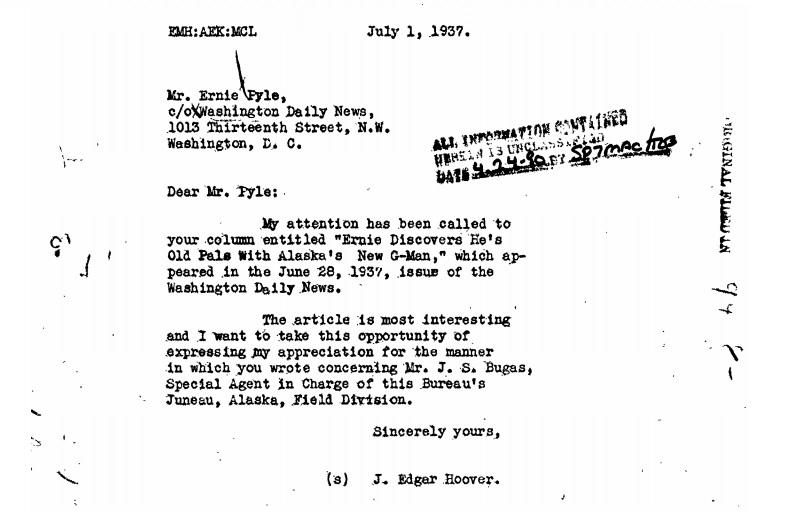 Read the full file, which includes a clipping of Pyle’s article, embedded below, or on the request page.