Under J. Edgar Hoover, one of the Federal Bureau of Investigation’s top priorities was to keep tabs on the director’s critics. Unsurprisingly, the 35-page FBI file on Vidal reads like an enumeration of the liberal author’s slights against Hoover, all of them reported by Bureau agents or Hoover’s fans.

Documents dating from 1960 to 1970 detail a number of criticisms that Vidal voiced against Hoover’s law enforcement priorities, from the FBI’s poor record on civil rights to its persecution of communists and leftists. Despite the author’s busy media schedule and prolific literary output – Vidal is the author of more than 60 books the law enforcement agency apparently tried to gather a compendium of every slight against Hoover.

In one of Vidal’s first clashes with the Bureau, an agent was alerted to a review of The Best Man, Vidal’s 1960 Broadway play, included a joke at the director’s expense.

A special agent was dispatched to a performance the very next night, who reported back that “the crack [about Hoover] came out fast and fell very flat.”

Another agent chronicled that Vidal participated in a TV program called “Hot Line” on WPIX that was “extremely critical of the Director and the FBI in the handling of civil rights cases and bombing cases in the South.”

Observing that “Hot Line” was a new show solicitous to suggestions, Hoover’s Bureau retaliated against Vidal’s remarks by calling for its cancellation:

The Director’s most aggressive act against Vidal was a 1968 recommendation to the Bureau’s New York Office to review the author’s appearance on WNEW show called “Is Liberalism Dead?”

Hoover himself called for the investigation in order to “determine whether there is any possible violation of the Selective Service Act” - an infraction that, if proven, would have entailed enormous legal and/or financial costs for Vidal.

Though the documents date only back to 1960, the Bureau may have eyed the liberal author well before that year, when he unsuccessfully ran for Congress. The FBI file repeatedly notes that Vidal published The City and the Pillar in 1948, a novel that “dealt with the physical adventures of a male homosexual.”

Also included in the file is a 1967 name check, or debriefing, of the author for Mildred Stegall, a loyal aide to President Lyndon Johnson. Hoover’s office sent the White House a two-page letter outlining various aspects of Vidal’s life and work that made him a person of interest to the Bureau, among them his authorship of The City and the Pillar, his protests against the House Committee on Un-American Activities, and his alleged association with the pro-Castro Fair Play for Cuba Committee.

The name check also identifies Vidal as “a ‘friend’ of the ‘Kennedy Clan,’ in that his stepfather was Mrs. John F. Kennedy’s stepfather.” It quotes a Washington Post story in which Vidal, “described as alcoholically exuberant, was requested to leave [a White House party] by Robert Kennedy. Vidal was reported to have stated [in response], ‘I’m going to destroy you.’” 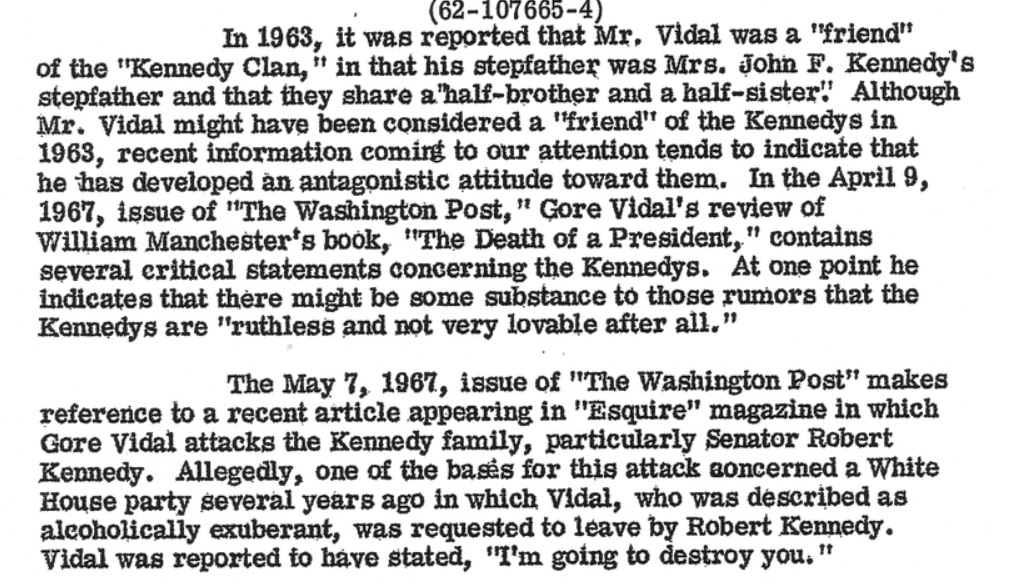 The file includes a newspaper clipping dated a few days after Stegall’s name check, in which the liberal critic is quoted by The Evening Star commenting on Johnson’s policies in Vietnam, “This poor loon we have now thinks of himself as Abraham Lincoln when he’s really a kind of Genghis Kahn.” The same article noted that Vidal called the Kennedys “a rather average clan with a lot of money.”

Image by WikiMedia Commons and is licensed under CC BY-SA 3.0